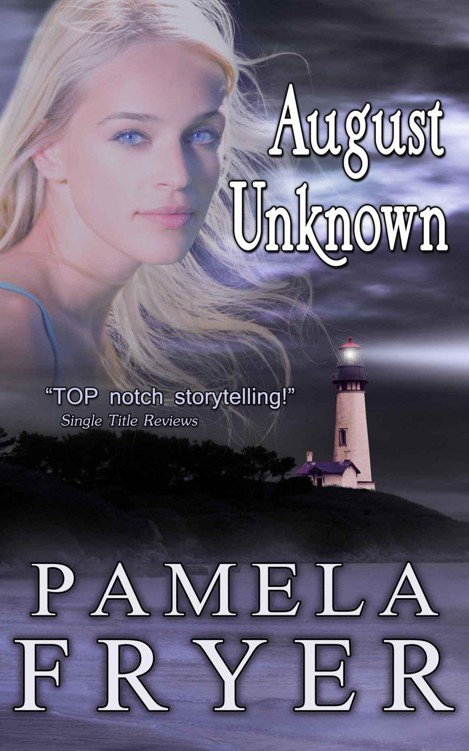 Danger lurks in a past she can’t remember...

She doesn’t know what happened the night of the storm, why she
was walking along the highway without ID, or why she has a fading tan line on
her wedding ring finger, but a dark and terrifying presence haunts the edge of
her memory. Before she can start a new life with the wonderful man who came to
her rescue, she must remember what in her past might take her away from him.

Heartache lies in a past he can’t forget...

Blaming himself for his late wife’s death, Geoffrey Barthlow
has only begun to scrape together the pieces of his shattered life. When Jane
Doe “August” falls into his world, he sees the opportunity to help her as a
chance to heal his own soul. But as he finds himself falling for the beautiful
mystery woman, he knows his heart is once again at risk; she has another life
somewhere that she will eventually remember.

To the real Jeffrey in my life; proofreader extraordinaire and all around super fungi.

This book is a work of fiction. The names, characters, places,
and occurrences are products of the writer’s imagination or are used
fictitiously. Any resemblance to actual incidents is entirely coincidental.

All rights reserved. No part of this book may be
reproduced, scanned, or distributed in any printed or electronic form without
prior written permission from the author, Pamela Fryer.

When I originally wrote this foreword, I had just received
back edits from my mother, an experienced sailor who fact-checked my boating
references. The honeymoon sailing trip mentioned in this book was one she and
my father took on their 95-foot ketch
Sea Venture
. I sent her the whole
manuscript, but she only read the parts I’d marked for her. She returned it
with a note saying she couldn’t wait to read the whole book when it came out in
print. Sadly, she never got the chance, as she passed away shortly before
August
Unknown’s
release. I’d like to take this opportunity to recognize her
contribution. I miss you, Mom!

Now on to the nitty-gritty. For those of you familiar with
Newport, Oregon, I ask that you suspend your disbelief just a teeny bit. While
I conducted extensive research on the beautiful town, I have changed the names
of streets, hospitals, and shops for fiction’s sake. The house with the view of
Yaquina Head in which the Barthlow family lives is real. I stumbled upon it on
a real estate website and fell in love. In fact, the house is part of what
inspired this story. As a born and raised California girl, there is something
mysterious about the rocky Western coastline that enthralls me, and I find
lighthouses, with their noble and haunting purpose, absolutely spellbinding. I
couldn’t help but wonder what might happen in a sleepy little coastal town on a
stormy night after the power goes out, when two wounded souls find each other
in the dark...

The ocean roared in her ears. Waves crashed over her head from
all sides, stinging her eyes and choking her with mouthful after mouthful of
salty water.

Numbing cold dulled her senses. She fought against the water
pulling her down, but struggling only made it worse. In the darkness, she couldn’t
tell which way was up.

She strained to make out the flashes of light rushing across
her vision. A buoy? A lighthouse? Deep rumbling followed. It was lightning, and
dangerously close. A sudden pummeling of rain smacked the water around her like
an eruption of stadium applause.

She was hurt. The sharp stinging at her hairline burned more
intensely with each wave that swept over her aching head. Lightning flashed
again, brighter and longer this time, revealing the depth of the empty darkness
surrounding her.

She closed her eyes to squeeze out the salty burn. She stopped
fighting, letting the ferocious pull of the sea drag her under as she clung to
the hope her lifejacket would bring her up again.

The sharp pain in her head receded to a dull thump. She was
being battered by the pounding surge of the ocean, but the roar in her ears had
faded. It almost seemed they were filled with cotton.

Hypothermia. The idea was terrifying, and...
not so bad
.

She closed her mouth against the bitter salty water, no longer
calling out. She didn’t know who she was calling to. The icy harshness of her
surroundings drifted away and soft, velvety black draped over her awareness.

Her feet hit something. Before she realized what had happened,
the surge tossed her onto a rock-hard beach. Her arm twisted painfully under
her body. She felt as though she’d plunged from a third-story window.

A wave followed, crashing over her with ruthless force. Gravel
churned around her as she was pushed farther out of the ocean’s grip.

Her body weighed a ton, but the relief was intense. She lay
there, gasping out silent thanks, floating at the edge of nothingness.

Another wave crashed over her, jarring her awake. Darkness
surrounded her. It was night, and still storming. As awareness clawed its way
back, she became aware of fat raindrops hitting her.

She forced brittle arms to push herself upright. Pain throbbed
in her icy, numb fingers as she fumbled with the clips on her lifejacket. When
it finally came free, she dropped it behind her and looked around.

There were buildings in the inky distance. She squinted
through the rain. Not a single light shone, but a strange glow in the clouds bathed
the beach in a surreal luminosity.

What is this, an abandoned compound of some sort?

She struggled to stand, only to collapse on her hands and
knees again. The beach was rough, mostly stones and coarse sand. Pebbles stuck
to her palms.

A wave of nausea struck, and mouthfuls of ocean came up, salty
and bitter with bile. She heaved again and again until all that remained in her
stomach was gnawing emptiness.

She stood and wobbled precariously, but this time remained on
her feet. She trembled uncontrollably, and each impossible step jarred her
battered body. Her bones felt like toothpicks about to snap. She was so weak
the gusting wind made her stagger back a step.

The shapes on the horizon were fuzzy, but she was too tired to
focus. She just had to get there, that was all she knew.

What had a moment ago been fat raindrops suddenly turned to
torrential sheets of sharp, icy slivers, knifing into the top of her tender
head. Lancing pain came alive again, strangely familiar, but she couldn’t
remember what caused it.

In the back of her mind, she suspected she was in a ghost
town, headed for ramshackle buildings, but she didn’t care. She had to get out
of this rain and the chilling wind. She wanted to close her eyes so badly, to
sleep, just for a little while. Sleep.

Jocelyn grew bored with the remote control to the compact disc
changer and turned off the music.

“Why does Grandma live at the Mirthful Mermaid?”

Geoffrey Barthlow maneuvered his BMW carefully along the dark
road. As they traveled down the coastal highway from the summer house, the
power had winked out, making the town below literally vanish before their eyes.
He’d never been on the ocean road in darkness like this. Even with fog lamps
and his high beams, the driving rain made it nearly impossible to see. It
sounded like gravel hitting the car.

“The restaurant is her home,” he answered as he slowed to
negotiate a curve. “She’s lived there for thirty-five years.” Gusts of wind
pounded them, but the car held the road beautifully.

His niece was such a precocious child. He loved spending time
with her. His sister accused him of spoiling Jocelyn, but with no kids of his
own and none in the foreseeable future, he did it with gusto, and refused to be
made feel guilty for it.

“This is cool. It looks like
The Fog
.” Jocelyn
stretched up taller in her seat to peer out the passenger window.

Thick, charcoal darkness like Geoffrey had never seen blocked
out the ocean. It seemed the storm sat directly on the surface of the water. At
the edge of the road, the world disappeared.

“I have to stop letting you watch those horror movies.”

“Why?” She looked at him, bewilderment filling her pixie face.
“I’m not scared.”

Geoffrey thought back to the costume she’d fashioned last year
for Halloween. She’d traded two Miley Cyrus CDs for an old Girl Scout’s
uniform. Without help from anyone, Jocelyn had then used red dye and craft
putty to make herself into a dead Girl Scout. His sister had been horrified.

“Your mother is still mad at me for letting you watch
The
Bludgeoning
. She wasn’t happy about that Halloween costume.” He could only
imagine what she’d come up with this year.

“It was just a joke,” Jocelyn said, twisting to peer out the
window again. “Grown-ups are so serious all the time.”

She flashed him that magical smile that reminded him life was
beautiful. “You rock, Uncle G.” Her expression dimmed. “Do you think my mom and
dad will be divorced by Christmas?”

She surprised him with that one, completely out of the blue.
At the same time, he’d known she would ask something like that, sooner or
later.

“They’re separated. Amy Knoeller said that’s just what they
call it before the divorce becomes legal.” Jocelyn settled in the deep leather
seat and stared at her shoes. “Her parents are divorced. She has to live in two
different houses.”

“Your parents are
not
getting a divorce,” Geoffrey said
firmly, even as he wondered himself. Leah and Marc would work things out; they
had to.

This whole family can’t be unlucky in love, could we? Does
the Barthlow curse plague us all?

“Are you ever gonna get married again, Uncle Geoffrey?”

Like a flash of lightning, the painful memories he’d worked so
hard to bury came alive again, as bright and clear as if the accident that
killed Christina happened only yesterday. A vision appeared in front of him,
fuzzy in the sheeting rain, a ghost haunting the highway that had killed her.

The specter of death stared back at him, shadowed, frightened
eyes caught in the ghostly glare of his headlights.
Christina
.

Jocelyn’s ear-piercing scream filled the car, bouncing off the
glass to pummel him from all directions. Too late, Geoffrey realized this was
not the ghost of his dead wife, but another mysterious figure in white, very
much alive.

And he was about to run her down.

Geoffrey’s heart surged into his throat and stuck there. He
swerved and hit the brakes. The BMW slid sideways, and then fishtailed. A
sickening thump filled the car and Jocelyn screamed again. They careened across
the road, and then back to the right side and through a thick clump of salt
grass before crashing against a wooden sand rail. Both air bags deployed, and immediately
deflated.

A stomach-turning moment of confusion passed where nothing
seemed real, as though what had just happened was part of a bad dream. Geoffrey
released his seatbelt and turned toward his niece. Jocelyn had a bloody nose.

“Are you all right, sweetheart?”

Her eyes were wide with horror. “We hit a girl.”

Geoffrey turned off the engine and looked out the back window.
With the front end pitched downhill, all he could see was black sky.

“Stay here.” He opened the door. His senses came back to life
as the shrieking storm slapped him in the face, cold and furious.

He paused. The howling wind drove needle-like slivers of icy
rain into the side of his face. “It’ll be okay.” Sickening déjà vu turned his
insides to liquid.