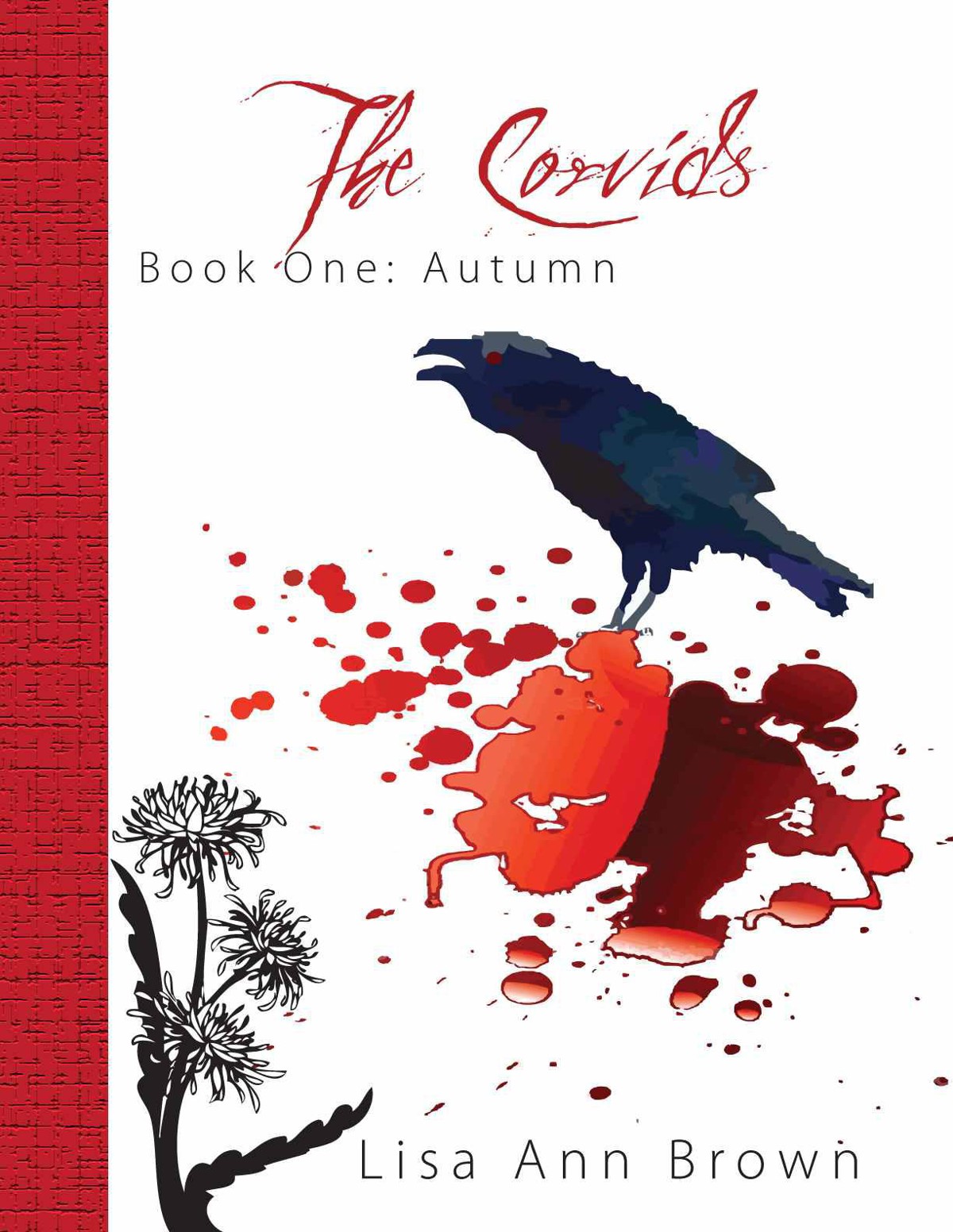 Arabel Spade, a young girl living in the strange and mystical land of The Corvids, determines to solve a brutal series of murders using her unique paranormal abilities. Through her perilous journey, Arabel learns about herself, the dark secrets which stain her family history and the passions and rigors of first love.

NOTICE TO THE READER

THE CORVIDS, BOOK ONE: AUTUMN

The Corvids, Book One: Autumn

By purchasing this ebook you are stating that you are fully aware that you will be sent the ebook or download link via email and that this purchase is NOT refundable. Legally, you can save one copy of the purchased ebook to disk for your own personal use. However, it is illegal to distribute your copy to those who did not pay for it. You may not distribute the ebook to other individuals by using email, floppy discs, zip files, burning them to CD/DVD, selling them on any type of auction website, making them available for free public viewing or download on any website, offering them to the general public offline in any way, or any other method currently known or yet to be invented. You may not print copies of your downloaded book and distribute those copies to other persons. Doing any of these things is a violation of international copyright law and would subject you to possible fines or imprisonment. Violators will be prosecuted to the fullest extent of the law.

All rights reserved. Except for use in any review, the reproduction or utilization of this work in whole or in part in any form by any electronic, mechanical or other means, now known or hereafter invented, including xerography, photocopying and recording, or in any information or retrieval system, is forbidden without the prior written permission of both the publisher and copyright owner of this book.

for all the witchy girls

Strangers at the Inn

The Speculation & The Bird

Man on the Run/Man Overboard!

The Bog of St. Martin

A Penance Party for Naughty Girls

The Ancients and The Ondines

A Greater Evil Rises Upon Us

A Kind of Innocence

A Becoming Lie/Afraid of the Dark

Beware the Kings & Queens of Old; Their Fortunes Are To Die For

The Dark of Nowhere

Tools of the Trade

A Night To Remember

The Last If Ever

An Understanding of Sorts

A Closer View, Upon Re-Inspection

Deep In The Dark Harsh Belly Of The Beast

A Guitar & A Fiddle

Everything You Said Was A Lie

Faithful To His Memory

At the Center, A Pit

Into The Ground, Cold With Snow

A Dance And A Distraction

Arabel Spade was not like the other girls. She knew this for certain after old Mr. Hapkins’ funeral. Everyone turned out for the dismal ceremony, standing together in the spitting rain, hiding solemn faces under wide brimmed black hats and downturned glances. All eyes were upon the plain black coffin being lowered into the wet, dark soil; all eyes stood witness to the deceased man’s final journey into the cold belly of the earth.

Except for Arabel. She was too busy staring at the spectre of old Mr. Hapkins as he frantically tried to leverage the coffin open with grey stiff fingers, his skittish eyes darting back and forth in confusion as he did not understand the futility of his actions. His mouth worked wildly, as if he wanted to speak, to scream, to understand why he was not in his body and why said body was being lowered into the ground as the bagpipes played mournfully overtop the curtain of rain.

Arabel surveyed him sadly. She had seen his kind before. She also knew they never managed to reclaim their discarded bodies. They always tried, but none succeeded. Once the spirit left the mortal coil, it no longer belonged within the earthly realm. Of course Arabel was not exactly certain where they belonged, but it was obvious, it was no longer here at The Corvids. Arabel very much sympathized with their plight – she did not know if she belonged in The Corvids either.

The Corvids was the affectionate name bestowed upon the four townships bordering one another: Ravenswood Glen, Magpie Moor, Crow’s Nest Pass and Blue Jay Hollow. It was easiest to refer to the towns collectively as The Corvids, and most folk did.

The Priory stood in the epicentre of The Corvids. It stacked itself as high in the sky as it could go and cut the watery sunlight in half with its bulk. Bordering the Four, the Priory had long been a meeting place, a bustling, festive market guaranteed to serve up a crowd delighted to purchase wares and an industrious cottage nation willing to supply them.

Arabel often wandered the Priory with Shelaine Murphy, a stout redheaded lass who made Arabel laugh and didn’t remark when Arabel disappeared from the conversation mid-stream now and again. Shelaine came from a long line of horse breeders and very much wanted Arabel to come see the new foal. He promised to be a real beauty as both his sire and his dam were of championship lines.

“Your way with horses,” Shelaine was saying, “it’s simply marvellous. I don’t know anyone else who seems of such a rapport with the beasts!”

It was true. Arabel was keenly insightful into the behaviour and thoughts of most animals and they came to her unbidden, as if drawn to her by an invisible chord. The crows loved her most particularly and she heartily returned their admiration. Down by Ravenswood Glen, in the autumn and winter seasons, a roost of more than twenty thousand crows gathered nightly and hosted themselves a fairly raucous party of naughty chatter and flying feathers. Arabel loved to watch and listen to the gaiety. Their chatter was often loud, comical, and yet strangely cold, in that otherworldly sort of manner.

Arabel had just come from the crow gathering that fateful day, the day of the Lost Souls celebration, to join the rest of the townsfolk at the Priory for the annual lighting of the ceremonial Great Torch. Hundreds of people gathered in the early twilight of the softly foggy night. Arabel searched for Shelaine, or for anyone she might want to stand with to watch. Arabel moved quickly throughout the crowd, searching, sensing the excitement, the general mood of revelry; she felt the barely disguised tension underneath the happy façade.

There was a grey and swirling energy present; Arabel could see it, feel it, almost taste it – like chalk. Arabel’s mouth felt gritty and she was suddenly incredibly thirsty. The magnificent flame approached the base of the Great Torch and Arabel felt the collective sigh as the greedy licks of fire consumed the wood. And then the screams began.

Propped against the base of the Great Torch, the light shone to reveal that a small, female, mostly naked corpse had been draped there. The thin white arms and legs of the corpse looked garish under the red firelight and the mist could not hide the horror of the spectacle. A frail looking woman next to Arabel fainted suddenly and her male companion quickly grabbed the unconscious woman and moved her away from the perimeter of the Torch. Others edged closer, drawn to disaster and death like flies or vultures.

Arabel heard the screams. She saw the grey swirling energy possessively circling the body and she felt both the sorrow and the bloodlust of those around her. Arabel turned away. The night of Lost Souls was no longer a moniker for veil lifting or reconnecting with the other side; it had turned into a night of murder and a lost soul had personally visited their domain.

Hours later, the coroner, Mayor Aldritch and Chief Constable Bartlin were locked away with the corpse in the morgue. Arabel had never been inside the morgue but she imagined it to be a cold, ultra bright, antiseptic room where everyone wore snappy white gloves and wielded sharp scalpels on dead flesh. The smell would gag her most likely, so Arabel was glad when everyone pulled lots to see who was to investigate what, and she got the Copse instead.

Since no one knew who the dead girl was, most likely she was a drifter, a runaway, lost and murdered on her sad journey to nowhere and answers were needed. The Copse housed the Gypsy encampment which had sprung up in the murky depths of the deep green forest. The Copse was extensive, it bordered from Ravenswood Glen to Crow’s Nest Pass and that took two full days on horseback to complete. The majority of the encampment was located in Ravenswood Glen and it was an hour by horseback from the border of Crow’s Nest Pass.

The Alpha's Choice by Jacqueline Rhoades
The Trouble with Dating Sue (Grover Beach Team #6) by Anna Katmore
Historia de Roma by Indro Montanelli
Agents of the Internet Apocalypse by Wayne Gladstone
Dismember by Pyle, Daniel
Nasty Little F___ers-Kindle by McAfee, David
Herring on the Nile by L. C. Tyler
Phenomenal X by Valentine, Michelle A.
His by Tanner, Elise, du Lys, Cerys
Whispers From The Dark by Bryan Hall
Our partner