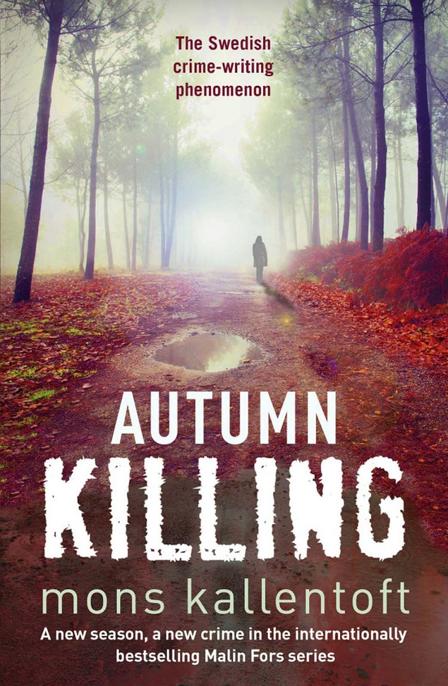 Part 2: Rain from a Cloud that will never Return

Part 3: The Carefree and the Scared

The right of Mons Kallentoft to be identified as the Author of the Work has been asserted by him in accordance with the Copyright, Designs and Patents Act 1988.

Is the boy in the film scared? The one running away from the camera in a world without a sky?

Is fear what we feel when we’re about to lose something important in our lives?

Or was it fear I felt when I was running? When they chased me across the school playground, throwing their red-hot barbs at me, their snake-like words?

I was scared of the anger, the blows which struck without me understanding why. Were the blows my lot? Why did I arouse such anger?

I’ve always been most scared of loneliness. The sort that lies beyond the blows, the insults. Yet I have spent almost my whole life alone. It feels as if I have been standing on my own in the middle of a desolate, rain-swept field, waiting for someone I miss to come back to me.

The skies have opened this autumn.

The rain has been tormenting the town and the fields and forests, the people. It has been raining in every possible way the clouds have managed to come up with.

The drains have been full for days. The gutters are overflowing, washing up dead beetles and drowned mice onto Linköping’s streets. Rats the size of cats, with swollen, rotting white stomachs. Every person’s nightmare. Young snakes are gasping for air, eager to shed their skin one more time before they drown, to live like snakes before their snake-lives are over.

Who knows what else might be about to float up from the depths?

We humans are like dogs. We can be at our loneliest among other people. But we are more afraid than dogs, because we know that pain has a history, and we recognise pain when it approaches.

Those young snakes are in my blood, and they won’t stop whimpering, they won’t leave me alone.

Those snakes, they hiss.

They spit. Their tongues flicker beneath my skin.

The world outside is even darker than the one in the films here this evening.

The raindrops are heavy dreams against a reluctant windowpane. What am I to do?

I’m going to take back part of what is mine.

But what I remember most clearly is the fear. The way he could lash out at any moment, seeking my body with his clenched fist.

My father used to hold the camera in one hand, pressing it tightly to his right eye, and wave with his free hand, directing me this way and that, in his hopeless attempts to put reality right, make it the way he wanted, get it to do his bidding.

But something always gets lost.

And can never be recaptured.

I know what fear is now. The feeling that this is all that can be, all that has been. That there was never any difference.

Images on the film-screen hung up in the living room. Shaky Super 8 pictures, in bleached, almost monochrome colours. I, the boy, soundless and jerky, as if only the one-eyed camera can capture my anxiety.

I saw my life unfold in those pictures. I see the same thing happening now.

Bare, cold feet drumming across dew-wet grass and cold gravel, a ball kicked high into the air, a hunched body lurching forwards over a sandpit.

Then the bitterness takes over. The shame. Shoulders drooped in defeat become a person’s true posture. And things like that can be inherited.

Sometimes I’ve felt like going straight to the heart of this evil. I’ve stood outside the building he lives in, under the trees, waiting.

What does the boy in the pictures, the boy who is me, want? What is he thinking, in that eternal present moment?

Does he think that the mockery is his life? The pursuit?

Mum must be holding the camera now. I’m in Dad’s tobacco-scented embrace, his arms are covered with grey wool, and in the background shines a black-and-white Christmas tree. I am crying. The whole of my two-year-old face is a picture of despair, and I’m reduced to perhaps three emotions: sorrow, and panic, and that wretched fear.

What’s the boy thinking? The one with the puffy red cheeks?

I get a kiss on the forehead.

Father had a beard back then, as fashion dictated, and Mum looks funny in her short skirt, and now I’m happy again; for a few short seconds I am happiness.

There is a chance in the forest. Shredded by piercingly sharp rain and poisonous grey wind. An opportunity to resurrect myself, to become the person I have a right to be, the person whose life is a series of beautiful unsettling monochrome moving pictures housed in perfume-scented white sleeves.

The projector hisses behind me, my shoulders and head create a shadow on the wall at the edge of the pictures, as though I want to climb inside them and become that boy once more. Resurrect the person he could have become.

Where did the love go? The smell of tobacco. I would go to you, Father, even though you hit me. I went to you, because that was all I knew.

It must be possible to find firm ground in another person’s gentleness, it must be.

Dad and me in a park. He turns away from me when I fall over. Mum turns the camera away from me, into his face, and he’s grimacing. Unless that’s just the way he looks?

There’s no love in his face.

Then the film ends.

I remember the boy in the pictures.

Know what he would have been capable of.

Know what this night bears in its pus-oozing womb. Know that the young snakes have to get out, out of me, that their evil faces must be destroyed.

I can conquer my fears again through violence.

Slowly, slowly into the night.

Just accelerate gently so that nothing goes wrong.

Hands shaking on the wheel, pitch black outside the car windows, the storm making the rain fly horizontally through the air, large drops merging with microscopic ones, the windscreen full of black tears that no wipers could ever cope with.

Malin Fors can feel her heart pounding in her chest; she can see it in front of her, as black and liverish and tormented as the night outside. She is still on the forest road, and the bare branches of the trees are reaching out to grab the car, like the enraged tentacles of some prehistoric monster.

Malin takes one hand off the wheel, slows her speed, wipes her eyes, tries to convince herself that it’s just rain on her cheeks.

She breathes in the musty air of the car and feels nauseous.

There’s a tapping sound on the metal roof of her unmarked white police Volvo. Little white bullets falling from the skies in swarms. Soon the noise is thunderous and the hail hammering on the roof must be the size of fists, and it’s drowning out the sound of the engine, screaming at her: You’ve made your choice, there’s no going back, you’ve given up, Malin Fors!

Her whole body is shaking.

Janne’s face dancing in front of the windscreen. Tove’s.

Malin’s daughter’s fifteen-year-old face is alarmingly smooth, and its outline and contours drift in and out of the dark autumn night, but if Tove is trying to say anything, her voice is swallowed up by the hail pounding on the roof.

And then it stops.

Only the sound of the engine, and hesitant drops on the windscreen, no more than the wipers can cope with.

She can just make out the lights of the motorway into Linköping, beacons flickering in the night, getting closer, and Malin increases her speed, thinking: I’ve had enough of this, get me out of here, and she sees Janne’s face before her: he isn’t angry, or sad, just tired, and that frightens her.

It was a lovely idea: that the three of them, Janne, Tove and Malin, belonged together, and that they could accept such a gift.

She and Tove had moved back in with Janne, to the house outside Malmslätt, towards the end of summer last year. More than a decade after the divorce, they were going to try again; they felt obliged to after that crazy, scorching summer that almost cost Tove her life, when she was kidnapped by a murderer Malin was looking for.

Malin had sat in the garden that September, the garden of the house where they had lived together long ago, and she had watched Tove and Janne clearing weeds and raking leaves over by Janne’s old cars. She had looked at them and believed that it really was possible to start again, to create the world anew if only the willpower and foundation were there.

They had played nicely to start with. Not working too much, making dinner together, eating, loving, trying to talk, trying to say anything that might actually mean something.

Then autumn had arrived in earnest.

They had taken Tove to see a psychiatrist at the University Hospital who specialised in treating adolescents. Tove had refused to talk to her, saying there was nothing to talk about: ‘Mum, I’m not frightened. I’m all right. It’s OK. It wasn’t your fault.’

But Malin knows it was her fault. Tove had been dragged into an investigation the previous summer, and if that wasn’t Malin’s fault, then whose was it? If it hadn’t been for her job as a detective, it would never have happened.

Malin often wished she was as rational and pragmatic as her daughter, and could find it as easy to come to terms with the state of things: Tove was apparently untouchable.

The broken cars in the garden. Lids left off toothpaste tubes. Milk cartons opened the wrong way. Words tossed out into space that just bounced back, unanswered and unheard. Roof tiles that needed to be replaced. Food that had to be bought from monstrous out-of-town superstores. Guilt and regret wiped out by everyday tasks and a vain hope that the passing years had brought a level of wisdom. She recognised the irritation as it crept up on her at the start of November, like a hacksaw to her soul: the wounds, the gentle yet cruel derision of love. The little boy reappeared in her dreams and she wanted to talk to Janne about him, about who he was, or who he might be. She had lain beside Janne in bed, knowing he was awake, but her paralysed tongue hadn’t been able to form any words.

Sadie Hart by Cry Sanctuary
To Tame His Mate by Serena Pettus
Lucifer's Lottery by Edward Lee
Our Lady of Darkness by Peter Tremayne
Lone Wolf (The Westervelt Wolves, Book 8) by Royce, Rebecca
Immortal Sea by Virginia Kantra
Dreamsleeves by Coleen Murtagh Paratore
The Persistence of Memories - A Novel of the Mendaihu Universe by Jon Chaisson
Break by Vanessa Waltz
Last Chance Saloon by Marian Keyes
Our partner