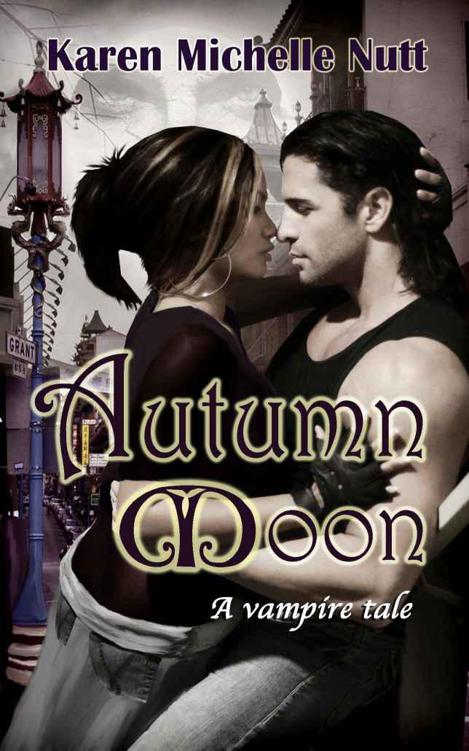 Federal copyright law prohibits this work from being copied,
scanned, mechanically, or digitally produced for sale or for sharing except for brief passages to be used in reviews and related articles. For permissions or requests for other uses please contact the author.

This is a work of fiction
.
Names, characters
, places, and incidents are products of the author
’
s imagination or are used fictitiously and are not to be construed as real
.
Any resemblance to actual events, locales, organizations, or persons, living or dead, is entirely coincidental.

All rights reserved
.
No part of this book may be used or reproduced electronically or in print without written permission, except in the case of brief quotations embodied
in reviews.

“Do you know anything about vampires, the chiang-shih as the Chinese call them?”

“What? Are you going to tell me another story?”

“Of course I know what a chiang-shih is. I had slumber parties, but I outgrew believing in them when I turned twelve.”

She took an exasperated breath. “The Chinese believe that a person has two souls. One soul can leave the body and roam the earth.”

“If the two souls aren’t reunited the body dies and the soul will roam the earth forgetting the human aspects, turning toward a more animalistic way of life, craving the essence of the living.”

“Blood, the essence of life.”

“Sure. Whatever.” Her shoulder lifted in a shrug. “What does this have to do with my uncle or me for that matter?”

His gaze lingered over her. She squirmed, but didn’t look away. “Everything. I’m afraid you’re in danger now. I’ve tasted you.”

“I know how your heart beats.” He placed his hand on his chest, tapping. “Thump-thump—thump-thump. I’m a vampire, a chiang-shih and I have two days to reunite my souls.”

She stared at him for a blink of second before she turned and headed for the front door while mumbling under her breath. “You are a lunatic. Too bad, too, because you’re a good-looking guy, not to mention a great kisser, but having a screw loose is where I draw the line. I’ve listened to what you had to say. Now I think you better leave.”

He moved fast, faster than a human. He stood, leaning against the front door as if he’d been standing there all along.

She stopped in her tracks, turned around to make sure her eyes hadn’t deceived her and that he truly had materialized in front of the door. He knew his movements would spook her, but he didn’t have time for delicacy. He needed her to believe him.

“Holy, holy—how did you do that?” She looked at him again. “Are you some kind of magician?”

She backed up a step. “Okay, say you are. The chiang-shih of legend is known to have a hideous green phosphorescent glow about it, serrated teeth and long talons. You don’t have any of that. Where are your fangs? Huh?” She whirled around to flee, but he was there in front of her, blocking her way.

She opened her mouth to scream but he was quicker. He kissed her—again. He was a vampire and most of the time he craved blood, but with her he craved her mouth—among other things. He plundered, taking and damn if the woman didn’t respond. She may be afraid of him but there was a connection between them, something that bonded them. She had to be the answer to his prayers.
Praises for Autumn Moon

“Autumn Moon” starts with action and doesn’t stop. The romance is perfectly entwined with myth and suspense. A one night read.”

~Reviewed by Shona, Bitten By Books~

“If you have a craving for a good vampire story, you don’t want to miss out on ‘Autumn Moon.’ Read through the pages of this delightful ‘love’ story, as this unlikely pair attempt to conquer Jariec’s curse before his time runs out, leading them into a sinful interlude.”
~Reviewed by Deanna, Ghost Writers Literary Review

“Autumn Moon is a completely new take on the vampire genre, or rather I should say it’s an ancient Asian version retold in a refreshing new light. Autumn Moon is one of those stories that comes at you unexpectedly and takes the vampire legend to an entirely different level.”
~Reviewed by Clover Autrey, PNR Romance Reviews

This is a very fast-paced piece, but it keeps the reader in the midst of the action. Ms. Nutt does a wonderful job of weaving a legend into the heart this romance.

“This books is great. I had a blast. We have an ancient evil, a tormented family, a hunky hero and his lovely lady, and plucky grandparents that are not afraid to kick some paranormal arse. Lovely work!”

Dedicated to Jairec Baker, the little boy with a very cool name.

“A man is a bird with one wing and he searches for his mate, the other wing.”

San Francisco, California is known for its mild temperatures all year round and for its blessed fog during the summer months. In the morning, the mist acted as a magic cloak protecting Jairec Connelly, but now the enchantment wore off leaving the sun’s rays sizzling the pavement like laser beams. Jairec pulled the hood of his sweatshirt down over his head, shading as much skin as deemed possible. Even with this effort, he could feel his skin burn. It wouldn’t do if he burst into flames especially since he needed to keep a low profile.

From across the street, Jairec set up his stake out, watching the comings and goings of people entering
Moon’s Acupuncture
, but still no sign of the man who could help him. He pursed his lips together. Help him? He’d have to convince him not to kill him first.

At 9:30, a woman with long dark hair dressed in a black suit and comfortable shoes opened the acupuncture shop, unlocking the doors from the inside. He glanced at the two windows above the shop. She must live in the apartment above like so many others did. Two other employees, one male, one female arrived a half an hour later, both in their early twenties. All three were of Asian descent, not surprising since this was Chinatown and the businesses were probably family-owned. By noon, there was still no sign of Dr. Jin Lei.

Dr. Lei had what Jairec needed. He was willing to pay for his services, but if the good doctor wouldn’t help him, he’d take it by force. He wasn’t a violent man by nature, but this was a matter of life and death, his to be exact.

He’d wanted no part in this supernatural bullshit, but his wanker of a brother had dragged him into it anyway. Now Tristan was missing and he had been turned into the undead. “Some holiday,” he grumbled. He did what any preternatural freak would do
.
He listened. He waited and learned whom he needed to see. The other freaks—shapeshifters, demons, any who slinked out of their hidey-holes at night called her, “The Seer.” She turned out to be a crotchety old woman named Gladys Seymour, living in the suburbs of downtown San Francisco. He thought back to what Gladys told him, wanting to make sure he didn’t miss something.

Gladys
allowed Jairec to enter her house and follow her to the kitchen
.
She wore a blue shift, sandals and her gray hair pulled back in a bun
.
The effects of his new life were taking its toll
.
He could hear her heart beating—bum-bump, bum-bump like a beacon calling him
. H
e could smell the coppery tang of her blood flowing through her veins
. The delicate skin at the base of her neck would prove no protection once he sunk his teeth into the flesh.
He licked his lips in anticipation.

Her gaze snapped to his. “You take a bite out of me big boy and I’ll—”

Against his will, his new acquired instincts took over and h
e lunged. She waved her hand, propelling him back with a magic blast from her fingertips
.
He slammed into the wall and slid to the floor
.
If he’d been human, she’d have killed him or at the very least rendered him unconscious
.
There were some perks to being one of the undead.
He could take a beating and keep on ticking.

She pointed a finger at him and he cringed
,
expecting another blast from her.
“
I’ll forgive you this one slight because you’re newly made
.
Make a second attempt
,
chiang-shih and you’re toast
.
Do you got it
?” Her dark eyes narrowed, warning him to behave.
She stood maybe five-two, but the power radiating from her convinced him she meant every word.

“I apologize
.”
He leaned against the wall for support as he came to his feet.

She nodded
.
She walked over to her refrigerator and took out a bottle containing a dark reddish liquid too thick to be red wine
.
He had a sickening feeling of what it was and recoiled when she jabbed it at him.

“
Don’t be a fool
.
If you don’t drink it, you’ll kill someone and all will be lost then
.
Keeping a pure soul will be your salvation.”

He took the bottle from her
.
He closed his eyes as he took a swig and hated that he liked the taste.

He drank every last drop, wiping his mouth with the back of his sleeve.

“Now sit
.”
She pointed to the table
.
She went to her cabinet, took out a wooden bowl and filled it with water
.
She mumbled a chant or prayer of some sort before she gazed at the liquid.

The Seer obviously witnessed something else
.
“You will find the cure in Chinatown
.
Dr. Jin Lei’s place.”

“This doctor will know how to help me
?
He’ll be able to turn me back
to the way I was
?”

“I only know the elixir of life will be found there
.”
She hummed and weaved back and forth as if receiving some kind of psychic advice from the other side
.
“Autumn moon is your destiny
.
You must accept the elixir before the festival’s end
.
If you do not, you’ll remain cursed and walk among the undead for all eternity.”

“Dr. Lei will hand over the cure
.
Just like that.”