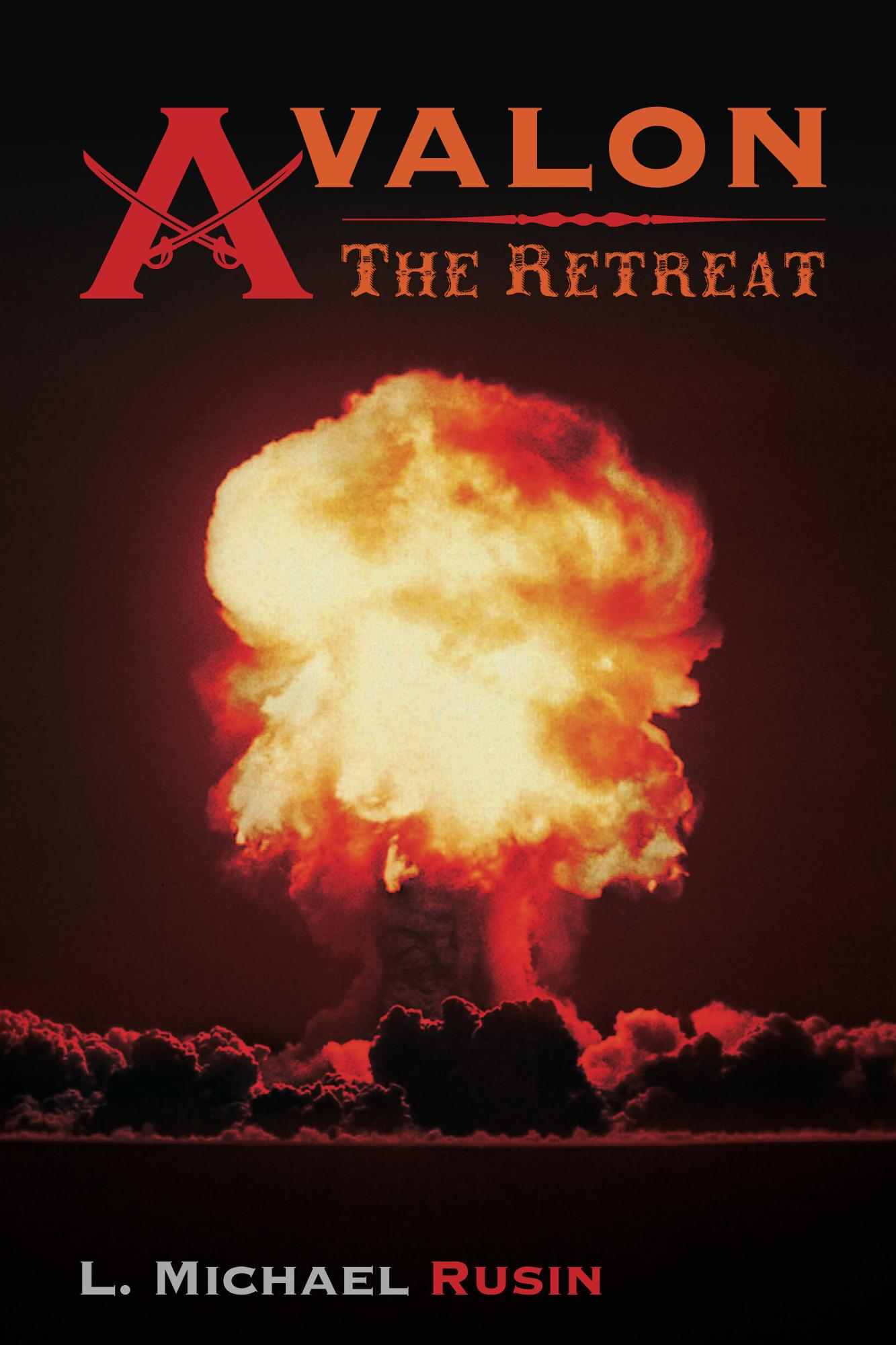 Visit
www.AvalonTheRetreat.com
for upcoming books in the series.
Visit us at
www.KamelPress.com
Copyright 2012 by L. Michael Rusin. All rights reserved.
The Avalon “A” logo designed by Kermit Jones, Jr., created by Meredith Sump, and is a trademark of Kamel Press, LLC.
This book is a work of fiction. Names, characters, places, and incidents are the products of the author’s imagination or are used fictitiously. Any resemblance to actual events, locales, or persons, living or dead, is coincidental. All rights reserved. No part of this book may be reproduced in any form or by any electronic or mechanical means without permission from the author.

Library of Congress Control Number: 201295008
Published in the USA.
Chapter 1

The Balloon Pops
The sirens wailed in the distance, making a mournful sound that pierced the air. It was a sound that was impossible for anyone to ignore, a sound that resonated through the house, reminiscent of a fifties low grade, end-of-the-world movie.
Except this was real.
Dogs yelped in mournful synchronization. Birds in large flocks took flight and were gone. The local news station said there was a terrorist attack on the East Coast of the United States. Most of the stations gave the same message and implored everyone to remain calm and stay at home.
The radio on the kitchen counter was tuned to a soft rock station when the emergency broadcast signal started to blare. It was a man’s voice.
A message has been handed to me by the station director. It’s my sad duty to inform you that a nuclear device was detonated in Atlanta, Georgia a few moments ago. Casualties are running high, but details are sketchy. Stay tuned for further developments.
Mike knew exactly what he was going to do. It was the same thing the rest of the members of his retreat were probably doing right now. He prepared to leave, packing up his “bug out” essentials so that he could head for the retreat. He and members of his group kept several crucial items handy in backpacks and a few nylon bags that they would take with them if anything like this ever happened.
It was happening now!
Mike and the members of his group had planned for a contingency such as this one years ago, but none of them believed it would actually happen in their lifetime. Those sirens were telling him a different story, and he had to get going as soon as possible. The radio came to life again.
Fellow Americans, we are being asked to please stay home and off the streets in order to allow emergency personnel and officials to get to the areas where they are needed. We will inform you of any current and updated information as it comes into the studio. Please remain calm and, again, please stay at home.
“Stay home? No way; I’m outta here!”
He said it aloud as he switched off the radio, his voice momentarily echoing off the walls.
Mike turned on his hand-held-radio, recognizing the familiar sound of a message being sent. The key word “
Firestorm”
was said five times audibly, and then there was a slow but precise rhythm in standard Morse code of a coded message being transmitted. He and members of his group used
The DaVinci Code
by Dan Brown, paperback version, as a code reference. Mike made his way over to the writing table, opened his copy of the book, and began writing.

When he had copied all the letters it read,

We are all leaving now. Cache first. See you there. Luck.

The code continued repeating itself, but he knew why; since it was still early, others in the group might not have gotten the message. It would transmit this way for the next twenty-four hours so everyone could receive it.
So it finally happened?
His thoughts were automatic as he reflected on what the blaring sirens were telling him. Installed decades ago, they hadn’t seen actual use aside from infrequent testing since their installation in most American cities in the early 1950’s when the Civil Defense ran occasional drills. All members of his survival group, however, had completed numerous practice drills using this same system.
Security was paramount in any group, and they knew that secrecy in this matter was no different. When transmitted over the airwaves, or even by phone, anyone could intercept a message, and they desperately needed a balance between security and usability. A group as small as theirs couldn’t afford large losses of life or casualties. They attempted to mitigate the danger with proper planning, execution, and clear communication that could only be understood by their own people.
Mike knew that history held many lessons. One example came from World War II, during which only two types of code were never successfully broken. The first was centered on languages spoken by Native American code talkers; the second, however, didn’t require learning a new language.
It entailed all members of a group having the same edition of a book that they could all refer to as a key to both encode and decode a message, much like a Rosetta Stone. The information was then sent out in standard Morse code. This was the system he and his group had decided on and though it was somewhat tedious, it was also absolutely foolproof and unbreakable. In place of a sophisticated coding machine or mechanism, it always worked.
The message usually started with a classifying signal word or phrase that was repeated several times and at a predetermined time. Examples were Forest Fire, Yellow, Red, Green, or the phrase “The River Meanders.” Those signals told the receiver of the message both its level of urgency and whether it was a drill or an actual emergency. The signal words and phrases were short and memorized by all members of the group.
The word “Firestorm” Mike had recorded marked this message as extremely urgent and not a drill; copy the coded message and comply. It was the message all of them hoped to never receive, but here it was. It was real and the truth was simple, life for all of them would likely forever change from this day forward.

He was in a hurry, but not overly so. Out of necessity, he was careful and methodical about what he gathered, knowing deep down that he probably wasn’t coming back. Mike picked up the military issued aluminum-framed Alice Pack backpack that sat in the corner, tossed it on the bed, and began to execute a carefully scripted and practiced checklist. He walked over to the closet, opened the door, and grabbed his web belt, setting it aside momentarily while he laced up his boots.
Without giving it much thought, his shirt came off, leaving him with only a T-shirt on his torso. Stepping into the closet, he removed the loose panel in the back and took hold of the secret lockbox that had carefully been placed there. Entering the combination, he removed the custom shoulder holster rig. It was fitted with two holsters… one for his .44 Magnum Smith and Wesson six inch barrel and the other for a Colt .45 1911 A1. Both were in the lockbox, hidden away safely from any thieves that might have broken in during his absence.
The holster rig was specially made for him by a friend who had been a Parachute Rigger in the Navy. He specialized in custom modifications, and Mike’s setup was tailor made. It fit like a glove under the loose, dark denim, button-up shirt he selected earlier.
It was a balancing act of risk versus practicality. Mike didn’t want anyone to notice he was armed as he headed for the retreat, but it would be foolish to ignore the fact that with law enforcement overwhelmed, the time was likely coming when “might would make right.” He wasn’t going to take the chance of being on the wrong side of that logic because he knew that being a good guy was no defense against an armed bad guy with something to prove. Preparedness was a nebulous affair, at best, and full of uncertainties.
He reached out and grabbed the U.S. Marine Corps KA-BAR knife and duct-taped it to his calf. It had an eight-inch blade, and this particular one was Vietnam issue. The muscles in his forearms rippled as he twisted his wrist and rolled his pants leg back down to hide it. He made a quick check out the window with a scan from left to right and then right to left. It was just about that time; he was almost ready to leave.
The Smith and Wesson .44 came out with a rehearsed move. He pushed on the release, flipped his wrist so the cylinder opened, and looked at the loads. They were all hollow point. Satisfied that it was loaded and ready, he settled it back in the holster and pulled out the .45.
Again rehearsed, he ejected the magazine, catching it with his other hand and took a quick glance at it. Having verified it was full, as well, Mike slipped the 1911 back in place in the holster. He’d done this a hundred times and, at this point, it was automatic. The Alice Pack went on a few minutes later, just before he headed out.

The Shattered Goddess by Darrell Schweitzer
Civilian Slaughter by James Rouch
Song of the Highlands: The Cambels (The Medieval Highlanders) by K.E. Saxon
The Girls of Tonsil Lake by Liz Flaherty
The Flood Girls by Richard Fifield
The Silver Glove by Suzy McKee Charnas
Stepbrother JEEZ! (The Stepbrother Romance Series - Book #4) by Adams, Claire
Forbidden Drink by Nicola Claire
Seduced by His Touch by Tracy Anne Warren
A Princess of The Linear Jungle by Paul Di Filippo
Our partner