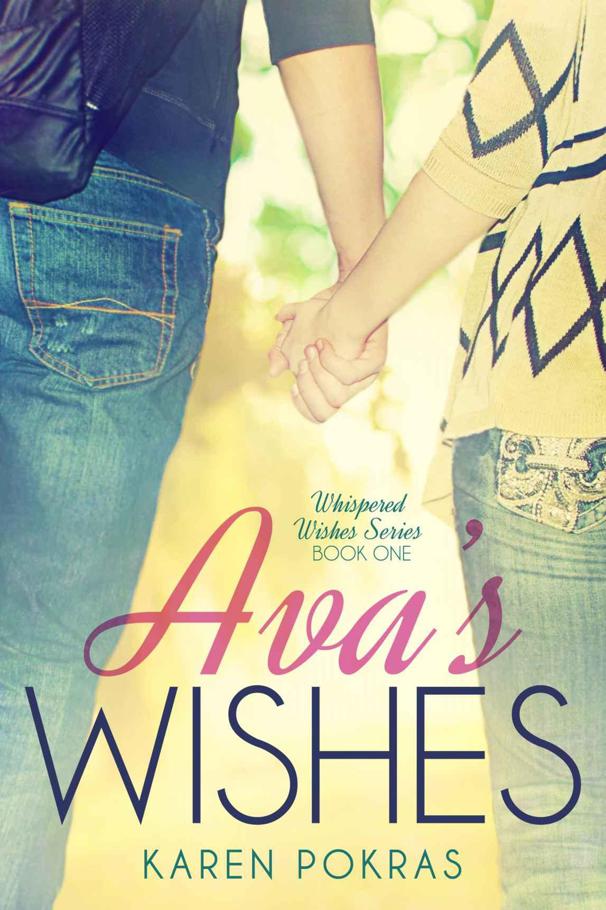 All rights reserved. No part of this publication may be reproduced, distributed, or transmitted in any form or by any means, including photocopying, recording, or other electronic or mechanical methods, without the prior written permission of the publisher, except in the case of brief quotations embodied in critical reviews and certain other noncommercial uses permitted by copyright law. For permission requests, please go to
www.karenpokras.com
.

Disclaimer:
The characters in this novel are fictitious. Any resemblance to actual individuals is purely coincidental.

Digital Edition
, License Notes   This e-book is licensed for your personal enjoyment only. This e-book may not be re-sold or given away to other people. If you would like to share this book with another person, please purchase an additional copy for each recipient. Thank you for respecting the hard work of this author.

Edited by Melissa Ringsted of There For You Editing

Other Books by Karen Pokras

Ava took a step back and admired her sketch.
You’d seen one naked body, you’d seen them all.
In the three and a half months since she’d been enrolled in Wolfenson College’s Figure Drawing class, she really had seen them all: tall, short, thin, fat, male, female. She was getting tired of drawing the human form and was ready to move on to something else ... anything else. The models were mainly other students looking to make some extra money. She couldn’t blame them. She was tired of being broke herself, although you couldn’t pay her enough to pose nude. It’s not that she was ashamed of her body or thought she was bad looking. She considered herself on the better side of average and had been told so more than once. She just thought that some things were meant to stay private.

Drawing live nudes had been awkward at first, especially when it was someone Ava knew, but after a while, it was just a body—no different really than a bowl of fruit or a vase of flowers. She supposed that’s how doctors felt after their first few patients as well. Still, she preferred to remain on her side of the easel and counted the days until the class was over.

The men were the worst. Ava hated to be judgmental, but the guys were full of themselves. They were okay in the looks department, however she’d seen better. She’d have liked to tell them so, but figured that would have gotten her kicked out of a class she needed in order to graduate. Luckily, this was the final model of the semester. His name was Mark, or maybe it was Matt. She couldn’t really remember, nor did she care. The only thing that mattered was finishing up this class—one of the many required for her dual art and business degrees. Her big dream was to open up an art gallery one day.

“Ava!” Ms. Senaca snapped, pulling her out of her daydream. “A little less gawking, and a little more sketching, please.”

Feeling the heat rising to her cheeks, she returned to her drawing. The snickering from the other students in the class didn’t help.

“As if,” she mumbled to herself.

Matt or Mark, or whatever his name was, looked straight at her and winked.
Oh great.
Her eyes darted back to her paper. The end of class could not come fast enough.

“He likes you, you know,” whispered the voice next to her.

Ava knew better than to take her eyes off of her sketch to answer Carly. She’d already gotten in enough trouble for one afternoon. “Gross,” she whispered back.

“Are we looking at the same guy?” Carly asked quietly. “He’s by far the best looking model we’ve had all semester. It’s about time we got someone good. Why do you think I took this class?”

“Um, to develop your craft?”

“I’d like to develop something with him,” Carly teased, smiling at the model.

Ms. Senaca deliberately coughed and looked pointedly at the girls. They quickly turned their attention back to their easels.

Ava first met Carly Cater last year in her Introduction to Watercolors class. She had already set up her supplies when Carly came rushing in to class late, like a bull in a china shop, dropping her paper and paints everywhere. Once she collected herself, she chose the only open station, the one next to Ava. Carly made snide comments every five minutes, and even got Ava in trouble … much like she was trying to do today. Yet, somehow, they’d become friends. Not best friends; those slots were reserved for Ava’s sisters, Holly and Tessa, but decent friends nonetheless.

“Oh! He’s looking back over here. Quick, take that scowl off your face and try look sultry,” Carly remarked.

Ava glanced over at her. Carly stared right at him and slowly ran her tongue over her lips. Ava’s eyes gradually moved to the model. She was afraid of what she was going to find. “Ugh,” she growled in disgust, more over the fact that the guy was too busy staring at her to notice Carly’s actions.

When he finally turned his head away, a smug smile on his lips, Carly whispered, “You should totally go for it.”

“Who does he think he is? He’s something else.” She’d had more than her fill of this guy’s inflated ego.

“Well, I think he’s quite good looking, and his face isn’t bad either!” A louder than probably intended combination snort and cackle escaped Carly’s lips.

“Girls!” Ms. Senaca bellowed. “What on earth is so funny? This is a serious art class!”

“Nothing, ma’am,” Carly offered. “We were actually commenting on this model’s extraordinary physique. He’s been a pleasure to have in class, and a great honor to sketch. We’ve learned so much about the human form just from observing him. In fact, Ava was just commenting that his body was something else.”

“Carly!” For the second time, Ava could hear snickers and feel heat rising to her cheeks. “Ms. Senaca, that’s not what I said.”

“Good. In fact, everyone needs to finish up their sketches today. It’s our last day with this model, and class is almost over. Tomorrow, you will sign up for studio time to work on your final exam projects. I’ll expect five of your best sketches from the semester in a portfolio handed in to me by Wednesday.”

“Thanks a lot,” Ava whispered.

“You’ll thank me later.” Carly smiled, but abruptly looked at her easel with a serious expression when Ms. Senaca cleared her throat and walked by.

Ava was furious, and didn’t speak another word to Carly for the remainder of the class. Even if it was only ten minutes, it was an extremely self-satisfying ten minutes. She finished her sketch and packed up her supplies as soon as Ms. Senaca announced, “Time’s up!”

Carly tried to apologize, but Ava just ignored her. She had gone too far, and Ava wasn’t ready to let it go just yet. She was the first one out of the room, practically running, without so much as a good-bye … to anyone.

Once outside, she found a bench in the courtyard and sat with her head in her hands. It was a cold December afternoon on the east coast, but Ava didn’t care. She needed a few minutes. She pulled out her phone. Tessa or Holly? Tessa was only sixteen and would probably find the entire situation hilarious. Ava was usually the one dishing out advice where her baby sister was concerned. In fact, as the oldest sister, Ava was usually the one dishing out advice where both of her sisters were concerned. She needed to talk to
someone.
At least Holly, only two years younger, would be able to relate. Ava began to text:

Hol, you around? Crud of a day. Need a friendly voice.

While she waited for a response, she tightened the scarf around her neck. Why couldn’t she have picked a school in a warmer climate? She knew why. Initially, she hadn’t wanted to be so far away from her family … her sisters in particular. Back in high school, when it came time to choosing colleges, her sisters were as involved in the decision making process as anyone. Wolfenson was only a two hour drive from home, although she could count the number of times her sisters had actually visited her at school over the past four years on one hand. Tessa was in high school and immersed in her own activities, and Holly was two hours in the opposite direction at the state university. Despite that, they spoke nearly every day. Thankfully, distance made no difference in their relationship.

As far as colleges went, Wolfenson was one of the finest for liberal arts. Tucked away in a beautiful New England town, bursting with magnificent stone buildings, it was originally an all-girls school until it opened its doors to the male population back in the 1930s. Its undergraduate student population was modest at only twenty-four hundred students, but Ava preferred the more intimate setting to the massive university Holly had chosen.

“How humiliating,” Ava whispered to herself, remembering the scene in class with a shudder. She was grateful she’d never have to draw another live nude model. In fact, she never understood why Figure Drawing was a required course to begin with. She didn’t want to be an artist, she wanted to be the person who displayed and sold the art that other people created. Yet, for some reason, she’d chosen to be an art major. She supposed halfway through her senior year was too late for regrets. For the most part, she’d enjoyed her art classes—she wasn’t half bad either—and if she had to choose between art and business classes, she’d choose art classes any day … hands down.

Ava knew her business degree was just as important, though, maybe even more so, if she wanted to run a gallery one day, but the classes were brutal. Most of them she’d barely passed, and one of them, Statistics 101, she wondered if she’d ever pass.

In class, will call you later. Love you to pieces xo - Hol

Tucking her phone back in her pocket, Ava shook her head. If figured Holly would be busy when she was having the worst day she could remember in forever. Slouching back against the bench, she pondered her situation. On the whole, she found college to be pretty much a waste of time; she learned much more from her weekly internship at the Main Street Gallery. Ava worked there every Friday night and Saturday afternoon, and even more when there was a special event, like the
Images in Flight
exhibit coming up next week. She had already told her parents she’d be staying up at school an extra week to help out with that exhibit before coming home for winter break.

Summer of the Wolves by Lisa Williams Kline
The Sinful Stones by Peter Dickinson
Killoe (1962) by L'amour, Louis
Moon Palace by Paul Auster
A Matter of Fate by Heather Lyons
Beyond the Rain by Granger, Jess
Of Human Bondage by W. Somerset Maugham
Make Me by Suzanne Steele
Forgotten Dreams by Katie Flynn
Nowhere but Here by Renee Carlino
Our partner