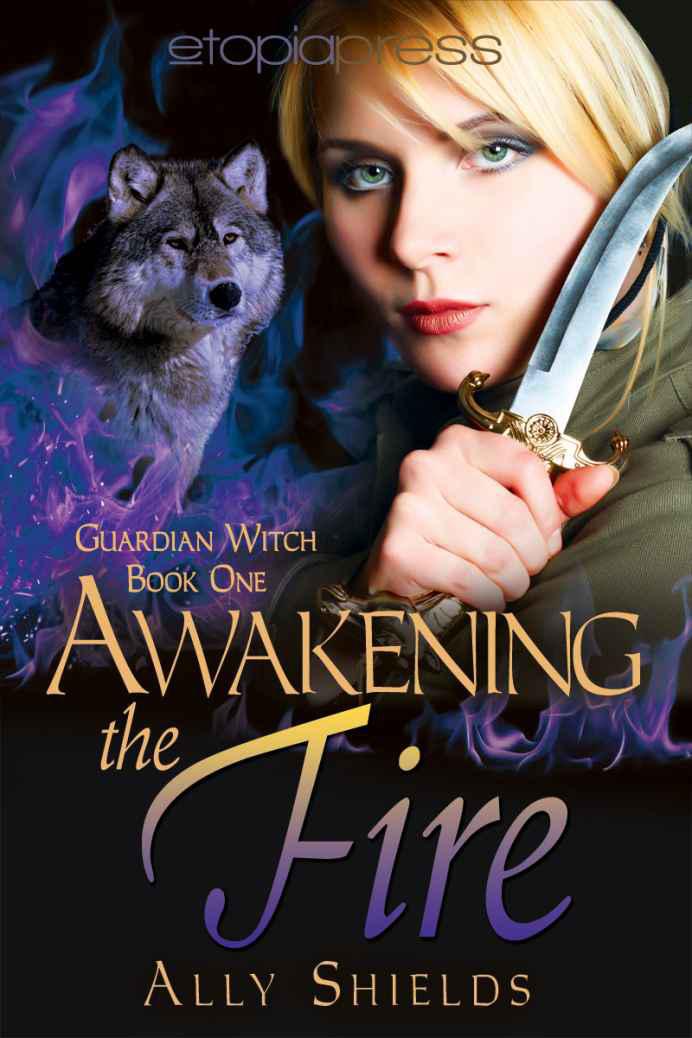 To family and friends who have been so supportive, with special thanks to the following:

Kathleen Marsh, fellow writer and invaluable critique partner; Phil Douglas, my most faithful beta reader; my son David, who helped brainstorm glitches in the plot; and to my editor, Narelle Bailey, for pulling it all together.

The crickets stilled. Ari paused to scan the shadows in the sudden silence, looking for the source of the magic vibrating in the air. Maybe she was imagining things.

A chill scurried across her skin, and she rubbed her arms, setting off a jingle from her protective charms. No. No mistake.

Tense seconds passed as she waited. When the crickets started singing again, she knew that whatever had triggered her alarms had moved on. She took one last look around before shaking her head and setting out along the path. It was close to midnight, the end of her regular patrol of the city. The Goshen Park gates were chained, the trails quiet, the playgrounds deserted. So why did she feel so unsettled?

The faint buzz of her witch senses had started earlier, like ants marching across her neck. Her uneasiness had gained strength at nightfall, grown persistent when she entered the park. Ari scanned the thick undergrowth as she approached a heavily wooded area. A quarter moon filtered through the autumn foliage. An owl hooted. Tiny rodents scampered in the ground debris. Ordinary things.

A crunch of leaves broke the expected pattern, and her head snapped around, fingertips tingling this time. Two eyes glowed in the dark, and she froze as the gargoyle in the underbrush snarled at her. As she watched, the ancient, three-foot creature snatched a furry lump from the ground. Laboriously flapping his heavy wings, he took to the air, clutching a rabbit carcass in his talons. Ari let out a soft sigh, eased her stiff shoulders, and resumed her steady stride. Nothing but a successful evening hunt.

Nearing the center of Goshen Park, she picked up the pace again. She could almost feel the silken sheets of her bed. She passed the west fountain and noted the lights and water were off. Visiting hours for humans ended hours ago. Warning signs forbidding night access dotted gates and posts. Standing on the east edge of Riverdale’s Olde Town, the park provided a barrier between the modern, mostly human world, and the original city where the Otherworlders lived.

At night the park belonged to the predators of Olde Town.

Annoyed by her overactive sensitivity, Ari kicked a rock from the path and listened to it rattle across the pine needles. Had she misread the signs? Maybe this edgy feeling was about the witchcraft class in the morning. Explaining her job as a Guardian, what it was like to be a supernatural cop, was hard enough, but the young girls, usually visitors from the modern side of Riverdale, always asked about spells and potions. She could handle the curiosity, but the inevitable requests became tricky. Could she please,
please
, turn some girl’s ex-boyfriend into a cockroach? Maybe she could. Probably she could. The thought was interesting, even tempting, but Ari wasn’t about to admit it. Humans were already paranoid enough. Being new at the job didn’t make her stupid.

Ari jumped at the sudden scream that rang out on the still night air. She whipped around as she reached out with tendrils of her magic. The musky scent was unmistakable.
Lukos anthropos
. Werewolf. Propelled by adrenaline, she raced toward the sound. Another scream brought her to a moonlit clearing.

Ari skidded to a halt. A werewolf the size of a Great Dane, two hundred pounds of rippling muscle, crouched before a human teenage couple. The wolf’s russet tail lashed back and forth. The kids clung to the trunk of a giant oak. As the dark-haired teenager attempted to shield his girlfriend, the spunky blonde reached around him to swing a stick at the wolf.

A stick? Well, better than nothing, but not by much.

Ari extended her fingertips. A pale blue flame leaped from her fingers to the wolf’s left flank. He yipped in pain, the stink of singed fur filling the air. The creature swung his massive body around and charged.

Ari fired a second stun as the werewolf jumped into the air. The flame shot harmlessly past. With a split second to spare, she snatched the silver dagger from her waist sheath and swung it upward. The blade slid into the wolf’s side as the creature hit her, rolling them both to the ground. Warm blood oozed across her hand. Her nostrils filled with a rancid dog smell.

Undeterred by the knife wound, the wolf reared his head, striking with his long fangs as Ari jerked her head aside. His jaws snapped so close to her cheek that she felt the waft of his hot breath.

Ari braced one arm and shoved, delivering a jab to the throat with the other. She pivoted, breaking free. As she sprang to her feet, she struck out with a sharp kick to his head. The wolf fell back.

She grimaced. No more nice witch.

She unleashed her magic again, the bright blue flame of a full stun smashing into the werewolf’s side. He flew through the air, smacked into two trees, and dropped. His legs twitched once.

Her eyes narrowed as she waited to see if the fight was over. When he didn’t move, Ari turned to the kids. “You OK?”

The boy squinted at his friend in the dim light. “Yeah, I think so. Becca, you OK?” When the girl nodded, he looked back at Ari. “Was that what I think it was?”

Ari raised a brow. “Depends. If you think it’s a werewolf, then, yeah. You don’t want to mess with them.”

“No kidding,” he muttered, throwing another glance at the wolf. “Sure is a big sucker. Never seen one before. Not up close.”

And you’re lucky you survived the introduction, Ari thought. Why didn’t these kids stay where they belonged? Where they were safe? Olde Town was no place for the inexperienced or the faint of heart.

She sighed and shifted her attention to the girl he’d called Becca. Now the danger had passed, she sniffed and blinked back tears. Ari looked her over for injuries. Becca wore a mini skirt and tights, now ripped at the knees. “Are these from the wolf?” Ari pointed to the scratches.

“No, I fell. When it was chasing us.” Becca fingered her torn leggings. “Guess I won’t wear these again.”

Ari nodded, relieved that Becca didn’t have something worse to worry about. No danger of lycanthropy, an incurable shape-shifter virus with a 20 percent chance of transmission. While natural-born werewolves were proud of their heritage, those changed by infection frequently felt very differently. Some resorted to suicide. It was a tough adjustment. At least in this case the kids wouldn’t have to face that possibility. They were white-faced and shaken from their experience but otherwise okay.

“Are you some kind of cop?” Becca asked.

“How’d you do that zapping thing?” the boy interrupted. “Awesome! Had to be magic.”

“Witch magic,” Ari said, dusting off her jeans and inspecting the bloodstain on her white top. Her favorite white top. “I’m Ari. A special kind of cop. I patrol the park, among other things.” She gave them a knowing look. “You know you’re not supposed to be here. It’s off-limits at night.”

“We weren’t hurting anything.” The boy turned his head away. “Just messing around.” His neck turned red as he spoke.

Uh-huh. Ari cut off an automatic grin of understanding. She had been fifteen not so long ago. Eight years hadn’t destroyed her memory.