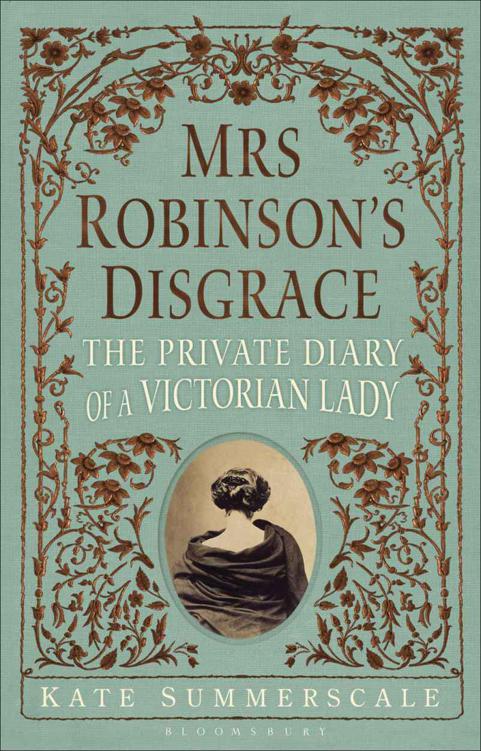 Mrs Robinson’s Disgrace
The Private Diary of a Victorian Lady

In France in the late 1850s, Gustave Flaubert was prosecuted for corrupting public morals with
Madame Bovary
– a novel considered ‘too repulsive’ for publication in Britain. In England, the 1857 Matrimonial Causes Act made divorce for the first time a civil matter, affordable to the middle classes. And the godless ideas Charles Darwin was formulating about natural selection, published to accusations of heresy in 1859, would further undermine the religious and moral tenets of Victorian England.

The story of Isabella Robinson’s fall from grace unfolds against this backdrop of dangerously shifting social mores, in which cherished ideas about marriage and female sexuality were coming increasingly under threat. For a society dealing with such radical notions by clinging ever more tightly to its traditional values, Mrs Robinson’s diary and the lawless ideas about love expressed in it were nothing short of scandal.

A compelling story of romance and fidelity, insanity, fantasy and the boundaries of privacy,
Mrs Robinson’s Disgrace
brings brilliantly to life a complex, frustrated Victorian wife, longing for passion and learning, companionship and love in an unsettled world which – as yet – made no allowance for her. 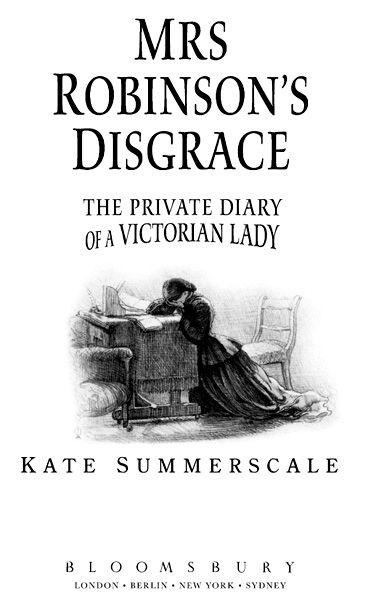 In memory of my grandmothers, Nelle and Doris,
and my great-aunt Phyllis

The wife sat thoughtfully turning over A book inscribed with the school-girl’s name; A tear – one tear – fell hot on the cover She quickly closed when her husband came
.

He came, and he went away – it was nothing –With cold calm words on either side; But, just at the sound of the room-door shutting, A dreadful door in her soul stood wide
.

Love, she had read of in sweet romances, –Love that could sorrow, but never fail, Built her own palace of noble fancies, All the wide world a fairy tale
.

Bleak and bitter, utterly doleful, Spreads to this woman her map of life; Hour after hour she looks in her soul, full Of deep dismay and turbulent strife
.

Face in both hands, she knelt on the carpet; The black cloud loosen’d, the storm-rain fell: Oh! Life has so much to wilder and warp it, –One poor heart’s day what poet could tell?

Book I: This Secret Friend

1 Here I may gaze and dream

4 My imagination heated as though with realities

5 And I knew that I was watched

Book II: Out flew the Web

8 I have lost every thing

9 Burn that book, and be happy!

11 A great ditch of poison

13 In dreams that cannot be laid

Coda: Do you also pause to pity?

In London in the summer of 1858, a court of law began to grant divorces to the English middle classes. Until then, a marriage could be dissolved only by an individual Act of Parliament, at a cost prohibitive to almost all of the population. The new Court of Divorce and Matrimonial Causes was able to sever the marital bond far more cheaply and quickly. To win a divorce was still difficult – a man had to prove that his wife had committed adultery, a woman that her husband was guilty of two matrimonial offences – but the petitioners came in their hundreds, bringing their stories of betrayal and strife, of brutish men and, especially, of wanton women.

The judges were presented with a singular case on Monday 14 June, a month after they had heard their first divorce suit. Henry Oliver Robinson, a civil engineer, was petitioning for the dissolution of his marriage on the grounds that his wife, Isabella, had committed adultery, and he submitted as evidence a diary in her hand. Over the five days of the trial, thousands of Isabella Robinson’s secret words were read out to the court, and the newspapers printed almost every one. Her journal was detailed, sensual, alternately anguished and euphoric, more godless and abandoned than anything in contemporary English fiction. In spirit, it resembled Gustave Flaubert’s
Madame Bovary
, which had been published in France in 1857 after a notorious obscenity trial, but was considered too scandalous to be translated into English until
the 1880s. The diary, like Flaubert’s novel, portrayed a new and disturbing figure: a middle-class wife who was restless, unhappy, avid for arousal. To the astonishment of those who read the extracts in the press, Mrs Robinson seemed to have invited, and lovingly documented, her own disgrace.

Book I
This Secret Friend

‘Why have I gone back to this secret friend of my wretchedest and wickedest hours? Because I am more friendless than ever; because I am more lonely than ever, though my husband is sitting writing in the next room to me. My misery is a woman’s misery, and it will speak – here, rather than nowhere; to my second self, in this book, if I have no one else to hear me’

1
Here I may gaze and dream

In the evening of 15 November 1850, a mild Friday night, Isabella Robinson set out for a party near her house in Edinburgh. Her carriage bumped across the wide cobbled avenues of the Georgian New Town and drew up in a circle of grand sandstone houses lit by street lamps. She descended from the cab and mounted the steps to 8 Royal Circus, its huge door glowing with brass and topped with a bright rectangle of glass. This was the residence of Lady Drysdale, a rich and well-connected widow to whom Isabella and her husband had been commended when they moved to Edinburgh that autumn.

Elizabeth Drysdale was a renowned hostess, vivacious, generous and strong-willed, and her soirées attracted inventive, progressive types: novelists such as Charles Dickens, who had attended one of the Drysdales’ parties in 1841; physicians such as the obstetrician and pioneer anaesthetist James Young Simpson; publishers such as Robert Chambers, the founder of
Chambers’s Edinburgh Journal
; and a crowd of artists, essayists, naturalists, antiquaries and actresses. Though Edinburgh was past its glory days as the hub of the Scottish Enlightenment, it still boasted an energetic intellectual and social scene.

A servant let Isabella in to the building. Within the hallway, gas flamed in a chandelier, throwing its light on to the stone floor and the polished iron and wood of the banister bending up the staircase. The guests took off their outdoor clothes – bonnets, muffs and mantles, top hats and coats – and proceeded up the stairs. The ladies wore low-cut dresses of glinting silk and satin, with smooth bodices pulled tight over lined, boned corsets. Their skirts were lifted on petticoats, layered with flounces, trimmed with ribbons and ruffles and braid. Their hair was parted in the centre and drawn back over the ears into coiled buns sprigged with feathers or lace. They wore jewels at their throats and wrists, silk boots or satin slippers on their feet. The gentlemen followed them in tailcoats, waistcoats, neckties and pleated shirt fronts, narrow trousers and shining shoes.

Isabella came to the party eager for company. Her husband, Henry, was often away on business, and even when he was home she felt lonely. He was an ‘uncongenial partner’, she wrote in her diary: ‘uneducated, narrow-minded, harsh-tempered, selfish, proud’. While she yearned to talk about literature and politics, to write poetry, learn languages and read the latest essays on science and philosophy, he was ‘a man who had only a commercial life’.

In the high, airy reception rooms on the first floor, Isabella was introduced to Lady Drysdale and to the young couple who shared her house: her daughter Mary and her son-in-law Edward Lane. The twenty-seven-year-old Mr Lane was a lawyer, born in Canada and educated in Edinburgh, who was now training for a new career in medicine. Isabella was enchanted by him. He was ‘handsome, lively and good-humoured’, she told her diary; he was ‘fascinating’. She chastised herself later, as she had done many times before, for being so susceptible to a man’s charms. But a wish had taken hold of her, and she was to find it hard to shake.