Read Baby on Board Online 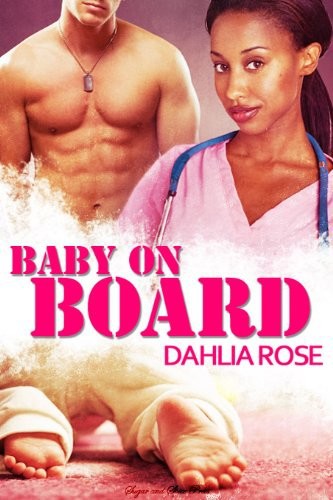 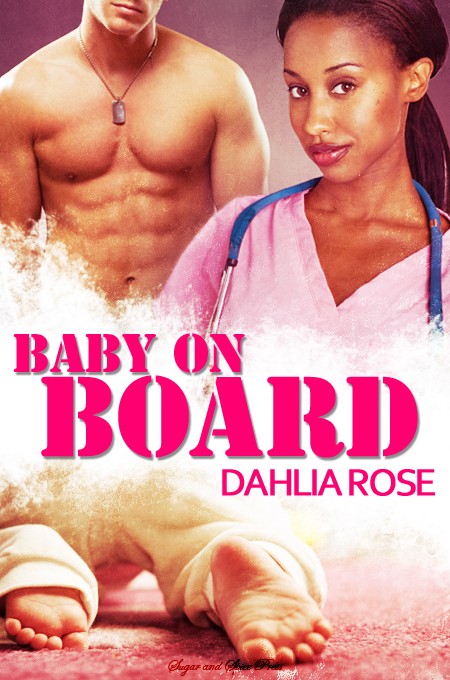 This is a work of fiction. All characters and events portrayed in this novel

are fictitious or used fictitiously. All rights reserved, including the right to

reproduce this book, or portions thereof, in any form.

wheel of his black Escalade with a sigh. For a moment he leaned his head

back against the leather headrest and closed his eyes. A big grin crossed

his face. It was the start of his four-week leave and it was long overdue.

alive so their mission was a success. Now with all the leave time he had

earned and not used, he had four weeks of rest and relaxation. He planned

to ride his motorcycle, probably head to Myrtle Beach and sit in the sand

and enjoy the cool breeze and waves lapping at his feet. Whatever it was,

of it. Rafe put the vehicle in drive and drove out of Quantico with a wave

to the guards on duty at the gate.

of his good friend Lieutenant Brody Gillis. His friend was high on life and

could basically find an excuse to have a party at a moment’s notice.

Usually the party ended up being at his house because he had a pool and,

to Brody, that was a prerequisite at any party. Rafe’s cell phone rang.

Thinking of the devil—it was Brody.

“Only the best party to end all parties,” Brody yelled and whooped.

Rafe winced. “Remember what we said about inside voices, Brody?”

Brody laughed. “I’ve got the beer coming on Sunday—two kegs—and

there. If the food is not to your liking, we’ve got part of the Swedish

volleyball team coming to the party.”

Rafe laughed. “How the fuck did you manage that?”

in D.C. the same day they were.” Rafe could hear the smile in Brody’s

voice. “I gave them the special invite.”

“Oorah,” Rafe replied and pressed the disconnect button on his phone.

Leave it to Brody to find the Swedish volleyball team
, he thought with

a grin. Rafe lived in one of the more expensive subdivisions that had

sprung up in the area around Quantico. He joined the Marines when he

was eighteen even though his family had a few million dollars. His father

his mother came from old southern money. Yet they were two of the most

down-to-earth people anyone could meet. The trust fund that he came into

interest in the bank. Rafe preferred to live off his military pay. By

Saturday, his house would be crawling with women in bikinis and his pool

would be full of drunk soldiers.

front of his TV doing nothing and napping. But, unfortunately, the party

was already planned. Just another reason for his neighbors to think he was

some kind of party animal. He saw the looks on their faces sometimes but

shrugged it off. It wasn’t any of their business anyway. Ten minutes later,

he was turning into his neighborhood. His house was at the end of the cul-

de-sac—a four-bedroom, three-bathroom red brick home. It was one of

the largest on the block. He frowned as he pulled in the driveway. There

was something sitting by his front door.

“Is that a car seat? Is that a fucking car seat?” he mumbled to himself.

Rafe parked and quickly hopped out of the Escalade. He jogged up to

the front door and hell if it wasn’t a baby sleeping on his doorstep. He

looked around, hoping that this was some kind of practical joke. He saw

no one. It was after seven p.m. and everyone was inside. Anger surged

through him. Who leaves a kid outside like this? He tore off the note that

was taped to the handle and read the words printed on the paper.

This is Bonnie. She’s your daughter. Take care of her. I can’t

What the fuck? My daughter?
Rafe looked down at the sleeping baby.

Next to the car seat was a baby bag. He picked it up to search through it.

There were three cans of baby formula, a few diapers, and some

paperwork. The baby moved and made a sound as she opened her eyes.

Her gaze met and held his. It seemed like they stared at each other for

the screaming got louder. He saw the little white car in the driveway of his

neighbor’s house. He’d seen her before. She dressed in nurse scrubs.

to pass her on his way out for a run. A nurse would know what to do.

Without a second thought, he put the bag strap over his shoulder and

picked up the car seat. Rafe jogged several steps to her door and pressed

the doorbell one too many times. The baby’s wails were increasing, and

when he looked down, her face had turned a bright shade of red.
Oh, no,

not good!
He pressed the doorbell harder and then pounded on the door.

“Who’s out there trying to break my door down?” a female voice

house at the end of the street.” She opened the door and he held out the

“The crying! The baby is crying. I don’t know what to do,” he said

hastily. “You’re a nurse. You can do something, right?”

crying? Whose baby is it?” she asked.

“Apparently mine. I came home and found her on my doorstep with a

note.” Rafe took a breath. “I have no clue about babies. Please, please

help me fix it so it stops crying.”

She stared at him and sighed. “Fine. Come in. Let’s see what’s going

She took the car seat from him and he trailed in behind her. She put

confines before lifting the baby into her arms. The crying immediately

“What’s the matter with it?” he asked.

She gave him a cool stare. “First, stop calling her it. She’s probably

hungry and wet. Look in the bag and see if there’s a bottle and a diaper.”

“Okay,” he said and swallowed the lump in his throat. “The note said

her name was Bonnie.”

“What’s the matter, Bonnie? Are you hungry?” she said gently.

“Ma’am, there’s a bottle in here and it’s still warm.” Rafe held it out

to her along with a diaper.

“Second thing, my name is Ivy St. Clair, not ma’am,” she snapped.

name on my mailbox?”

to back to back.”

the bottle in the baby’s mouth as she held her in the crook of her arm. He

watched the little girl suck hungrily at the nipple. Jesus, what if he had

come home later? The child would have been outside alone all that time.

Another round of anger flooded him. What kind of mother would do this

information?” Ivy asked. “Bonnie is well nourished and she has obviously

been taken care of. I guess her mother got tired of doing it alone.”

He caught the underhanded meaning to her words and gritted his teeth.

her and her mother?”

She gave him a bold look. “How do I know? All I know about you,

Major, is that every time you’re home there are cars parked up and down

the street blocking people in their own driveway, loud music is blasting

“My friend throws those parties,” he snapped.

“And you’re sure reaping the reward, aren’t you?” Ivy replied. “Have

a seat and check the bag, Major.”

“You keep calling me by my rank. Most civilians don’t do that,” he

commented as he sat on her burgundy sofa. He looked around and saw

hunter green and beiges. It was cozy and welcoming.

“I work at Walter Reed. I deal with you guys all day, everyday,” Ivy

against her shoulder and patted the baby’s back. The baby burped loudly

and they both grinned. He met her gaze and something sparked between

them. He knew she felt it too because she looked away quickly.

“Okay, I found her birth certificate. Her name is Bonnie Jaclyn Steele.

She gave the baby my last name,” he said. “She’s six months old.”

“Juno Corwin. I don’t know that name and can’t fix it to a person in

“I’m sure you can’t,” Ivy said dryly. “I don’t suppose you keep a file

on your conquests—notches on the bedpost must suffice.”

Ivy took the papers and scanned them. “She’s up to date, has an

allergy to amoxicillin, and strawberries give her a rash. All in all, she

Take My Hand by Haken, Nicola
PerpetualPleasure by Dita Parker
Broken People by Hildreth, Scott
Mood Riders by Theresa Tomlinson
In the Moons of Borea by Brian Lumley
When Work Is a Pleasure by Alix Bekins
Northern Sons by Angelica Siren
Dangerous Curves by Dara Girard
Nocturna by Guillermo del Toro y Chuck Hogan
Appleby and the Ospreys by Michael Innes
Our partner