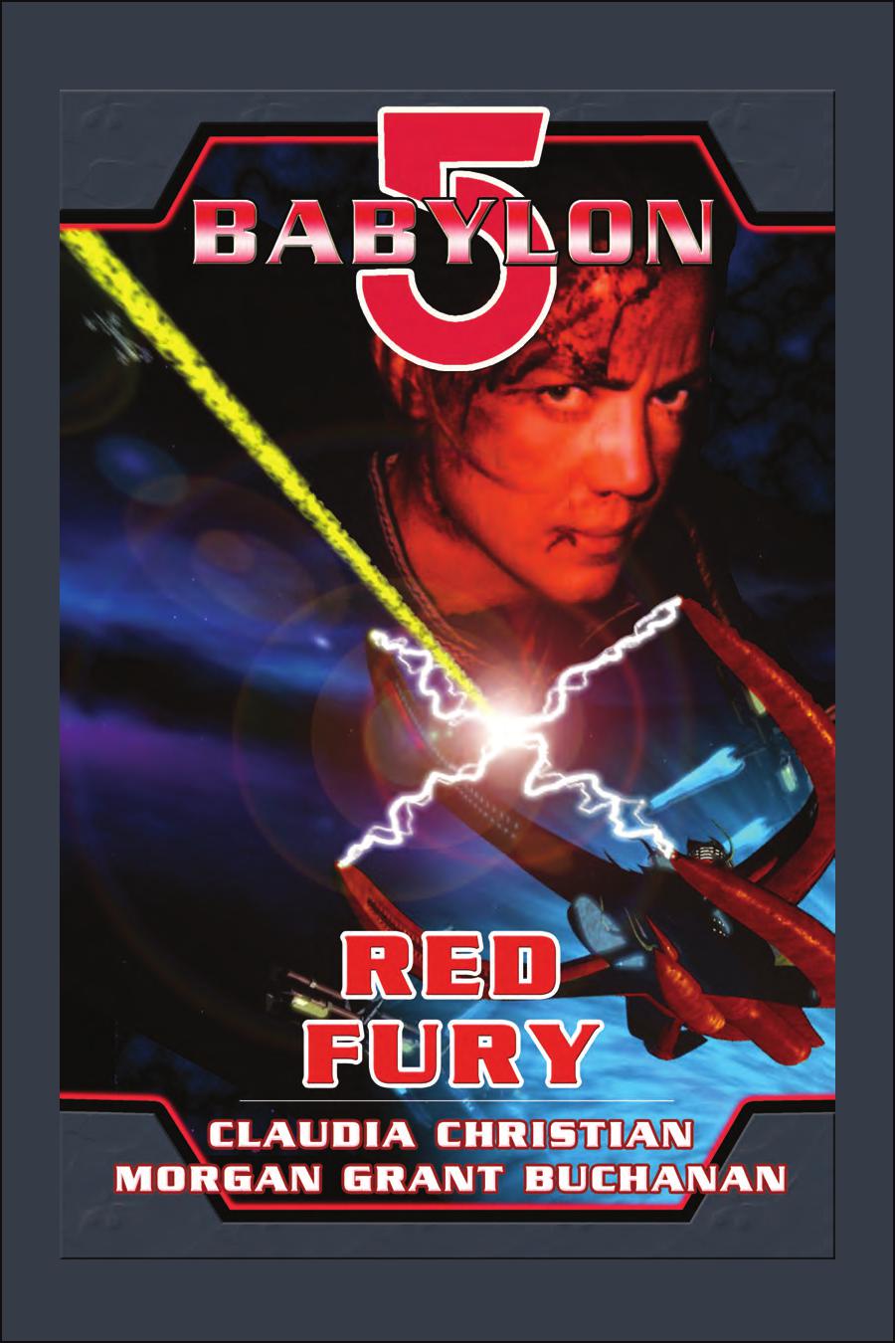 enjoyment. It is not to be sold or republished for profit for any reason.

All of the characters in this story are fictitious, and any resemblance to actual persons, living or dead, is purely coincidental.

Note:
This story takes place towards the end of 2262 (after the conclusion of the events of Season 5). President Sheridan has arrested Lyta Alexander but Michael Gaibaldi has used his newfound power as President of Edgars Industries to ensure her release. Susan Ivanova has been captain of her Warlock-class destroyer
Titans
for a year. This story is self-contained but if you want to read the very first story to feature Ivanova and the Vorlon transport once owned by Ambassador Ulkesh (Kosh 2), read J.

Michael Garibaldi awoke to an irritating, unending alarm. The

clock beside his bed told him it was 2am and for a moment he thought he was back in his old, cramped quarters on Babylon 5. That had been the last place anyone had dared to wake him at such an ungodly hour.

But the bed he was lying on was almost as large as his entire room on the space station and he was covered with lavish, black silk sheets and wearing pajamas woven by the insectile hands of a Gaim Queen—

clothes which would have cost him three years’ salary when he was a Chief of Security. No, he was on Mars, living his new life.

Since taking over the day-to-day running of Edgars Industries,

Michael Garibaldi had become one of the wealthiest and most powerful men in the galaxy and he had firm expectations that, whatever other benefits the position brought with it, an undisturbed night’s sleep should be right at the top of the list. That had been his old life—woken up at all hours, having to sit in on every decision, manage every little thing.

Now he had people to do that for him. Garibaldi sighed and tapped a panel beside his bed, opening a comm channel. The holographic form of his assistant, Reynolds, was instantly projected into the air above his bed. Reynolds was a thin man, obsessed with detail, always sitting behind the same console—analyzing data, scouring through reports, collecting information that might be of interest to Garibaldi. He was a pedantic, particular man—qualities that suited his job perfectly—but he was prone to disturbing Garibaldi for reasons less than spectacularly important and now, now he had gone one step too far. He had broken the number one rule.

“Reynolds,” he said. “What did I specifically order you never to do?

“Unless it was the end of the world and Earth was about to go up in flames and all hell was breaking loose.”

“And I meant it. Literally. The. End. Of. The. World.
Is
the world going up in actual flames?”

“Do you know I was dreaming about bagna càuda. Have you ever

“Then you don’t know what you’ve just done.” And the man never

truly would. Normally Garibaldi’s sleep was plagued by nightmares—

things he did when the Psi Corps were inside his head, casualties he’d seen during the war, bad memories from the old days on Mars. He

seldom slept well. But not that night.

“I was back on Babylon 5,” Garibaldi said, “and I’d been piecing together the ingredients for bagna càuda for over three months, smuggling them in, one by one, and then it was finally there, right in front of me.

And then you woke me up. Nowadays I can have a swimming pool filled with bagna càuda if I want but I can never have that moment again, of tasting it after having to wait three excruciating months.”

“Yes, sir,” Reynolds said without any hint of emotion. It wasn’t the first time he’d been on the receiving end of one of Garibaldi’s anecdotal lectures.

“Our new intelligence satellites, the ones with the prototype

“A planet-killer?” Garibaldi asked, visualizing the massive Vorlon ships that could decimate an entire world with one concentrated

discharge of a beam weapon.

“No, sir. A smaller vessel. A Vorlon transport. Blood red in color.”

Garibaldi nodded. “Right. There’s only one of those left this side

of the Galactic Rim—the shuttle left behind by that crazy Vorlon ambassador they sent us after Kosh. He’s not back is he?”

“Our intel says your old comrade Susan Ivanova is piloting it.”

Garibaldi jumped out of bed and pulled on his robe, his mind racing.

Susan’s ship
Titans
, a Warlock-class destroyer, had been found to have hidden Shadow tech built into its systems. She’d worked together with Sheridan and Lyta Alexander to destroy it—they’d used the Vorlon ship to do the job. The end result was that the Vorlon vessel had ended up permanently integrated into
Titans’
systems, sealed away in a locked deck. Garibaldi felt a headache stirring at the back of his skull.

“The new one they’ve been pouring all their money into?” Garibaldi said in surprise. “With cutting edge defenses?”

“Another update, sir. The Vorlon craft has destroyed the Siberian base and is moving across the Bering Strait at high speed. What are your orders?”

“You were right to wake me up, Reynolds. The world’s not going up in flames yet but it might be by the time Ivanova’s done.”

“Do you want us to forward our intel to Earth Dome, sir? Or the

Alliance on Babylon 5? They don’t have our resources. They won’t even know what’s hit them until they start reviewing and analyzing data. We can give them a heads up, so they’re ready if she strikes again.”

“She’s only hit a satellite and a base, both Psi Corps property?”

“Yes, sir. And now she’s single-handedly tackling a squadron of the Psi Corps fighters. There’s a repeating message transmitting from her ship.”

filled with the sound of Susan’s voice. She didn’t sound happy.

Where is Bester? I keep going until I get Bester.

“Sir, if she can harness that kind of firepower it might take a half-dozen White Stars to stop her.”

“Then here’s what I want you to do, Reynolds,” Garibaldi said

calmly. “I’m going to have something sent to you.”

“I’ve got everything I need here, sir.”

“What you don’t have is a pot of bagna càuda,” Garibaldi replied with forced enthusiasm. “I want you to relax. Sit back and enjoy it.

Wait for more intel to come in.”

“Don’t notify Earth Dome, and you sure as hell won’t say a word to Babylon 5. Capiche?”

“Sir, innocent lives could be lost if she strikes again. The base she’s just hit suffered seventy-two casualties.”

“Enjoy your meal,” Garibaldi replied, shutting off the

Reynolds was pedantic but he knew how to follow orders. Garibaldi rushed towards one of the black steel walls of his vast bedchamber and pressed his palm against it. A hidden doorway appeared, leading into a labyrinthine network of tunnels. Garibaldi quickly traced out an intricate route known only to himself. He was short on time; his programming was already kicking in. Lyta Alexander had removed

all of the psychic protocols the Psi Cop Alfred Bester had woven throughout his mind—all except one. He was no longer compelled to betray his friends but buried deep inside his mind was a command that under no circumstances could he harm or knowingly allow harm to

Lyta had promised to remove that block only when Garibaldi had used his power and resources to utterly destroy the Psi Corps. Until then, he would not be permitted to take his revenge.

So what exactly had Bester done to piss Ivanova off? Something

stupid, that was for sure, because now she was on the warpath,

mounting a one-woman crusade. Or maybe that was all part of the Psi Cop’s plan? The command at the back of Garibaldi’s mind was already compelling him to warn Bester, to stop Susan, to preserve Bester’s life. Was this Bester’s little joke—to infuriate Susan and then sit back and wait, knowing Garibaldi would have no choice but to step in and intervene?

Garibaldi came to a stop before a large, impregnable door made

of quantium-80—an ultra-rare mineral that could only be found on one planetoid in Grid Epsilon. He didn’t need to punch in a security code or supply voice identification. The sensitive alien alloy from which the door had been forged had imprinted his form. He walked directly into it, activating the localized jumpgate that transported him from outside to inside his command center in an instant. Any intruder would go unrecognized by the door and live a very short life after being transported into hyperspace.

The room was filled with an extensive security station, similar to the one he’d had on Babylon 5, except this unit was state-of-the-art and hooked into a super computer deep beneath the Martian surface. It was the only man-made system to contain components loaned personally to Garibaldi by Draal, custodian of the Great Machine on Epsilon III.

When he’d retired from his short stint as Head of Covert Intelligence for the Alliance, Garibaldi made sure he had all the tools he needed to protect himself and those he loved.

Garibaldi knew he was a few hours ahead of the Psi Corps, EarthForce and the Alliance, time enough to uncover what had happened and make sure that, however things played out, the final move would be his.

unconscious mind to start scanning through the oceans of data floating about on the Inter Stellar Network, piecing the story together with every resource at his disposal. Information was currency and having it might mean the difference between life and death for his friend when the game played out—and he was determined that if he did have to stop Susan, that he would do everything in his power to spare her life.

Garibaldi suddenly remembered he had an outstanding task and

opened up a comm channel to the kitchen. “Can you have a pot of

“Yes sir,” a voice replied. “And one for yourself?”

“Maybe later,” Garibaldi said as he filtered through the thousands of news bulletins and military reports that raced through his mind,

A few minutes later, when he had a sense of what had happened,

Garibaldi punched a complex code sequence into his console and

opened a channel to Psi Corps HQ. The image of the man he hated

more than anyone in the universe appeared—a smug, self-satisfied smile upon his face.

Captain Susan Ivanova tapped her foot impatiently on the metallic deck as her Warlock-class destroyer
Titans
hurtled through space towards a sea of asteroids.

Scraps of Heaven by Arnold Zable
The Code by Gare Joyce
Your Bed or Mine? by Candy Halliday
Diablo by Potter, Patricia;
A Beautiful Struggle by Emily McKee
Dear Cary: My Life With Cary Grant by Dyan Cannon
Ellis Peters - George Felse 01 - Fallen Into The Pit by Ellis Peters
Journey into the Unknown by Tillie Wells
Slut by Sara Wylde
Owned by B.L. Wilde, Jo Matthews
Our partner