Read Back to the Beginning: A Duet Online

Back to the Beginning: A Duet 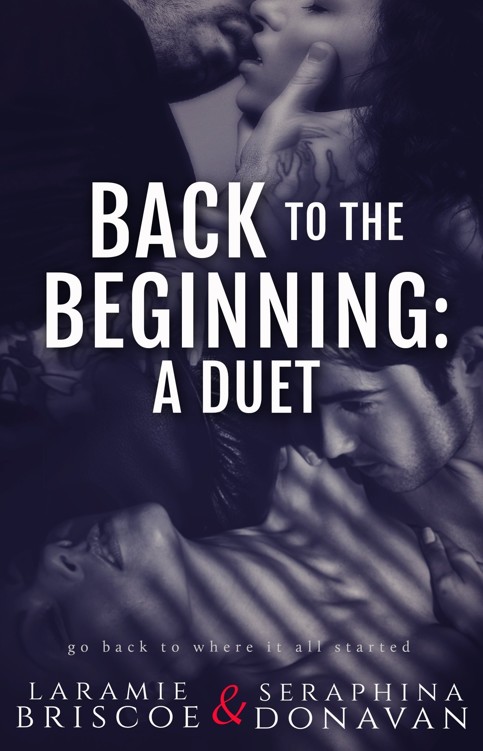 Back to The Beginning:

This book is a work of fiction and any resemblance to any person, living or dead, or any events or occurrences, is purely coincidental. The characters and story lines are created from the author’s imagination or are used fictitiously. Any trademarks, service marks, product names, or named features are assumed to be the property of their respective owners, and are used only for reference. There is no implied endorsement if any of these terms are used. Except for review purposes, the reproduction of this book in whole or part, electronically or mechanically, constitutes a copyright violation.

One Day at A Time

The Price of Love

If you want to keep up with new releases join my newsletter here!

For all the readers who’ve loved Liam and Denise since the beginning! If this is your first introduction to them – I hope you love them as much as the rest of us do!

All their responsibilities are time-consuming. They take hours, minutes, seconds away from time that could be spent strengthening their relationship.

When Liam realizes he and Denise have done precious little communicating and loving lately, he takes her on a little road trip with one goal in mind—getting to know each other all over again, body and soul.

Amongst waterfalls, adult conversations, visits with old friends, and childless hotel rooms, the two of them get
back to basics
.

“I
t’s been a
long time since we saw the sun rise for any reason other than waiting up to make sure that Drew or Mandy came in from a date. Or because Tatum had a stomach flu and she cried all night.” Denise wrinkled her nose. “In fact, I can’t remember the last time we stayed up just for ourselves.”

Liam Walker smiled as he thought about the truth of those words. He chuckled softly as he pulled his wife, Denise, under his chin, kissing her on the top of her head. As parents of seventeen-year-old twins and a three-year-old daughter, they spent a lot of time watching the sun come up in a much different way than they used to. What once was them naked watching fingers of light filter through the curtains of their bedroom was now them sitting in the living room trying to figure out how they were going to punish the wayward brother and sister for being out too late or getting the youngest back to sleep after a bad dream. It didn’t happen often, but it was often enough, now that he thought about it. It happened enough that it interrupted their normal schedule, and when their normal schedule was interrupted, there was no alone time.

Grabbing her hand, he lead them over to his bike before checking that their belongings were stowed in the saddle bags he’d packed earlier. Once he was sure everything was where it needed to be, he got on the bike and held it steady for her so that she could get on. When he thought about it, it’d been even longer since the two of them had gone riding together. And what a damn shame that was. At one time it had been one of their favorite things to do together, second only to hanging out on their screened-in back porch.

“You ready?” Liam asked as he took the bike off the kickstand and moved to start it. Her fingers gripped his shoulders, and he stopped, looking back at her.

“You’re sure they’re going to be okay without us?” She pulled her bottom lip between her teeth. A wrinkle of worry in the middle of her forehead made him reach out and smooth it the best he could with her sitting directly behind him.

“Roni, Tyler, and B have this. Roni and B will make sure Mandy and Tatum are taken care of. Tyler will make sure Drew keeps Charity out of this house while we’re gone.” He tried to soothe her and put all her worries at bay. If they didn’t get out of this driveway and spend some time alone, he was going to murder someone who didn’t deserve it.

It had taken months to convince her they needed this road trip. Him being husband, father, and president of the Heaven Hill MC pulled him in a million different directions. Her being wife, mother, and the person everyone came to when they had a question pulled her in a million other. Two years into their marriage and they needed some time away. They needed it alone—without the stress of a three-year-old, without listening to the twins fight, without being interrupted by someone in the club who needed something. For this long weekend, they would put their relationship and marriage to the forefront of everything. All other issues would take a backseat, and they would do nothing but concentrate on each other.

“If you think it’s okay, then I’ll trust you, Liam, like I always have.” She leaned forward on the bike and placed a soft kiss on his neck.

It was enough to make him shiver, enough to put him right back to the moment she’d walked into his life. Bent over, trying to find change in her car so that she could feed her hungry kids on her birthday. She was beautiful then, and goddamn if she hadn’t blossomed since. The years had not only given her confidence in their love and relationship, but it had given her a self-esteem she hadn’t had before. It turned him on in ways he couldn’t explain if someone had asked him to. All he knew was that his wife was his world, and he couldn’t wait to make that world his entire focus for three full days.

Reaching back, he squeezed her thigh, letting her know how on board with this he was. “Things are gonna be fine, babe. We have our cells if things go tits-up here, but I think it’s going to be great. I think you’ve yelled at the kids enough for the past few months, and I’ve lost my cool the last four times we’ve tried to get our groove on. If nothing else, hopefully we come back in better moods.” He felt horrible saying that, but he needed to be an adult with her, and there were too many things happening for them to do that. The three years since Tatum’s birth was a long time not to let his freak flag fly, and he needed this more than he needed his next breath.

She nodded, even though he couldn’t see her. If there was one thing Denise had learned in their years together, it was to trust her husband, because everyone else did. No one questioned him or his authority, and he always made sure things worked out. There was absolutely no reason she should be doubting that. Hell, she hadn’t doubted it when he came into her life four years ago and turned it completely upside down, around, and sideways.

Finally
. Liam grinned to himself. It had only taken her an hour to relent, and he’d planned for two before they made it out of the driveway. Things were already going better than he’d thought they would. Maybe she needed this even more than he’d thought. In the end, she wasn’t putting up much of a fight.

“Where are we going, by the way?” she asked as he turned around to wave at their friends, who provided a strong unit with their kids. She tried not to think about how happy the twins looked as they got ready to drive away.

He effectively cut her off by starting the bike and pulling down their driveway. If he had his way, they wouldn’t see this stretch of land for three full days, and he had to admit to himself, that felt good.