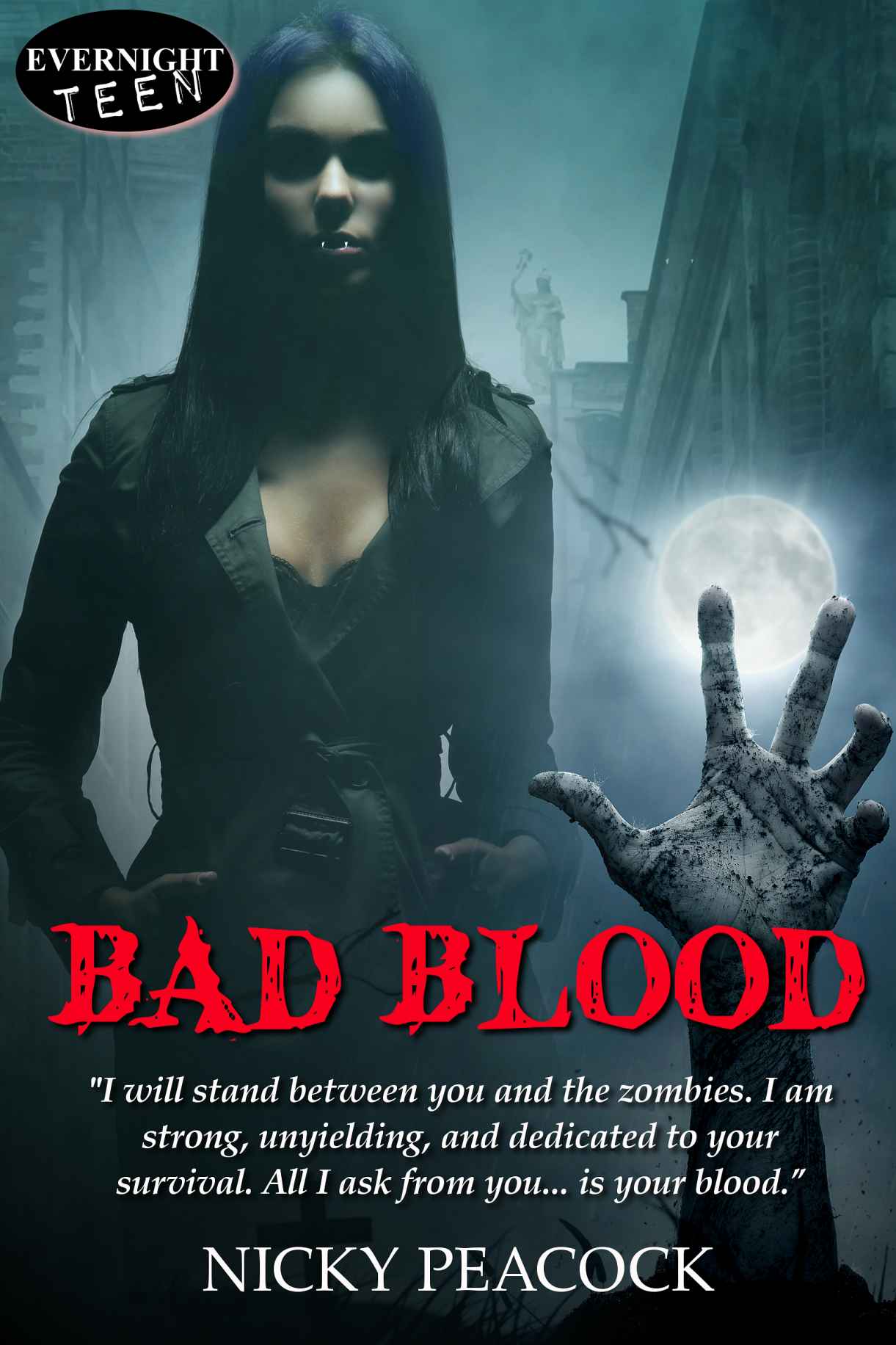 Battle of the Undead, 1

I repositioned myself so I could see down the edge of the building and into the dark alley below. The whole scenario was so cliché it made my butt pucker, but hey, that was my life
—one giant, shadowy cliché. Below, a damsel, clearly in distress, wearing a belt masquerading as a skirt, was being stalked by a newborn creature of the night. I could tell he was barely three months made. He wobbled around like a drunken uncle at a wedding. With his new heightened speed and strength, he’d gone from infant to superhero in one short, bloody step. It was a long time ago now, but I remembered what it was like—opening doors and pulling them off their hinges, throwing down innocent objects and embedding them ten inches into stone floors.

You had to learn your motor skills all over again
. The process was neither easy nor pretty.

The heels on the damsel's boots were far too high and made an incredibly irritating, hollow clicking as she quickened her pace. She must have sensed he was behind her, lurking in the shadows waiting to strike. Even if she hadn’t seen him yet, she’d have sensed him. Prey, even ones who wear
“come eat me” outfits, almost always sense that a predator is near, especially when that predator is fumbling around like a newborn fawn on an ice rink.

I waited for her to reach the edge of the alley before making my move. Dispatching perpetrators was difficult enough without adding in a witness intent on hugging and thanking me for saving her short, little, pointless life.

Although a lady never reveals her age, I was old enough that my every movement was fluid and precise. I’d done my time acting like the Hulk in a china shop. I’d been human for a little over nineteen years and a vampire for over four centuries. I found jumping off a building as easy as stepping off a curb and, yeah, just as exciting.

A rush of updraft spread my long, electric-blue hair behind me like a set of soft
, dark angel wings flapping in my vigilant peripheral vision. I landed square between the new vampire and his intended victim, who would now be able to continue her young life and perhaps grow up to buy a skirt that fell below the knee. I mean, come on, never mind decency, the British weather alone made her outfit an impractical age-defining choice. I felt cold just looking at her!

The vampire took one look at me and ran. He’d been warned
. Of course he’d been warned. He was one of Nicholas’ brood. I was probably the first topic of conversation Nicholas had with any of his new little children—"If you see a blue-eyed, blue-haired, tall girl dressed in tight red jeans, a Sex Pistols T-shirt, and a blue biker jacket, run for the hills." That was exactly what the newbie did. He bit down on his pride, turned tail, and sped out of the alley. With the realization I probably wouldn’t make it back in time for
Dr. Who
, I sighed and followed him.

At night, the streets of
London are dark and dingy. Due to the government’s penny-pinching, every second lamppost was off, leaving the city a hotbed of shady crime. Perfect for the likes of me, who didn’t want average Joe to see her. Also perfect for the likes of the newbie vamp who was now practically launching himself across each road in a desperate bid to control his movements and get the hell away from me. His limb-flailing became more Muppet-like as he proceeded, and I followed him easily enough. Of course he ran straight into another darkened alley, classic horror-victim mistake. If someone is chasing you, it’s best to stick with the crowds. Even
I
wouldn’t kill someone when a horde of random strangers carrying mobile phones could be taking photos and uploading videos straight to YouTube. Said strangers wouldn’t get involved and help, but they would gladly capture every gory moment for world titillation and their God-given right to five minutes of fame.

I smiled as I watched him catching his breath behind an industrial bin that, even from a distance, smel
led like week-old Chinese food. Yes, we vampires do breathe when we’re newbies, although it’s more of a reflex than a necessity. Even now, I still find myself taking the odd breath in and out. It’s a habit that’s hard to break.

I leapt onto the top of the bin and lean
ed down into the newbie’s face. We’re all exceptionally pale, but he went even paler when he saw me. His eyes had a kind of tiger-in-the-headlights glaze. Predators never expect to be caught by other hunters.  They’re meant to be top of the food chain.

“You belong to Nicholas?” I asked. It’s only polite to check your facts when you’re looking to kill someone.

He paused and then shook his head. “No.”

“Don’t be like that. Tell me the truth.”
I narrowed my eyes. He smelled like Nicholas, a scent that had wormed its way into my very being, as I, too, had once reluctantly belonged to him.

“Yes.” He whined a little and averted his gaze.

Never underestimate instincts. You’re born with them for a reason.

“Okay, then, let’s get this over with quick.”

I slipped down in front of him then punched him in the gut. He doubled over. I brought my knee square into his face. The momentum pushed him over onto the ground. I put my boot on his chest and held him down while I pulled out my trusty hand scythes.

“Please, I wasn’t going to kill her.”

Yeah, right. Blood to a newbie was like Pringles—once you popped, you couldn’t stop. It was only when you got older that you needed less, less of everything really—blood, sleep, companionship…

Sometimes it’s hard to kill them. I remember being made a vampire against my will, and I always wonder
ed how many I killed were also reluctant victims. I see them cowering and think,
There but for the grace of God go I.
Those thoughts are always fleeting, though, like a starving bird freed from a cage.

My slight hesitation was enough for him to swipe my legs out from under me. I fell back, my arms reaching for the bin to steady myself. My hand caught in a puddle of bin juice. The smell and feel made me lose my balance, and I slipped to the ground. Newbie saw his opportunity, although, quite frankly, he wasted it. He should have run away
. Even with his jerky, uncoordinated dash, he’d have outrun me to fight another day. But he didn’t. He chose to grab for glory and to try to kill his master’s enemy. Moron.

He straddled me, and I saw that familiar glint of a cocktail of madness and violence in his eyes.

“I’m the one who will kill the great Britannia, init special?” he spat.

Through the centuries, I’d adopted a lot of slang to get me by through the changing time periods
—beatnik “man” in the sixties, punk “anarchic” in the eighties, and even grunge “dude” in the unfortunate nineties, but “init” was just a step too far. I refused to be a chav and bastardize the English language with urban text-speak.

I rolled my eyes then flipped myself forward, sending him flying off me and into the nearest wall. As he struggled to regain his balance, I launched myself onto him, pinning him to the ground. The time for talking was over, so I raised my right
hand scythe and sliced off his head. Against popular belief, this is the one and only way to kill a vampire. No wooden stakes, daylight, or fire, just a simple sharp edge, a roll, and a dull blade caked in blood can end a life that’s spanned years, centuries, or even millennia.

I picked up the body and threw it into the bin, which splashed a little more of its rancid juices on my Sex Pistols T-shirt. Great. Oh, and another issue with being a vampire—your sense of smell is heightened, so really nasty stuff like bin blood makes you want to gag and then some. I regained my composure, picked up the stray head, and cut off a lock of hair. I pulled out a red ribbon from my jacket and tied it about the lank strands to keep it from falling apart. I then popped it into my pocket.

Looking at my watch, I thought, if I hurried, I’d make it back in time for
Dr. Who
, so I flung the head into the bin, jogged to the edge of the alley, and hailed a black taxi.

Back at home
—an open-plan, luxurious flat by the Thames—I flicked on the television just in time to hear the familiar opening beat of my favorite show. I peeled off my jacket and took out the lock of hair. I picked up one of many stamped, addressed envelopes waiting on my writing desk, shoved the hair in, and slowly licked the gummy, sour-tasting end. All the envelopes were addressed to the same person—Mr. Nicholas Lord, who was the creator of the newly murdered vampire and of countless others whom I’d given haircuts to in the past. It was a petty gesture to send him a souvenir of my kills, but I am a petty person. At some point, you have to accept yourself for who you are, warts an’ all.

I stripped off and showered, relieving my senses of “Eau de Bin” whilst listening to the intrepid Doctor and his hapless companion battle with yet another bizarre alien race hell bent on cosmic mischief. The water, soft and warm, felt heavenly on my cool skin. It wasn’t until I saw ribbons of
color in the water from my most recent blue hair dye job that I realized I’d been in there far too long. I wandered out, smelling of designer toiletries, my thoughts lost in the dense post-murder fog that would descend after a kill. A fog that was unceremoniously penetrated by the shrill of my LMFAO’s “I’m sexy and I know it” ringtone.

The caller was “unknown.”  It could have been a random sales call. It would have been all too easy to press ignore, turn off my mobile, and settle in for the night to watch a host of mindless TV offerings. But I didn’t.

The phone went silent, not even a breath
. He was a vampire.

The Legend of Earth (The Human Chronicles Saga -- Book 5) by Harris, T.R.
The French Mistress by Susan Holloway Scott
A Princess Next Door (Rothman Royals Book 1) by Noelle Adams
Her Accidental Angel by Melisse Aires
The Ghost at Skeleton Rock by Franklin W. Dixon
Dark Destiny (Dark Brothers Book #4) by Botefuhr, Bec
The Bean Trees by Barbara Kingsolver
Orchards by Holly Thompson
Gracie by Suzanne Weyn
The Gates of Night: The Dreaming Dark - Book 3 by Keith Baker
Our partner