Read Bad Men Do What Good Men Dream: A Forensic Psychiatrist Illuminates the Darker Side of Human Behavior Online

Bad Men Do What Good Men Dream: A Forensic Psychiatrist Illuminates the Darker Side of Human Behavior 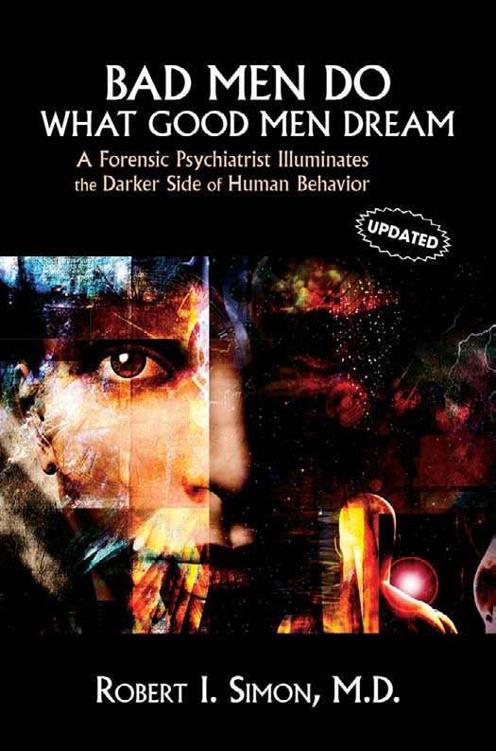 A Forensic Psychiatrist Illuminates the Darker Side of Human Behavior

A Forensic Psychiatrist Illuminates the Darker Side of Human Behavior

Note: The author has worked to ensure that all information in this book is accurate at the time of publication and consistent with general psychiatric and medical standards. As medical research and practice continue to advance, however, therapeutic standards may change. Moreover, specific situations may require a specific therapeutic response not included in this book. For these reasons and because human and mechanical errors sometimes occur, we recommend that readers follow the advice of physicians directly involved in their care or the care of a member of their family.

Your goodness has made many things possible and everything worthwhile.
The heart has its reasons which reason does not understand.

A
recent movie entitled
Mr. Brooks
tells the story of a vicious serial killer with a long history of murdering strangers. The movie begins, paradoxically, with Mr. Brooks receiving a “Citizen of the Year” award. This paradox is at the heart of this book by Robert I. Simon, M.D., in which this experienced, outstanding clinician and forensic psychiatrist describes in often chilling detail the “wolves disguised to live among the sheep.” But his analysis carries us further: to the wolf in everyone.

Sociologists have made the point that the human psyche has been subject in its history to three great blows to its narcissism. The first was delivered by Nicolaus Copernicus, suggesting that the earth, humankind’s home, is not the center of the universe. The second, delivered by Charles Darwin, was that humanity is not even a unique species but has evolved from precursors. The final blow was delivered by Sigmund Freud, who suggested that human beings are not even in conscious charge of their own minds, impulses, and decisions, but were influenced, if not controlled outright, by unconscious forces.

This last point brings us to the subject matter of this book. By demonstrating the parallels between the actions of “bad men” and the uncensored dreams of the rest of us, Simon has presented what amounts to a bid for tolerance and understanding, in the form of a forensic review of individuals he has so carefully and thoughtfully studied. He counsels—and, more meaningfully, demonstrates—the value of empathically understanding the “bad” in order to better appreciate and accept our own dark natures. He and I are of similar minds about this: Simon kindly quotes me as teaching—in regard to the most regressed, psychotic, or perverse patient my trainees are striving to treat—the maxim: “There, but for the grace of better defenses, go I.”

There seem to be two major dimensions to Simon’s thesis. The first is that unmistakably “bad” persons may seem very much like the rest of us. Leston Havens, M.D., notes that the differential diagnosis of a person labeled “psychopath” includes the label “normal.” Such individuals excel at social mimicry, blending into the population and revealing their true nature only when caught and exposed; the extreme version is the impostor psychopath, who may convincingly forge an entire false identity and live that second life without detection. The modern literary versions of this story are no improvement on Thomas Mann’s classic,
Confessions of Felix Krull: Confidence Man.

This mimicry accounts for the fact that psychopaths are found in all walks of life, not just in incarcerated populations. Law school, business school, medical school, divinity school—none can successfully screen out psychopaths, since these institutions select not for character (impossible in any case), but for competence, and many psychopaths are both extremely competent and highly manipulative in achieving their ends.

The second dimension of Simon’s thesis is the commonality of “the rest of us” with the various sinners and criminals he describes. By encouraging recognition and acceptance of our own dark sides, Simon strives not only for empathy but for an end to the polarization “we are good and they are bad.” This polarization, Simon makes clear, leads to the whole spectrum of problems from self-righteous egocentrism to genocide. Many mentally ill persons see the world in sharp black-andwhite, all-or-none ways; Simon proposes the more mature viewpoint that acknowledges shades of gray.

Perhaps a comment closer to the mark of Simon’s intent in this work comes from noted psychiatrist Harry Stack Sullivan, who commented that the schizophrenic is more nearly human than otherwise. Even with this most serious of mental illnesses, capable of profoundly altering the person’s mind, emotions and behavior, Sullivan encouraged looking beyond symptomatology to the essential humanness beneath. Simon has a similar goal: to reveal the humanistic core all humans share, even those distinguished by seemingly inhuman behavior.

In expansion of this latter theme, Simon points out the evils done by “good” men who are not enslaved by mental disorders: the
petit fonctionnaires,
the petty bureaucrats, for example, who kept meticulous business records of the victims sent to the Nazi death chambers, providing the embodiment of Arendt’s banality of evil. Sadly, we need not

look as far back as the Second World War to find ordinary people apparently treating alleged terrorist detainees with probably illegal inhumanity, seemingly with the same psychological rationalization that Simon describes: “These are the enemy and deserve no better.”

For those who, even after reading this work, remain resistant to the idea of a “dark side” in ordinary people, we might note the current public fascination with serial killer narratives, police and crime scene procedurals, and similar materials in books, films, and television programs. These varied art forms likely provide vicarious gratifications of the impulses and fantasies that Simon so evocatively details.

In the end, this book should be read not only for its fascinating, riveting, and disturbing case histories, but also for its essential humanity in encouraging understanding of the most deviant of human behavior and in accepting the ubiquitous evils of which most of us, fortunately, only dream.

T
he proposition that not very much separates “good” and “bad” persons is difficult for many people to acknowledge. To some who consider themselves good, the very idea is an abomination. But I view the belief that we are good and that badness exists outside of ourselves as a fiction—the fiction that drives the engines of prejudice and discrimination, and, on a larger scale, of terrorism, wars, and genocides. It destroys the healing potential of empathy, not only for others but also for ourselves. Denial of mankind’s dark side, and projection of it, allows demonization and extermination of others, of whole countries. The serial killers, the evildoers, the psychopaths described in this book justify their criminal acts by calling their victims “trash,” as the Green River Killer declared. The reality is that “good” persons are not always good and that “bad” persons are not always bad. There are no saints among us.

Throughout this book, I try in various ways to answer the difficult if not impossible question: Why do bad men do what good men dream? Dostoyevsky recognized that this was a conundrum when he observed, “While nothing is easier than to denounce the evildoer, nothing is more difficult than to understand him.” In my analysis of the evildoers in this book, the answer to the “why” question is evident in some cases, at least to some extent, but in most others a definitive answer continues to be elusive.