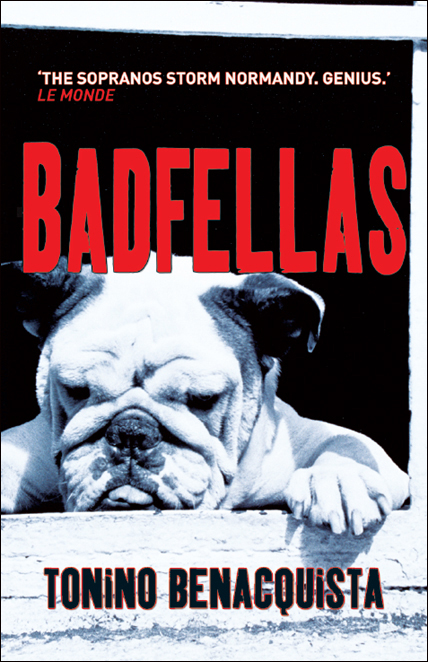 Tonino Benacquista, born in France of Italian immigrants, dropped out of film studies to finance his writing career. After being, in turn, museum nightwatchman, train guard on the Paris–Rome line and professional parasite on the Paris cocktail circuit, he is now a highly successful author of novels and film scripts. Benacquista won a César in 2006 for the script of Jacques Audiard’s
The Beat That My Heart Skipped
. Benacquista was introduced to English-speaking readers by Bitter Lemon Press with
Holy Smoke
, a darkly comic crime novel set in Paris and southern Italy. This critically acclaimed title was soon followed by the bestseller
Someone Else
and
Framed
, a satirical mystery novel set in the world of Parisian art galleries.

First published in French as
Malavita
by

All rights reserved. No part of this publication may be reproduced in any form or by any means without written permission of the publisher.

The moral rights of the author and the translator have been asserted in accordance with the Copyright, Designs, and Patents Act 1988

Note from the Publishers

The names of the characters depicted in this work have been changed to protect their identity. Similarly, the picture of the dog on the cover is not that of the Australian Cattle Dog Malavita who is currently at large.

They took possession of the house in the middle of the night.

Any other family would have seen it as a new start. The first morning of a new life – a new life in a new town. A rare moment that shouldn’t take place in the dark.

For the Blakes, however, it was a moonlight flit in reverse: they were moving in as discreetly as possible. Maggie, the mother, went in first, tapping her heels on the steps to scare away any lurking rats. She went through all the rooms, ending up in the cellar, which appeared to be clean and to have the perfect level of humidity for maturing wheels of Parmesan, or storing cases of Chianti. The father, Frederick, who had never felt at ease around rodents, allowed his wife to go ahead. He went round the outside of the house holding a flashlight, and ended up on a veranda piled high with old and rusty garden furniture, a warped ping-pong table and several shapes that were almost invisible in the darkness.

The daughter – Belle, aged seventeen – went upstairs into what would be her bedroom, a square, south-facing room looking out onto a maple tree and a bed of miraculously persistent white carnations – they looked like a constellation of stars in the night. She turned the bedhead to the north wall, moved the bedside table and began to visualize the walls covered with all the posters that had travelled with her over so many years and across
so many borders. Belle’s mere presence made the place come alive. This was where she would henceforth sleep, do her revision, work on her movement and posture, sulk, dream, laugh and sometimes cry – all the things she had done every day of her adolescence. Warren, who was three years younger than her, checked out the next-door room without any real curiosity; he had no interest in views and harmonious layouts. All that mattered to him was having a supply of electricity and his own telephone line. Then, in less than a week, his complete mastery of the Internet would enable him to forget the French countryside, and even Europe, and provide him with the illusion of being back home, on the other side of the Atlantic, where he came from, and where he would one day return.

The villa had been built in 1900, of Norman brick and stone, decorated with a checked frieze across the façade, and festoons of blue-painted wood along the roof, which also had a sort of minaret overhanging the east–west angle of the house. The wrought-iron curlicues on the entrance gate made one want to visit what looked from a distance like a small baroque palace. However, at this time of night, the Blakes couldn’t have cared less about the aesthetics of the place, and were only concerned with its comfort. Despite its evident charm, the old building couldn’t conceal its shabbiness, and was certainly no substitute for the little jewel of modernity that had been their home long ago in Newark, New Jersey, USA.

All four of them now gathered in the drawing room, where, without a word, they removed the dust sheets which covered the armchairs, sofa, coffee table and as-yet-empty cupboards and shelves. Inside the
red-and-black brick fireplace, which was big enough to roast a sheep, there was a plaque depicting two noblemen wrestling with a wild boar. Fred grabbed a whole lot of wooden knick-knacks from the cross-beam and threw them into the hearth. He always wanted to smash useless objects.

“They said they’d bring it tomorrow,” said his mother.

“Really tomorrow, or tomorrow like last time?” asked Fred, just as worried as his son.

“Look, you two, I hope you’re not going to attack me every time there’s some object missing in this house. Why don’t you just ask
them
.”

“The TV isn’t just some object, Mom, it’s our connection to the outside world, the real world, outside this crumbling shack in this rat hole full of peasants we’re going to be lumbered with for years maybe. The TV is life, it’s my life, it’s us, it’s my country.”

Maggie and Frank suddenly felt guilty and couldn’t answer. They didn’t even challenge his bad language. They realized Warren had a right to be homesick. He had been just eight years old when events had forced them to leave America; of the four of them, he was the one who had suffered the most. Changing the subject, Belle asked what the town was called.

“Cholong-sur-Avre, Normandy!” Fred replied, making no attempt at a French accent. “Think of all the Americans who’ve heard of Normandy without knowing where the fuck it is in the world.”

“Apart from our boys landing here in ’44, what’s Normandy famous for?” asked Warren.

“We used to get that at Cagnes-sur-Mer, but we had the sun and the sea as well,” said Belle.

“We used to get it in Paris too, and that was Paris,” said Warren.

They all had happy memories of their arrival in the capital, six years earlier. Then circumstances had forced them to move down to the Côte d’Azur, where they had stayed for four years, until Fate had struck again, and they had ended up here in Cholong-sur-Avre in the Eure.

They then split up to explore the rooms they had not yet seen. Fred stopped in the kitchen, inspected the empty fridge, opened a few cupboards, put his hand on the ceramic ring. He was satisfied with the layout – he needed a huge amount of space for when he fancied making a tomato sauce – he stroked the wood of the butcher’s block, the tiling by the sink, the rush seats on the stools, and picked up a few knives, testing the blades with his fingernail. He always began by touching things, treating new places as if they were women.

In the bathroom, Belle struck poses in front of a splendid, slightly spotted mirror in an ancient mahogany frame surmounted by a little matt-glass rose-shaped lamp holding a naked light bulb. She loved her reflection there. Maggie, for her part, opened her bedroom windows wide, pulled the sheets out of their bags, pulled the blankets down from the top of the cupboard, sniffed them, decided they were clean, and unrolled them onto the bed. Only Warren went on wandering from room to room, asking:

“Has anyone seen the dog?”

The ash-grey Australian Cattle Dog, christened Malavita by Fred, had joined the Blake family as soon as it had arrived in France. Maggie had had three reasons
for adopting this little hairy animal with sticking-up ears: she would be a popular welcome present to entertain the children, as well as a cheap way to buy their forgiveness and make them forget their exile. Thanks to her astonishing tact and discretion, she had easily made herself popular. She never barked, ate neatly, mostly at night, and spent most of her time asleep, usually in a cellar or laundry room. Once a day they thought she was dead, and the rest of the time just lost. Malavita led the life of a cat and no one could argue with that. Warren finally found her, as expected, in the cellar, between a boiler on pilot and a brand-new washing machine. Like the others, the animal had found her corner, and had been the first to go to sleep.

Life in France had not put an end to the breakfast ritual. Fred got up early in order to see his children go off with a full stomach, giving them his blessing, sometimes parting with some extra pocket money or an invaluable piece of advice about life, before going back to bed with a clear conscience the minute they were out of the door. At almost fifty, Frederick Blake had almost never had to start his day before twelve o’clock, and he could count on one hand the days when he had failed to achieve this. The worst of those particular days had been the funeral of his friend Jimmy, his companion-at-arms from the earliest days of his career – nobody had dared show Jimmy disrespect, even when he was dead. The bastard had chosen to have himself buried two hours away from Newark, and at ten in the morning. It had been a tiresome day, from beginning to end.

Personal Demons by Lisa Desrochers
Who Let the Dog Out? by David Rosenfelt
BWWM Interracial Romance 6: Her Protector by Elena Brown
Identity Matrix (1982) by Jack L. Chalker
El asesinato como diversión by Fredric Brown
The Followed Man by Thomas Williams
The Earth-Tube by Gawain Edwards
A Snowy Night by Skylar, Layla
The Kill by Allison Brennan
The Crooked Letter by Sean Williams
Our partner