Read Badluck Way: A Year on the Ragged Edge of the West Online

Badluck Way: A Year on the Ragged Edge of the West 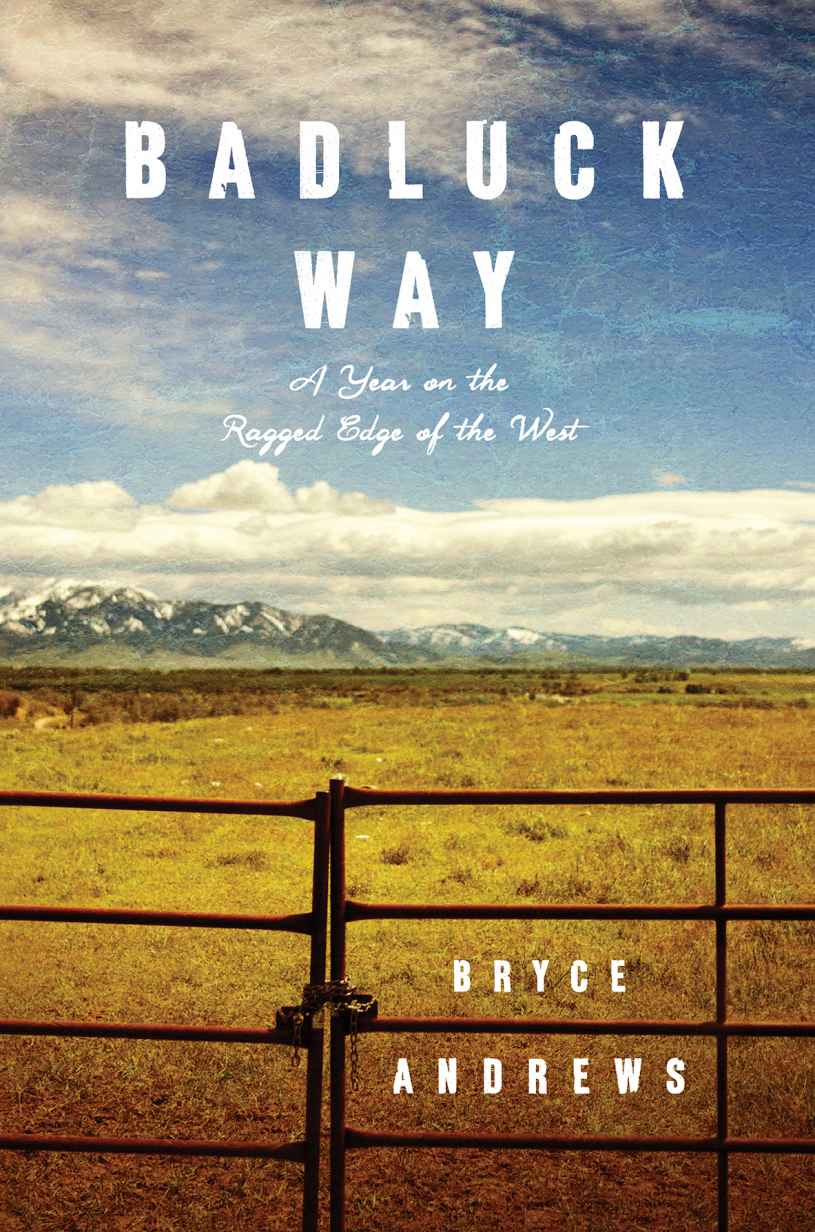 “In this unforgettable memoir, Bryce Andrews conjures the modern West with all its grit and conflict. At its core lies the old grudge between livestock protection and predator control. This fine memoir contains meticulous details of onerous ranch work—the unexpected violence of herding cows, the backbreak labor of building fence. Haunting and lyrical, this marvelous work belongs on everyone’s bookshelf alongside other Western Classics.”

—Craig Lesley, author of
Winterkill
and
The Sky Fisherman

“One could find no better guide than Bryce Andrews for a journey along the shifting border between the wild and the tame; a daunting frontier filled with unsettling truths, blood, and beauty. His wonderfully crafted prose is lean, yet rich in the telling details of seasons spent on a Montana ranch overseeing a shaky coexistence between cattle and wolves. Andrews is a keen-eyed ecologist, a skilled ranch hand and, best of all, a self-examining student of life with a young man’s inclination to push past fear and caution toward an embrace of risky, life-altering experience. In
Badluck Way,
Andrews shuns both cowboy romanticism and environmentalist sermonizing and illuminates the inescapable conflict between human economic imperatives and the compulsions of animal instinct. His book is a gripping tale of the West, raw and real.”

—David Horsey, columnist and cartoonist for the
Los Angeles Times

“Bryce Andrews’s
Badluck Way
is a powerful invocation of place and landscape narrated in a voice energetic, earnest, and wise. Year-round ranch work—tough, physical, and weathered—combined with a hard-earned regard and affection for animals—both livestock and wild creatures—thread together to renew our faith in the power of place, the value of work, and the ever-present need to interrogate our own lives and livelihoods.”

“
Badluck Way
addresses clearly, concisely, and eloquently a year when individual belief, faith, and philosophy are tested and tempered daily by the physical, communal, and political. On Montana’s Sun Ranch, . . .
grass, granite, and ice, wolves, elk, livestock, and humans coalesce to shape in sharp relief the vital and contentious issues facing our region and society. Andrews offers a remarkably rounded, informed, and yes, wise, perspective.
Badluck Way
is a powerful testament from a new writer with much to share.”

—Robert Stubblefield, the University of Montana

PART I: ON THE SUN

Eastbound to the West

The Lie of the Land

Under the Postcard Sky

Leaving the Road Behind

The Silence That Followed

W
hen the sun dropped behind the highest ridge of the Gravelly Range, I sat on my front porch and watched daylight quit the Madison Valley. In April, at six thousand feet, night came quickly.

Once the big orb winked out of sight, the day’s hard, pale light and meager heat poured across the western horizon in a torrent. Warm colors went first and fastest, balling up in an eddy of red, orange, and ocher before slipping from view. I imagined those hues flowing across the Gravellies to glint on the small-town storefronts of Twin Bridges and reflect in the slow oxbows of the Beaverhead River. I pictured them gaining speed as they fled westward through the Big Hole drainage and then skipping like stones across mountains, valley, mountains, and so on to the sea.

The other, colder colors drained more slowly from the sky, moving across the valley in procession, each rising above the towering bench behind the house and tracking west by degrees. Green came first, then every hue of blue. The last color in the train was fathomless, abyssal. It lingered, a deep, pelagic shade that rolled slowly through the world, enveloping everything and leaving full darkness in its wake. The crescent moon followed some distance behind it, like a tagalong kid brother.

I was alone in the cold, crystalline night, thirty miles from a town of any consequence, staring out across the seldom-traveled
gravel track that we on the Sun Ranch called Badluck Way. The failing light made it easy to remember the land as it had looked in summer. In my mind’s eye the hills glowed golden under a late-July sun. Tall, drying bunchgrass bent against the wind and fed the ranch’s vast herds of cattle. Antelope scudded across the horizon like clouds before a storm, and half a dozen gin-clear creeks tumbled downhill between stands of green, close-set willows. Above it all, in the high country, wolves and other wild creatures made endless, inscrutable loops across the ridges and valleys.

The bustle and toil of life in August—long days on horseback and barbwire fence work—had raised a thick network of scabs and scars on my hands. Some of the scars remained, but they were the least of the high season’s bloody relics. Staring into the darkness beyond Badluck Way, I returned to the moments that had demanded violence of me. Alone in the dark I threw old punches again and set my finger against the rifle’s trigger once more.

After one year on the Sun Ranch, a year of work, sweat, and hard choices, I was thinking about leaving. Dwindling snowdrifts dotted the landscape, some sculpted by the wind, others the consequence of my winter plowing. These latter piles stretched out along the road for half a mile and stopped at the intersection with Highway 287. I strained to see beyond the highway, to the dense willows that grow along the Madison, but the night was too complete.

The high and faraway whine of a diesel engine spooling up from the south reached me, building in volume and complexity. In the perfect silence of the Madison, the sound of a tractor-trailer switching gears was audible from miles away.

The truck appeared suddenly, when it rounded a bend where
the highway swings wide around the river. Small amber lights outlined its cab and trailer. From a distance these resolved into simple geometric shapes—a long rectangle in hot pursuit of a straining right triangle. The truck roared past the turn for Badluck Way without slowing down, then picked up speed until it hit the big hill at Wolf Creek. It downshifted once, then again when the engine began to lag and groan.

Though he could not see it, the trucker was rising up from the plain of the Madison, climbing the grade to the Cameron bench. Through his left window, across the river, were the sheer basalt cliffs of the Palisades. To his right was the ranch’s North End. Beyond the little world of his headlights were seven square miles of open grassland, fifteen hundred grazing elk, and the wolves that kept them moving through the night.

When the truck topped the hill, I stood to go back into the house. From a great distance in that vast, black landscape, the rig looked as lonely as an ocean liner.

My house on Badluck Way was a log prefab, designed in the shape of a wide H by an architect who never had intended to live in it. He’d drawn cramped rooms, sparse light fixtures, and a drafty brick fireplace that kept the place cold no matter how much wood was burning. The house must have come in two pieces, because the laundry room’s floor plan was a mirror image of the kitchen’s.