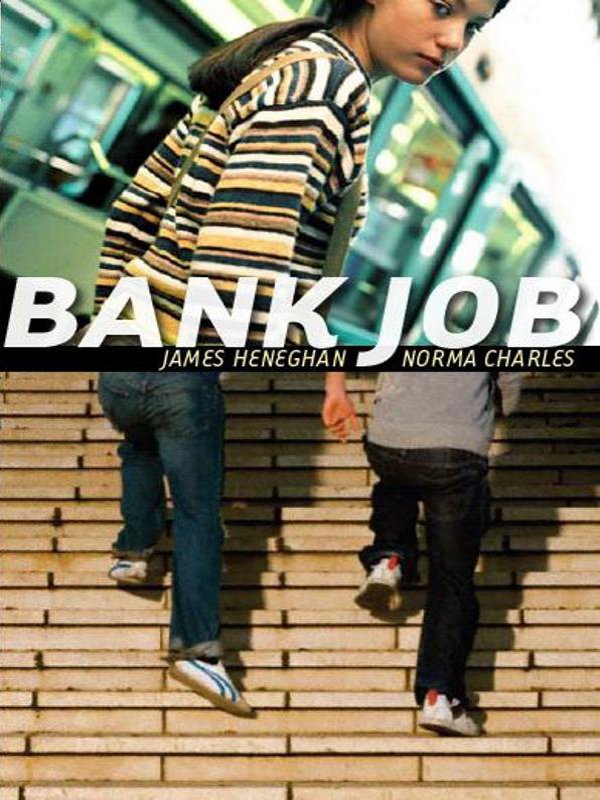 Summary
: Thirteen-year-old Nell and her friends are robbing banks to raise
money for renovations in their foster home.

To our favorite traveling companions,
Brian and Lucy.

A wet Tuesday afternoon is as good a time as any for a bank robbery.

Or so I tried to convince myself as I watched through the slanting gray rain as my friend got ready to rob a Vancouver branch of the Bank of Montreal.

I had a front row seat.

Down the street in the doorway of Cameron's Shoes, Tom Okada was probably cracking his knuckles while he waited.

Rush hour in Vancouver rushes for twelve hours, from six to six. The traffic on Kingsway was loud and heavy. I checked my watch. It was 2:50
PM
. My hands were trembling. I stepped back into the shelter of the doorway as I waited for Billy Galloway to give the signal.

Billy's big, with wide shoulders. He was wearing a blue ball cap, black-rimmed glasses, black mustache and a rain jacket. He tugged at his ball cap, pulling it down firmly on his head. This was the signal. It was time. Billy was going in. It was my turn to move.

My stomach lurched with dread. I felt like throwing up. I couldn't believe I was doing this. Crazy.

Chest thumping, I hurried into the bank and stood at an atm in the bank vestibule. There was no lineup inside the bank. I counted two customers and two women tellers.

Billy headed toward the younger of the two tellers, the one closest to me. His rain jacket was zipped up over his chin.

He passed a note across the counter.

THIS IS A BANK ROBBERY. YOU WON'T GET HURT IF YOU DO AS YOU'RE TOLD.

I knew what the note said because I had written it.

The teller reading the note looked like she was in her early twenties and wore glasses. Her face paled under her makeup and her hands shook as she reached into her cash drawer and handed over a fistful of bills.

I slipped out of the bank and waited in the rain, my shopping bag ready and my heart racing.

Billy came hurtling out of the bank and crammed his ball cap, glasses, fake mustache and the money into my shopping bag. Then he cut away sharply and disappeared around the corner onto Tyne Street.

I walked quickly in the opposite direction, forcing myself to be calm. Tom Okada, still waiting in the doorway of the shoe shop, grabbed my bag without a word, stuffed it into his backpack and took off in the direction of the SkyTrain station.

I stood in the doorway of the empty shoe shop, knees trembling so much my legs could hardly support me.

The scream of a police siren pushed my panic up a notch. I abandoned the doorway and tried to walk calmly along Kingsway towards the SkyTrain station. The police car swished past me, splashing through puddles, siren wailing.

I stopped, took a few deep breaths and checked my watch: 3:05
PM
. No need to hurry, I told myself. I didn't have anything on me that connected me to the robbery. I was perfectly safe. I forced myself to walk calmly and not attract attention. Heart still thumping, I hardly noticed the rain.

There weren't many people on the street because of the rain, but the SkyTrain station was busy. Loosely furled umbrellas dripped onto the platform in widening puddles.

I stepped onto the train and collapsed onto the closest seat with a huge sigh of relief.

It had worked! Amazing! I was stunned. We'd really pulled it off.

Eleven minutes later, at 3:16
PM
, knees still watery, I got off at Patterson Station.

By 3:32
PM
I was hanging my black rain jacket in the hallway at home. There were already two similar jackets there, one gray, the other green.

“Home” was Janice and Joseph Hardys' ancient two-story house on Oliver Avenue, in Burnaby's Patterson Hill area. It had green shingles, white trim and an old-fashioned porch. It was a foster home. Four kids lived at the Hardys'. First there was me, Nell Ford, thirteen. Most people called me Nails. Then there was Billy Galloway, the one who did the actual robbing of the bank. Billy was fourteen. Tom Okada was thirteen, same as me. The fourth kid, Lisa Connors, had been at school during the robbery. She was nine.

Patterson Hill is a good neighborhood; close to schools, close to Patterson Hill Park and close to Metrotown Mall. The neighbors are friendly. They knew that the two-story, green and white house on Oliver Avenue is a foster home.

The Hardys were not home from work yet. Janice worked part-time as a special education aide at Chaffey Burke Elementary from noon to three. She brought Lisa home with her. Joseph got home from his job in the lost property office at the Public Safety Building at six.

I pulled off my wet shoes and climbed the stairs. Billy and Tom had taken earlier trains and were waiting for me in their room. I sashayed in like a movie star about to take a bow before an adoring audience. They grinned at me, eyes wobbling with excitement.

I felt fine now. My heart was still speeding a bit but the trembling had stopped.

No one said anything until I'd closed the door.

“We did it!” yelled Billy, hooting as he bashed Tom with a pillow.

Tom jumped wildly on his bed, doing an excited chimpanzee routine, half crouching, fists dangling at the knees, gibbering and whooping. He grabbed a pillow and walloped Billy over the head. “We friggin' did it!” he cried.

I watched them proudly.

When the boys were tired of the pillow fight, we all huddled together, arms around one another's shoulders, and did a wild victory dance between the two beds. There wasn't much room.

We were the Three Musketeers.

We collapsed onto Billy's bed in hysterics, hooting and laughing.

“Show me the money,” Billy said at last, sitting up.

I grabbed the shopping bag from the foot of the bed and emptied it. We knelt on the floor and counted the money on Billy's bed, separating the bills into tens, twenties, fifties and hundreds.

The total came to fourteen hundred and fifty dollars.

Billy shoved Tom playfully with his shoulder. Tom shoved him back.

We were totally stoked.

The front door slammed. The sound of Janice's voice came up the stairs. “Nell? Boys? Are you up there? I need help bringing the groceries in from the car.”

The stolen bills were on Billy's bed. We had to get rid of them fast.

“Be right down,” Tom yelled back.

Billy scooped up the money and stuffed it into the shopping bag. “We gotta hide this.”

“Where?” Tom cracked his knuckles anxiously.

“You should tell us in case something happens to you,” Tom said. “We should know.”

I sighed. “Nothing's going to happen to me. Or to the money. We're all in this together. All for one and one for all. Ashes to ashes, dust to dust.” I gave them a two-handed closed-fist salute. Then I carried the shopping bag to the room I shared with Lisa. I turned on the light. The Chinese paper lampshade swayed in the draft from the window. Rain peppered the glass.

I shut the bedroom door.

It was easy to tell which side of the room was mine and which was Lisa's. Lisa was a neat freak, and she was cat-crazy. The design on her duvet cover was cats of all colors playing with balls of wool. Her pillow was a white kitten. A cat-shaped lamp sat on her night table. Also on the table was
The Encyclopedia of Cats
. Lisa studied it almost every night like it was the Bible.

My side of the room might have been a bit on the messy side. But it was a comfy mess. I hardly ever made my bed, although Janice kept bugging me about it. Janice had even tried to bribe me by buying me black sheets and pillows and a black and white striped duvet cover. The bribe didn't work though. I didn't see the point of making a bed every day when it just got all rumpled and messed up every night anyway.

One thing Lisa and I had in common was books. I had my battered copy of
Anne of Green Gables
that had been with me since I-don't-remember-when and one or two others, but Lisa had a lot. Her shelves were tidy, her books lined up like soldiers. Even though I didn't own many books, I loved to read. I borrowed some from the library at least once a week.

I had recently read
Pride and Prejudice
. I loved all the old-fashioned language. The girl in the book, Elizabeth Bennet, always said things like, “I am pleased to make your acquaintance,” or “I have not had the pleasure of his acquaintance.” And if a friend asks her what she thinks of someone she likes, she usually answers, “He is most amiable.” Amiable! It just breaks me up. Or she will say an acquaintance is “agreeable,” meaning he or she is okay but not quite as good as “amiable.” Amiable seems to be top-ofthe-line. Third in line is “tolerable.” Of course there's always at least one characterâthe villainâwho is “despicable.” After taking
P&P
back to the library, I started reading
Northanger Abbey
. Jane Austen rules.

On my night table I had a card that read,
Neatness is the first sign of insanity.
I got the idea when I saw the card on Tom's night table. His card read,
I used to be indecisive. Now I'm not so sure
. The cards summed up our characters pretty well, I thought.

I liked my roommate a lot in spite of her tidiness. I would say Lisa is most amiable. Besides, she's the closest thing to a sister I will ever have.

I opened the closet. Lisa's side was pastel pants and shirts, tidy on their hangers. My side was a jumble of dark sweats, hoodies and jeans from my favorite fashion shop, Value Village.

I knelt on the wooden floor and rummaged under the mound of clothesâmine of course, thrown out of sight until laundry timeâfor the shoe box I'd been saving. You never knew when a shoe box would come in handy. Now I had the perfect use for it.

I jumped. I hadn't had time to hide the money. I shoved the bag under the mound of clothing.

Her dark eyes sparkled behind her thick glasses. “His name's Pumpkin. Isn't he the most beautiful? Just feel how soft he is.”

Windburn (The Elemental Series #4) by Shannon Mayer
Born at Dawn by Nigeria Lockley
The Triple Hoax by Carolyn G. Keene
Deep Storm by Lincoln Child
Lord Dragon's Conquest by Sharon Ashwood
A Shared Confidence by William Topek
Bear-ly A Hero (Bear Claw Security 2) by Terry Bolryder
Cross Hairs by Jack Patterson
Nothing Ever Dies: Vietnam and the Memory of War by Viet Thanh Nguyen
You and Me by Veronica Larsen
Our partner