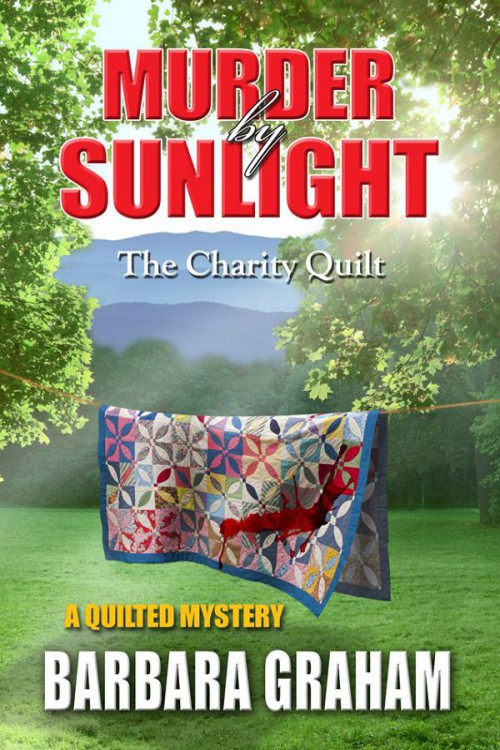 It’s coming up on the Fourth of July in tiny Park County, Tennessee, and Sheriff Tony Abernathy must deal with not just the heat and increased traffic, but a sudden wave of crime. Someone is going around assaulting people in an attempt to find "Bob." A man is found impaled on a tree, and a woman is murdered–by sunlight! Good thing the sheriff’s wife Theo runs the local quilting shop, where she can catch the gossip while a charity quilt is being made.

This novel is a work of fiction. Names, characters, places, and incidents are either the product of the author’s imagination, or, if real, used fictitiously.

No part of this work covered by the copyright herein may be reproduced, transmitted, stored, or used in any form or by any means graphic, electronic, or mechanical, including but not limited to photocopying, recording, scanning, digitizing, taping, Web distribution, information networks, or information storage and retrieval systems, except as permitted under Section 107 or 108 of the 1976 United States Copyright Act, without the prior written permission of the publisher.

The publisher bears no responsibility for the quality of information provided through author or third-party Web sites and does not have any control over, nor assume any responsibility for, information contained in these sites. Providing these sites should not be construed as an endorsement or approval by the publisher of these organizations or of the positions they may take on various issues.

This title is available as an e-book.

Mom, you are gone but not forgotten.

Numerous people have cheered me on, corrected my work, tolerated my mental excursions, and answered, more or less politely, any number of odd, inane, and frankly murderous questions. Thank you, all of you. I’m not naming names here—you know who you are. While you might have been tempted to cover my errors, pointing them out to me is a greater kindness.

Ones I must mention by name are:

Michelle Quick, for testing yet another mystery quilt for me. In spite of not enjoying mystery quilts, or maybe because of it, she does a wonderful job.

My husband for a bit of proofreading, a large dose of reality, and the willingness to play dead on command (the dogs won’t cooperate). My request usually begins with “you don’t need to know why, but . . .”

Alice Duncan, of course, editor extraordinaire, who sees what is invisible to me and encourages me to fix it. Now.

Finished size is approximately 49 by 61 inches. Fabric requirements given are generous and based on useable fabric widths of 40 inches. (The useable amount seems to have been shrinking.) This pattern assumes familiarity with basic quilt construction, quilting terms, rotary cutting skills, and an accurate 1/4″ seam throughout.

Fabric A—this fabric should be a non-directional print created with at least three colors.

Fabric B—a complementary contrast to A—it can be one of the less used colors in print A.

Fabric C—a blending fabric with A—for example, if A is a red/green/blue print, C might be a different blue print.

Fabric D—a high contrast to A—reads solid from a distance.

Cutting—be sure to label each with color letter and size.

From remainder of A:

From remainder of B:

Sheriff Tony Abernathy opened the door of his wife’s quilt shop and stepped outside into the summer sunshine. East Tennessee was enjoying a brilliant clear sky with only the normal blue haze over the Smoky Mountains, and no rain in the forecast. Late morning and it was already hot, the expected temperature for almost the Fourth of July, but not blistering. Maybe he could get home in time to do a little yard work. Then Tony remembered his wife had hired some help, freeing him to finish painting the new room built for the baby girls. He took a deep breath and sighed, savoring the moment. The smallest county in the state seemed pretty calm for tourist season.

“Say there, Sheriff.” A familiar, nasal voice addressed his left shoulder blade. “I voted for you and I could use a little of your time and help.”

Feeling a bit like he’d jinxed himself, Tony turned and looked down into the face of Clyde Finster. The middle-aged man peered up at him through water-spotted glasses, and a frown line creased his forehead.

“You might not remember my prize fish.” Mr. Finster spread his hands far enough apart to indicate a small whale. “It’s in danger.”

Intrigued in spite of his better judgment, Tony pulled his notebook and a pen from his pocket. “Tell me.” He thought Finster’s name was appropriate for a dedicated fisherman.

“After we, me’n the fish, won the big fish contest, I had it stuffed and mounted and hung it over my television.” Mr. Finster waved his arms about, almost hitting Tony in the face. “I had to move. Rent was too high on the house, and my friend Duke and his wife moved into my old place. They said I could leave just the fish on the wall until I was settled, and can you believe it? A few minutes ago I drove past and saw it out on the burn pile. What’s the matter with people?”

Wondering how the man could see anything through those spotted glasses, Tony jotted down the address. “How long did they keep it?”

There was a brief pause while the man worked out the mental math. “Not more’n five, maybe six, years.” Mr. Finster turned his head and wiped his dripping nose on the sleeve of his t-shirt.

Tony thought five days of staring at someone else’s prize catch might be long enough for him but didn’t say anything. “I’ll drive out and see what I can learn. If they’ve already burned it, there isn’t anything I can do. Five years might qualify as abandonment.”

Knowing his deputy, Wade Claybough, would never forgive him if Tony left him out of a sensational stuffed fish hunt, Tony radioed for him to meet at the address in question. Sure enough, when they arrived, about as far from town as possible and still within Park County, there was a large fish, mounted on a wooden background complete with a brass plate identifying the date it was caught and its size and the fisherman by name. Other than being big, although perhaps a bit smaller than the proud fisherman had indicated, it was an ugly, miserable-looking fish. Tony didn’t know if it had been deformed when it was pulled from the water, or if the taxidermist was an amateur and had altered it. In Tony’s favorite scenario, it had seen a reflection of itself, had a stroke, and accidently swallowed a hook with its last gasp.

A glance in Wade’s direction showed his deputy, staring, apparently mesmerized by the fish and the way its eyes were skewed at an unpleasant angle. The gaping mouth faced the viewer instead of a fake bug, and Tony thought the fish looked as though it had fangs. A vampire fish?

The nasty-looking fish trophy topped a mixed trash pile of dry brush, papers, and miscellaneous yard and kitchen garbage. Standing next to the pile was a tired-looking young woman in jeans and an oversized t-shirt celebrating chocolate. Dark circles rimmed her eyes and more mouse-brown hair had escaped the ponytail clasp than remained in it. She clutched a box of wooden matches in one hand and held an unlit match in the other. Tony recognized her from the grocery store where she was a checker. Her name was Beth and one of her sons played on his older son’s baseball team.

“I’ve gotten a complaint.” Tony didn’t get further before Beth waved the matches under his nose, stopping him.

“You think you’ve heard a complaint. I’ll give you another one. I’ll bet it’s about fish.” The fatigue in her face and posture vanished in a heartbeat, replaced by a fighting stance. She looked ready to take on any challengers. “That’s the ugliest thing I’ve ever seen, and I’ve looked at it every day since Duke and I moved in here. The kids are scared of it, and it takes a lot to scare my brood of boys. Even the cat won’t stay in the same room with it.”

When Beth paused to inhale, Tony said, “Why not call Finster and have him come get it, or at least put it out of sight in the garage?”

“Duke said every time he tried to talk about it, Clyde Finster was on his way somewhere and would be by in a few days. Well, his time is up.” She scraped the head of the match on the box and smiled at the flame. “Unless you want it.”

Tony did not want the grotesque fish. It was revolting to look at, but he decided to take it to its rightful owner. Being the sheriff in Tennessee’s smallest county often required him to do more “serving” than “protecting.” Even as he deposited the plaque and fish in the back of the Blazer, Tony felt nothing but sympathy for the woman and her family. The more he looked at the prize, the worse it appeared. He thought Beth deserved an award for keeping it so long.

The Courier (San Angeles) by Gerald Brandt
Message on the Wind by J. R. Roberts
Deceive Not My Heart by Shirlee Busbee
Play On: A Glasgow Lads Novella by Avery Cockburn
Death of a Kingfisher by Beaton, M.C.
An Ecology of MInd by Johnston, Stephen
A Different Christmas (University Park #5) by C.M. Doporto
The Darkening Archipelago by Stephen Legault
The French Girl by Donovan, Felicia
The Comfort Shack by Mark Souza
Our partner