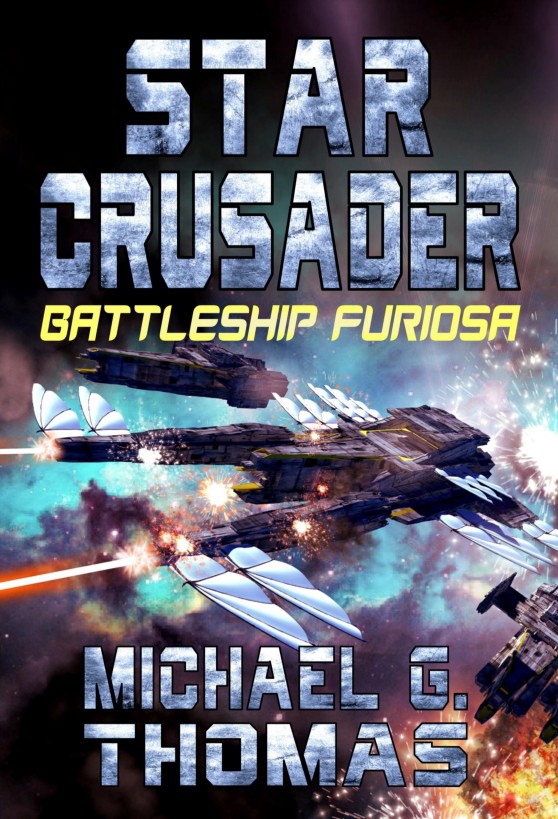 Part of the STAR CRUSADES
universe

All rights reserved. Without
limiting the rights under copyright reserved above, no part of this
publication may be reproduced, stored in or introduced into a
retrieval system, or transmitted, in any form, or by any means
(electronic, mechanical, photocopying, recording, or otherwise)
without the prior written permission of both the copyright owner
and the above publisher of this book.

This is a work of fiction.
Names, characters, places, brands, media, and incidents are either
the product of the author's imagination or are used fictitiously.
The author acknowledges the trademarked status and trademark owners
of various products referenced in this work of fiction, which have
been used without permission. The publication/use of these
trademarks is not authorized, associated with, or sponsored by the
trademark owners.

This eBook is licensed for your
personal enjoyment only. This eBook may not be re-sold or given
away to other people. If you would like to share this book with
another person, please purchase an additional copy for each person
you share it with. If you're reading this book and did not purchase
it, or it was not purchased for your use only, then you should
return to Smashwords.com and purchase your own copy. Thank you for
respecting the author's work.

B
attleship Furiosa was a holy relic amongst the Byotai, and
one of only three known Legion Class battleships still in service
at the time of the revolution. Her class was designed to carry
formidable weaponry suitable for prolonged engagements. Every part
of her hull was covered with gilt and sculptures commissioned by
each of her long-serving captains. Her long hull split apart at the
bow into a pair of long booms, each flanked by feather like
membrane wings. Multiple decks revealed partially open launch decks
and gun platforms, all protected by articulated and motorised
armour plating. At over five hundred metres in length, she was the
largest ship in the Imperial Navy and carried a staggering arsenal
that included no less than four thousand crew, a company of heavily
armoured soldiers, eight boarding shuttles, attached assault
cutters, and eighteen to forty fighters.

The Rift exploded with more energy than
even the most powerful ship-based weapon. White and blue arcs of
energy lashed out into the blackness of space, quickly falling back
into the whirlpool. No sooner had the explosion resided when a
series of large ripples pulsed and flashed with barely concealed
power.

Nate looked out of the left side
of his cockpit and watched the lightshow with fascination.
He'd seen Rifts in action before, and this was
one of the many permanent distortions in space-time. Ships could
use it to travel between two points.

"Stay alert,
pilots,
" said Lieutenant Commander
Holder, "This might be the one."

Nate nodded
but kept his eyes on the Rift. The crackling of energy had
been almost continuous for fifteen minutes, and still there was no
sign of the enemy. The Rifts only ever did this when spacecraft
were approaching the other side. As the minutes ticked by, he
became more nervous, and so did the other pilots in his
formation.

Nate might be among the youngest
of his fellow pilots, but he'd racked up more combat
simul
ation and training missions than
probably all of them. Even while attending Academy classes, he'd
spent every waking hour on the Star Crusader public simulation. His
instincts had proven correct more often than not, and he was now
familiar with every piece of fighter technology used by the
Alliance over the last generation. For all his experience, he'd
never even sat in a fighter until two and a half months
ago.

What are you doing out here?

He shook his head for what must
have been the tenth time and then looked ahead. Dust swirled about,
lit by the bright
remnants of its red
binary stars that had gone supernova long ago. Now their dim light
flooded the system, reflecting off the thin clouds of dust that
drifted like icebergs on a cold ocean. This region of space looked
very different to anywhere else he'd been. Fiorr Veej was its
Byotai name, and according to his reading, it literally meant Four
Doors. It was aptly named, because this was the heart of a bizarre
distortion in space that created a nexus of Spacebridges, or Rifts
as they were commonly known.

"Move on to waypoint six. Keep
your
eyes open," the Lieutenant Commander
ordered.

Nate
rolled his spacecraft to the right as the Squadron passed
the massive shape of the Alliance Warbarge ANS Promethium. They
were not particularly close as they rushed past its hull, but even
at a distance of four hundred metres away, it looked truly massive.
Nate was on the far left of the formation as the four fighters
moved along the flank of the vessel. As they passed by, a number of
the ship's turrets turned to track them. Radar scanners bounced
radio waves off each of them, setting off the internal alerts. A
quick glance to his right confirmed his comrades were still with
him. The sound of Lieutenant Commander Holder's voice snapped his
attention back to the front.

The four fighters
m
oved in a loose formation, staying at a
safe distance apart. Two bore the markings of the renowned Corsair
Squadron, while the pair to the left that Nate led bore the black
bird of prey on their flanks, marking them out as the newly
reactivated Knighthawk Squadron. As the fighters moved over the
shape of the ancient ship, Nate found his eyes drawn to its vast
bulk.

That is one ugly
brute.
Where did they find
that old relic?

He
had
seen the ships before, but only ever in simulation. There were nine
famous examples of them back at Sol. He had no idea any of them had
been shipped here. The Warbarges were an ancient design that dated
back to before the Great War. Apparently, this one was over eighty
years old, and Nate didn't doubt that. Unlike the rest of the
fleet, the Warbarge was capable of only altering its course and
required heavy tugs to move between planets. It was a mobile
fortification, nothing more, and had been effectively moored out
here as a guardian.

"Keep clear of the Warbarge. You
d
on't want to provoke that
thing."

The formation angled slightly to
the right and away from the warship. Nate shook his head as he ran
his eyes along its ugly shape. It looked more like a broken up ship
than a warship and consisted of three large hull sections, each
fused together and covered in layer upon layer of armour. The upper
deck and flanks bristled with twenty-four separate gun platforms,
capable of inflicting damage upon anything that strayed too close.
Nate sighed as the vessel shrunk into his rear view and then looked
at the overlay data.

Nate recalled the simulated
battle they had fought
back in the
Academy. It was set around the old Martian colony where Biomechs
had become established. Two of those Warbarges held off an entire
battlegroup for an hour. It was a battle Nate remembered well;
because it was the first time he'd fought alongside
Cassandra.

T
he
Lieutenant Commander’s voice burnt through his mind in a flash.
Without having to think, he double-checked the safeties and then
activated his burners. At the same time, he pointed the nose of his
battered looking Lightning IIA Fighter Bomber towards the next
three pre-selected waypoints that would take them on their patrol
circuit directly in front of the Rift.

Th
e
additional thrust pushed him into his seat as the fighter
accelerated ahead. This was one of the most recent variants of the
venerable design from Kerberos, making it one of the toughest
fighters ever constructed for the Alliance Navy. Its stubby shape
was made more unusual by its set of six stubby wings that
contributed to its renowned agility and heavy payload. It might
have been less elegant than the Lightning interceptor variants from
Terra Nova or Prime, but it was certainly the deadliest.

Nate ran his fingers over the
safety and flicked
it off. The fighter
was equipped with a substantial arsenal of weaponry, more than
capable of dealing with torpedoes, fighters, and even a small ship
if attacked in sufficient numbers. The ready indicator for his pair
of wing-mounted guns toggled green.

The engines of the four fighters
pulsed bright white as they hurtled forward at even higher speeds.
Though too far away to be seen, he felt more confident in knowing
that a veritable armada lay behind him. Even as Operation Hellfire
had been underway, the Admiral managed to contact High Command to
request enough ships to double his forces. Now the fleet had grown
from the measly fourteen ships to an impressive forty-one vessels,
including both an Alliance and a Byotai battleship.

We could go through
that Rift and hit them hard
.
Forty-one ships could end an empire
in one battle.

Deep down he knew that was the
wrong approach. The last information from the reconnaissance drones
had shown the enemy now had at least sixty ships in the Ararrh
System. By entering the
Rift, the
Alliance would merely be provoking an actual full-scale war, one
that they could potentially lose. It was one thing to fight a
rearguard action while leaving the sector, but to actually initiate
military action could prove the precursor to a total
war.

Nate shook his head and looked
down at the icons on his tactical display.
Behind them, just fifteen thousand kilometres away sat the
vanguard. Three ships of the Helion Battlegroup with their engines
burning brightly as they moved closer to the Rift; the largest of
them the recently commissioned Battlecruiser ANS Retaliation, the
flagship of her battlegroup. Behind them, at a distance of nearly a
hundred thousand kilometres sat the primary fleet, made up of the
combined vessels of the Orion and Helion Battlegroups directly in
front of the Rift that led back home to Helios Prime. Twenty-three
more Alliance capital ships and multiple squadrons of fighters and
gunships.

Mixed in with the formation were
another
nine ANA auxiliary ships, plus
the nine surviving ships of the Royal Fleet that had succumbed at
the Battle of Ctenosaura, chief among these being the dreaded
battleship, Furiosa. Of all the ships in the fleet, this was the
only vessel that came even close to the size and power of ANS
Warlord. The Legion Class of battleships were all generations old
and holy relics among the people of the Empire. Now just one
remained under the command of Prince Kratha, and it bore the scars
of the terrible bloodbath at Ctenosaura.

The other two
Rifts were almost a million kilometres away in opposite
directions, giving the impression of a giant crossroads that would
take at least six hours to travel between in even the fastest
warship. One led to the Khreenk border, but the second travelled
deep into the Deadlands and to the Serpentis System that bordered
along the disputed Tenth Quadrant, the area currently being fought
over by General Makos and his Byotai loyalists.