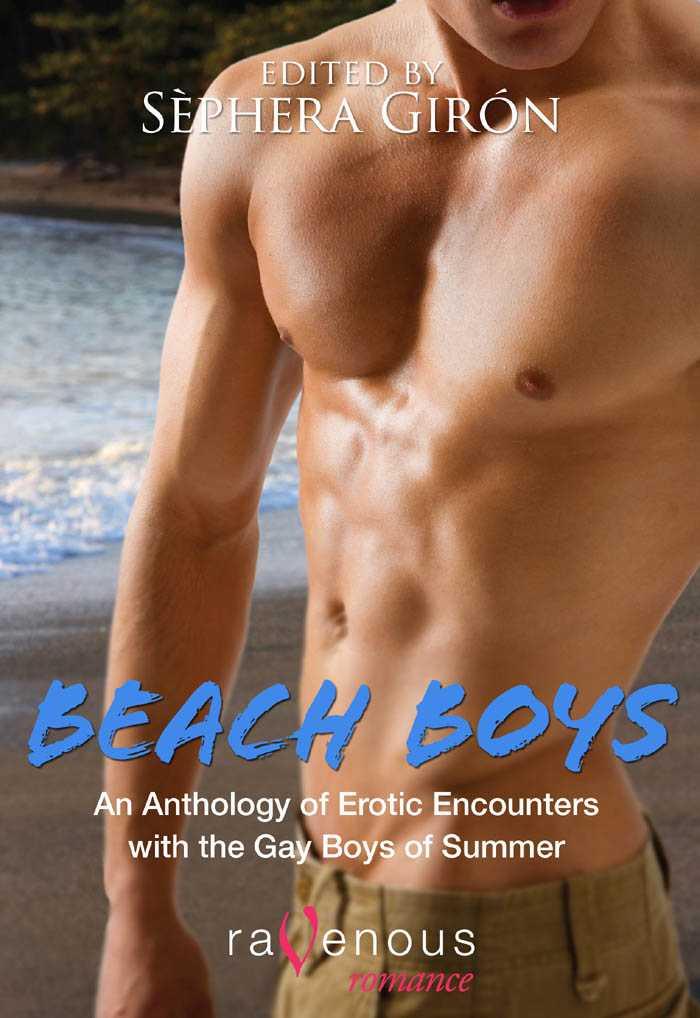 All rights reserved. No part of this book may be reproduced in whole or in part without written permission from the publisher, except by reviewers who may quote brief excerpts in connection with a review.

This book is a work of fiction, and any resemblance to persons living or dead is purely coincidental.

The End of the Earth
by Jen Bluekissed

Firsts: On the Kink Cruise
by Kaysee Renee Robichaud

Stranger on the Shore
by Clarissa Duquesne

Things He Leaves Behind
by Derek Clendening

Zombies on the Down-Low
by Ziggy Raht

Everything’s a trick, you know?

I mean the first time I saw Ferradini the renowned mentalist perform, I was still technically a cabin boy on Duchess Cruise Lines.

I stood toward the back of the packed auditorium and felt actual thrills racing from my heart to my head and down to my groin. He was just so elegant, so suave—so fucking smart. Up until the moment I saw him enter from stage right wearing a custom-made tuxedo and looking like he’d just stepped out of the Oak Room at the Plaza, I’d been secretly gloating over my own good fortune.

It was only my second five-month contract with the line, but I’d managed to land the part of understudy for both Harold Hill in
The Music Man
and Emile De Becque in
South Pacific
, the plays we were staging during the ten-day cruise to Cozumel and the Panama Canal.

Look, I’m not going to lie to you. I mean, Nina, the artistic director (a five-foot, two-inch two-hundred-pound blond bitch with eyebrow piercings, whose voice was so shrill and edged with nastiness that her real calling should have been serving papers on
Operation Repo
) made it very clear that if the guy playing the lead felt up to it, he’d do both shows both nights we were bringing Broadway to the Caribbean Sea. And yeah, the theatricals were abbreviated versions of the original shows and strictly amateur—about what you’d see in some crummy summer stock production in Akron or St. Petersburg—but there was a certain frisson in the behind-the-scenes action.

First, I had that little confidence boost. Christ, most cabin boys, when they’re done swabbing the “stateroom” toilets and making up the beds and counting how many cans and bottles are missing from the mini bar, were either standing on a line to use the “crew” computer to e-mail Mama or borrowing the gift shop calculator to tote up the exchange rate on a ten-dollar tip—which usually converts to around 1200 hundred Sri Lankan rupees, give or take. They save their entire salaries to marry whatever girl their parents “purchased” for them before they—or even the girl—was born. And the tips paid their family’s rent and buy some decent food back home, plus extras like school books for their eight younger siblings.

But, in my off time I was rehearsing, and if even if I never got into costume or onstage, hell, I was having a lot of fun fucking some of the hotter chorus members while we grappled behind the heavy velvet drapery, picnicked ashore in secluded parks or on nude beaches, and committed travesties and sacrilege inside temples at ancient ruins. It was all in good fun and nobody was looking to get attached or put the strings on anybody else. But there were plenty of us boys who had wild sex standing chest deep in the warm gorgeous turquoise surf at Tulum and, except for the ants, literal steam bath trysts on the jungle trails in Costa Rica while the shipboard straights shopped for bargain jewelry.

But, like I said, all that changed when I watched Ferradini.

We actually met later that night after his show.

Passengers liked to party down on cruises. There’s an afternoon drink fest almost every day and, if you weren’t one of the hired help, you could probably get into hearing
Margaritaville
six out of the ten days at sea while a band played poolside and you jumped in the hot tub, or watched one of the chefs carve an ice swan, or entered a raffle to win a “makeover” in the spa. It
didn’t matter. The ships were seriously into providing anything that made the paying customers feel more alive than they did working their asses off all day long in corporation-land, then fighting traffic just to stop at Costco to pick up toilet paper, three gallons of milk, green leaf salad and frozen pizza in order to go home, scarf a lousy dinner and supervise the kids’ homework.

Most evenings after the swell-elegant meals, the art auctions, hit movies and live shows, the “entertainment” crew went into the dance bars around midnight to get people—those who weren’t losing their shirts in the casino or snuggling in the cozy-couples lounges—up on the floor to shimmy and jive. Choosing which “club” is one of the few perks we were allowed. They even threw us a couple of bucks to buy a drink or two for “likely types” that would keep swilling, then signed off for a lot more high-end booze on their own cruise cards—but we had to circulate and keep it casual because “fraternizing” with the guests was off-limits.

I usually picked Neptune because they played rock and the patrons were allowed to smoke. So, instead of having to haul around some grandma wearing a powder blue sequined gown left over from the last wedding she crashed, I had a little more fun with the younger crowd.

Just being in party clothes beat the hell out of wearing the ugly tan polyester cabin-boy uniform.

The cruise line didn’t give a shit that we were gay — hell, three-quarters of the entertainers were twinks—but we had to act straight in public.

And it wasn’t too bad twirling some of the better-looking chicks because there were plenty of opportunities for surreptitious flirting with the brushed and bronzed male hotties. You’d be bumping some fashionista’s bony hips and flash your eyes at Tomas or Phillipo or Giorgio and without even checking your watch you’d know that within an hour you’d be
wrapped around each other watching the sea-green wake in the stern, exchanging kisses that passed just fine for romance. Then your cocks would be doing the willy-wag against one another till you both felt like lobsters screaming plunged into a boiling pot and dropped trou. Thirty minutes after round one, you’d be in his cot plunging your cock up his tight, tanned ass.

Anyhow, this particular night, the second of the cruise, I was in the Neptune dancing “with” two girls whom I guessed probably came from Kentucky—they weren’t exactly light on their feet, if you know what I mean—when I saw Ferradini standing at the bar.

You couldn’t really miss him. He had to be at least six-foot-four and he was still wearing his drop-dead tuxedo while he sipped smoky cognac from a snifter. He had what I considered the perfect body: lean, but athletic. There was plenty of muscle tone evident in his chest, shoulders, and thighs, but without the ugly pumped look that comes from steroids or obsessive gym training. He was built, but like the mind-blowing persona he displayed on stage, he conveyed that what he was, what he achieved, was both incredible and effortless.

I caught him giving me the once-over, then quickly looking away; his casual studied glance turned me on even more.

I thought he was still watching me. I hoped he was watching. I shimmied harder, aware that my armpits were beading sweat, my cock swelling to epic girth. Shit, I could have been out there doing the Bristol Stomp with my Aunt Gertrude’s corpse, but for Ferradini’s sake I made sure my tight little rump with its mysterious hint of crevasse was going to have the appeal of coming home in time for Christmas after doing two fucking years in Baghdad. In the brig.

The band, thank God, segued to a slow song: one of the standards,
Stairway to Heaven
, I think. I took out a white cotton handkerchief and, eyes cast downward, wiped my forehead. Then I headed for the end of the long curved mahogany bar.

I looked around for him in a fevered agony. Under flickering blue lights, the straights clung to one another like shipwreck victims cast into an icy sea. Phillipo and Giorgio and Tomas had hooked up with the better-looking crew members and were already fleeing the Neptune.

I knew I could screw Cosmin, who hailed from Bucharest—after ten months at sea, I knew he’d be in his bunk swigging a sweet white grasa wine and either grazing
Playguy
or salivating while he checked out some site like GloryHole on his laptop—even if his tube-like uncircumcised prick kind of turned me off. When he sucked me, I didn’t think about it. When it was my turn, even before I mouthed him, and my right hand was pumping fast (so I could get to the part I enjoyed when he shoved his latex-swathed joint up my ass), I couldn’t really look at his whanger. I thought it was ugly. Maybe I was more American than I realized. Maybe my community college education really was crapola.

But I adore the mushroom god, the delicate carved lines and jutting texture of the ridge, the way my hands and tongue can climb and slip over a great cock’s terrain—Christ, I hate smegma, I thought. Let somebody else sniff and slurp or spit out his dick cheese.

I decided I’d drink a tribute to the ultra-elegant Ferradini. I waved a twenty and ordered a pricey cognac.

No sooner had the barkeep slammed it in front of me—not caring if half the drink I was paying for splashed over the sides of the glass—when I felt a hand on my shoulder.

I didn’t even have to turn my head to know it was him. I’d swear on my mother’s grave, I’d memorized every detail of his touch during previous lifetimes. I knew the dulled sheen of the short pinkish fingernails and clean white cuticles intimately. Soul-deep, I craved the heat of his palms, the wetness of his tongue. I wanted to feel his hands and fingers soldered to my naked skin, the hot smear of his lips accented and ovalled with his trim goatee and the thin arch of mustache sliding down my chest. I wanted to watch that amazing sensuous mouth open up into a hollow womb, a pulsing red nest that cradled my balls.

We were in his suite—a world away from the dreary Seabee bunks and dormitory atmosphere I was used to. I felt his lips brush my hair. “You’re good, Marc,” he said.