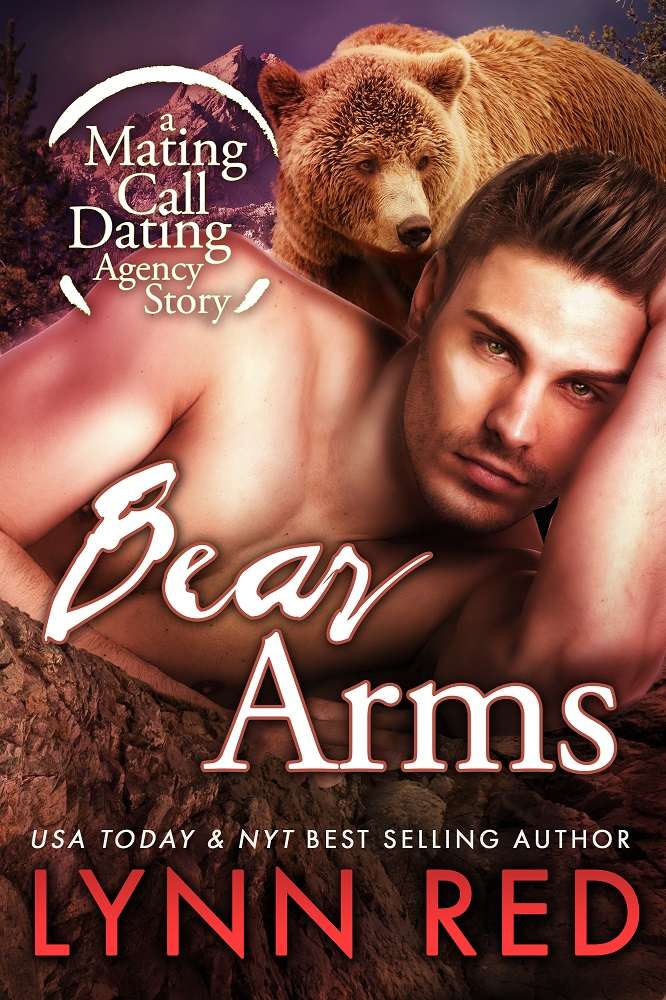 Thank you so much for taking the time to check out my new book! Click here to subscribe to my mailing list to keep up to date on all my new releases, giveaways, and free books!

The Fox and her Bear

Two Bears are Better Than One

Between a Bear and a Hard Place

Special Previews and Excerpts | Keep reading for a bunch of great excerpts from more steamy, sexy, hilarious Lynn Red romances! | The Fox and Her Bear

Two Bears are Better than One

C
hopper blades thumped overhead. The rhythmic throbbing pulsed through Blake Rogan’s chest as he massaged his temples, a thumb stuck in each one. He had just rolled his eyes back in his head and allowed himself to lean against the cold, metal wall for a rest when a sudden noise snapped him back to reality.

“What you gonna do when you get home, Rogan?”

It was Sergeant Morales, one of the first people Blake met when he deployed, and one of the only ones he still trusted. It had been a long four years in the desert, even longer because for a bear, a desert is absolutely no place at all to be.

“Sleep buck naked in the woods for a week. Just to be cold and wet, just to remind myself things aside from heat, sand, and wind exist. You?”

Morales laughed. He got it, he was a bear too – which probably had something to do with the two of them getting on so well. A pair of bears in a platoon made up mostly of wolves. If putting up with that doesn’t test your patience, nothing will.

“Oh, I think I’m going to just go to a Mexican place and make myself sick as shit on Dos Equis and chile rellenos. I like the ones with the really soft, pillowy dough. It’s like a doughnut, but made out of a chili pepper, with that oozy white cheese inside. Want to go with me? Where you going anyway? Back to the Creek?”

They’d talked about White Creek a lot while they were overseas. Home to both of them, but only Morales had stayed behind. Blake went off to school in New York, which was about as good a fit for a bear as was the mountainous desert. Meaning – not at all. The giant buildings gave him anxiety, and the man-made, manicured parks were little more than almost comical distractions from reality.

He hated it. Hated every second of it. Then again, he’d come out of NYU with a philosophy degree and not a whole lot to do with himself. Good thing he’d seen that commercial.

“So where
is
there a lot for you? I’m guessing you aren’t exactly flush with options, professor.”

Blake twisted his lip in a silent growl. That was the one thing his CO figured out that had really gotten to him – the whole professor gag – although saying that, he still thought it was kinda funny.

“Maybe I’ll use that little joke of yours. Maybe I’ll go to Harvard and get me a doctorate and a tweed blazer? Start smoking a pipe and lecturing teenagers on Heidegger and Schopenhauer?”

Blake laughed. “Well,” he said as he lay his head back on the metal, “I guess they are in a way. Old, dead, German philosophers are pretty much like women for me to chase. Except, you know, dead, German and male.”

As he stood up to crack his back and twist around, Morales patted his compadre on the shoulder. “You know, Rogan, sometimes I think you’re crazier than I am. And that’s
real
crazy.”

The chopper’s blades roared louder as the big, metal vulture heaved itself up and over a nearby mountain range. Blake Rogan watched as the desert disappeared into a field of green. Soon they’d be in friendly territory, and shortly after that they’d be at an airport and someone would ask where he wanted to get a ticket to fly. He could cash it in for a one-way to wherever the hell he wanted to go.

“White Creek,” he said softly, almost under his breath, as the greenery underneath scrolled by like the opening crawl of
The Shining
. “Is that even remotely a good idea?”

“You talking to yourself or to me?” Morales stood near the small window, but still near enough to hear. Bear ears helped with that, too. “As long as I’ve known you, neither would surprise me.”

“I was just thinking,” Blake said slowly. “I don’t know. I mean, I could go to the Creek. There’s just nothing for me there. Or at least, nothing I can imagine finding. Not exactly like there’s some huge booming economy for me to make my fortune as a mechanic.”

“Thing is,” Blake acted like he hadn’t heard the compliments, though he had. “I don’t know what the hell there even is to
do
there. I mean, not like I need a party every night, but what if I was wanting to meet someone and—”

“You’ll stay at my place.” Morales looked over at the other bear, who seemed both confused and slightly irritated. “Don’t say anything about it. I know you had trouble with your dad, I know all that. I got a three bedroom place and no one to share it with.” For a second, he watched Blake’s face. “What? All the nights you and the others went out drinking, what did I do? Nothing, that’s right. And let me tell you, doing nothing for the majority of two four-year deployments means you save up enough money to do a whole lot of things – one of which was buy a house with cash.”

I
t was two weeks since touch down, and ‘weird’ didn’t start to describe life back in the Creek. It wasn’t that Blake minded living with Morales at all. Hell, they’d lived together for most of the bear’s adult life. Not living with him would have been stranger.

More like, being home after a long time away – including a long time away that he voluntarily took to get the hell out of the place – had him feeling like an alien in a familiar land. Morales was in and out, always going to visit people or see about this new building or that—they were planning to set up a garage as soon as they found a good place—so Blake had a lot of time to himself. Usually he liked that. Liked to read and listen to music alone, usually with the lights down low enough that he wasn’t ever chancing a headache.

But something was different. Being alone wasn’t giving him the same solace it used to give him. As he sat there, late on that Wednesday night, listening to Terry Gross interviewing some director he’d never heard of for the second time that day, Blake realized what was wrong, and he didn’t like it one bit.

“I’m lonely,” he announced to his part of the three bedroom house his friend had kindly let him occupy. “Oh my God am I ever lonely.” But the only thing worse than that revelation was when he figured out that he didn’t have the first damned clue what to do about it.

Blake was still ruminating, as he called it, or ‘pining’ as anyone else on earth would say, when Morales finally rolled in about half-past one. He smelled a little like beer and looked a lot like drunk, but after all, this was a three-hundred pound bear, so the effects of alcohol are slightly different than they are on a normal human being.

“You know who I miss?” Morales asked as he tossed a very large, very heavy sandwich rolled up in a Jimmy John’s wrapper, to Blake. “Jane Pauley. Remember her?”

“Like the newscaster from the 90s? Sure, I guess.” Blake was trying so hard not to laugh that his face developed a slight twitch on the left cheek. “But, uh... why?”

“My friend,” Morales said with the sort of incredible gravitas that only a drunk can manage, “I have no idea. I’ll tell you this much though, I met this chick tonight—and I’m not being sexist, she’s an owl, so I guess that’s okay to say, right? Anyway, I met her at Tenner’s, you know, that piano place down the road? Anyway, she told me that she’s some kind of match maker. If you’re needing some help finding a girlfriend, she said she can help.”

“Whoa, whoa, you told some woman you just met about me being too pitiful to find a date?” Blake asked. He did his best to sound offended, but truth be told, he wasn’t exactly Don Juan. Still, he had his pride to consider. “Shouldn’t you be worried about yourself first? I mean... you’re pushing forty, after all.”

“And you’re pushing thirty-five so I don’t know why you’re being all high and mighty. Anyway, I told you, I
did
meet someone. I met the chick who makes the dates.”

“Wait,” Blake said, “you met a matchmaker? And now you’re match making
me
?”

Morales went silent for a moment, a look of intense concentration on his face. Blake thought that if the room were better lit, he could probably see his friend’s eyes crossing a little. “Yeah,” Morales finally said. “That’s about the long and short of it, I guess. Also I’m dating the date making chick. She’s an owl, remember.”

Of course, while he was rattling on about things that made no sense to more sober minds, Blake’s brain was churning onward.
If I really do need someone, that’s probably the only way I’m ever going to manage
, he thought.
Guy gone for almost ten years, comes back and works in a garage on the edge of town? Not exactly the most conducive thing I can think of for finding someone
.
Sure it’s a small town and all, but... who knows?

“Snits and flap?” Morales asked. “I don’t know why not, I mean it makes as much sense as saying the long and short of something. I mean something can’t be long and short at the same time, can it?”

“What about a short story that’s so long it gets boring?” Blake asked. “Wouldn’t that count?”

Morales opened his eyes so wide Blake thought they might split open. “Holy shit,” he said. “That’s... how’d you know that? I mean that’s not a paradox or is it? I mean, this girl I met – Eve – I’m sure she could get you a date, but only if you can make sure you didn’t just split open the space-time continuum.”

“Nope,” Blake feigned a look at a watch on his wrist which didn’t exist. “Quarter to two. It was half past when you walked in, so we didn’t cause any splits in sanity or anything.”

“Thank God,” Morales breathed, as serious as you please. “I was pretty worried about that. Good to know we didn’t start the end of the world.”

It was Blake’s turn for comical overacting. “Yeah, I know what you mean. But I think we’re safe. I think the only real danger for now is that the world might actually explode if I end up with a date I don’t have to pay for.” When Morales didn’t respond, Blake told him he was joking. When he
still
didn’t respond, Blake went over to his friend, checked that he was still breathing, and found him actually asleep on his feet.

After helping the big, stunned bear to his own bed, Blake sat back on his, staring at the ceiling.

“Is this really what I want to do?” he asked himself. “I mean, what if it doesn’t work out? What if I just end up wasting my time, and whoever else’s I end up dating?”

“Go to bed!” Morales roared, and then laughed. “Whatever happens, at least you won’t be moping around here!”