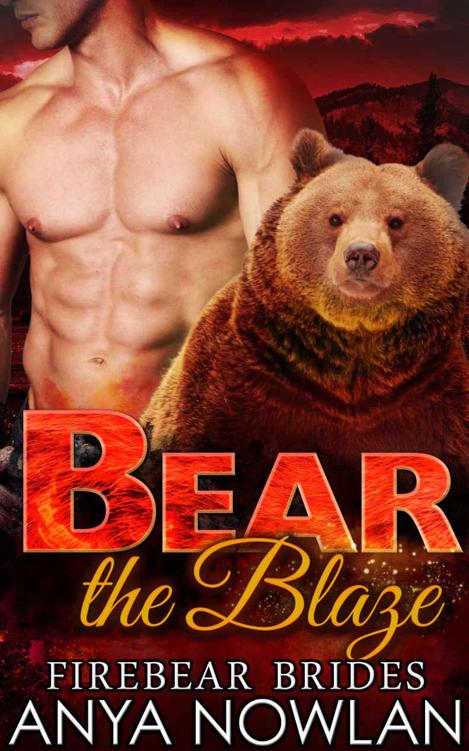 She wasn’t sure which one of them initiated it, but the next thing she knew, she was in his lap, straddling his hips with both hands on his chin, pulling him to her in case he had any intention of leaving.

“Calm down, beautiful,” Ragnar said with a sultry chuckle, his hands resting on her voluptuous ass.

His words sounded more forced than anything else. The hardness that she felt against her told her that she wasn’t overthinking this—Ragnar wanted the moment as much as she did.

“Why?” she asked, not letting him cool her down without a good reason. Nipping at his lower lip with her teeth, she drew a low growl from him. His fingers flexing and squeezing her ass made her giggle and grind against him harder. ”What, firebear? Is this too much for you?” she teased, her green eyes shining with mischief.

Ragnar hissed a growl and stood up, bracing her with one hand on her ass. She yelped, wrapping her legs around his narrow waist as he spun them around and slammed her back against the wooden wall of the shed.

“Oh, I thought I was dealing with a good girl here,” he said, his tone so dangerous and dark that it made Abigail forget to breathe for a second as she stared at him wide-eyed. “But I don’t mind being wrong every once in a while.”

He blew her mind and he didn’t even know it.

“Unless there’s a dragon with a twisted sense of humor running around, then yes, I do think we’re dealing with an arsonist,” Ragnar said, standing up to his full height and rolling his shoulders back.

His neck cracked as he moved it side to side, trying to work the kinks out of it. It had been a long few days and standing in the forest near Rake Whiteplains’ ranch, he was feeling a rather annoying sense of déjà vu.

“Well, I figured as much,” Redmond noted thoughtfully, taking a seat on one of the tree stumps that had once been a tall, majestic birch tree not too long ago.

It was one of the many that Battle and Warren had ended up cutting down, as it was too damaged by the fire to survive. They’d cleared several acres of once-healthy woodlands and Ragnar was certain that he wasn’t the only one enraged by all of this. It was in a shifter’s nature to want to preserve the land around them.

Woods were rare enough these days and logging was a constant nuisance unless done carefully, so any additional harm to the lands the shapeshifters liked to think of as their own was an immediate and painful cause for outrage within a community. Especially one like Shifter Grove, which prided itself on being as eco-friendly as possible for a sprawling settlement.

The ground crackled under Ragnar’s heavy work boots as he trailed away from the perceived point of origin, considering the burn patterns. Someone had obviously used accelerant to set this fire, carrying it in a loose crescent shape outward from a single point and then spiraling back in. It wasn’t done haphazardly; someone had taken joy in killing these trees and setting the lives and livelihood of people at risk.

“So, what do we do next, brother dearest?” Redmond asked with a wry smirk.

Ragnar stopped, looking up. He crinkled his nose slightly, as if something stunk right in front of him. And it did, sort of. The whole situation had a foul odor to it, one that made his blood boil. Usually a reasonable, calm man, he found himself pissed off beyond belief that someone would go so far as to harm the lands of his ancestors like this.

“We find out who the fucker is who’s doing it,” he said simply, garnering a nod from his older brother.

“That sounds like a plan. You mind if we do it after dinner? I’m pretty sure Tiana’s going to serve us on a plate tomorrow if we’re late again,” Redmond chuckled, standing up.

“Might as well,” Ragnar agreed, fishing out a notebook and marking down some notes for himself.

There couldn’t have been a lot of places that would sell accelerant around Idaho. He’d know more when he got the samples back from the lab in his current home state of Arizona, but there were ways for him to continue on with his work without waiting for a definitive answer. Walking as he wrote, he trailed behind Redmond, taking deep breaths and letting the scent permeate within him.

There was always a distinct kind of odor to every accident scene. Having worked as a fire investigator for the past few years, he’d come to notice the uniqueness of each location. It was like a fingerprint, something that was completely different at every scene. And like a fingerprint, studying one could give hints about other accidents, tying them together to one singular source.

There was no doubt in Ragnar’s mind that there was foul play involved. Someone was taking things a step too far. It wasn’t because the woods were dry due to the extended drought or some kid somewhere had gotten a pack of matches and gone to town. No, this was more serious than that.

His dark thoughts continued as they reached the utility truck Redmond had bought after his last one had gotten trashed. It was fittingly red and was waiting for the new Shifter Grove Fire Department logo to be plastered on its hood and doors, which Rake’s wife was working on. Ragnar shook his head, chuckling slightly as he climbed into the tall Ford truck.

“What’s so damn funny, bro?” Redmond asked, turning the vehicle around and setting a course for Hamilton House. “I thought laughing wasn’t in your job description,” he taunted.

“Yeah? Well, you keep that attitude up and I’ll see about maybe reprogramming your mannerisms,” Ragnar scoffed, joshing with his brother.

The Hamilton brothers hadn’t seen each other in far too long. After the death of their mother when they were teens, each and every one of them had picked a different end of the country and disappeared to fight their own demons. Royce had stayed in Boston, where they’d mostly grown up, while Redmond had chosen Los Angeles. After a series of misadventures, many of which may or may not have included women, Ragnar ended up in Phoenix. Nobody really knew where Rhodes was hiding out these days.

Despite the lack of communication between them, Ragnar had to admit that it felt good being with family. Hamilton House had struck him like a mallet to the gut, bringing memories flooding back he didn’t even know he held, seeing as how he’d been just a brat when their family had packed up and left.

He could still remember playing outside with his brothers while their father or uncle kept an eye on them every day. And then suddenly one day, the car was being packed up and their mother was shoving them into the seats, crying, with no Dad in sight.

Exhaling deeply, he shoved the notes into a pocket of his jacket and let the dark thoughts drift away from him. Work had to stay in its designated place and not sneak into his private life. That was how Ragnar Hamilton liked to keep it—everything had its place. Work during working hours, play during playing hours. Neat and tidy. Though he was already going out on a limb by being in Idaho at all, a fact that weighed far too heavily on his mind.

“I’m glad you decided to come,” Redmond said, brushing off the joking threat from before. “We can do a lot of things between me and Royce, but playing detective is not my forte.”

“I figured you two knuckleheads needed my help,” Ragnar agreed, getting a chortle in reply from Redmond. “But I’m glad I came too. I wanted to see the old house before it got sold off.”

Redmond cocked a brow, looking over at Ragnar. “Sold off? We’re not selling it off. Hell, even if we wanted to, we couldn’t. Herbert’s will is ironclad about this. Trust me, I was the first one at the lawyer’s office, asking whether this bullshit was true.”

Ragnar frowned. Herbert Hamilton had been, for all intents and purposes, a crazy old man. After the Hamilton clan had mostly fallen apart after the death of Ragnar’s and Redmond’s father Holden, their uncle had soon been left as the sole Hamilton bear in the area. What had once been one of the strongest werebear clans in the region, and certainly one of the most respected ones, had been whittled down to a withered old man who had no one to share his legacy with.

Herbert’s story was grim even by the best of accounts. It was no wonder that the rules he’d set in order to inherit Hamilton House and its grounds were so damned off-the-wall. The will clearly stated that every one of Holden’s sons would have to come back to the area, get married within a year, and two of them would have to either already have cubs by then or be well on their way.

It was entirely insane, and sounded very much like something Uncle Herbert would do.

“Yeah? Royce told me about that but I held out hope that there was something we could do. It all sounds pretty damn fantastic if you ask me,” he commented, though truthfully he wasn’t that surprised. “But I’ll tell you this much, I’m only here to help you out with the investigation. I’m already taking too many days off from work for this. I can’t stay in Idaho and play house with you crazy bunch for much longer.”

Wisely, Redmond chose to say nothing. The slight redness of his cheeks told Ragnar in no uncertain terms that the second Hamilton firebear had plenty to say, but common sense was keeping his tongue at bay. That was impressive—Redmond had never been very good with self-control.