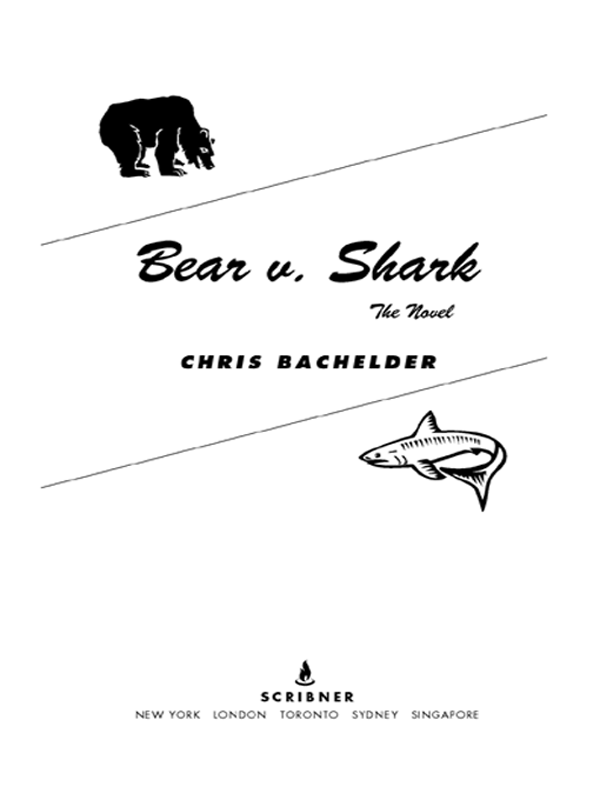 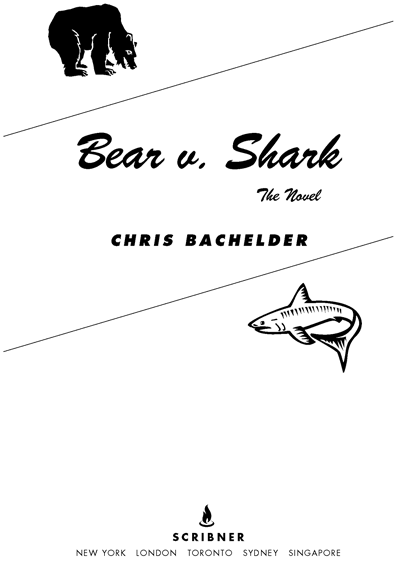 This book is a work of fiction. Names, characters,
places, and incidents either are products of the
author’s imagination or are used fictitiously. Any
resemblance to actual events or locales or persons,
living or dead, is entirely coincidental.

All rights reserved, including the right of
reproduction in whole or in part in any form.

SCRIBNER
and design are trademarks of
Macmillan Library Reference USA, Inc., used under license by
Simon & Schuster, the publisher of this work.

For my mother, Linda Wilson
For my father, Allen Bachelder
and
For my sister, Lisa Bachelder

Hearty thanks to Gillian Blake and Rachel Sussman at Scribner for their expertise and enthusiasm, and to Lisa Bankoff for getting the book in the right hands.

Thanks to extraordinary teachers: Michael Parker, Greg Meyerson, and especially Padgett Powell, who talked big and backed it up.

Many thanks to my talented and generous peers in the UF writing workshop, and in particular to Emily Miller, a remarkable friend.

Deluxe thanks to Rob Seals, an inspiration. A bear hug to Cynthia Nearman, big-hearted comrade.

Thanks to Florrie for her warm hospitality, to Joyce for her kindness and her faith in good things, to Ron for the big idea.

Special thanks to Kate Moulder for all that she gave.

And most of all, thanks to my parents and sister for their love, trust, and support. I shut up and took it all.

Lord Clifford says, “The smallest worm will turn being trodden upon.”

Kurt Vonnegut Jr. says, “This is meant to be optimistic, I think, but I have to tell you that a worm can be stepped on in such a way that it can’t possibly turn after you remove your foot.”

Bear v. Shark: The Novel
is based on a
true story
.

Or, rather: It is
based on
a true story.

Imagine a true story. Imagine this true story in a solid, middle-class neighborhood, modest and truthful. Imagine its joists, its beams, the steady, cautious slope of its shingled roof. Imagine its crisp, righteous corners, those near-perfect 90-degree angles, knowing as you do that a perfect 90-degree angle — like a perfect circle or a perfect butt — doesn’t really exist in the Real World, but knowing that these angles have aspired to perfection, nonetheless (or else what’s a heaven for?). Imagine the clean closets, the sensible floor plan, the utter lack of luxury or flourish. Imagine that the materials are first-rate, chosen and guaranteed by men who care about doing a job right dammit. Imagine that everything checks out, yes the basement is unfinished and dank, but it’s the truth, take it or leave it.

Now, imagine, based atop this monument to forthrightness and plain dealing, imagine a ramshackle unit constructed willy-nilly, catch-as-catch-can, higgledy-piggledy, all pastiched together with hyphens and the thin, colorful threads of ideas, a motley edifice, part bungalow, part high-rise, part rambler, there’s stucco and brick and wood and vinyl siding, not unplanned,
not
unplanned,
charming
or
interesting
being the absolute best way to describe this place if you’re standing on the bushwhacked front lawn of Truth, not unstable in its own right but perched upon, based on, the cautious, steady slope of the shingled roof of Truth and teetering, teetering, the whole damn situation fixing to collapse into tainted wreckage, in which wreckage lie nearly equal parts Truth and Lie, Irony and That Which Is Not Irony, such that context and purity are forever lost, and the pieces are indistinguishable.

How shall I regard that naily 2 by 4? Is it a metaplank, a superplank, a plank self-referential? A complex and ambiguous plank, and all the more so for it’s apparent simplicity, its garish honesty regarding its own dimensions? Has anyone even bothered to measure the 2 by 4? In short: Is this a postmodern stick?

Say, are we to look
through
or
at
that cracked window?

Linoleum: Authenticity or the death of authenticity?

So it’s kind of like a parlor game, then? In essence?

Well, you know, it’s like where you play it.

How big a TV you put in there?

The Television, the couch, the main character (Mr. Norman) asleep, twitching in the strobe glow.

The Television says don’t you go away, we’ll be right back.

Mr. Norman is all twitch and mutter. He doesn’t go away.

There’s American-style shag carpet and there’s wood paneling wallpaper, I couldn’t tell the difference, you fooled me, where’s the seam?

And then from dreams grainy and edge-blurry, cold-sizzling with synaptic crack and static, Mr. Norman opens his eyes into the titillating snow-white throb of a cordless vibrating pillow, the Vibra-Dream Plus, not available in stores, order today.

This blindingly white pillow, for which operators are standing by, cradles Mr. Norman’s face and curves seductively, ergonomically, up to his ears, into which it purrs and coos like a lover.

She says, “For a limited time only, void where prohibited, ergonomically designed.”

She says, “Check the cordless pillow aisle at your local grocer.”

On Television it’s the same thing.

Ergonomically: from the Latin
ergo
(therefore) and the French
nom
(name).

She (the pillow) doesn’t care whether Mr. Norman used Visa or MasterCard, or whether he ordered by toll-free number or via the Internet or even through the painfully and deliciously slow U.S. Postal Service. She (the pillow) just wants Mr. Norman to rest easy after a long day at the office. She understands. She cares. She grazes his earlobes when she speaks.

With her thrumming tongue, her tingling lips, the pillow-lover says, “Therefore name.” It makes sense.

Mr. Norman’s neck hurts, but she (the revolutionary pillow of tomorrow) says, “You be still, big boy.”

Mr. Norman, penis erect and warranty expired, remains facedown on the couch in the big Television room of his suburban home, his eyes squinting into a whiteout of sexy sleep technology, a hot blizzard of affordable comfort and Yankee can-do know-how.

In a manner of speaking: Mr. Norman wakes up.

A wife (Mrs. Norman) and two boys all asleep upstairs.

We got ourselves a quiet house. This suburban house is completely and blessedly silent.

The house is completely silent, except only for those trifling noises against which we recognize and understand the very idea of silence, the rustle and pulse that we might say define silence, yes, bring it into existence and lock it into a paired opposition that confers meaning and context.

Silent but for the synthetic pulse of coaxial cables, converters, underground fiber-optic lines. The crackle and pop of electricity, currency, frequency — the ohms and amperes, watts and volts.

All silent except for the thud of the
Land Swaps & Divorces
against vinyl siding, except for the clicking of the hard drive, the murmuring of Web site authors — Charles Lindbergh deniers, child pornographers, auctioneers, insomniacs, quilters, Captains of Industry, professors of Canadian Literature.

Except for bear banter, shark schlock.

Except for the inexorable grind of continental plates miles below the earth’s surface.

Silent except for the utopian drone of the Vibra-Dream Plus and the sweet, sweet morning songs of electric birds installed in the imitation dogwoods in the backyard of Mr. Norman’s suburban cable-ready home.

You shoot a bear so many times and it still doesn’t die.

The house is completely silent when Mr. Norman awakes.