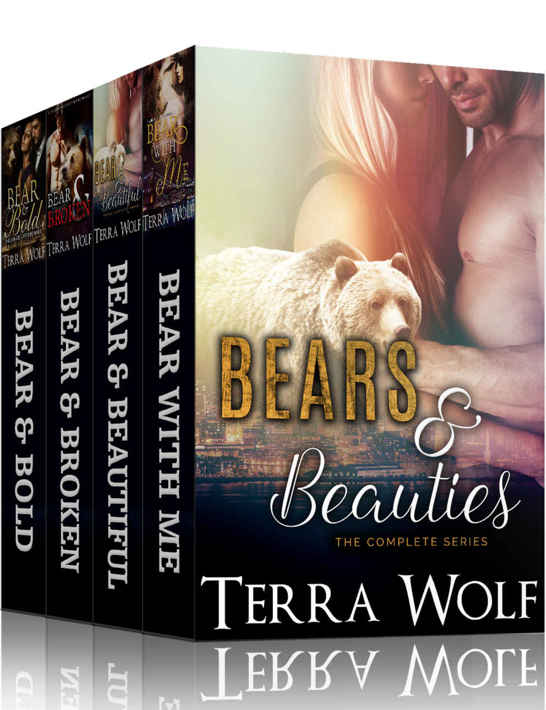 Copyright © 2015 Terra Wolf and Mercy May

No part of this book may be reproduced, uploaded to the Internet, or copied without permission from the author. The author respectfully asks that you please support artistic expression and help promote anti-piracy efforts by purchasing a copy of this book at the authorized online outlets.

This is a work of fiction intended for mature audiences only. Names, characters, places, and incidents either are the product of the author’s imagination or are used fictitiously. Some may be used for parody purposes. Any resemblance to events, locales, business establishments, or actual persons, living or dead, events, or locales is purely coincidental.

Sign up for my newsletter in order to receive updates on releases and promotions by clicking
HERE
.

Find more of my books, available exclusively on Amazon, by clicking
HERE
.

When his world fell apart, everything came together...

Billionaire bear shifter Chase Hammer is on the verge of losing it all. As his company's stocks plummet in a post-recession New York City, Chase's primal side fights to emerge. The more stress the concrete jungle breeds, the more urgent his bear's needs seem. In a last ditch effort to relieve stress, get his head on straight, and steer his company back in the right direction, Chase takes a spontaneous trip to his late parents' stomping grounds in the sanctity of Appalachia.
Curvy and quick-witted Carolina beauty Andrea Sloan lives in the small mountain town of Boone. With long days consisting of hiking trips and exploring along the Blue Ridge Parkway, Andrea has found true contentment in the mountain air. That contentment, however, breeds boredom and a need for adventure beyond what a simple mountain life can provide. So when a stranger from New York, dressed in designer clothes and wielding an air of mystery about him shows up in Boone just in time to rescue her from certain death, she can't help but be intrigued.
Can this fast blossoming love, supported by primal needs they never knew existed, meld two completely different worlds together? Or will forces beyond their control shatter everything they've come to hold dear?

I rested my face in my hands atop the long and dark mahogany table, listening to the chattering of tired and frightened men, my predator’s senses flaring beneath my skin. Everything was falling apart before my eyes - ten years of hard, unending effort slowly slipping down Wall Street’s toilet. And, worst yet, it seemed that no matter how hard I tried, there was nothing I could do to stop it.

“What should we
do,
Chase?” one voice called out to me, indistinguishable from the haggard cries of others in the room.

“We’ve got to form a plan!” called another, doing his best to find hope where there simply wasn’t any.

The recession, experts said, was over, and yet Hammer Industries hadn’t even begun to recover. Something was distinctly wrong, and no matter how hard I tried, I simply could not find or provide the answers that these men so desperately sought. The company that I had built with my own blood, sweat, and tears was grinding to a halt, and if I did nothing, it would fall apart around me.

“Stop,” I said finally, immediately quieting the voices as I looked up from the table.

Five haggard faces, worn and weary from the stress of losing their livelihood, all looked at me in unison. These men were my friends, allies with whom I had built a software empire. They were innovators, brilliant, and wonderful men all, but none of them could solve the current crisis, and they knew it. That’s why I was CEO, why I had been given charge of the company’s direction, and why I was solely responsible for getting us all out of the mess we’d created. Something had to give, and I had to be the one to give it.

I stood from my chair and walked toward the window, the room still silent as I admired the darkening New York City skyline. The conference room faced the east, and I could make out Lady Liberty signaling her welcome to weary souls. The city itself was alive with activity, as it always was, and from the ninety-eighth floor, everyone below looked like mere toys in the midst of a playground for the gods.

I shook my head, doing my best to clear my thoughts, as I caught sight of my reflection in the window. My broad shoulders were held in a less-than-confident manner, slumped downward even in my tailored suit. My hair was a mess, its dark brown curls ruffled by a full day’s worth of pulling and mussing. My deep hazel eyes were haggard and empty, the cold glare of my bear little more than a glimmer. He was there, waiting and biding his time, but growing ever more impatient. The stress of Hammer Industries’ financial crisis had him boiling to an edge, and if I didn’t do something soon, I was afraid he’d run loose, uncontrollable among the stone walls of the concrete jungle.

“Chase?” a voice from behind called, piercing the silence, and I turned to face the group of assembled men.

Collin, the lead software engineer for the company, stared at me absently, his forehead wrinkled in almost agony as he began to speak, “We’re pretty much bleeding out. The costs of development are significantly higher than the profit margin should allow, and we’re a good six to eight months behind.”

I took a breath before responding, doing my best to stave off the rising fury that my internal predator threatened to exhibit. “How did this happen?” I asked as calmly as I could manage.

“Well,” Collin started, adjusting himself in his seat, and poising himself as far away from me as he could without really moving. “There were some layoffs, due to the economic pressure. That, coupled with the significant series of bugs we found during the first phase of development, and you have a recipe for, well, disaster.”

“And
how
does a multi billion dollar company not have the resources to get around this?” I asked a bit more harshly than I intended.

Collin stared at me, doing his best to avoid eye contact, and mumbled, “It’s not a lack of resources. It was poor instructions and architecture…on my part.”

Before I knew what was happening, I stormed across the room toward Collin, grabbed him out of his chair, and drove him against the wall, lifting him so that his eyes were on level with my well-above six feet of height. “You’re the
damned
lead engineer, Collin. What? Were you too busy with your whores or your blow to pay attention to what you were doing?” I dropped him on the floor and watched him spill to the floor, his face planted firmly in his hands.

The rest of the men stared at me, their eyes wide with both shock and horror, and it was all I could do to keep from tearing at them as well.

All my hard work. Years of tedious labor. A decade of gathering resources, funding, and some of the most brilliant mathematical minds in the world. And it was all crumbling because of the errors made by these men. It was all I could do to be in the same room with them without tossing them, one by one, from the ninety-eight floor.

Without so much as a word, I stormed out of the room, my bear doing his best to climb out from under my skin as my fury built.

Reaching my own office, I immediately walked up to my desk and punched a button on the intercom, signaling for my secretary to respond.

After a moment, my secretary’s voice filled the room. “Yes, Mr. Hammer?”

“Sarah,” I said, still trying to still my breathing, “Charter a flight to Boone, North Carolina. Have the chopper ready in fifteen.”

“You’re leaving
now?”
Sarah’s voice beamed over the intercom again, this time filled with both surprise and worry. She knew just as well as anyone that the company was bleeding out, and the thought of the CEO taking an impromptu trip to Appalachia likely didn’t seem like the best possible business move at the time.

“Yes. I’m going out to my parents’ place. It’s urgent,” I told her, offering a half-truth. My parents did, at one time, own a place in Boone. But they’d passed away over a decade ago, just as I had begun laying the groundwork for my company. Since then, their cabin had sat desolate and empty amid the mountains of the Blue Ridge Parkway. I hadn’t had a chance to visit the place since their deaths, but now seemed as good a time as any to get away from the city, let my bear roam for a while, and I could take the time to pack up cabin while I was there.

Hammer Industries would have to wait. If I stayed in the city much longer, the company would have more problems on its hands than just plummeting stocks, they’d have a vicious and hungry predator roaming the halls.

“Thank you, Sarah,” I replied as I gathered a few of my things and exited the office, making my way toward the roof where my helicopter awaited.

It was finally time for some peace and quiet.

My feet were aching as I rounded the stream. Boots too old and too worn from countless hiking and fishing trips crushed inward against my feet, and I dropped to a seat atop a large boulder the moment I came close enough to it. The crisp mountain air of the Blue Ridge Parkway filled my nostrils as I inhaled deeply, and I watched in silence as fish and birds danced in and above the water.

I heaved my backpack off my back and sat it on the boulder beside me, retrieving my water bottle as I did. Taking a large swig of the water, I noticed, for the first time, that my brow was matted with sweat. I’d been hiking for the better part of five hours, and as best as I could tell, the nearest point of civilization was several miles away in any direction. Part of me - the part that loved urbanization and socialization - yearned to return to the small college town. The rest, however, the part that held a deep love for adventure and exploration, urged for me to keep walking. A little further into the woods, and I would be the furthest I’d ever been. A little further, and everything would be new and exciting.

I’d been born and raised in the quiet community of Boone, had grown up amid its hills and streams and splendor, and had even attended Appalachian State University in order to earn a degree in journalism, which I had immediately put to good use by taking a job at the
High Country Press
. I’d never so much as left Watauga County, and for a twenty-five year old Carolina girl with adventure at heart, that’s about as damning as it gets.

Working at a small-town paper doesn’t really afford the necessary finances to extensively travel, especially when a part-time, and often freelance, gig is all I could manage. You don’t exactly need a huge amount of staff writers for a small community like Boone. Though, the lack of a typical nine-to-five did afford me the opportunity to explore the Parkway whenever I wanted.

Longarm on the Overland Trail by Tabor Evans
Rancher Wants a Wife by Kate Bridges
The Dead Caller from Chicago by Jack Fredrickson
Seal Team Seven #20: Attack Mode by Keith Douglass
Hounds Abound by Linda O. Johnston
His Ancient Heart by M. R. Forbes
The Inheritance by Maggie Carpenter
Just Her Type by Jo Ann Ferguson
Edge of the Heat 7 by Ladew, Lisa
Pisces: From Behind That Locked Door by Pepper Espinoza
Our partner