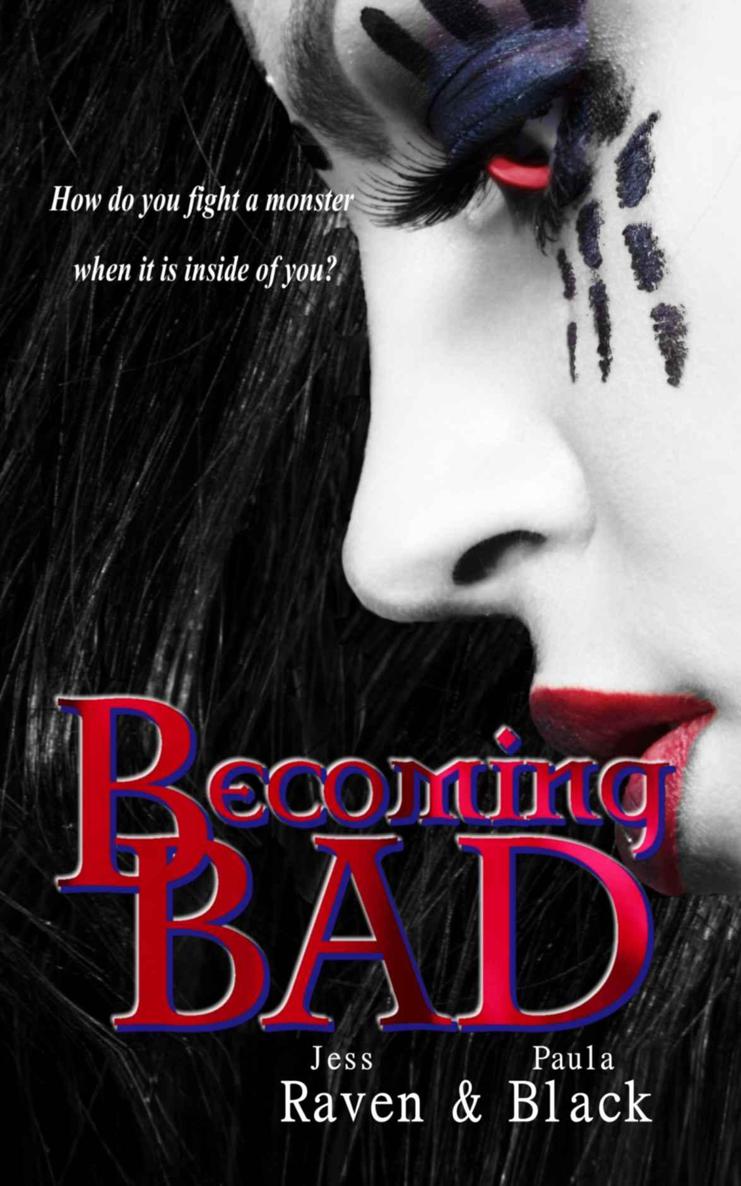 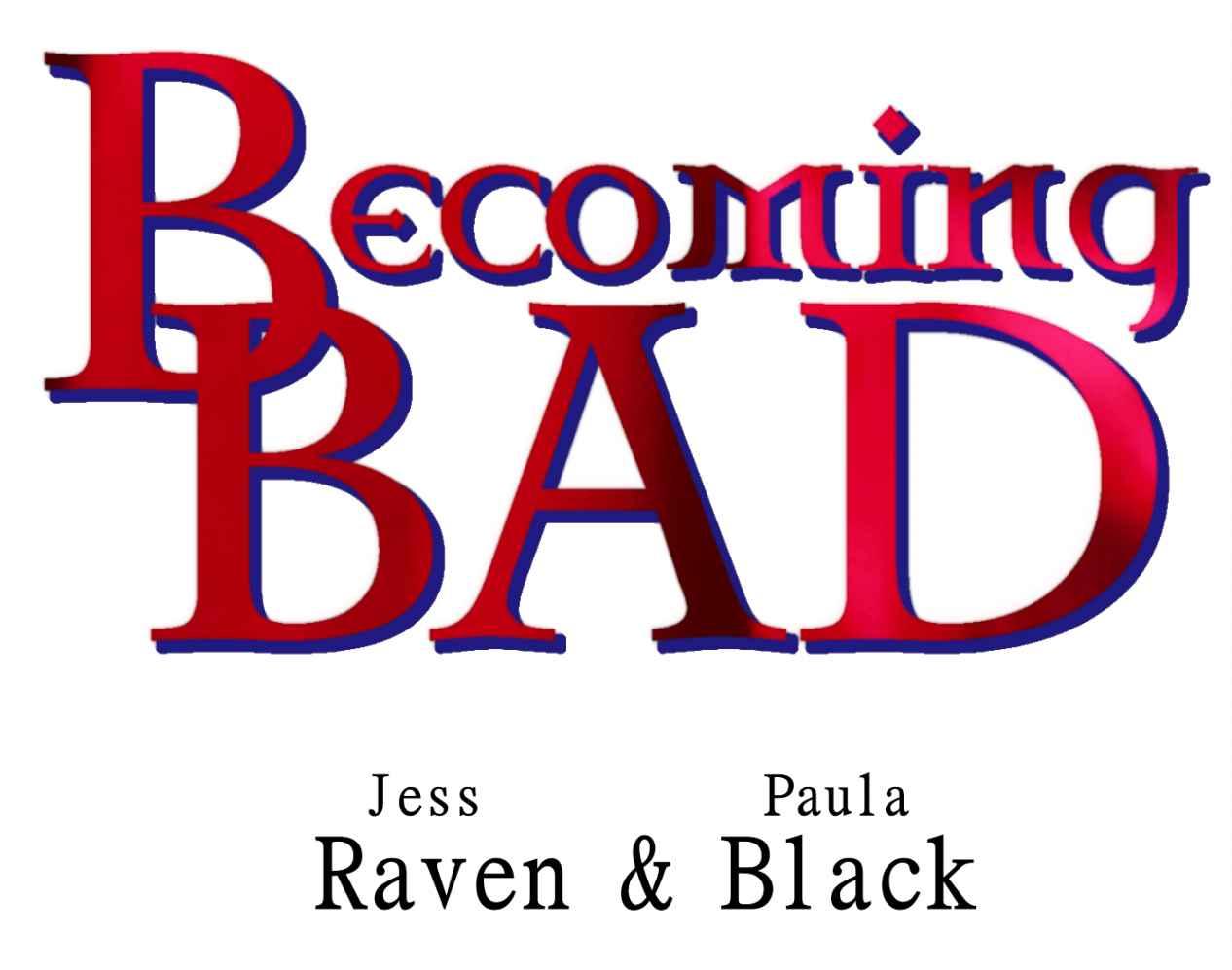 This book or any portion thereof may not be reproduced or used in any manner whatsoever without the express written permission of the authors except for the use of brief quotations in a book review.

Becoming Bad is a work of fiction. Names, characters, places and incidents other than those in the public domain are the products of the authors imaginations or are used fictitiously. Any resemblance to actual events, locales, or persons, living or dead, is entirely coincidental.

“He who fights monsters should look into it that he himself does not behoove a monster. When you gaze long into the Abyss, the Abyss also gazes into you.’
Friedrich Nietzsche
“I sought my soul, but my soul I could not see. I sought my God, but my God eluded me. I sought my brother and I found all three.”
William Blake
Should you find yourself lost in the Becoming world, please remember there is a
GLOSSARY
at the end of the book to help. You can access it from here or from the interactive table of contents.

Ninth Century. Dubhlinn, on the east coast of Ireland.

He was too late …
God, there was nothing left of her
.

Scenting his aggression, the pack paused in their gorging and, as one, cranked their blood-dripping muzzles in Connal’s direction. In the chill of the moonlight, steam rose up from their thick pelts and from what was left of the gored prey at their feet. Aoife’s body was unrecognisable, except for the matted clumps of blonde hair.

A huge beast at the left flank of the pack growled, commanding Connal’s attention. From its jaws hung a rag-doll form, dark curls ruffled by the wind, giving an illusion of life where clearly there was none.

Connal’s gorge rose, hackles bristling as a wall of red slammed down on his vision. His bones began to snap and twist. Hatred was a powerful anaesthetic, rage an adrenaline shot to the heart of his fury. The wolf in him took full possession, blacking out all memory of the carnage that left a bloodied trail of slashed carcasses littering the sands of the arena. No quarter given, one by one, often two and three at a time, Connal hacked them down in a hot slaughter of fangs and claws, until panting and shivering with the overdose of bloodlust coursing through his veins, he slumped, human once more, cradling the cold body of his baby son, grief jagged in his chest.

That was how the Morrígan found him, broken on the ground, keening the loss of a child and a lover and a stolen future.

He didn’t think to question how she got inside the arena. He was aware of black wingspans cutting shadows across the full moon, circling, drawn by the fresh scent of carrion on the sands. Between one sweep of darkness and the next, she stood over him, a vision of alabaster skin and blood-red lips. Midnight hair grazed her lower back, its wild waves contained by a silver headband that met in the centre of her forehead in a pair of raven heads.

‘What evil could do such a thing, to an innocent babe in arms?’ she asked, kneeling to brush slender fingers to his dead son’s skin.

Connal lifted tortured eyes to the face of this woman who spoke, not in the guttural Norse tongue of the Fomorians, but in the old Gaelic lilt of the village where he was raised. She touched the stubble of his blood-spattered jaw. ‘What have they done to you?’

‘Who are you?’ Connal rasped.

‘I am Death. I am Vengeance. I am War.’ Her voice deepened and the earth trembled as the woman rose up, arms spread like dark wings, suspended in the moonlight. A preternatural aura pulsed blue around her silhouette and her hair writhed like a nest of eels. ‘I am Morrígan,’ she said, ‘I have what you seek, if you will bargain for it.’

Morrígan? Every boy knew the name of the Phantom Queen, a fireside myth for ale-soaked storytellers. Devious, powerful and bloodthirsty, the heroes of legend bargained with the witch at their peril. But this was no legend, and Connal was a slave, not a hero. Goddesses didn’t just materialise in your darkest moment of grief. Nobody actually believed in the existence of the Ancients. The Morrígan was nothing more than the near-death hallucination of warriors on the battlefield.

‘You come to mock me, woman? Now? Be mindful of my state. I have never killed a female, but I will not rule you out as my first.’ He showed his wolf, baring fangs, eyes flashing red, but his heart was not in killing the bitch. He’d slaked his thirst on the untame, and now the focus of his retribution was on only one man.

‘Is that the best you can muster, warrior?’ She swept her arms in an arc that seemed to pull the shadows into an inky plumage of wings. They beat the air, whipping a chill wind around his body. The blue aura intensified, engulfing her, bending the air, refracting threads of light into fur and form … demonic, beastly and terrifyingly beautiful … The creature lunged at him, snapping its jaws. The force of its growl knocked Connal flat onto his back. He was choking, pinned and drowning in the onslaught of power. As abruptly as it had begun, the force retreated. She was woman once more, looming above him where he lay sprawled, still clutching his dead son.

‘What is this magic, Witch?’ he growled, fighting to fill his lungs as he hauled himself upright.

‘You insult me, Wolf-boy. I am no common sorceress. There is no witchcraft here, only power beyond your wildest imaginings.’ She disappeared, gone in the blink of an eye, only to reappear at his back, breathing down his neck. ‘I can give you what your heart desires most, Warrior.’

‘Can you raise the dead?’ he asked bitterly. With a tenderness that belied his fighter’s hand, he smoothed the dark curls of his lifeless son. There was hardly a mark on the boy. Some blunt trauma, perhaps, had taken him. He could be sleeping, but for the chill invading his little body. Connal folded him tighter into his arms, as though he could cheat death with just the heat of his own despair.

‘On a night such as this, a Blód-Samhain, the veil between the realms of the living and the dead is but a mist. All things are possible.’ She purred, dancing fingertips across the breadth of his shoulders. ‘You choose to bargain with the Morrígan?'

‘What is your price?’ He craned his neck, seeking her eyes, but found only fleeting shadows.

‘Only a lifetime in my service,’ she murmured, her nails tracing patterns in his biceps. ’I have need of an executioner, a guarddog, you might say. It is a calling to which your talents are especially suited.’

‘I am already enslaved. I already kill. The master’s name matters not.’

The corners of the Morrígan‘s blood-red mouth curled into a wicked smile. ‘I have no doubt of your ability to perform, Warrior. Indeed, I anticipate seeing you in action.’ She had an unnatural way of moving, coiling herself about his body like a serpent, folding herself around him with a caress of wings. ‘Do we have a bargain, Warrior?’

‘Why are you doing this to me?’ He shoved her away with a growl. ‘If you can do as you say, and bring them back to life, then yes, Witch, we have a bargain.’

‘Excellent.’ Her smile was chilling, sunlight on a glacier. ‘I require a physical binding, something of your lover’s, something of value.’ Her hand beckoned, an impatient flick commanding he give her something.

Connal had nothing of Aoife’s. Unless … He strode across the earth to where the money had scattered from his hands, and bent to retrieve a single coin from the sand. It was Roman, spoils of the raids. ‘Will this do?’

The silver flickered, magic in the moonlight, payment for the dead, though it seemed not valuable enough to buy a life. ‘Yes, this will do.’ She turned the coin over, regarding the image embossed on its surface. ‘Aha, the she-wolf suckling her twin boys! This will do perfectly.’ Her smile was ironic. ‘Something of the child too, I think … perhaps ...’ A blade materialised in her hand, and before he could object, she was shearing a bundle of curls from the babe’s head, taking fragments of a young life that made his heart lurch. The Morrígan stroked his son’s hair through her fingers, braiding it into a single length, satin yet sturdy as hide.

‘To remind you why you serve me,’ she said, stepping closer to fasten the collar about Connal’s neck. ‘There,’ she purred, stroking the coin at the hollow of his throat and pressing her lips to the his jaw in a cold kiss. ‘You are mine, Warrior.’

Her hands shot out, and he flinched, but the strike was aimed skyward. She wove light through the air, writing glyphs that crackled and spit sparks, piercing the gathering clouds and churning them into a grey turbulence. Thunder rolled as she signed the last glyph, unleashing an earth-shaking growl from the heavens that rocked his balance. She was unaffected, eyes closed, head thrown back, a sight to behold, pulling lightning from the clouds like threads from a blanket. Her voice was layered, guttural and sweet, an animal and a maiden in eerie unity, trembling the foundations of the world with their song. An arm reached up, fingers spread … and the sky exploded in dazzling light. Lightning crashed to the ground, splitting dirt and reaching in with luminous fingers to widen the cracks. Again and again they struck, digging the ground to sizzling chasms.

Sacrifice of the Septimus: Part 2 (Afterlife saga Book 7) by Stephanie Hudson
Life Without You by Liesel Schmidt
The Man Of One Million Years by Chilvers, Edward
Dark Torment by Karen Robards
Just a Summer Fling by Cate Cameron
Bright Eyes by Catherine Anderson
SpeakeasySweetheart by Clare Murray
Nancy Kress by Nothing Human
Heat Wave by Eileen Spinelli
Invincible by Haslett, Dewayne
Our partner