Read Before the Fall Online 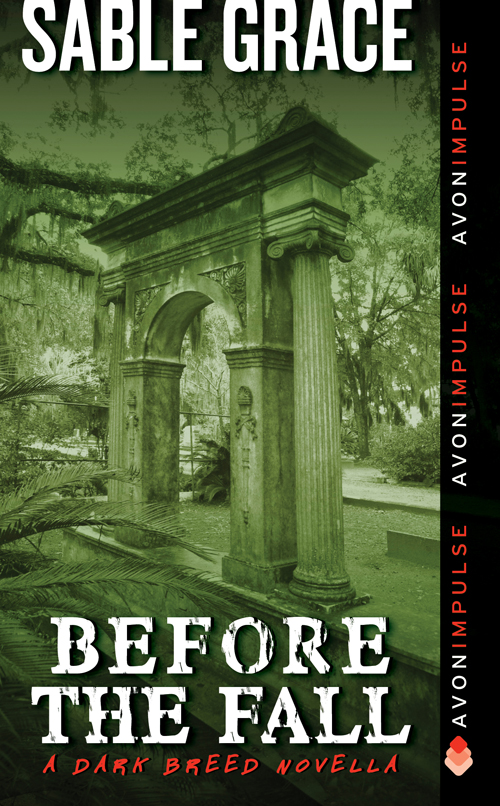 B
EFORE THE
F
ALL

T
here wasn't a single bottle of whiskey that Zach Merchant hadn't fallen in love with in the past six months. Tonight, as he headed out to hit his favorite haunt, Tattoos, his bedfellow of choice would be a soft, golden color that would coat his mouth with pure sexiness and would cloud his thoughts enough to give him his evening's dose of peace.

He could have just poured himself a shot or two here, but sitting at home with his whiskey felt pathetic, even to him. Not that the women of Tattoos weren't a draw unto themselves. They were. Or at least they used to be. These days, however, he found himself more turned on by the prospect of a finely-shaped bottle than a finely-shaped body.

So he'd head to Tattoos, let the women rub their bodies against him, and smile as though they'd made his night, when in truth not one of them could hold a candle to the woman he was trying to lose in the bottom of a shot glassâa certain brown-haired, doe-eyed woman who still owned more of Zach's thoughts than he cared to admit.

It's been six months, Merchant. Shanna's not coming back.

As he locked his door and headed down the small walkway in front of his cottage, that thought made his head pound as he mentally kicked his own ass for being such a lovesick pussy.

When he reached the sidewalk, the faint whimper of his neighbor's dog broke the usually peaceful sounds of early evening. The short dead end housed only himself and the old Murphy couple, who treated their yapping ankle-biter like the grandkid they'd never had. The Murphys would never leave the pooch unattended outside, so Zach immediately became alert, listening for any other oddities.

The couple was elderly, and Ernest had been having memory issues recently. Could be, the old goat simply forgot to bring the dog inside.

With a sigh, he cast a longing glance at the dusky sky and the path he'd intended to take, then headed in the opposite direction across the street to perform his neighborly duties.

But before he'd made it halfway down the stone walk, the Murphys' little yellow cottage lit up, and Mrs. Murphy burst through her front door. Curlers in her hair held in place by a pink scarf, she stumbled down the porch steps, tripped, and hugged the rail with one hand to regain her balance. The moment her wild eyes caught sight of Zach, she staggered toward him.

His body instantly tensed, alert again and ready for trouble. As he rushed to her side, his ears were listening for any out-of-place noises, his eyes searching for moving shadows. He caught Mrs. Murphy's arm just as her pink slippers stuttered on the curb and she spilled forward.

Her small eyes searched his face with a silent scream of fear and urgency. “Please .Â .Â . they're killing Ernest!”

Her eyes rolled backward and she fainted against his chest.

He lowered the old woman to the ground and gently rolled her over, cursing under his breath when he caught a glimpse of her rotund belly. What he'd thought had been a design on the over-fluffed robe was actually shredded, blood-soaked fabric. He followed the trail upward toward her shoulder, watching with sickening dread as her armâ held in place by a few tendons, the bone torn straight throughâfell away from her body, “Fuck!”

Pulling off his t-shirt, he wrapped it around her arm before carefully lifting her and taking her inside his house, where he laid her on the couch. He rushed to the desk in the corner of the living room. Shoving the clutter out of the way, he grabbed the old, hollowed-out phone book and shook it open. A long, sharpened silver stake and a curved silver dagger fell into his palm. He tucked them into his jeans pockets and ran back outside.

Zach had been around long enough to recognize wounds like Mrs. Murphy's, and they hadn't been inflicted by a human. He didn't know what breed of demon he was about to face, but something inhuman was in there with Ernest, and the old guy wouldn't stand a chance if Zach didn't move quickly. Glad he hadn't yet downed a shot of whiskey, he kicked the door open wider and stepped into the chaos of the Murphys' living room. Immediately, instincts that had lain dormant for ten years zinged to life, warning him of a dark soul only a few feet behind him. He slipped the weapons from his back pocket and pivoted to face the Vampyre kneeling over Ernest's body.

He was too late.

The Vampyre bared its fangs and hissed. Zach didn't heed the warning. Gripping the weapons, he rushed forward.

The beast soared over Zach's head. It lashed out with its razor-sharp claws, slicing across his chest. Feeding off the adrenaline rush of being back in the middle of the fight again after so long numbed the pain and kept him on his feet.

When the Vamp sprung again, it kicked the weapons from Zach's hands. He barely had time to locate them again before the Dark Breed was behind him, digging claws into Zach's shoulder. He reached back and grabbed it by its long hair, flipping it over his shoulder. It landed at his feet, but before he could pin it with his boot heel, it rose and flew at Zach, hitting him dead in the chest.

The force sent him backward, tripping over Ernest's ravaged body. As the beast came at him again, Zach gripped it by its throat in an attempt to protect his own. They crashed to the ground. He lost his hold, and before he could regain it, long, deadly fingers closed around his neck. Without his weapons, he was fucked. The Vamp would overpower him in a second and there wouldn't be a thing Zach could do about it except bend over and kiss his own ass goodbye.

The need for air had him struggling, mindlessly shoving at the claws holding him captive. They wouldn't give. Desperate to breathe again, Zach brought his legs up and closed them around the demon's neck, locking his ankles behind its head. As he tightened the pressure, he arched onto his shoulders, twisting until the weight of the demon lifted from him. Unwilling to give it a shot at breaking his legs, Zach quickly released his hold and rolled toward the spike lying a few feet away.

He flipped onto his back just as the Vamp lunged at him again. As it came down, Zach drove the silver between its eyes. The inhuman howl that followed sent Zach searching for his dagger. Locating it beside the recliner, he rushed for it, gripped the hilt in both hands, and dropped to his knees, driving the knife deep into the Vampyre's neck. Using all his weight, he shoved the blade into the floor, pinning the fucker to the wooden planks beneath the shag carpet. As the Dark Breed peered up at him, the agony of the silver penetrating its blood etched all over its face, Zach twisted the dagger and forced it backward, severing the beast's head from its body.

His chest heaving from more exertion than he'd experienced in a long time, Zach struggled to his feet and stumbled toward Ernest. Even though he knew it was too late, he knelt beside the old man's body and checked for a pulse. There wasn't one.

Zach closed his eyes, wishing he'd left his house just a few minutes sooner. Maybe he could have saved the old guy. Maybe the cops wouldn't have to tell Mrs. Murphy that she'd just become a widow.

Loathing the needless death and the evil that had caused it, Zach pulled a knitted blanket from beneath the overturned sofa and covered Ernest with it before leaving that house and sprinting back to his own.

Adrenaline making him dizzy, he checked on Mrs. Murphyâpleased to find her still breathingâand moved into the kitchen, where he dug through the mess on the counter to find his cell phone. Before he could punch in the number of his old friend, a bright red glow spilling from the cracks of the old wooden box he kept on top of the refrigerator caught his eye.

For several seconds Zach simply stared at it. He'd retired from the Order of Ancients nearly ten years ago and had tucked away the stupid necklace shortly thereafter, certain it would never again be used.

The beacon was his call back to war. Back to a life he'd been sure he'd never be given access to again.

His entire body grew feverishly hot and his brain became so thick with thoughts, he couldn't tell if he was pleased or worried by the bright red glow still holding his attention.

It didn't matter. Whatever he felt, he had to answer that damned call.

Sliding the beacon from the box, he slipped the chain around his neck with one hand while the other punched in 9-1-1. He didn't plan on being there when the cops came poking around, but he had to get an ambulance to Mrs. Murphy if she had any hope of surviving. He gave the dispatcher his address as well so they'd find her, then hung up, immediately scrolling through the numbers on his phone. Lance DuLaque, one of the few friends Zach had kept in contact with from his Order of Ancients days, was the Order's go-to guy in the area. If anyone could tell him the reason behind Ares's summons, it would be Lance.

“Lance. It's Merchant. Got a problem.”

“Sorry, mate, now's not a good time. Find some place to lay low until I can call you back.”

“This can't wait. I've got a dead Vamp across the street andÂ .Â .Â .” The orb glowed brighter, warming against his chest. “And a summons from Ares.”

“You've been called up?”

“Looks that way.” Putting the phone on speaker, Zach carried it to his bedroom and pulled a battered guitar case from beneath his bed and a worn backpackâstuffed with clothes and supplies he might needâfrom the closet. Old habits from being called to duty at a moment's notice died hard. “What's going on?”

“Thought it was just rumors, but if they're calling you in, it must be fact.”

Exasperated and desperate to get the hell out of Dodge before cops showed up, Zach slung the case and the bag over his shoulders and rummaged through the nightstand for his keys. “
What's
a fact, Lance? I gotta shitload of trouble over here. I don't have time for riddles.”

The silence on the other end of the line lasted until Zach was in his garage, raising the door.

“Tartarus, mate,” Lance finally said. “It's been opened. And by midnight tonight, the only place Hell will exist anymore is on Earth.”

A New Death: CJ's Story by Vasquez, Josh
Kismet: A Serendipity Novella by Carly Phillips
First and Goal (Moving the Chains #1) by Kata Čuić
Redemption (MC Biker Romance) by Wilde, Blakeley
After You by Julie Buxbaum
The End of The Road by Sue Henry
Secret Pressure (Rhinestone Cowgirls Book 4) by Rhonda Lee Carver
Far-Fetched by Devin Johnston
Spiritdell Book 1 by Dalya Moon
The Firebrand Who Unlocked His Heart by Anne Fraser
Our partner