Read Behind the Sorcerer's Cloak Online

Behind the Sorcerer's Cloak 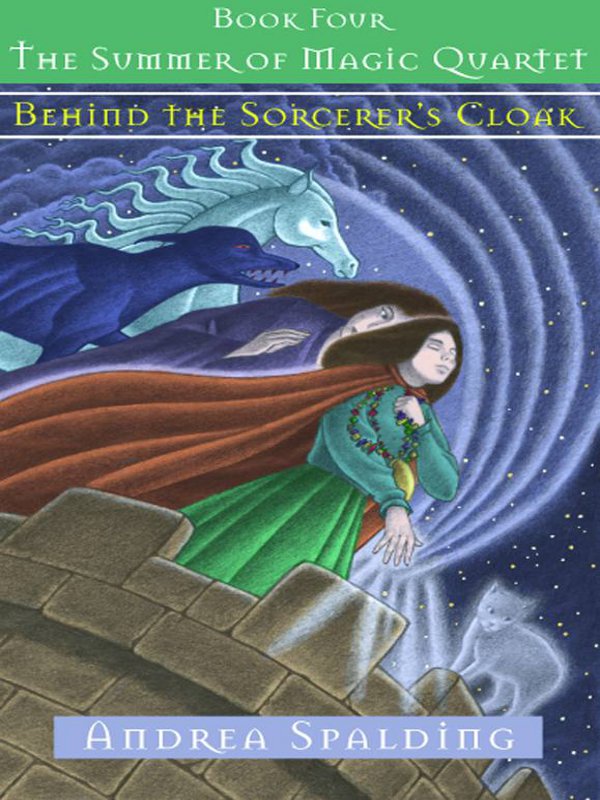 Behind the sorcerer's cloak / Andrea Spalding.
(The summer of magic quartet ; bk. 4)

Summary:
In Book Four of
The Summer of Magic Quartet
, the Dark Being is poised to conquer Earth and after that, the Universe. Only the four Magic Children can restore the balance between Light and Dark.

www.orcabook.com
Printed and bound in Canada

For Graham and Nina, whose friendship has spanned my lifetime.
Thank you for sharing the mystical places of Mann.
Andrea Spalding

A talisman to hone the mind,
A circlet old to hold and bind,
A staff to smite with hidden might,
Beads to link and hold the light.

Note: In the text I use the following as a spell:
Manannan
Beg Mac y Leir Mie goll magh as ny share goll stiagh
. This line translates as “Manannan Beg Mac y Leir, give safe journey out and a better journey home.” These words are the first two lines of the traditional Manx Fisherman's prayer asking Manannan for a safe sea journey. The translation by Fenella Bazin is found in her book
Ree ny Marrey:
Songs of the Isle of Man
and used with permission.

CHAPTER ONE A Stirring in the Mists of Time

CHAPTER FIVE A Circling of Shades

CHAPTER NINE A Maze of Mindspeak 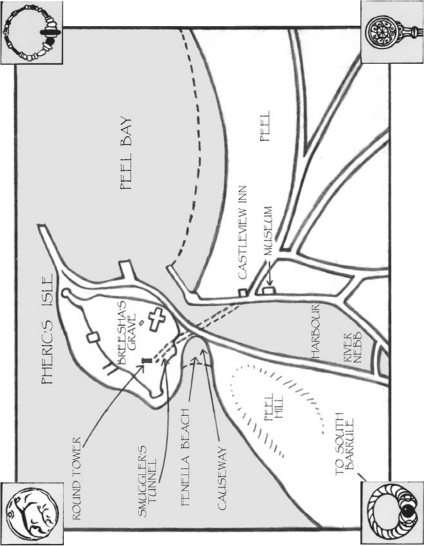 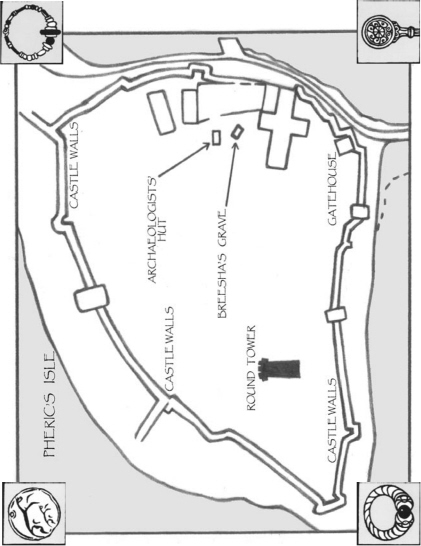 He tilted his head to listen.

Ripples of sound echoed through the Mists of Time. He must heed them. Manannan shook off sleep and stumbled to the summit of his mountain home, South Barrule.

Night mist billowed around him, cloaking, blanketing. It concealed the view. Mist was his to command. He was its Keeper. In return the mist was his cloak of safety, the means by which he hid his island kingdom from unfriendly eyes. Manannan spread wide his arms and slowly raised them.

The mist obeyed his command. It swirled and lifted, though tendrils teased him by covering his eyes.

Manannan chuckled and brushed them away. “I am the Sorcerer Manannan. I am found in the mist and the rain, and you must answer to me.” The threads dissolved and the Island of Mann spread below, washed in the clear starlight of pre-dawn.

It was a small kingdom for such a powerful mage. From his heather-clad mountain, almost the entire island could be seen. But size was of no account. Here worlds met. Magic and humans lived side by side. Manannan's kingdom was the center of Earth Magic: the place chosen by the Sleeper.

Manannan turned his attention to the magical heart of his kingdom, the castle on tiny Pheric's Isle lying off his western shore.

Starlight threw the ruined castle walls into sharp relief. They surrounded the tiny isle like a curtain, protecting the tall Round Tower rising in the center.

Manannan probed deep into the heart of the Round Tower. There, layer upon layer of magic webbed around secrets forgotten by humans.

He relaxed. The webs of magic on Pheric's Isle remained intact. Both Tower and Sleeper slept undisturbed.

Manannan bowed to the universe in a gesture of thanks.

Whatever the disturbance in the Mists of Time, all seemed well on Mann.

He was mistaken. The ripples had roused the Moddy Dhoo.

The feared Black Dog lay awake beneath the castle gatehouse. Its red eyes pierced the darkness. The Moddy Dhoo sensed what Manannan couldn't. The Sleeper was under threat.

The new day dawned, but all was not well across the Irish Sea in the city of Glastonbury, in the heart of England.

Three children were trying not to panic.

Seven-year-old Chantel struggled with tears. Her brother, Adam, was missing.

“What are we going to do? How can we get Adam back when we don't even know where he is?” Chantel's voice shook. Fresh tears trickled down her cheeks as she looked up at the glum faces of her two older cousins. “We can't ask anyone for help. Nâno one will believe he's vanished through a magic portal.” She dropped the piece of toast she was holding and buried her head in her hands.

Her cousins, Holly and Owen, looked for support across the breakfast table. Their friend and neighbor, Mr. Smythe, was the only adult who knew of their adventures.

“This Magic is beyond me. IâI don't know how to help. Our best plan is to wait for the Wise Ones. Trust that Myrddin will bring Adam back.”

Three times Holly and Owen and their Canadian cousins Chantel and Adam had helped Myrddin and two other magical beings, the Wise Ones, outwit a shadowy figure known as the Dark Being.

The first two adventures had been successful.

Owen had helped Ava, the spectacular Hawkwoman, regain her circlet.

The third adventure, when Adam was to help Myrddin regain his staff, had ended in disaster.

“Everything started so well,” moaned Holly. “Adam was brilliant at finding his way through the Spiral Labyrinth and unlocking the entrance into Glastonbury Tor.”

“And it was Adam who released Myrddin's staff from its hiding place in the Crystal Cave,” agreed Owen. “He was fantastic. If only he'd not grabbed Zorianna's cloak when she pinched the staff from Myrddin. That was really daft.”

“No, it wasn't,” said Chantel, bristling. “Adam was brave. Really brave. I'd like to see you standing up to the Dark Being's emissary.” She gave a sob. “I just wish he'd let go before they vanished through a portal.”

Resilience by Bailey Bradford
No Place for an Angel by Elizabeth Spencer
The Mating Season: A Paranormal Shifter Romance by Jade White
SWEET CALLAHAN HOMECOMING by Tina Leonard
Mercy Seat by Wayne Price
Paris, Paris: Journey Into the City of Light by David Downie
Climbing Out by Lila Rose
Poison Princess by Kresley Cole
The Time of Her Life by Robb Forman Dew
The First Warm Evening of the Year by Jamie M. Saul
Our partner