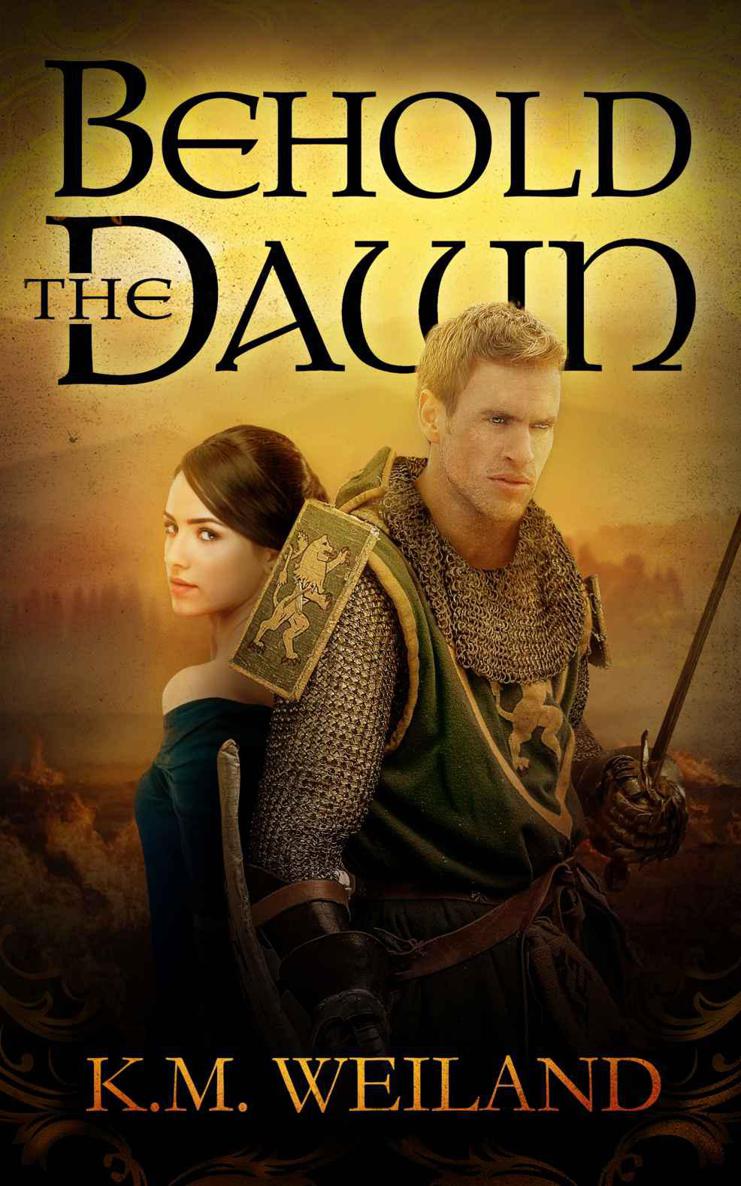 Behold the Dawn
Copyright © 2009
K.M. Weiland
Map by Joanna Coleman.
Scripture quotations taken from the King James Version.
“I trained myself a falcon” by Der von Kürenberg (c.1150-1170).
All rights reserved. No part of this publication may be reproduced, stored in a retrieval system, or transmitted in any form or by any means electronic, mechanical, photocopying, recording, or otherwise without the prior written permission of the publisher and copyright owner.
Published by PenForASword Publishing
P.O. Box 448
Scottsbluff, Nebraska 69363
Printed in the United States of America.
ISBN: 978-0-9789246-1-4

Dedicated
to my beloved Savior,
who has given us a fresh
beginning in each new day.
May we always have the strength
to reach out and grasp that perfect gift.

And to Adrie, who lets Annan live in her closet. 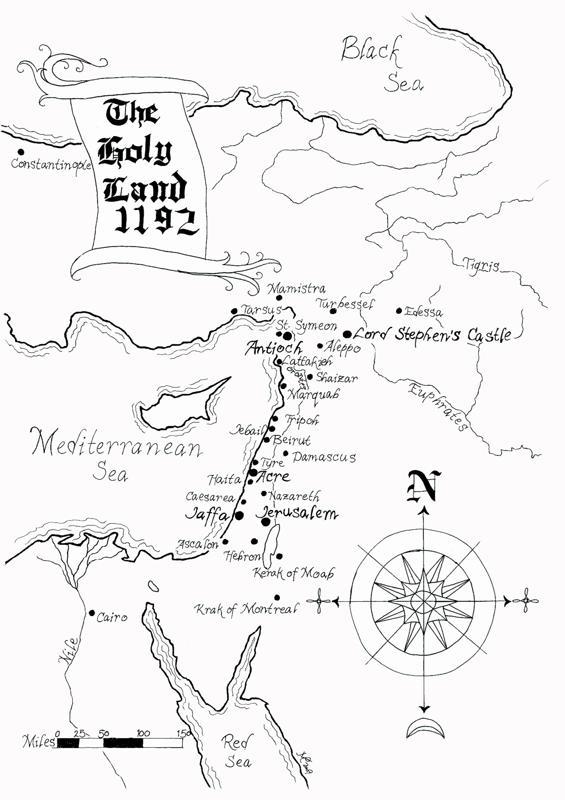 MANY PEOPLE HAVE been instrumental in helping this project to publication. I am deeply humbled by the time and encouragement they lavished upon me while I was writing and editing this story. Without them, this book might never have made its way into your hands, and it certainly wouldn’t have been anywhere near as good a story. In no particular order, those people are:

My #1 fan, my unfailing encourager, my sister: Amy.

My family: Ted, Linda, Derek, and Jared, for putting up with me and all my writerly craziness and for supporting me and my work unswervingly.

Thank you all. May you be blessed as you have blessed me.

Heroes are forged on anvils hot with pain,
And splendid courage comes but with the test.
Some natures ripen and some natures bloom
Only on blood-wet soils; some souls prove great
Only in moments dark with death or doom.
— Ella Wheeler Wilcox

MARCUS ANNAN HAD killed before. He had killed so many times he could no longer remember them all… so many times he had become inured to the ache of sorrow as he stared into the faces of the dead.

Some had deserved to die; some hadn’t. It mattered not. They were all dead, and he could not bring them back. Unlike himself, they would never have to wonder if the end would ever come, if life would go on and on forever, taunting in its gaiety, tormenting in its bleakness.

As he reined his horse back amidst the chaos of a southern
tourney
and watched his allies crash into the opposing line of horsemen, he wondered if perhaps he had traveled this dark path beyond his ability to return. He watched through the barred vision of his
great helm
, concentrating on the steady rhythm of his breathing, forcing down the fire of battle that coursed through his veins as he waited for his quarry to extricate himself from the clangor of battle.

Today, Marcus Annan—
tourneyer
, soldier, and wanderer—would bring the tally of deaths yet a little higher as he played one more round in this bloody, accursed game of mock battle that had become the only pursuit of his shattered life. The legend of his name would grow, and the burning flash of battle fire would once more blind the sorrows of his heart. He would end one more life, even as his own hurtled onward, unable to escape the demons that wailed as loud on this day as they had upon their birth almost a
score
of years past.

Only two horses’ lengths ahead, a knight in a purple
surcoat
freed himself from the roiling knot of iron and flesh, sword lofted in victory. Annan exhaled. This would be his last conquest of the day, chosen from among the dozens of other competitors because the knight in the purple surcoat was one of the few who could possibly challenge his strength.

Annan released his hold on his
destrier
’s mouth, and the horse leapt forward. Long strides devoured the distance between him and the purple knight. Lifting his sword, he felt the familiar swell of his muscles beneath their covering of mail.

A knight from the opposing side swung his sword as Annan galloped past, his blow ringing against Annan’s
buckler
. The arm behind the blow was strong, and Annan felt the ache all through his bones. He afforded his attacker a glance, swinging hard with his sword and catching the knight full across the chest, not even touching his shield.

From the corner of his left eye, he saw the descent of another knight’s blade. His horse wheeled at the touch of his leg, and he smashed his opponent’s sword from his hand. The man lifted his metal-sheathed gaze in panic.

But Annan left him. He had more pressing matters to deal with than an unarmed opponent: The purple knight had seen him.

The man reined his destrier around, sword leveled at Annan’s chest, a wordless battle cry echoing inside his helm.

Joy of the fight—his only joy—swelled in Annan’s heart, and he drove his spurs into his blood bay’s flanks. The horse leapt forward, grunting through its nostrils.

The purple knight’s sword struck Annan’s with all the furor of a young body and determined mind. With a flick of his wrist, Annan separated the blades even as he thundered past. The knight turned back to confront him, and he brought his sword before his face in a salute, perhaps recognizing Annan as the famed Scottish tourneyer. Then he sheathed the sword and drew, from beneath the purple brocade of his horse’s
caparison
, a new weapon. The setting sun, burning gold through the dust of the field, glinted against the iron tip of a
war hammer
.

Annan’s blood pumped heat into his muscles. The rules of this tourney banned the war hammer from competition; its lethal heft would crush armor and shatter flesh and bone alike. His fist tightened on his sword hilt, the leather finger of his
gauntlet
creaking against the steel of the crossguard. Marcus Annan wasted no mercy on duplicitous
knaves
.

The purple knight laid his spurs to his horse. The war hammer rose above his head, its point flashing once across the face of the dying sun. Annan charged to meet him.

The war hammer caught his blade, and his horse, wearied from the long day of fighting, stumbled in the mud and fell almost to its knees. The hammer skidded down Annan’s blade, toward his crossguard, and the purple knight jerked hard, trying to wrench the hilt from Annan’s hand. The sharkskin wrap on the hilt skidded against the leather palm of Annan’s mail glove. He was losing his grip; another moment and he would be defenseless. The knight’s mount smashed into Annan’s knee, and the destrier staggered yet again.

Dropping the reins, Annan heaved all the strength of his sword arm against the unfair leverage of the war hammer and clamped his other hand on the hammer’s back spike. With a roar, he ripped it free of his blade and spurred his horse.

The destrier scrambled, mud splattering in wet clods, and Annan twisted in his saddle to strike his opponent’s vulnerable back. From the depths of his helmet, he could hear the knight’s cry of pain, and he wheeled his destrier in time to see the recoil of his opponent’s body against his
saddlebow
.

He waited, hilt resting against his thigh, as the man pushed himself aright and straightened his contorted body. Again, the knight lifted his luckless hammer and bloodied his mount’s sides with his spurs.

Annan remained as he was, his only movement that of his sword swinging away from its resting place on his hip. He cast one glance at the waning tangle of battle to his right, and his fingers tightened on the reins. The purple knight lifted his weapon high above his head, a scream upon his lips.

Annan foresaw the moment of the blow, sensed it in every taut line beneath the purple surcoat. With the grace and strength of a man who had spent more than twenty years in the armor of a professional soldier, he hurled his weight into a stroke that deflected the war hammer and pierced the mail above the purple knight’s heart.

The knight froze. His limbs yanked tight, his sword arm falling to his side. Annan waited as the body slumped forward onto the saddlebow and, at last, tumbled from the skittish destrier’s back. The war hammer, its gleam still unmarred by the blood of a first kill, crashed to the trampled sward, inches from its owner’s outstretched hand.

Annan raised his head. Shouts and the clatter of arms echoed in the heavy dusk. Against the horizon, framed by the dirty huts that bordered the field, men fought on to claim the last ransoms of the day. Annan’s arm fell to his side, and he reached to take the purple knight’s reins. The horse would be his only gain from his victory. No one ransomed the dead.

He touched his rein to his destrier’s neck, ready to return to camp. The battle fire had fled, draining his veins to emptiness. Another battle won, another tourney at an end. Another day he would never have to live again.

Against the backdrop of the encroaching woods, a stranger in the dark robes of a monk stood, watching him. Annan’s brows came together. Holy men did not frequent the fields of a
tournament
, save to spit in disgust or cross themselves in horror.

Faceless beneath the shadow of his
cowl
, the monk stood with his hands hidden in his broad sleeves. He was not a tall man, but his shoulders were broad, his chest deep. He said nothing, and he did not move. He only watched.

The monk’s head shifted away from Annan, and he seemed to stare at the fallen knight. Then he turned and staggered into the forest, every step warping his body as he struggled to move his crippled feet.

As the shadows swallowed the monk’s ragged limp, Annan’s heart beat a strange rhythm. He did not believe in superstitions, the guidance of the saints, or the power of visions. Indeed, he believed in little at all, save the strength of his own arm. But something about the sight of this crippled monk whispered a chill across his skin and prodded him to flee.

He turned his horse’s face and spurred hard. He didn’t look back to see if his allies were bending to gather their spoils, or to see if his opponents had noticed and reacted to their dead confederate.

And he did not turn to see if the monk had resurfaced to watch him retreat.

After collecting the day’s ransom money and selling the purple knight’s horse and accoutrements, Annan returned to camp. As he entered the maze of tents spread beneath the city walls like the parti-colored cloak of a minstrel, he reined his destrier to a walk. The camp and, beyond it, the city of Bari bustled with all the color and noise of a foreign tourney. Even here, so near the earthly domain of the Popes, after almost two score years of threatened excommunication, the tournaments thrived.