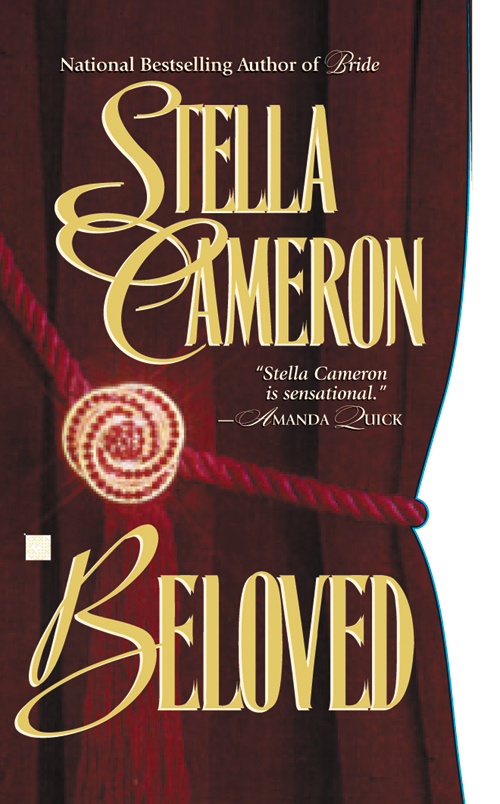 PRAISE FOR
BELOVED
AUTHOR STELLA COMERON
AND HER NOVELS

"A BEAUTIFUL, EMOTIONAL BOOK WITH A
HAUNTINGLY LYRICAL QUALITY."

"A SENSUAL,ROLLICKING LOVE
A STORY ABOUT THE MISCHIEVOUS MADCAPSIDE OF LOVE."

—
A Little Romance on Bride

"CAMERON LEAVES YOU BREATHLESS,
SATISFIED . . . AND HUNGRY FOR MORE."

Only by Your Touch

Warner Vision is a registered trademark of Warner Books, Inc.

Castle Kirkcaldy doesn’t exist, but the village of Dunkeld is very real, as is Charlotte’s Square in Edinburgh. The land of the Rossmaras is as beautiful in fact as it is in fiction, and I hope many of you will visit Scotland.

The Franchots are Cornish. Not far west of the charming gray-stone town of Fowey are the wild hills where I imagined Franchot Castle.

London was once my home. As with all other locations in FASCINATION, CHARMED, BRIDE, and BELOVED, I’ve walked every mile with the Rossmaras, the Franchots, and the Avenalls. London is an incredible city, unchanged in so many ways. If you stand on Bond Street today and pretend, you will swear you can see Ella, or Justine, or Pippa, or Grace, each carrying a hatbox, perhaps!

If you’re ever in Maidenhead, in Berkshire, you may come upon a lovely tudor house called Beehive Manor was the Dog and Partridge Inn when Ella and Saber stayed there. You may stay at the Beehive Manor today, as I have.

Travel to the north Costwolds, to Worcestershire, and the ancient village of Bretforten, and you’ll find The Fleece, a National Trust inn dating from the sixteenth century. Bretforten Manor, owned by Queen Elizabeth I in 1576 (and another lovely place to spend a night or so if you’re in the area), stills looks very much as I have described it.

“Your call, I believe, Avenall.”

Mumbling into a glass of hock, Lord Langley squinted at his cards.

Probably true, Saber decided. After all, he’d doubted his own sanity for four years—ever since the first endless days and
nights of half-life after he’d been left for dead by a hill tribe in India.

And now any doubt had been removed. He must be mad. Dressed in a flowing gray gown, its head and shoulders draped about with
a drifting gray veil, the ghost of Sibley’s Club stood, quite still, upon a small raised platform at one end of the smoking
room.

“Things aren’t what they used to be, eh, Langley?” Sir Arthur Best remarked querulously. Ropes of twisted blue veins showed
in his thin, ancient hands. “Time was when there were five or six full tables in this room every night. Deep play in those
days, too. When there wasn’t a poetry reading or a damn good political wrangle in progress, eh?”

Langley inclined his head. Meager light glimmered on his mane of white hair. Coals burned low in a smoke-stained marble fireplace,
as low as the candles guttering in sconces around mahogany-paneled walls.

Saber’s skin prickled. He was grateful that his overlong hair served to shadow the pallor he felt upon his face.

“Thomas,” Colonel Fowles, the fourth at the table, summoned a hovering steward. “The fire, man! And two more bottles.”

They didn’t see it.

Of course not. They were old, but not mad. He was a young man in an old men’s club, and he was quite insane.

Saber rested his jaw on a fist and contrived to look toward the velvet-curtained dais without entirely turning his head.

The ghost revolved, its full silken robe billowing wide, only to wrap tightly about the form—or should that be lack of form?—as
it reversed direction.

Coals clattered in the grate.

The colonel coughed, his lungs rattling as if in an empty cavern. He cleared his throat. “Fine weather for March, hmm?”

“Should say so,” Sir Arthur agreed. Purplish hammocks of skin hung beneath his eyes. “The gay young things will be showin’
off their finery in the Park, no doubt.”

“I’m feelin’ good enough to chase a gay young thing or two meself,” the colonel announced, guffawing, before another gale
of coughing shook him.

Sir Arthur’s pale eyes flickered to his companion. “I might just keep you company, sir,” he said, chuckling. “Never felt better
meself, either.”

The platform was intended for readings and the like. Heavy gold ropes looped back the deep-red, faintly dusty curtains at
each side. The lady in gray hovered near one of those curtains.

A ghost was a ghost. Plain and simple. A manifestation of who knew what?

Saber looked from one of his companions to another. They studied their cards, clearly oblivious to any apparition.

But they were not mad.

Thomas returned, passing within feet of … She danced!
Danced
. Twirling, her feet barely touched the boards. Ghosts’ feet didn’t have to touch anything, did they? Saber glared at Thomas.
The man proceeded serenely past the dancing spirit, his face in its customary impassive folds.