Read Beneath the Forsaken City Online

Beneath the Forsaken City 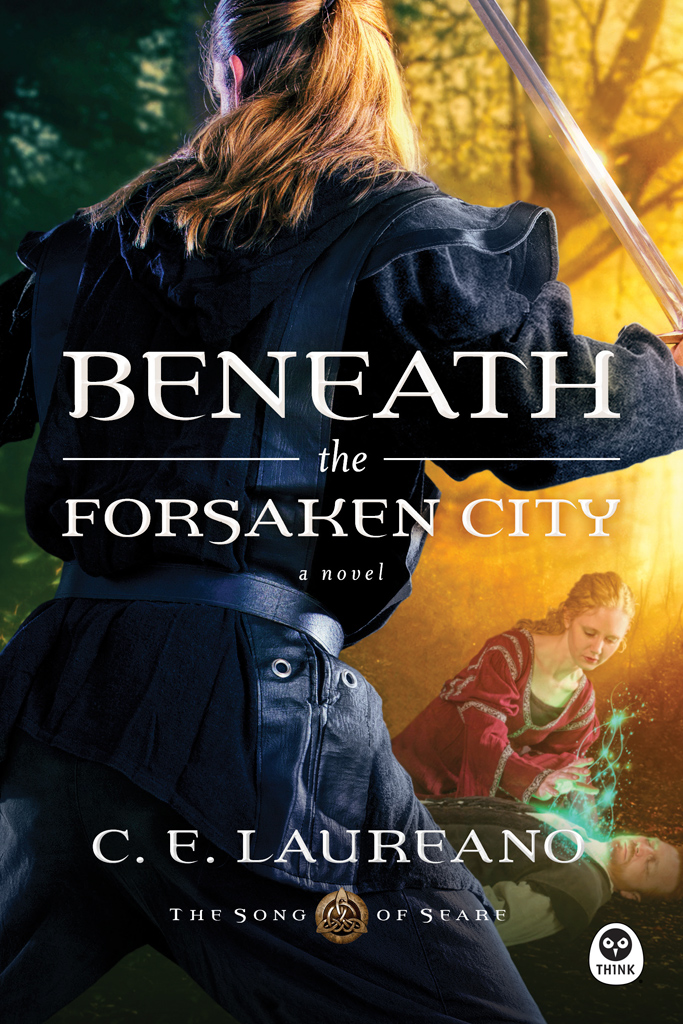 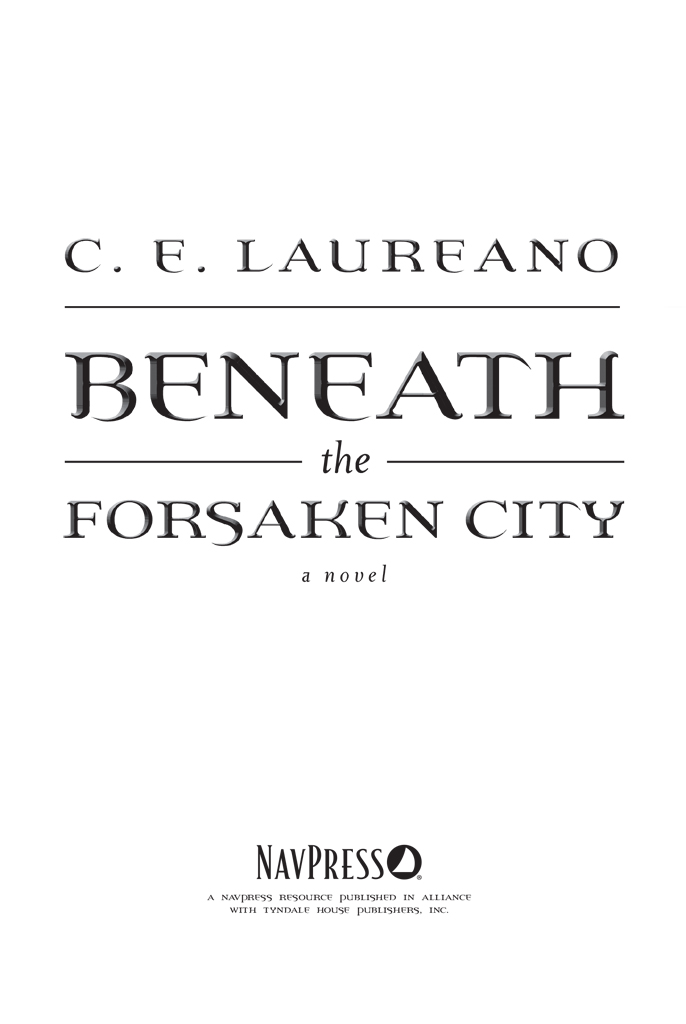 NavPress is the publishing ministry of The Navigators, an international Christian organization and leader in personal spiritual development. NavPress is committed to helping people grow spiritually and enjoy lives of meaning and hope through personal and group resources that are biblically rooted, culturally relevant, and highly practical.

For a free catalog go to
www.NavPress.com
.

NAVPRESS
and the NAVPRESS logo are registered trademarks of NavPress, The Navigators, Colorado Springs, CO. Absence of
®
in connection with marks of NavPress or other parties does not indicate an absence of registration of those marks.

TYNDALE
is a registered trademark of Tyndale House Publishers, Inc.

Some of the anecdotal illustrations in this book are true to life and are included with the permission of the persons involved. All other illustrations are composites of real situations, and any resemblance to people living or dead is purely coincidental.

Beneath the forsaken city : a novel / by C.E. Laureano.

Summary: Conor and Aine, torn apart once more, are surrounded by despair and danger but they cling to Comdiu’s plans for them and the homeland that depends on their survival, and allow themselves to be molded and refined for the challenges to come.

My most enthusiastic (and unexpected) fan.

I’m writing as fast as I can, I promise! 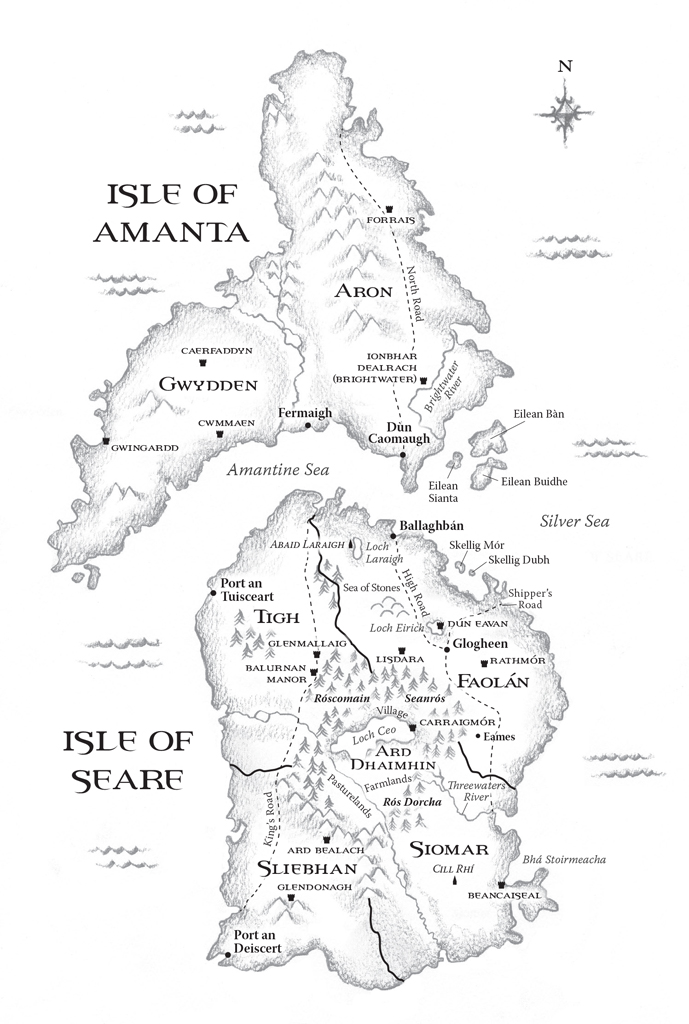 Conor Mac Nir leaned against the railing
of the
Resolute
in the dark, watching the choppy seas splash along the cog’s wooden hull. Overhead, storm clouds roiled, threatening to unleash their fury on the small ship. Squalls on the Amantine Sea were hardly unusual, but this one had hovered for nearly two days, circling like a bird of prey. No natural storm behaved this way, which left only the other, more unsettling explanation.

The druid is dead. I saw him fall. No one could have survived a wound like that.

Yet, after all they had been through, the memory held little reassurance. He’d seen the extent of the druid’s powers before they fled Seare. Diarmuid commanded his warriors with sorcery and compelled the creatures of the mist to do his bidding. Conor’s uncle may have begun the bloody war that laid waste to the island, but the druid controlled it. Conor could not deny the possibility that the sorcerer had once more cheated death.

Conor cast a glance back to the passenger cabin beneath the bulkhead, where his new wife, Aine, still slept peacefully. Taking her back to her birthplace would keep her safe for only so long.
Her visions implied that the druid had a far larger plan than the mere conquest of their tiny island. It was only a matter of time before war touched Aron as well.

Unless I stop it.

A sudden gust whipped his blond hair from his braid, and the first drops of rain spattered down on him. He should go inside before the storm worsened, hold his wife, and enjoy their last few days together, but Aine was far too perceptive. She would look into his eyes and know what troubled him. He rested his forehead on the cool, damp railing and let out a sigh.

“I think it’s watching us.”

He jerked his head up again. Aine stood beside him on the deck, her honey-colored hair blowing loosely around her shoulders. His breath stilled for a moment. Even in the ill-fitting dress she had scavenged in their flight, her eyes shadowed by exhaustion and anxiety, she was breathtaking.

Perhaps all men felt that way about their wives. Or perhaps it was just the knowledge of the even greater obstacles awaiting him that made him want to remember every moment of their short reunion.

“Do you sense something?” he asked, looking back out onto the choppy sea.

Aine ducked beneath his arm and lifted her face to the sky. “It feels wrong. But that could just be my own worry.”

Not likely. They both possessed gifts of Balus. While his gift allowed him to transform the language of music into magic, hers gave her, among other things, an awareness of the power that surrounded them, light or dark. Her sense of the storm’s wrongness only confirmed his suspicion about the source.

The smattering of raindrops increased to a steady rain, and Conor squinted at the sky, wondering if the storm could possibly know their thoughts.

“Come inside before we both get soaked.” Aine laced her fingers through his and tugged him back toward the cabin.

He followed her, ducking beneath the low frame, and shut the door firmly behind them. Dim lamplight illuminated the tiny berth: wood-paneled walls, a narrow bunk, a single stool affixed to the floor. He’d begun to think of the ship’s cabin as a haven, isolated from the worries outside. Here they were ordinary newlyweds, beginning their life together, not storing up memories for a separation that might become permanent.

“You’re wet.” Aine gestured for him to hold up his arms and pulled the damp tunic off over his head. Her hands lingered on his shoulders and then softly slid down his chest.

“You’re trying to distract me.”

“I’m assessing your injuries,” she said sternly, but her lips quivered against a smile. Then she sucked in her breath, and her playful manner slipped. “I don’t believe it.”

Conor looked down at himself, startled. Two days ago, his body had been mottled with blue and purple bruises left from almost constant travel and fighting. Yesterday they had already faded to the yellow and green that indicated healing.

Today they were gone, as if they had never existed.

Aine lifted her gaze in surprise and then turned him to examine the gash on his arm, the one he’d gotten when fighting their way free of his uncle’s fortress. The stitches were still in place, but where the wound had been now lay only a weal of healed skin.

“How is this possible?”

Conor shook his head. It shouldn’t be. He’d never shown any particular inclination toward fast healing. Then again, during his time with the Fíréin brotherhood, he’d discovered a number of things about himself that shouldn’t be possible.

“What do we do now that it’s healed around the stitches?” he asked.

“The gut will dissolve on the inside. I can try to cut the bits on the surface, but it will hurt if I have only a dagger.”

“It can wait until we make landfall.” The idea of cutting tiny stitches with a sharp blade on a pitching ship didn’t sound appealing. Conor grinned at her. “Besides, I can think of better ways to use our time.”

Aine blushed, but she lifted her face to accept his kiss. He spun her around and pulled her onto his lap on the narrow berth, his arms tightening around her.

She stilled and looked into his eyes. “You’re going back, aren’t you?”

His heart lurched. Right now, the last thing he wanted to think about was leaving her. He forced his muscles to relax. “If I can find the harp and rebuild the wards, it will cripple their forces. It’s my responsibility.”

“I know. Whatever happens, just remember I love you.”

“And you are my world, Aine. Never forget that.”

He kissed her again, and his resolve slipped. It wasn’t right. He’d given her up once with the intention of doing his duty to Seare, and where had that led? They’d been betrayed, Conor nearly killed, and Aine kidnapped. They’d barely eluded Diarmuid’s grasp, and for all Conor’s trouble, he was no closer to finding Meallachán’s harp, the object of power he needed to rebuild the wards. If he’d only kept her close, men wouldn’t have died needlessly protecting her.

Aine was his wife now. That made her his responsibility, didn’t it? What kind of man was he if he abandoned her?

The ship jerked sharply, and Conor thrust out an arm against the bulkhead to keep them in the berth. The movement was followed by a drop in the other direction. Overhead, the tap of raindrops turned into a deafening roar.

“I should see if they need an extra set of hands.” Conor eased
her onto the bunk beside him and reached for his tunic. He shrugged it on and then leaned over and dropped a light kiss on her lips. “I’ll be back.”

The situation on deck was worse than Conor had expected. He slipped and slid across the wood as sheets of rain poured down on him. A jagged fork of lightning split the sky, followed by a crash of thunder that nearly vibrated him off his feet. The deck tilted at an odd angle, and he went down on one knee. When the ship righted itself, he struggled to his feet and made his way toward the stern.

Captain Ui Brollacháin braced himself on the starboard side, feet spread, attempting to hold the rudder steady amidst the chaos.

“What can I do?” Conor shouted.

The captain gestured to where crewmen fought the wind’s pull on the ungainly square sail. Conor started toward them as a huge wave crashed over the port rail. Water swirled around his calves and nearly swept his feet out from under him, but still he slogged forward.

Foreboding prickled the back of his neck. He glanced over his shoulder, and his blood turned to ice. Aine clung to the cabin’s open door, her hair and clothes plastered to her by the driving rain, water rushing around her feet. Her lips moved, but her shout was lost on the wind.

“Stay there!” he yelled as he made his way back to her. “Go back inside!”

Conor was nearly within arm’s reach when a huge wave abruptly turned the ship sideways. He hit the deck hard and skidded toward the railing, grabbing a coil of rope to slow his slide. Aine scrabbled for a handhold, but her fingers just scraped over the slick decking. A scream ripped from her as the flow of water carried her over the rail.

The ship shifted back to level. Conor scrambled to the side in time to see Aine surface between the massive swells, surrounded by jetsam and pieces of splintered wood.

The terrified thought crystallized in his mind, blotting out all else. Without stopping to consider the wisdom of his action, he clambered over the rail and dove cleanly away from the ship.

The impact of the water momentarily stunned him. Instantly, the cold curled through his extremities as the churning waves bore him downward. It took him several moments to figure out which direction was up. He broke the surface with a gasp and threw a panicked glance around him.

There. She was still above water, but the terrified look on her face said she wouldn’t last long.

Conor swam against the pull of the water with powerful overhand strokes until she was within arm’s reach. But each time he came near enough to grasp her hand, the swell carried him backward again. When her head dipped below the water, it took longer for her to resurface.

Then, finally, the water gathered beneath him, promising to carry him that last inch to her side.

“Grab my hand!” he shouted.

His fingers slid over her wet skin and then held. But before he could pull her to him, a wave crashed over him with the force of a war hammer, breaking his grip. Aine slipped from his grasp, taking with her his hope and his last shred of consciousness, everything but the roiling blackness of the sea.