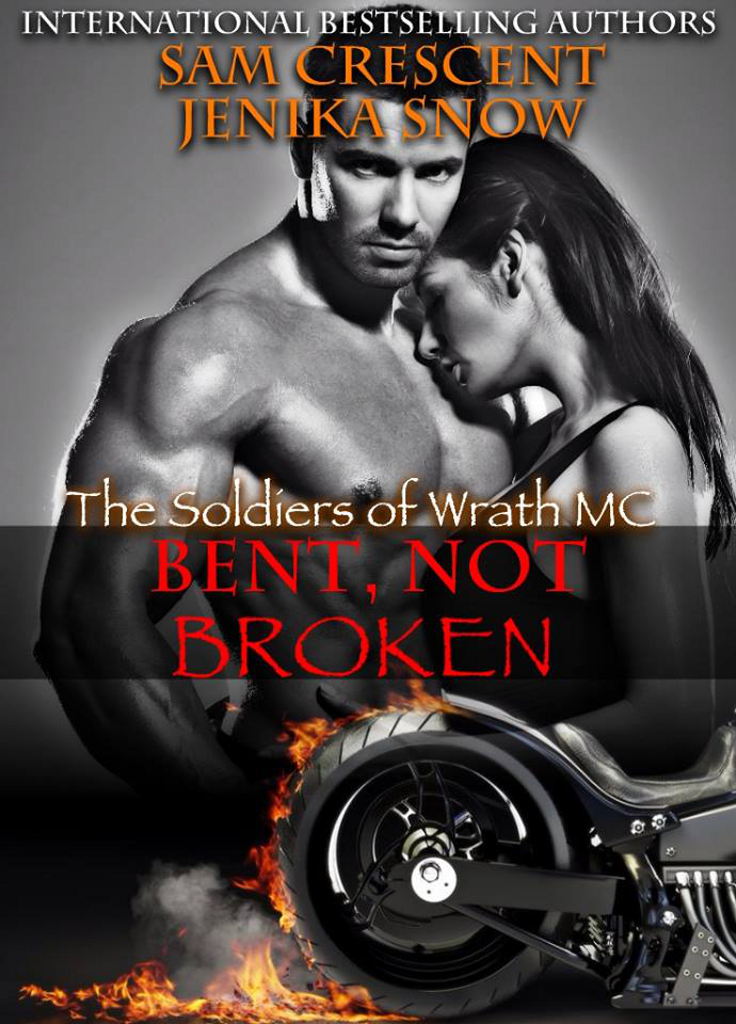 Edited by
Editing by Rebecca

ALL RIGHTS RESERVED: The unauthorized reproduction, transmission, or distribution of any part of this copyrighted work is illegal. Criminal copyright infringement is investigated by the FBI and is punishable by up to 5 years in federal prison and a fine of $250,000.

This literary work is fiction. Any name, places, characters, and incidents are the product of the author’s imagination. Any resemblance to actual persons, living or dead, events or establishments is solely coincidental.

Please respect the author and do not participate in or encourage piracy of copyrighted materials that would violate the author’s rights.

Pain is a lasting feeling, emotion, and can consume a person without any discrimination. Amy Holland knew all too well what pain did to someone. She has been living with it for far too long, and it is all because of her father.

Reese “Joker” Whitman has put his old life behind him. He is now just Joker, part of The Soldiers of Wrath, an outlaw MC that rules his town. Despite the hard edge he carries around, the violence and destruction he’s been known to deliver, Joker wants Amy, the daughter of the woman his father married. Amy might be considered family, but she isn’t blood, and he wants her more than he’s ever wanted anyone in his life. However, he has to tread lightly, because she’s been hurt, and she may never be able to give herself fully to him.

When she finally sees Joker for who he is, it isn’t fear or pain that consumes her; it is hope and desire. But can she give herself to the biker when she sees herself as too damaged be loved?

Sam:
To all the readers for making all of this possible. You’re amazing support always leaves me without words. You’re all wonderful. To Jenika for asking me to be part of this wonderful series, and to Rebecca for her patience while editing this book. The Crescent Snow Team without a doubt for asking for this book.

Jenika:
I’d like to dedicate this book to all the readers and their continued support. Without all of you none of this could be possible. Also, a huge thank you to the Crescent Snow Team. You guys are incredibly awesome, and I appreciate each and every one of you! And last but not least I’d like to thank Rebecca for all her hard work during the editing process.

Connect with the Authors

Excerpt from Owned by the Bastard

Even as Amy gave herself a warning, her sixteen-year-old body just wouldn’t stop, turn around, and go back the way she came. No, she kept walking toward the pleasured moans coming from her step-brother’s bedroom. This was dangerous, but she couldn’t stop. She wanted to see what was going on and at the same time, she didn’t want to know. The moans were self-explanatory.

Licking her dry lips, she crossed her arms over her chest, wanting to find some comfort. Finding none, she stepped closer to his bedroom. Her mother and step-father had left to go out to dinner. She hadn’t really been paying attention. Her mother, Brenda, asked her not to bug Reese.

She stepped closer to the door. He hadn’t locked the door and looking up from the carpet, Amy’s heart literally stopped. There was no turning back. Reese was completely naked, and she saw several of his many tattoos. None of them made sense as she stared at him across the room. He was four years older than she was, so much more mature than even that though. He’d not seen her yet. She couldn’t look at anything but him. His body was a work of art, rock hard, ripped, muscular; it was everything she’d read about in the romance books she kept hidden in a drawer. The past, and her horrors, reared their head, and she clenched her hands. She wouldn’t think about her father, about any of the things he had done to her, not during a time like this. She could never tell anyone. The pain of the past had to stay in the past where there was no escape. It was her and Daddy’s little secret. It had been until Amy had finally told her mother, finally shared the shame she lived with.

Just thinking about her real father made her shudder.

Cutting off the memory of him, she gazed at Reese’s body. The way he was stood before the bed, she got a clear side shot of his body. He was stood in direct sight of the door. When he turned to show his back, she saw the tattoos, then when he faced his prey, she got the length of his body. His cock was covered in a condom and stood out, slick. In the light of the room she saw he was covered in a woman’s cream. Her gaze moved to the bed. There, she was shocked. A woman was bound to the either side of the headboard and not just her hands and legs. Her tits were bound separately by rope. The binding was a little tight, and it gave them a red tint in contrast to the woman’s otherwise pale flesh. The woman’s mouth was open slightly and between her lips was a thick piece of rope.

Reese stroked his fingers up the inside of the woman’s thigh, going farther up until he landed on the lips of her pussy. Amy was rooted to the spot as he stroked from the woman’s cunt up to her clit. The woman tensed on the bed. Her screaming muffled by the rope in her mouth.

“Bad girl.” Reese slapped her pussy and Amy couldn’t control the whimper that came from her lips.

Before she could cover the sound, Reese tensed, looking toward the door.

She didn’t wait around. Turning on her heel, she ran from the room. Charging downstairs, Amy needed to find escape. There was no way she could face him. She ran out of the back door, rushing past the garden. Reese yelled for her to stop but she couldn’t stop. Escape was the only thing on her mind. She had to get away from Reese and what he was doing to that woman.

And yourself. Don’t forget that, Amy. Run from yourself.

Watching Reese’s control over the nameless woman had done something to her body that she didn’t understand or didn’t want to think about. From the first moment she’d met Reese there had been something about him that lured her in. When they were alone, she wanted to tell him all of her secrets, the same secrets she’d been forced to keep to herself. He’d never once judged her. Gripping the nearest tree, she dragged in a deep breath. Closing her eyes, she rested her head against the rough bark.

Breathe in, breathe out.

Each inhalation and exhalation was hard for her to do.

You’re useless. No one is ever going to want you. You’re broken, Amy. Broken and so alone. Who will want anyone who is soiled like you?

She sobbed as her inner fears refused to be pushed aside. Tightening her grip on the tree, Amy broke down. She dug her fingers into the bark for support.

That’s a good little girl. Just lie down and Daddy will take care of you.

The echoes of the past were too close.

“Amy,” Reese called out to her.

Keeping her eyes closed, it took every ounce of strength she had to push the demons away. No one could help her. She was all alone.

He pried her hands from around the tree. He held her tightly, stroking her hair. “I’ve got you, Amy. I’m not letting you go.”

“You’ve got to,” she said. He didn’t know the truth about her. She was broken, ruined, soiled.

Reese didn’t let her go. He held her tightly, kissing the top of her head. “You’re stronger than this. Push them back, Amy.”

He’d always known she fought some demons yet he never asked her what they were. She broke down, sobbing against his chest. He had put on a shirt before he came for her.