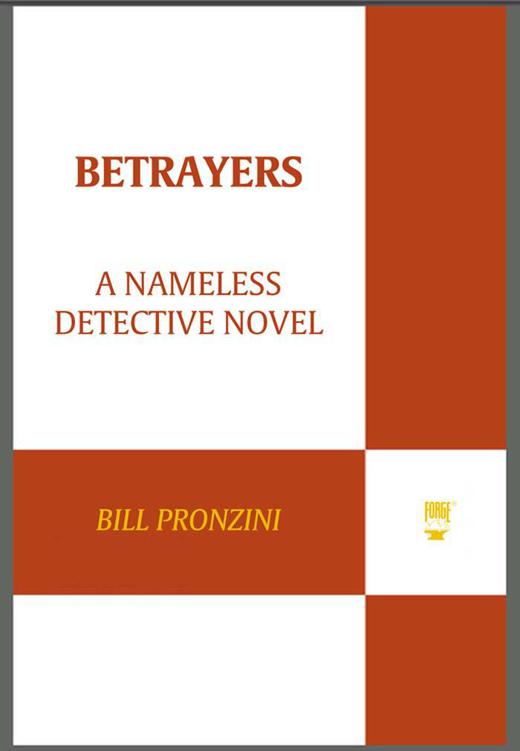 Copyright © 2010 by the Pronzini-Muller Family Trust

For Elisa and Michael Seidman

The tests came back negative.

He hadn’t given her AIDS or any other STD.

Her first reaction was relief, naturally, big relief. The way Vonda and Ben had talked about Lucas Zeller, Tamara had started picturing him as a walking germ factory capable of infecting the whole damn city. Scared, all right. More scared than she’d ever been in her life during that endless two-week wait for the test results.

When the relief wore off, she got mad all over again. At herself to begin with, for having unprotected sex with a virtual stranger. Only once out of the six times they’d got it on, but once was one too many. Stupid. As stupid as you could get in a city like San Francisco, where STDs were rampant, where thousands had suffered and died in the AIDS scourge.

No mystery about why she’d rolled over so quick and easy for somebody she hardly knew. Almost a year since Horace had deserted her, almost a year since she’d last gotten laid, and Lucas had seemed all right, intelligent, cool, nice quiet eyes, gentle way about him, and he hadn’t come on strong when
they met at Vonda and Ben’s wedding reception or when he called her up the next week.
She
was the one who practically dragged him into her bed that first night. Lord, she’d been horny . . . but that was no excuse. She should’ve known better. She did know better. Fool!

Then she started thinking about the phone conversation she’d had with him, the day after Vonda told her he was part of one of those secret little fraternities of black men, most of them married, who got together now and then to drink, maybe smoke some weed, and have casual sex with one another. Closet bisexuals who refused to admit they had a gay side. If the AIDS scare hadn’t been enough to bust up her brief relationship with Lucas, him being on the down low would’ve done it. That and the phone conversation. Thinking about it made her even madder. At him again, this time.

The only phone number she had for him belonged to his creepy mother, Alisha . . . if she was his mother. And he hadn’t given it to her; she’d gotten it from the redial on her home phone, after he used it to check in with Mama the second night she slept with him. So she’d called up, mad and scared, and he’d been there, and she’d slammed into him, hard. Didn’t faze him a bit. He came back at her all cool and offhand and slick as grease.

“You shouldn’t jump to conclusions, Tamara. None of it’s true.”

“Of course not. Even if I was, don’t you think I’d be very careful, take precautions?”

“Rest easy. I had myself tested not long ago, but not for that reason. I’m sexually active and mistakes happen. You ought to
know that. You’re the one who was ready and eager to do it that once without a condom.”

“Yeah, sure. James swears you tried to get him into a switch-hitters’ club.”

“He says different. He says you came on to him.”

“He’s either mistaken or lying.”

“I don’t know. Grudge thing, maybe. He didn’t like it that I went to his sister’s wedding reception. Claimed he didn’t invite me, but that’s a lie, too.”

Vonda’s ex-gangbanger brother James was a lot of things, including a racist, but he wasn’t a liar. And the only grudges he’d ever held were against other gangbangers and white folks.

“Yeah, too bad for both of us if my test comes back positive.”

“It better not. Or I’ll damn quick report you to the Department of Health.”

“So I guess this means you don’t want to see me anymore.” Real casual, as if he’d said it through a yawn.

“You better believe it. Sex was all we had, and no way I let you dip your dumbstick in me again.”

His creepy mother was listening. Tamara heard Mama say something in her deep, scratchy old voice but couldn’t make out the words.

Talking to Mama. Then, to Tamara, “How’d you get this number?”

“What? What do you care how I got it? I run a detective agency, remember?”

“Oh, I remember. My bad. I shouldn’t have taken the chance with you.”

“What the hell does that mean?”

“Good-bye, Tamara,” he said. And he banged the receiver in her ear before she could do the same to him.

Made her skin burn hot, remembering.

When she told Vonda about the test results, she got the advice she expected: let it end right there. Good advice, too—for most women. You dodge a bullet, the smart thing is to chalk it up to experience and get on with your life. Only she wasn’t made that way. He’d used her, scared her, made her feel bad about herself just when she’d been starting to get her stuff together again; she was entitled to one last shot at him.

She called Mama’s number again, and this time it was no longer in service. That didn’t stop her. She knew where Lucas worked and she had his home address, or thought she did, because back when they first hooked up she’d run a superficial background check on him, out of curiosity and because he’d said some things that made her wonder if maybe it wasn’t his mother he lived with but a wife. Tamara probably wouldn’t have done it if their relationship had been the kind that might turn serious, the kind built on caring and trust, but they’d both made it plain from the get-go that their only interest in each other was what went on between the sheets.

The b.g. check had reassured her . . . then. Lucas Zeller had a clean record. Squeaky clean, in fact. Thirty-four, unmarried,
worked as a salesman for an electronics company in the East Bay, lived here in the city, had never been arrested or in trouble of any kind. The only mark against him, or so she’d thought then, was that he was a mama’s boy.

So if she couldn’t get him on the phone, then she’d confront him in person. Company he worked for was Dale Electronics in El Cerrito. He’d told her he spent a lot of his time on the road, but he happened to be in his office the day she went over there. She expected to have some trouble getting in to see him, but that didn’t happen. She just walked right in.

She’d never seen the man at the desk before.

Superficial resemblance, nothing more. Dark skinned, where her man had been light skinned and claimed to have white blood—a fudge swirl. Round head instead of blocky, straight nose instead of hooked, all his hair instead of a receding hairline, and a smaller, neater mustache.

He looked at her business card, looked at her, flashed a thin, hopeful smile, and said, “Are you here about the theft?”

“My wallet and briefcase. A month ago.”

That put an end to her surprise. Tight-mouthed, she asked him where the theft had happened.

“Bertolini’s, in the city. That’s not why you’re here?”

“Damn. I keep hoping at least the briefcase will turn up. I had some important papers in there.”

“No. I was there for drinks after work with some business associates . . . they didn’t see anything, either. Must have
happened while I was in the bathroom. I didn’t even miss it until we were ready to leave.” Heavy sigh. “I should’ve watched it more carefully. My wallet was in there, too.” He added ruefully, “I thought it’d be safer than in my coat pocket.”

“There wasn’t much in the wallet. But the thief made two ATM withdrawals from my checking account before I could close it. Six hundred dollars.” He sighed again. “I had my PIN number in the wallet, too, because I keep forgetting it.”

“No, thank God. I got them all canceled in time.”

Tamara gave him a detailed description of the phony Lucas. “You know that man, Mr. Zeller?”

“See anybody looks like him the night your briefcase was stolen?”

“Probably. He’s the man I’m looking for, not you.”

“He’s been posing as you, using your name.”

“Keep his own identity secret. Some other reason, too, maybe.”

“You report the theft to the police?”

“Then you don’t need to worry. He’d expect you to, and he knows you closed your bank account and canceled your credit cards. All he’s doing is using is your name, and maybe your
driver’s license if he needs to show ID. He looks enough like you to pass.”

“Should I report this to the police, too?”

“You can, but there’s nothing they can do until he’s ID’d.”

“Then you don’t have any idea who he is?”

Now she was
really
pissed. The phony Lucas was a property and identity thief in addition to being a slick, lying, manipulative switch-hitter. And what else? Scam artist, using the real Lucas Zeller’s name to run a con of some sort? Wouldn’t surprise her. Small-time grifter in any case, the kind that was always on the hustle, always looking for a quick and easy score. Big-time scammers wouldn’t risk swiping a briefcase and six hundred bucks from ATM machines.