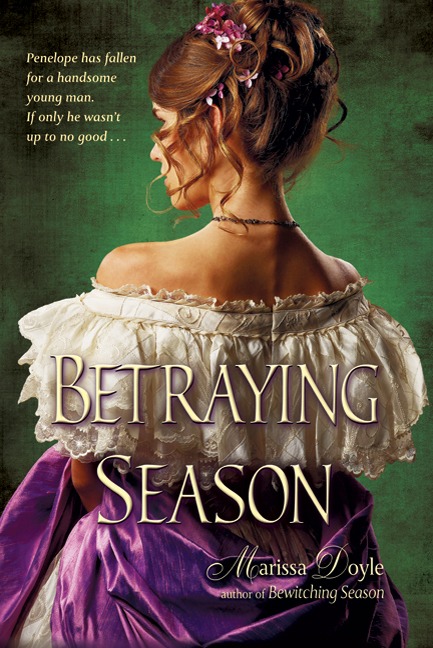 Henry Holt
®
is a registered trademark of Henry Holt and Company, LLC.

Distributed in Canada by H. B. Fenn and Company Ltd.

Summary: In 1838, Penelope Leland goes to Ireland to study magic and prove to herself that she is as good a witch as her twin sister Persy, but when Niall Keating begins to pay her court, she cannot help being distracted.

Printed in the United States of America on acid-free paper.∞

For Kate and Robin, and for Véronique, Jennifer, Tim, Sean, and everyone at Henry Holt Books for Young Readers, with my deepest thanks for your insight, guidance, talent, tact, and, most of all, your unswerving enthusiasm and support: How did I get so lucky?

For N and K and C, the most splendiferously, awesomely wonderful young adults on the planet

And always, for Scott

The shocked cry and a wild jangle of harness yanked Pen Leland from her reverie. She gasped and looked up . . . and up. Two handsome gray carriage horses loomed, snorting and jerking as they stopped bare inches from her in the center of the cobbled street. One rolled its eyes and whinnied directly in her left ear.

She squeaked in alarm and leapt backward . . . into a puddle that immediately saturated her new blue kid boots.

“I’m
so
sorry. I should pay more attention when crossing the street, shouldn’t I?” she panted to the driver of the gleaming maroon closed carriage when he had soothed his horses into silence. Poor man, he looked as shocked as she felt.

“Jesus, Mary, and Joseph, I’ll say ye should!” The silver-haired coachman crossed himself as he spoke, then pulled a red handkerchief from his coat and mopped his brow with it. “What were ye thinkin’ there, you shatter-witted—oh, pardon me.” Pen saw his
expression change as he took in the fashionable cut and material of her cloak and bonnet. “Are ye all right then, miss? I didn’t mean—”

“No, it was my fault,” Pen apologized again as she gingerly stepped out of the puddle. Something felt unpleasantly wet and heavy around her ankles. Had the hem of her mantle gotten soaked as well as her boots? Drat! Ally would be cross if she’d ruined them already.

Pen’s former governess hadn’t liked the thought of her running out to the apothecary without escort, but she herself was in no condition to stir from her bed. And besides, it wasn’t as if this were London, where well-born young ladies did not go out unattended. But still, getting herself run down by a carriage her first week in Ireland wasn’t good form. Ally might decide she couldn’t go out alone here too, which would be simply horripilatious.

“Are your horses all right?” she continued.

A small knot of passersby had gathered on the pavement behind her, necks craning. When they saw that there was no dying victim or bloody corpse, they dispersed, looking mildly disappointed.

“Padraic, what was that? Why have we stopped?” called a woman’s voice, sharp and imperious, from the carriage’s open shutter.

“I’m sorry, yer ladyship. ’Twas a bit of a near thing with this young lady, but no harm’s done.” The coachman still looked white and scared, but Pen’s concern for his horses seemed to have calmed his anger.

“Who?” The carriage door opened and a woman looked out. “Padraic, you must be more careful!”

“It wasn’t his fault, ma’am. I stepped out into the street without looking.” Pen bowed slightly to the woman and got an impression of quiet opulence from her maroon shot-silk mantle, which matched
the color of the coach itself so exactly that Pen found herself wondering if she had given paint samples to her modiste. Her hat, in the new smaller, rounder shape, was as fashionable as Pen’s.

“By Danu’s veil! I don’t care if you want to destroy yourself, girl, but you might have chosen someone else’s carriage to throw yourself und—” The woman stopped abruptly as she met Pen’s eyes.

Pen had plastered her face with a contrite smile, the one she’d always used on Ally back in the schoolroom when she hadn’t finished her lessons for the day. But she felt it fade under the woman’s fierce scrutiny.

Her slanting eyes were a piercing pale green, like sea ice, arresting but so cold that Pen felt goose bumps rise on the back of her neck. The rest of her face was striking too, with aristocratic features that skated the slender line between elegance and boniness. Only fine creases at the corners of her mouth and eyes indicated age in her otherwise flawless complexion. It was a beautiful face, and a forbidding one. Pen took an involuntary step backward—into the puddle again, unfortunately—as a cloud of perfume wafted over her like a breeze, musky, with hints of clove and spice.

“I do beg your pardon—” she tried to say through a suddenly dry mouth. But as soon as she spoke, the woman’s face changed. All at once the frosty eyes glowed warm and the thin lips curved into a kindly smile.

“Why, you poor child! I’m grateful you weren’t injured. Are you sure you’re all right?” The woman actually climbed out of the carriage and, taking Pen’s hand, surveyed her carefully.

“No, really, I’m fine. I’m sorry to have bothered you.” Pen stood still in surprise as the woman reached out to adjust her bonnet. It was an unexpectedly intimate gesture from a stranger, especially
one who had, seconds before, been looking at her as if she were a toad swimming in her teacup.

“You’re white as a ghost. Please, let me drive you home. What if you should grow faint from your shock?” She tugged gently on Pen’s hand.

“Oh, you don’t have to do that. . . .” Pen trailed off. The woman’s gaze pinned her, making her feel like a gaffed salmon waiting for the fisherman’s net.

“No, I insist. I am sure it will rain again any minute now.” The woman gestured to the small, heavily freckled boy who rode with the coachman and who had watched the proceedings with open mouth. He leapt down from his perch and held the door open, staring expectantly at Pen.

“Where can I take you, my dear?” the woman asked.

Pen gave herself a mental shake. Though a brisk walk to clear her head would have been nice right now, not to mention giving her skirts and boots a chance to drip dry, she couldn’t refuse the legendary Irish kindness to strangers without being rude. Netted fish? Her imagination had been far too active lately. “To the Reverend Doctor Carrighar’s house in Upper Ogham Street, thank you.”

“Yes, of course.” The woman nodded as if she had known what address Pen would give and gestured her into the carriage. “Padraic?”

Pen started to settle on the back-facing seat, but the woman motioned her to sit facing front, then seated herself opposite.

“Here I am, carrying you off in my carriage without introducing myself. I am Lady Keating, my dear. And you must be a visitor to
Cork.” She leaned toward Pen and gave her a gracious, toothy smile. Only her teeth belied the perfection of the rest of her; they were unpleasantly large and yellow in that delicate face.

“I’m Penelope Leland, ma’am. I’m visiting Ireland with my former governess.” Pen wasn’t sure whether she cared for Lady Keating’s scent, overwhelming in the closed carriage; it was complex and exotic, and somehow disturbing. “She is married to Dr. Carrighar’s son.”

“How interesting. Yes, I am acquainted with the Carrighars. Which son?”

“The younger son. Michael.” Pen was surprised for a moment. Were the Carrighars that well known in Cork?

Pen answered her unspoken question. “My father is Viscount Atherston. We live at Mage’s Tutterow, in Hampshire.”

Lady Keating’s smile flashed. “What a charming name! I have not been in Hampshire for many years. In fact, I’ve not been to England since my son left Oxford. Too busy here at home, alas. Are you enjoying your stay?”

Pen hesitated. How should she answer? Yes, because the country and the city alike were achingly beautiful and the people a delight? Or no, because her twin sister, Persy—Persephone, really—was back at home, happily married after her first season, and not here to giggle and talk and share everything with?

“It is quite—” she began, but Lady Keating stopped her.

“I am detecting a bit of homesickness, aren’t I? Well, we must find some new friends to distract you. Come and take tea with me tomorrow, my dear. You shall tell me about your home and what
you are learning here with your governess. Are you still in the schoolroom? I should have thought that a handsome young lady like yourself was past lessons.”

“I had my first season in London last spring, ma’am. But I wanted to continue my studies, and my family agreed that I should accompany my former governess to Ireland for a visit.”

“In London?” Lady Keating sat up straighter. “When were you presented?”

“In April, to Queen Adelaide. And again in July, at Vic—at
Queen
Victoria’s first Drawing Room.” Pen couldn’t keep the warmth from her voice. But it wouldn’t do to boast of their friendship. The order the queen had created, DASH—Dames at Service to Her Majesty—to reward Pen and Persy for saving her from an evil enchantment, was a secret. And besides, Persy was the one who had really saved Victoria. Pen still felt she didn’t deserve to wear the little jeweled figure of a spaniel with a star at the end of its tail that they had designed as DASH’s emblem, now tucked away in her handkerchief box.

High Spirits [Spirits 03] by Alice Duncan
Blame It on the Rodeo by Amanda Renee
Blood Flag: A Paul Madriani Novel by Steve Martini
Accidental Love by BL Miller
King (Grit Chapter Book 2) by Jenika Snow, Sam Crescent
The Whites of their Eyes by Matt Braun
Dream a Little Dream (The Silver Trilogy) (F) by Kerstin Gier
Hot Christmas Nights by Farrah Rochon
The General of the Dead Army by Ismail Kadare, Derek Coltman
Only Ever Yours by Louise O'Neill
Our partner