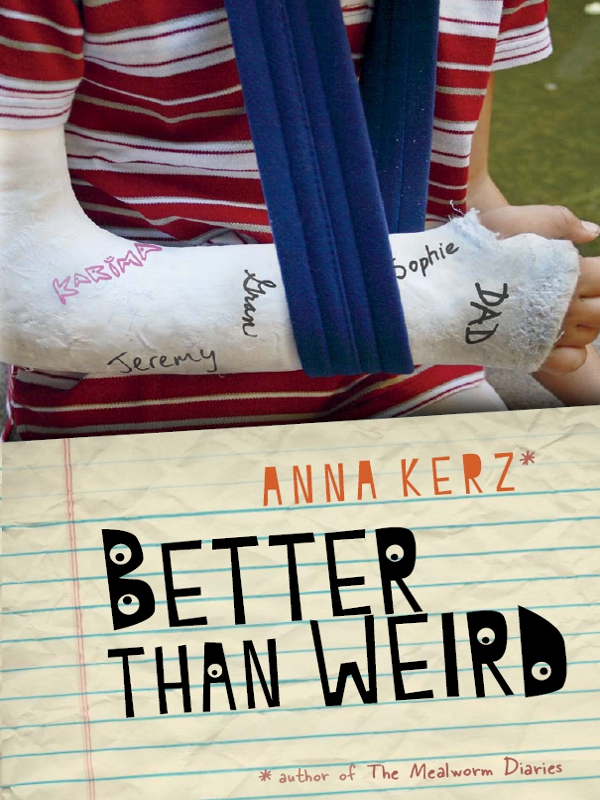 Summary:
When Aaron's long-absent father returns, Aaron must cope with bullying at school, his grandmother's illness and his father's pregnant new wife.
Better Than Weird
is a stand-alone sequel to
The Mealworm Diaries
.

Orca Book Publishers is dedicated to preserving the environment and has printed this
book on paper certified by the Forest Stewardship Council.

Orca Book Publishers gratefully acknowledges the support for its publishing
programs provided by the following agencies: the Government of Canada
through the Canada Book Fund and the Canada Council for the Arts,
and the Province of British Columbia through the BC Arts Council
and the Book Publishing Tax Credit.

To Katie and Alex, who love stories and listen well

“Aaron!” Gran called from downstairs. “Are you up, Aaron?”

“Okay! Okay! I'm up.” He flopped over and lay spread-eagled in his bed.

Sighing, Aaron patted his night table for his glasses and put them on before he rolled out of bed and stumbled out of the room. He was standing in front of the toilet when his grandmother called for the fourth time. “For goodness sake, Aaron! Close the door.”

Aaron flushed, watching the water swirl before it swooshed away. He flushed a second time just to see the water spin. He would have flushed again, but a creak on the stairs warned him that Gran was on her way up. He closed the door.

Aaron was pulling an arm out of his pajama sleeve when he noticed a tuft of hair sticking up on one side of his head.
It looks like a chimney
, he thought.
I have a
chimney growing out of my head
. He chuckled and raked his fingers through the unruly tuft. The hair separated and flattened, then bounced back. He patted it gingerly with the palm of his hand. It would be funny if it stood up like that all day.

He was still chuckling when Gran said, “Aaron! Get in the showerânow!”

He stepped out of his pajama pants, climbed into the tub and closed the curtain. When the water ran warm, he pulled up the little toggle that made it pour from the showerhead. Then he stood, eyes closed, to let it pulse against his forehead.
Sounds like rain,
he thought. He began to sing tunelessly: “Rain, rain, go away. Come again another day.”

He stopped, his head filled with thoughts of rain. “Not the day my dad comes home,” he said out loud. “Don't come then.”

“I'll be there before the end of November,” his dad had said when he phoned. “And I'll bring a surprise.”

Tipping his head back, Aaron opened his mouth and let the spray fill it. Then he spouted, sending a stream of water arching to the tiled wall. He laughed, then turned and let the spray thrum against the back of his head.

He could think of lots of things his father might bring for himâ¦but for him
and
Gran? What could that be? What?

He turned again, face into the spray, until Gran called, “Aaron! Get moving!”

Gran was at the top of the stairs when he hurried past, a towel wrapped around his middle, his hair and body shedding water like rain. “I don't suppose you remembered to use soap this morning?” she said.

He grunted, jumped into his room and closed the door with his hip.

“Put on the clothes I laid out on your bed,” she called as she started back down. “The stuff you wore yesterday is filthy. Put it in the laundry hamper.”

He was almost dressed when he saw his underwear still neatly folded on the bed. “Oops! Forgot,” he said. He wadded it up, intending to throw it into the hamper with yesterday's clothes. His arm went back for the toss, then stopped. Could he go to school without underwear? If Tufan knew, he'd say,
You're weird.

Aaron heard the words so clearly, he glanced around in case Tufan had magically appeared in his bedroom. He was relieved to find himself alone. But in his head, Tufan's voice kept taunting.
Weird. Weird.
Weird
.

“Am not,” Aaron snapped. Hearing his own voice in the empty room made him feel silly. “I'm talking to myself,” he said. Then he groaned, remembering something Tufan really
had
said: “His dad's gonna take one look and disappear all over again.”

“Is not!” Aaron had shouted back. “He's coming back to stay! He said! He said!” But the words were a lie. His father had said he was coming, but he'd never once said he would stay.

I'll be good,
Aaron thought.
I'll be so good he'll want
to stay.

He sighed. He knew how hard that would be. For one thing, he knew he talked too much. That's what everybody said. That's why they called him Aaron Cantwait.

“I'm not weird, just different,” he muttered, repeating something Gran told him. “We can't all be the same,” she often said. “You're just a little different.”

Better than weird,
he thought. Even so, he didn't want to be so different that his dad would come home after eight years away and then leave again.

With a little huff of frustration, he pulled off his pants and put on the underwear. Just in case.

He had his hand on the knob, ready to leave, when he saw the calendar tacked to his door. There were large red
X
s marked through all the days of November so far. He reached for the red marker on his bedside table and drew a new
X
through the box for November 16, then counted to the 28th. Twelve. His dad was coming home in twelve days. Twelve. Everything would be different once his dad was back. Everything.

Taped up beside the calendar were two lists. That's what his Big Brother, Paul, had told him to do. “If you want to organize your life, make a list,” Paul had said. Aaron had listened.

Paul was different too. But he was cool different. Paul had two rings pierced into his right eyebrow. He had a tongue stud, and he was talking about getting a tattoo. Paul knew stuff. He was in high school. If he said lists were good, Aaron was willing to make lists.

Things Dad will teach me

5. how to kick a soccer ball

6. how to play the guitar

Things to do with Dad

3. visit the dinosaur exhibit at the museum

4. eat popcorn and watch all the Star Wars movies

“Oh, Aaron,” Gran said the first time she saw his lists. “You're expecting too much. Your dadâ¦I'm not sure he'll be able toâ¦” She stopped, then went on in a rush. “For sure he can't teach you to play the guitar. He doesn't know how to play himself.”

“Okay,” Aaron said. He drew a line through the last entry on the first list and added
6. learn to play the guitar
to the second list.

Aaron counted the empty boxes on the calendar one more time, just to make sure. There were still twelve. He reached for the door.

“Oops!” he said. “Almost forgot.” Turning back, he dropped to his belly and wriggled under his bed.

On the floor under the head of his bed was a cardboard box filled with dirt, home to his pet toad. “How you doin', Buddy?” Aaron asked as he looked into the box. “You okay?”

The toad, half-buried, stared back.

Aaron stroked the creature's head. The eyes closed. “You like that?” He stroked Buddy's head again.

Keeping a pet toad wasn't easy now that winter was coming, and keeping it a secret from Gran was even harder. He had been feeding it worms and bugs from the garden. Now bugs were getting hard to find. Luckily, he could still dig worms out of the compost bin. He just had to be careful to dig when Gran wasn't looking.

“I'll bring you some worms after school,” he said as he slipped the box back into place and backed out from under the bed. He scrambled to his feet and headed downstairs.