Read Between Dark and Light Online

Between Dark and Light Lands of the Brotherhood of Dwarves 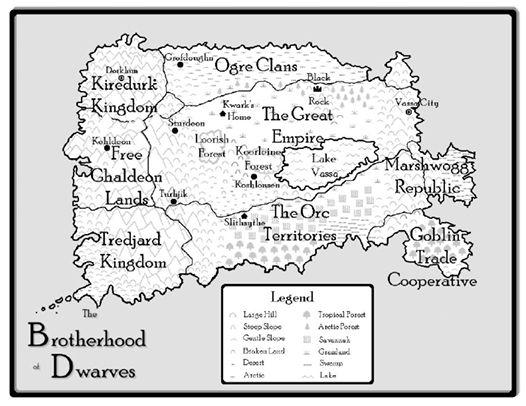 Also Available in the Brotherhood of Dwarves Series:

Book One: The Brotherhood of Dwarves

Book Three: The Fall of Dorkhun

the Brotherhood of Dwarves Series

Between Dark and Light

All rights reserved. No portion of this book may be copied or transmitted in any form, electronic or otherwise, without express written consent of the publisher or author.

Between Dark and Light is a work of fiction. All names, characters, and places are the product of the author’s imagination, used in fictitious manner. Any resemblances to actual persons, places, locales, events, etc. are purely coincidental.

For Aunt Carolyn, my biggest fan…

…And for Collin and Finn, my greatest gift.

The wind shifted from the north, carrying the stench of fear, and Crushaw smiled. He sniffed the air, breathing in the ogres’ dread as they trembled behind ramshackle fortifications. For as long as he could remember, he had waged war on them, killing more than he could count and driving them farther north with each year. His name a curse on their lips, his silhouette a vision of terror. Today, he would smash their lines and extinguish their last glimmer of hope.

Ominous clouds formed along the southern horizon, tall and billowy and dark. He studied them while waiting for his runner to return with news about his latest peace offer. The ogres would reject it, of course, for the offer was little more than an insult. Unknown to them, however, his archers were moving into position on the ogres’ weakened eastern flank. He turned to his captain and pointed at the clouds.

“No. A little rain’ll wash off their blood.”

Strauteefe laughed but continued staring at the gathering storm. Crushaw turned his gaze north, searching for his runner. The captain was his favorite officer, the one being groomed as his replacement, but sometimes, Strauteefe’s cautiousness worried the general. The ogres were all but shattered, and any delay would afford them an opportunity to regroup. All his experience told him, storm or not, they would strike as soon as the archers moved into position. If the runner were lucky, he would be back by then.

Crushaw bolted upright, sweat pouring from his body. Whenever the nightmare started, he forced himself awake, and now, he peered out the window, trying to shake off lingering memories. From the other room, Vishghu’s snoring was loud and steady, a deep slumber from yesterday’s labor. The heat of summer had taken its toll on them, but he couldn’t sleep for fear of the recurring dream, so he rose from bed and went outside.

The grass lay damp with dew, and dawn was still hours away, so he walked to the barn and found the driest section of a bench that ran along the outer wall. Sitting, he looked west and wondered if Roskin was okay. Kwarck had said little since the earthquake a week before, save the occasional reassurances of the dwarf’s safety. But Crushaw wished he could see for himself that his friend was uninjured, for in his heart, he knew Kwarck was hiding something.

As he mulled the thought, the wizard emerged from the house and came towards him. Crushaw waved in the faint light, but Kwarck didn’t acknowledge him. Instead, he strode straight to the bench and sat at the far end. The wood creaked from the additional weight, and Crushaw readjusted himself to get comfortable. Kwarck’s eyes remained fixed on the ground, so Crushaw stretched out his legs and folded his hands in his lap. After several moments of uncomfortable silence, the general spoke:

“At least Vishghu’ll be rested.”

“You’ve been honest with me, haven’t you?”

“About?” Crushaw asked, arching an eyebrow.

“Your past? Your secrets?”

“I’m sure some things I haven’t shared.”

“Yes, but you’ve been a better friend than I.”

“I’ve kept a secret for too long.”

“Before I lived here, I served the Great Empire as a healer in the capital.”

“No, her father and grandfather.”

Crushaw calculated, furrowing his brow. “That would make you well over a hundred.”

“Like I told you before, I’m much older than that,” Kwarck answered, still not looking up. “It’s the elf in me.”

“I knew many elves on the plantation. None were much older than humans and dwarves.”

“The labor broke their bodies young. No living creature can endure endless toil for long. Had you not escaped, you too would be gone by now.”

Crushaw remembered how the old slaves looked--their backs bent, hands gnarled, and joints swollen, yet none were much above fifty. Their eyes had no glimmer of life, just a dimness that gazed far into the distance, and he rarely dwelled on such memories, for they brought too much grief.

“That’s not the secret, though,” Kwarck added.

“I knew your parents.”

“What?” the old general asked, suddenly erect, gripping his knees.

Kwarck explained that Crushaw’s father had been a member of the Royal Guard and his mother the emperor’s niece. They had fallen in love and dated secretly until she became pregnant. However, the emperor didn’t approve of them marrying because, while Crushaw’s father was an exemplary soldier, he was still a commoner. The war with the elves had just begun, and the young man had been sent to the front, where he died in the Loorish Forest during a vicious battle. The emperor had ordered Kwarck to destroy the baby as soon as it was born.

“I couldn’t obey that order. I’m a healer, not a murderer.”

Crushaw struggled to comprehend the tale.

“I gave you to my two most trusted servants, half-elves like me, and sent you to live in the Koorleine Forest. But somewhere along the road, they were captured by slave traders.”

“I knew the instant I saw you. You look just like your father.”

Crushaw clenched his teeth, a sharp pain burning his stomach.

“You were supposed to have a much different life, and all of your torments are my fault.”

“What about my mother?”

“She died from grief a few days after you were taken from her arms.”

Crushaw rose and walked to the nearest field. Many times he had imagined who his mother was. Now, here was Kwarck, one of the only people Crushaw had ever trusted, saying he had known her. A maelstrom of emotions, all foreign, swept through him. For a moment, Crushaw thought he was still dreaming, but the dew moistening his pant legs told him this was no dream. He returned to the bench and stood before the wizard.

“How did you survive?”

“I left the capital the night you were born and headed west. Tolerance for half-elves was growing thin already, and if the emperor found out I didn’t kill you, I would’ve been executed. That’s how I came to this land and built this farm.”

“I still don’t understand why you are telling me this. Why
now
?”

Warrior Chronicles 2: Warrior's Blood by Shawn Jones
Gymnastics Mystery by Gertrude Chandler Warner
Jewel of Persia by White, Roseanna M.
That Infamous Pearl by Alicia Quigley
Spirited Ride by Rebecca Avery
Just as Long as We're Together by Judy Blume
Bear by Ellen Miles
Moonlight Calls (Demon's Call Series Book 1) by Draper, Kaye
Mine To Have (Mine - Romantic Suspense Book 5) by Cynthia Eden
Everything He Desires by Thalia Frost
Our partner