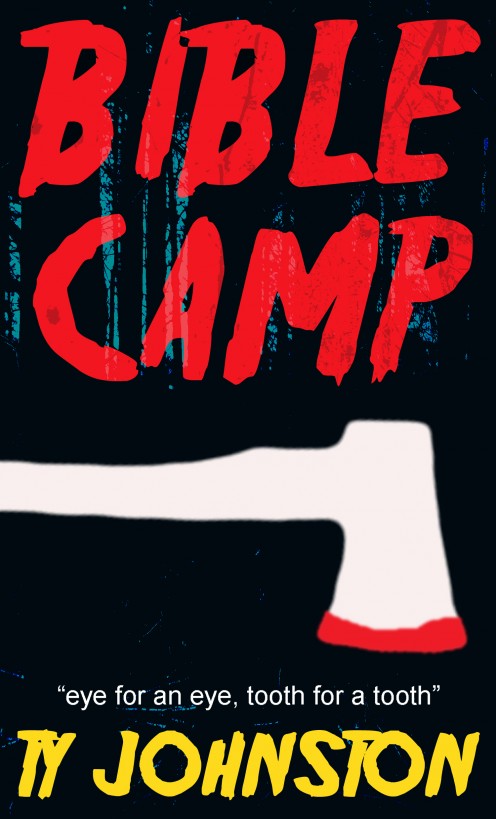 When a group of young people are sent by
their church to clean up an old bible camp in the mountains, none
of them knows the secrets of the tragedy that happened there
decades earlier. Meeting with the camp’s caretaker, they soon learn
some of the tale, but it’s only when night falls and death strikes
that they discover true pain and terror.

As they are slain one by one, those left
struggle to survive, racing through the camp and the woods while
searching for safety.

But when axes fall, throats are cut and heads
removed, can any hope to live through the night?

This is the first story in the “Bible Camp”
series of horror tales.

a short story of horror

This e-book is licensed for your personal
enjoyment only. This e-book may not be re-sold or given away to
other people. If you would like to share this book with another
person, please purchase an additional copy for each person you
share it with. If you’re reading this book and did not purchase it,
or it was not purchased for your use only, then you should return
to Smashwords.com and purchase your own copy. Thank you for
respecting the hard work of this author.

Yanking open the glove department box,
Ken tossed his phone inside before slamming the little door closed.
“This place sucks!”

Taking her eyes off the gravel road in
front of them, Mary glanced in his direction. “What’s
wrong?”

“
No cell reception,” he said, glaring
out the window to the thick forest flowing up and down hills on
either side of them. “And we’re in the middle of nowhere. I
should’ve known better than to let you drag me up here.”

“
It’s for a good cause,” Mary said
with a frown, looking ahead once more. “The pastor wants this place
cleaned up before they bring the kids here next month.”

Ken grunted. “Yeah, whatever. The only
reason I’m here is because you begged me, and because I’ll be
graduating soon.”

Mary’s eyes misted. “I thought you
came because you loved me.”

Rolling his eyes, Ken looked over at
his girlfriend. “I’m going to need a job, aren’t I, at least until
you graduate next year? One of the deacons is boss at an investment
firm. Anything I can do to look good in his eyes will be worth
it.”

Steering around a hole in the middle
of the road, Mary reached up and brushed away her tears. “I thought
you cared for me.”

Ken sat there in silence for a few
moments, staring at her with a look of disgust on his face. Then he
reached over and petted a shoulder. “You know I do, babe. I just
get caught up in all this stuff.”

She forced a smile and glanced at him
again. “It’ll be better once we reach the camp, I
promise.”

“
I hope so,” he said. “The others
shouldn’t be too far behind. If this place is like you said, maybe
we can get in some swim time before they show up.”

“
Maybe, but we’ve got a lot to do.
I’ll have to check in with the groundskeeper or caretaker or
whatever he is.”

“
Well, if there’s a caretaker up
there, we shouldn’t have much to do, now should we?”

Mary ignored the question as they came
to a bend in the road. She slowed and kept her attention straight
ahead.

Rounding the bend, the woods opened up
ahead of them and the road ended in a circular gravel driveway. A
rotting wooden sign on the right of the road proclaimed they were
entering “Jacob’s Bible Camp.”

“
Place looks like a dump,” Ken said as
they came to a park at the far end of the gravel lot.

Directly ahead of them stretched a
path of packed earth with bushes and tall oaks close up against
either side. Beyond in the distance could be glimpsed the blues and
silvers of flat water glinting beneath the sun.

Putting the Explorer into park and
turning off the ignition, Mary looked all around. “I don’t know. It
doesn’t look that bad to me.”

Ken groaned his disapproval and added
more rolling eyes as he climbed from the vehicle and slowly looked
in all directions. To their right was the first of several cabins
made of concrete blocks, in the back of the building another such
structure and so on and so on. From what Ken could see, there were
at least five of the buildings, each big enough to house at least a
dozen people. To their left stood a single log building, one story
but long with a flat roof. A sign on the entrance door told this
was the office for the camp’s counselors.

All of the buildings looked old and
worn, but they appeared to be in working condition. They also
appeared to be lonely, as if not inhabited in years, a sensation
added to by the eerie silence that echoed throughout the
place.

“
I thought you said there was a
caretaker,” Ken said as Mary exited the vehicle and pocketed the
keys.

She pointed off to the left of the
counselors’ building where a small trail snaked back into the
woods. “It should be over there. At least that’s what I
remember.”

“
You grew up around here, right?” He
didn’t look happy to have a girlfriend from the sticks.

Mary smiled and nodded. “The next
county over. We came here a few times when I was kid. Just to fish
and swim, though. We never stayed the night. I don’t think anybody
did.”

She shook her head. “I’m not sure. I
think there was some kind of accident a long time ago, back before
I was born.”

Ken opened his mouth to grouse some
more, but a honking horn caught their attention and they turned to
face the gravel road they had just driven up.

Bouncing along the road and
approaching them was an old, rusted Jeep. Several figures could be
seen crouched behind the windshield, but another blowing of the
horn showed the driver and passengers were friendly.

Mary laughed and rushed forward as the
Jeep came to a halt next to the Explorer.

The Jeep died and doors popped open,
spewing forth four more people in their early twenties.

“
Idiot here almost got us lost,” said
a girl with short, dark hair and a darker demeanor. She jabbed a
thumb towards a tall, skinny guy with a mop of brown, curly hair
atop his head.

“
Hey, I knew where we were all along,”
he said with a chuckle.

From around the other side of the Jeep
lumbered a portly youth sporting freckles, curly red hair and a
Superman T-shirt.

He laughed as he came up to Lance.
“Abby can be a real bitch sometimes, can’t she?”

“
Screw you, fat boy,” the dark-haired
girl said, flipping both of them the finger.

Mary didn’t look pleased with the
conversation, but Lance couldn’t help but laugh.

Another young woman climbed out of the
back of the Jeep, cursing as her hiking boots hit the
ground.

“
What’s up with you, beautiful?” Ken
asked.

Again, Mary did not look happy,
especially with her boyfriend so boldly complimenting another
woman. Yet there was little doubt the last one of out the vehicle
was the most attractive of the girls.

Gloria stood straight and stretched
her arms over her head as if she had just woke, shaking her long,
blonde hair out. Then she looked around and cursed
again.

Gloria turned on him. “No phones, not
even a gas station for miles. I bet the nearest Starbuck’s is at
least an hour away.”

“
Hell, I bet the nearest house is an
hour away,” Lance joked.

“
It’s just a few miles to the nearest
farm,” Mary said, coming to stand in the middle of the pack while
defending what she felt was her home region.

“
I don’t even see any old TV
antennas,” Russ said, shielding his eyes from the sun as he glanced
at their surroundings, “not that they’d do us any good.”

“
Hey!” Mary stamped a tennis shoe on
the gravel. “We didn’t come up here for fun and games, you guys.
We’re supposed to be helping the church.”

“
Church, shmurch,” Abby said, yawning
beneath black eyeliner as if bored. “I came up here to get away for
a few days, nothing more. Brought a good book with me. That’s all
I’ll need.”

Russ lightened up, his jaws dancing.
“And I brought some comic books!”

A moan rolled through the rest of the
group, other than Abby, who gave a glance to the big
guy.

Once more Russ’s face light up. “I’ve
got the Hulk and the Fantastic Four and Spawn and --”

“
Okay, that’s enough.” Ken waved off
the list of comic book heroes with a look of distaste. “Like Mary
said, we’ve got work to do. The sooner we get to it, the sooner we
can have some playtime.”

“
I’m telling you, I’m not doing any
work,” Abby said, reaching through an open window into the Jeep to
withdraw a hefty paperback. “It’s just me and Stephen King this
weekend.”

“
But we’re all supposed to help,” Mary
said.

Abby ignored the words and moved away
from her friends, looking around for someplace to sit in the cool
shade. Spotting an old tree stump beneath hanging branches, she
marched off in that direction, her nose already deep into the
horror novel.

Mary cried out in frustration and
moved to go after the other girl, but Ken stopped her with a hand
on an arm.

“
Let her go,” he said. “She doesn’t
want to work, she doesn’t want to work. She’d just complain the
whole time. It’ll be easier on us if we go on without
her.”

“
Well, I don’t want to help either, if
she’s not,” Gloria said, her bottom lip stick out, her eyes
appearing cold.

Lance couldn’t help but laugh some
more. “Oh, what the hell. I’ll lend a hand. Maybe the two ladies
will realize they’re not too good to help.”

“
I heard that!” Abby shouted from her
perch, her nose still in her book.

“
And I don’t think I’m too good,”
Gloria said, looking wounded, “but it’s not far if everyone isn’t
going to help.”

Letting out a heavy sigh, Ken pointed
Russ and Lance towards the nearest of the cabins.

“
All this is getting us nowhere,” he
said. “You guys go check out the cabins while Mary and I go see
this caretaker.”

“
Won’t they be locked?” Russ asked,
nodding to the cabins.

“
Not much for us to look at if we
can’t go inside,” Lance said.

Groaning his frustration, Ken jabbed a
hand at the cabins. “Would you guys just go on? I don’t know, make
sure there aren’t any snakes around the places or
something.”