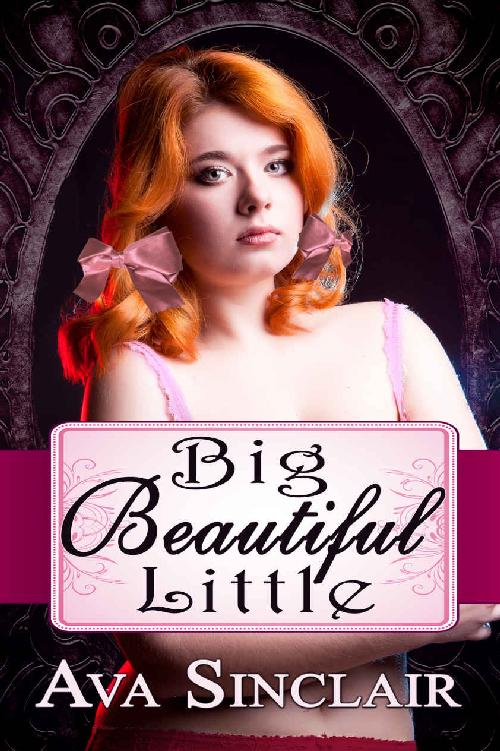 Chapter One: Adults Only

Chapter Five: Never Too Big To Be Little

This book is intended for
adults only
. Spanking and other sexual activities represented in this book are fantasies only, intended for adults.

To Jen. Thanks for being my beautiful friend.

“I hope you’re not thinking of moving.”

He was sitting in his chair, but glanced over to where his sweet little girl stood so obediently in the corner with her hands on her head. He knew it wasn’t easy and that she was getting tired. She’d sniffled loudly a couple of times, most likely on the hopes that he’d hear and take pity on her.

It had been an hour since he’d put her there. Usually she balked at corner time. But today she’d been so relieved that the punishment was over she’d scurried off on his command, sobbing all the way.

The vantage point allowed him to enjoy the view of her full bottom, the center bright red from where he’d concentrated the spanks with the wicked maple paddle. It was not unusual for him to redden her bottom. However, the six dark lines overlaying the red splotches were out of the ordinary.

Her sobs had become little hiccoughs now, and he wondered if the shock had subsided as well. He knew his little princess had not believed he’d go through with it—not believed that he’d actually use the cane.

She was usually so well behaved for her daddy. But lately she’d been acting out. He knew it was because he’d been busy with work, and that although she tried to understand, sometimes she wasn’t getting enough attention and she’d become moody, fretful. These were mildly punishable offenses, but he knew it was always necessary to rise to the occasion, even when infractions were small.

Being a father figure in a relationship like this was a privilege. It meant providing his little princess with a feeling of safety and security. It meant providing a safe place for her to sink into her deep feelings of submission. Each and every day since meeting her, he’d awoken with the knowledge that he was responsible for the needs of another adult who had put herself in his hands. He set her schedule, monitored her diet, selected her clothing, and saw to her health. He supported her physically and financially, relieving her from every care in the world.

When she was naughty, he punished her. And this was perhaps one of the most solemn and important parts of being a daddy. Baring her bottom for correction was an important ritual for his little girl; she needed to feel the pain of her daddy’s hand to assure her of his dominance, his control, his love.

Finally, he stood and walked over to where she was standing. Dropping his hand to her bottom, he palmed the mound of one welted cheek before tracing a raised cane mark with his fingers. She flinched under his touch and moaned from discomfort or need, or both.

He caught the subtle scent of the arousal that had become evident during the punishment. She’d been bent over the desk, her legs spread, as he’d brought the cane down again and again. But even as she’d cried and begged, the flower of her pussy had blossomed between the smooth outer lips, and by the end of the caning her thighs had been slick with her excitement.

“You can take your hands off your head, princess,” he said.

She complied, looking up at him with dread. “Is it over?” she asked.

“Let’s see… you hung up when I called and then pouted when I arrived here late tonight through no fault of my own.” He paused. “What do you think?”

A tear slipped down her cheek. “There’s more…”

“There certainly is, young lady.” He pointed back to the desk she’d bent over earlier for her caning. “Go.”

She hung her head as she shuffled across the room, her gait hampered by the ruffled panties that remained where he’d lowered them to just above her knees. He almost smiled as he watched her awkwardly move back to the desk. She struck the perfect image of the contrite child with the hem of her blue-checked dress and crinoline slip tucked in the back of the sash at her waist. Only the very womanly shape of her bottom and thighs belied her maturity.

He had to exercise every ounce of control it took to keep from stroking the pink pouch of her shaved pussy. He longed to sink himself into her drenched passage, to feel the slick walls clamp down on his cock, milking his seed from him.

But she needed his punishment, needed this reminder that he cared enough to sternly correct her. For his little girl, chastisement was as much an act of love as sex. So when he pulled a punishment plug from the box on a nearby table and coated it with lube, he could see both fear and longing in the eyes of the beautiful woman-child looking back at him.

“Oh, please, daddy… no… I’ll be good.” His princess was whimpering again as he moved to her side and covered one punished cheek with his broad hand.

“It’s too big!” she sobbed, but he could see that beneath her plugged bottom hole, her pussy dripped with need.

He leaned over until his mouth was just inches from her ear.

“Do you remember the first time I punished you, princess?”

“Do you remember how scared you were?” He smoothed a tear-soaked strand of hair away from her face. “How uncertain?”

“That’s right,” he said. “Because you know your daddy will always protect you, love you, and punish you when you need it, don’t you?”

“Have you learned your lesson, princess?”

She nodded again. “Yes. My bottom hurts so bad. I’ll be a good girl now.”

“Do you want daddy to make it better?”

He moved behind her and undid his blue jeans. He stroked his cock, savoring the anticipation of sinking into her pussy. When he could wait no longer, he slid into her with one hard thrust, reveling in her little cry of pleasure-pain.

His sweet princess came almost immediately, her pussy clenching tight on his cock, the seductive cushion of her bottom moving against him as she met his thrusts.

Her endearing little whimpers and moans made it all the sweeter. It was all he could do to stave off his own climax until he’d pushed her to a second one. This time, he tumbled along with her, knowing it was what she wanted. Afterwards, he looked at her lovely profile, how her mouth curved into a soft smile, how the long lashes—still tear-damp—brushed her cheeks.

He lowered himself to the desk, resting on his strong forearms, his broad chest against her back, enjoying the feel of her fullness, her softness. He loved making her feel so secure. He couldn’t imagine life without her. And to think it was her doubts that brought them together.

Chapter One: Adults Only

“Shhh… not so hard!” Tiffany reached for the loose headboard that was slamming into the wall behind the bed, giggling as she held it with one hand while grasping Nick’s strong, tattooed bicep with the other. “Mrs. Kramer next door’s going to complain again about the knocking.”

“Come on. You know you like it hard.” Nick drew back until his cock was almost all the way out before ramming into Tiffany again. She moaned.

He was right. She did like it hard, and after not seeing him for a week wasn’t about to complain, even if she could have used a little more foreplay. Nick usually started with some teasing, which she loved. He’d growl into her ear about what a bad girl she was. Sometimes he’d even spank her. This time he’d done little more than half-heartedly rub her clit before shoving into her. But he was home and that’s what mattered. He was home, they were together, and she was happy just to feel him inside of her.

“I love you, sir,” she said, wrapping her arms around him.

Nick didn’t respond. He was fucking her almost frantically, rushing it. Tiffany clung to him, searching for some closeness in these final moments. Wrapping her arms around his neck, she pulled him to her, burying her lips in his neck.

The sweet response she’d been expecting didn’t come as Nick collapsed on her with a grunt, his cock spending in rapid spurts. Tiffany looked up at the ceiling, blinking back tears. It was the second time in their four-year relationship that he’d come before she did. And both those times had been within the last month.

He rolled off her now, and she sat up, watching as he rose from the bed and went to the bathroom.

“Nick?” She pulled a sheet up around herself as she moved toward the edge of the bed.

“Is everything okay?” She pushed a strand of strawberry blond hair out of her face as she peered up at him.

The toilet flushed and he emerged from the bathroom and walked back to the bed, picking up his pants on the way. He sat down beside her and began pulling them on, avoiding her gaze. “Yeah, I’m just fine. Why?”

“You just seem different, is all…”

Tiffany nodded, telling herself he was right, that she should be more understanding. Becoming a nationwide sales supervisor for TexCan was a big step. He’d been traveling a lot from their home in San Antonio. He was tired, stressed, overwhelmed. Being apart had been hard on her, but it was probably hard on him, too.

She decided this was the perfect time for her good news.

“I think I have a new client in Fort Worth,” she said, brightening her tone. “There’s a new publisher and they’re looking for an illustrator for their children’s book series. I sent them some samples and they want to talk to me. I have an interview next Thursday. I thought maybe this time we’d go out together, look for apartments.”

His shoulders visibly tensed. He didn’t look at her, didn’t even acknowledge what she’d told him.

She stared at him. “You don’t think what is a good idea?”

“You coming to Fort Worth.”

The room was silent, the only sound coming from Mrs. Kramer’s television in the next apartment. It was 7 p.m., time for
Wheel of Fortune
. Tiffany shook her head, as if seeking to clear away the confusion over what he’d just said.

“Yeah,” he said. “We’ve been engaged for three years and I won’t let you set a date. Doesn’t that tell you something?”

She swallowed, tried to stop the shaking she felt beginning in her hands. She tried again.

“It only tells me that we’re both busy,” she replied haltingly. “Besides, we agreed to wait until it was time. Now I’m picking up more illustration work. You got that promotion you wanted. This is what we’ve been waiting for.” She forced a hopeful smile. “You even mentioned something not too long ago about getting a house together. You…”