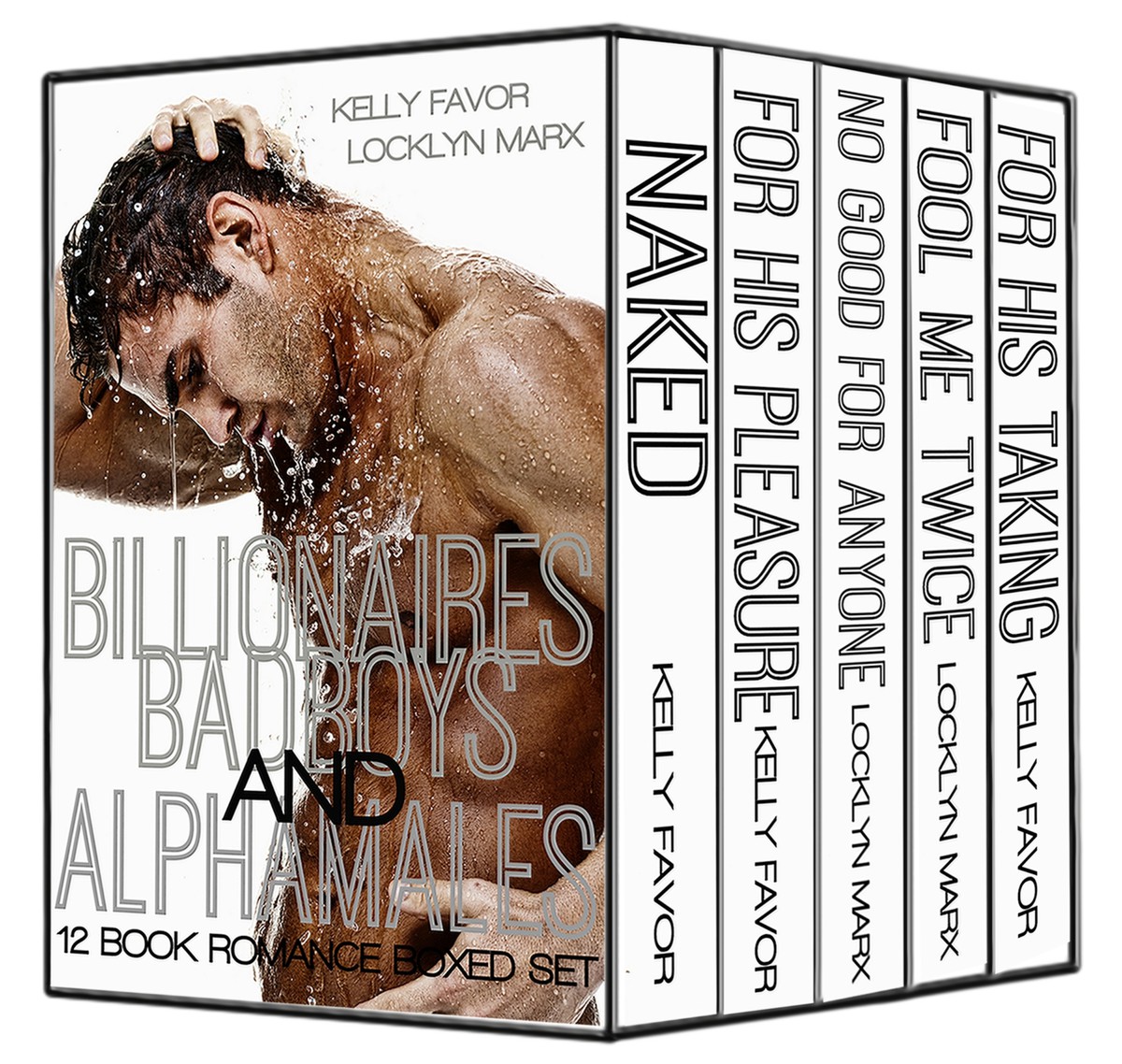 by Kelly Favor and
Locklyn Marx

This box set features an abundance of
billionaires and bad boys who bring the heat and then some, so be forewarned.

FOOL ME TWICE
BY LOCKLYN MARX

NO GOOD FOR
ANYONE
BY LOCKLYN MARX

(FOR HIS PLEASURE, BOOK 2)
BY KELLY FAVOR

FOR HIS KEEPING
(FOR HIS PLEASURE, BOOK 3)
BY KELLY FAVOR

FOR HIS HONOR (FOR
HIS PLEASURE, BOOK 4)
BY KELLY FAVOR

FOR HIS TRUST (FOR
HIS PLEASURE, BOOK 5)
BY KELLY FAVOR

FOR HIS FOREVER (FOR
HIS PLEASURE, BOOK 6)
BY KELLY FAVOR

HEAT OF THE
MOMENT (BROOKLYN HEAT, #2)
BY LOCKLYN MARX

Caelyn Murphy was in
trouble.

The car that she was
driving down I-95 at just past three in the morning was starting to make
strange noises, and the check engine light had come on, a brilliant and panicky
yellow.

“No, no, no,” she
moaned, taking her foot off the gas and trying to let the car coast a little
while before pressing the gas pedal again.

The car was shaking now, vibrating as if someone had decided to turn it
into a washer and set the cycle on “spin.”

She heard grinding
noises, too—and couldn’t imagine any way those noises could be just a
passing thing.

Something had gone
very, very wrong.

Caelyn wasn’t big on
praying, but she started to pray now.

She wiped her blonde hair away from her face, glancing at herself in the
rearview mirror and being met by a pair of wide, frightened blue eyes and a
pale complexion.

There was nobody else
on the road—she hadn’t seen a car in probably half an hour, when she’d
passed the Charlton Plaza some miles back.

There had been a few trucks and a couple of other lonely drivers then,
but afterwards it was just her on this dark and lonely highway, her headlights
sweeping out in front of her car as she tried desperately to outrun the pain
and fear of what had happened to her just a couple of hours ago.

Pressing the gas
seemed to do nothing but create ever more violent sounds from her automobile,
and so Caelyn was once more forced to take her foot off the gas.

She’d kicked her heels off and was
driving barefoot.

She was wearing
the same skirt she’d had on all evening—the one that was too short and
had made her uncomfortable with how much leg it revealed—and it was
ripped now, just a little bit.

Glimpsing the ripped
skirt out of the corner of her eye brought back memories that she was trying to
forget.

Caelyn closed her eyes
tightly for a moment and shook her head, trying to force her mind to clear,
focus on the present.

One of her knees was
scraped raw, and it hurt.

Her low-cut top was
stretched and misshapen from being yanked and pulled.

But none of those things bothered Caelyn
as much as the ache in her stomach and the burning between her thighs.

She bit her lip,
wanting to scream.

Her eyes were
starting to fill up with tears, causing the road in front of her to double and
triple in her field of vision.

Why was this
happening, now, on top of everything else?

Why was her stupid car betraying her too?

She pounded the
steering wheel with the palm of her hand.

The car was clunking
and grinding worse than ever and she was forced to slowly pull off to the
shoulder.

As she did so, the sound
of tires rolling over gravel and sticks was an eerie reminder that, other than
the sounds from her self-destructing car, the highway was almost completely silent
at this time of night.

Caelyn put the car in
park, killed the struggling engine and grabbed her purse.

All she’d brought on her trip was one
small overnight bag with some clothes and other necessities hastily thrown
inside.

Sticking out of the
top of her purse was the postcard that had given her the crazy idea for this
trip.

“Greetings from Florida” was
still visible at the upper edge of the card.

She pulled the card
out of her purse and tossed it on the passenger seat as she dug into the bag
and grabbed her cell phone.

She
needed to call for help—not Triple A, since she didn’t have it.

Maybe a cab…but that
would be beyond expensive on her incredibly limited budget.

The truth was, she
didn’t have anyone she wanted to call.

Certainly not her
parents.

How could she explain the
fact that she’d left the dorms in the middle of the night and was now en route
to Florida?

Sorry, Mom, but can you send someone to pick me
up?

I broke down on my way out of
state.

Oh, and by the way, sorry
about the fact that I’m planning on leaving and flunking my freshman year of
college.

I just needed to get away
from it all.

Sure, that would
work.

But now she had a
different problem to deal with, and that was the fact that she wasn’t getting
any reception on her phone.

It
literally said no service.

It
wasn’t a one bar situation—it was a
no
bar situation, which
meant that she might as well not have a phone at all.

And it was very, very
dark outside.

On either side of the
wide interstate were only woods and more woods, as far as the eye could see.

Her heart was beating
fast.

Especially after the night
she’d had.

The terror she’d
experienced mere hours ago hadn’t even dimmed yet--she’d just managed to push
the thoughts and memories out of her head.

But now that she’d stopped moving, flashes from earlier in the night
were coming back to her.

The smell of
pepperoni pizza sitting on the coffee table.

Her own voice, as if
from a distance, screaming.

Caelyn suddenly threw
the car door open and stumbled out, falling into the breakdown lane, her purse
hitting the pavement as her hands and knees struck the ground, sending bolts of
pain into her palms and up her legs.

Now she was crying,
sobbing.

There was the sound of an
engine approaching in the distance, and then headlights clearing the rise.

They were coming towards her.

Caelyn stood, picking
up her purse and phone and backing out of the street as the oncoming vehicle
sped towards her.

In moments, it
would be passing by.

Did she want to be
seen?

It depended by
whom.

Out here, she was a sitting
duck, and as bad as things had been earlier in the evening—her jangling
nerves told her that things could get far worse.

If the wrong person
stopped and saw a lone girl dressed scantily, with no means of transportation
and no cell service in the middle of the night, on a deserted road…

The headlights
belonged to a large truck.

As it
got closer, the truck seemed to slow almost imperceptibly.

Caelyn shrunk backwards, her buttocks
hitting the car door as the truck blew past, sending a ripple of wind and
exhaust outwards.

And then it was gone,
and she saw the break lights come on briefly in the distance before it
disappeared over the next rise.

The night was dark
and quiet again.

Caelyn glanced down
at her cell.

Still no service, and
the battery was low as well.

She
started to walk away from the car, just to see if she might get any bars a little
further down the road.

She was stuck, not knowing
who to call even if she did get service on her phone.

Sleeping by the side of the road until
dawn and then hitchhiking to the next stop?

Using her meager funds to get a train
back to Boston, tucking her tail between her legs and returning to school the
next day as if nothing had happened?

An image of Jayson,
grinning, appeared in her mind as if placed there by some dark magic.

She willed it away.

She wouldn’t go back to school after
what had happened tonight.

She was going to Florida,
even if it meant walking the rest of the way.

Caelyn made her way
back to the car and got inside.

She
grabbed the keys, determination written on her face as she grit her teeth.

Sticking the key in the ignition and
turning, she once more prayed for help.

Just let me get a few miles to the next
exit,
she
thought.

I’ll get off and find a hotel—an all-night gas
station.

The engine turned
over, but the moment she tried to drive again, the grinding and complaining
from the engine was so loud Caelyn actually wondered if the car was about to
explode.

She knew nothing about
cars, so pretty much anything seemed possible at this point.

She turned the car
off yet again and sighed deeply.

She had to admit that her
silly little plan had failed before it had even really started.

She would wait a few hours until the sun
rose, flag down a passing car and soon be headed back to Boston and all of the
ugliness that came with it.

A sense of dread
filled her stomach.

She opened the
car door and stepped out, walking hunched over to the grass of the shoulder and
was violently sick.

It occurred to her
that she’d rather be dead than go back.

She would never go
back.

A beam of light
struck her eyes, and she squinted, as yet another pair of headlights climbed
the rise and aimed for her.

Once
more, her heart started pounding as the headlights approached.

It wasn’t a truck
this time, but an SUV, heading her way at an alarming speed.

For some reason, this
time she actually wanted the car to stop.

Well, that wasn’t quite true.

She wanted it to stop, but she was also terribly frightened.

Maybe she would luck out and it would be
a nice older couple inside.

Someone
visibly safe and nonthreatening.

Or perhaps this SUV
would pass by without a second glance, much the same way the trucker had gone
by not long ago.

At first, it seemed
that that was exactly what was about to happen.

But then, surprisingly, just a yard or
two beyond her car, the black SUV slowed down, break lights flashing and
staying on.

And then it pulled off
the shoulder and stopped.