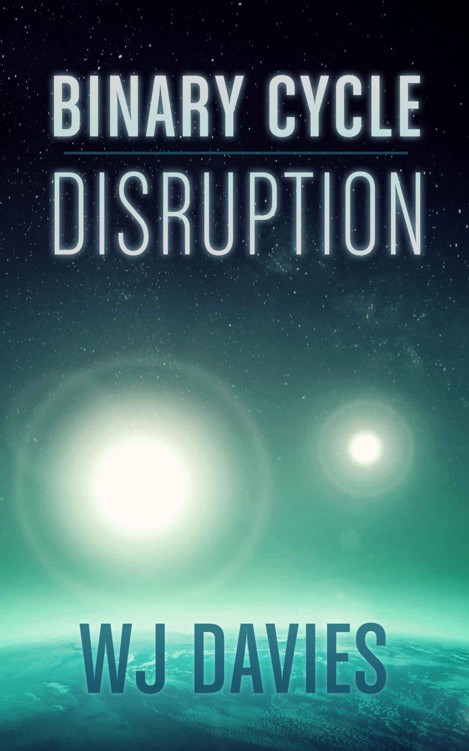 A tale of two suns
Is told by those who witness
The soft, scorching light

Cassidy Walker crumpled up the paper—a
haiku
she had been scribbling—and tossed it into the waste receptacle. She had enough dire thoughts spinning through her mind as it was, and didn’t need to be compounding her worries with bad poetry.

She walked toward the wall-sized window of her executive suite. Resting a hand against the glass, she looked out at the sea of lights from her twentieth-story vista. The rush of vehicles and blinking neon signs of Shangjai City brought a welcome distraction from the task at hand.

She had spent much of her last twenty-four hours standing right here, contemplating the lights and reworking a speech in her mind. Cassidy shook her head and wondered how she was going to tell an unsuspecting public that very soon, they would all be dead. How does one slip that little tidbit into a speech to the brightest scientific minds on Taran?

She remembered standing in a room very much like this one, two decades ago, when she had made a very different speech. The discovery they’d made back then had been a terrific scientific breakthrough.

Today, however, she had to explain that what they’d recently found was irrefutable evidence that their world was teetering on the brink of disaster—a catastrophe that humans would not walk away from.

The dancing lights and brightly lit structures below gave the impression that Shangjai was on fire. Flickering globes illuminated the great river that passed through the city, lighting up both sides like a forest blaze meeting a water source, unable to leap across. Glowing lanterns on boats and gondolas traced up and down the rippling surface like rising sparks in the Night.

A soft knock as Banner, her personal assistant and bodyguard, appeared at the door. “All ready, Miss Walker?”

She closed her eyes and sighed before turning to face him. “Yes, I’ll be down in a minute.”

Banner was dressed in a grey tuxedo, his muscled arms looking on the verge of breaking through the seams. “The delegation is waiting. Everyone has arrived.”

She checked her hair in the reflection of the window and smoothed out her white silk dress.

“You look beautiful, Cassidy, as always,” Banner informed her. “You’ll do fine tonight, they’re all excited about what you have to say.” He held out an arm, and she accepted it. “Come on, you’ll do great, I promise.”

She managed a slight smile and followed him out of the room, down the twisting staircase leading to the reception hall. She was definitely going to make headlines today, but there would be no cause for celebration.

Cassidy entered the great hall and couldn’t help but marvel at this gathering of scientists, dignitaries, and politicians.

The guests were standing in groups, anticipatory smiles on their faces, all dressed in their finest evening attire. When news of Cassidy's recent discovery had broken, scientists from all over Taran had dropped what they were doing and traveled to Shangjai, where Cassidy would present her findings to an eager public.

After tonight, they’ll wish they’d never heard of me, or my discovery
, Cassidy thought.

Wanting to get the night over with, she tried to sneak along the wall, hoping no one would notice her as she approached the stage.

“Ah, Cassidy! You finally made it.”

Cassidy closed her eyes and stopped walking, recognizing the silky voice of Nazrim Kaldri, chief scientific advisor to the Council. She spun on her heels and turned to face him, flashing that dazzling smile she was famous for. He was short for a man, but exuded a confidence befitting his position of power.

“Nazrim, lovely to see you. You’ll be making a report of my findings and delivering it to the Council, I presume?” she asked.

“Of course. But first I’d like you to meet my colleague, Rhesus Straun.” Nazrim waved toward a handsome man in his late forties, who reached out to shake Cassidy’s hand.

The man beamed at her through electric blue eyes.

“Nazrim was just telling me how much he appreciates the work you’ve done for the colony,” Rhesus said. “Thanks to you, we’re one step closer to unraveling the mysteries of this planet.”

Cassidy accepted a glass of wine from a waiter and turned to Rhesus.

“Perhaps,” she said, “but what if in revealing the mysteries, we learn something we never wanted to know?”

“No no no, I want to know everything!” Rhesus gestured his arms in a sweeping arc. “I’m a scientist, my job is to learn as much as possible. I can’t imagine there’s anything I wouldn’t want to know.”

“Would you want to know when you’re going to die?” Cassidy asked darkly, sipping the wine.

Rhesus frowned, “Only God knows the answer to that. It is outside the realm of science.”

“Then it is God’s will, and I would accept salvation,” Rhesus nodded.

Nazrim put a hand on her arm. “I’m sorry, Cassidy. Don’t get him started.”

He turned to Rhesus. “Who would have guessed the esteemed Dr. Straun was a spiritual man? Look around you, Rhesus. This is a place for science and logic. Hardly any room for what we can’t see with our eyes or test with an equation.”

“No, you’ve got it wrong,” Rhesus told him. “I value science and math above all else. But that doesn’t mean there isn’t room for God. After all, math is the language of nature; science its philosophy. And these are both conduits to God, more real to me than any of the scriptures the black-hooded priests are spouting. To me, science
is
religion, in the purest sense. When I’m practicing science—that’s when I feel closest to God.”

Nazrim grunted. “Cassidy asked if you would be willing to use science to avoid inevitable death, and you say it is God’s will whether you survive or not. Knowing the means of your death, would you not do everything in your power to prevent it? Or would you sit idle and leave it up to God? What happens when you rely on your faith too much, Rhesus? At what cost do you believe?”

“At no cost, Nazrim,” Rhesus said, shaking his head. “Faith is an infinite resource. It doesn’t need to be replenished. It never breaks down. Yes, it can waver, but that is God’s plan. If we are meant to survive, He will see that it is so.”

Cassidy downed her glass of wine, scanning the room for the waiter, hoping for a refill. She was eager to be free of this. Debating science and religion was hardly her most pressing concern at the moment.

She turned to Rhesus, “Tell me, would you put your life in His hands absolutely? Does He have the power to save a planet? Do you trust your God?”

Both Rhesus and Nazrim went silent for a moment, contemplating her words. A waiter caught Cassidy's eye and he swooped in to fill her glass.

“Trust has nothing to do with it, Cassidy,” he said. “I believe the word you’re looking for is
faith
. And yes, God does have the power to save planets, if He wishes it to be so. Neither man nor woman can know His plan.”

“A dangerous way to think, Rhesus, very dangerous…” Nazrim muttered as Cassidy slipped away and headed toward the front of the room. This night couldn't end soon enough.

Conversations hushed as she took the stage, the attention of the crowd suddenly turned toward her. Cassidy’s flowing dress followed her up the narrow steps to the podium and she squinted against the lights. Someone dimmed the chandeliers and the orchestra ceased its serenade.

The room held its breath, waiting for her to speak.

The crowd erupted into cheers and thundering applause. Cassidy felt as if she would faint. All the carefully worded lines she had memorized vanished from her mind, replaced by one overwhelming thought.

“Our world is in trouble,” she stammered.

The applause died down, confused looks replacing smiles. Sweat beaded on her forehead but she had forgotten her handkerchief in her room.

“I’m sorry to be the one to tell you this…” She gazed out at the frowning faces. This was obviously not what they were expecting to hear.

She didn’t want to finish the sentence, afraid that saying it out loud would make it truer than it already was.

“Taran is in trouble," she finally let out. "You are all aware of the increase in orbital disruptions over the last twenty years. I’m afraid this is just the beginning. We are heading toward complete planetary disaster and it’s… It is my firm belief that humanity will not survive the impending geological catastrophe. For the first time since escaping a ruined Earth, we’re facing the likely extinction of the human species.”

The crowd collectively gasped. People brought hands to their mouths and whispered angrily to those standing around them. They remained in a state of shock until a voice called out through the clamor.

“What’s the meaning of this, Miss Walker? Do you have proof?”

It was Nazrim. He was shaking his head, silently pleading with her from across the room.

Cassidy sighed, pressing her palms against the cool wood of the podium, desperately wishing none of this was real.

Cassidy met Rhesus’s eyes amid the sea of confusion. “And the truth is, we’re going to need a lot more than science to save us from what’s coming next.”

The Robotics Manager, Michael, grinned and slapped his back hard.

“Jonathas, you must be absolutely sick of freezing your ass off down here fixing this junk, heh?”

Michael clapped his hands together. “Well, I’ve got good news for you, son. You’re getting a promotion. They’re gonna make you an Operator. At your age, can you believe it? You’re gonna love it, kid.”

What took them so long?

It wasn’t true, that he would love it, but everyone always said Robotic Operations was the best work you could get in these forlorn thermal mines. He supposed he should consider himself grateful.

Sometimes the best in a bad situation is as good as it gets.