Read Bind, Torture, Kill: The Inside Story of BTK, the Serial Killer Next Door Online

Bind, Torture, Kill: The Inside Story of BTK, the Serial Killer Next Door 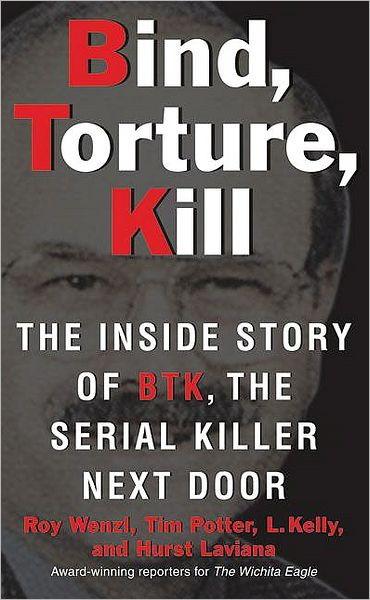 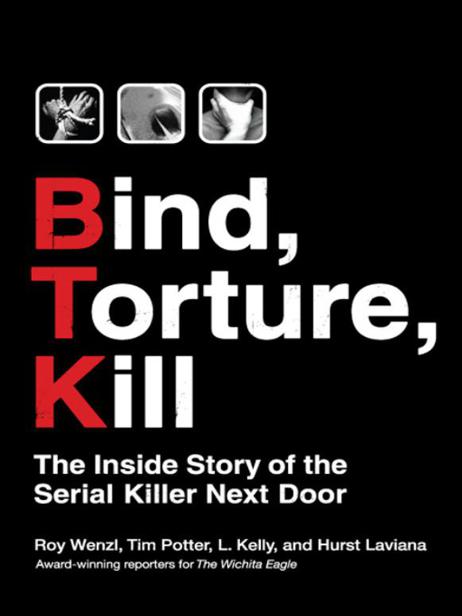 The inside Story of
the Serial Killer Next Door

A few words about the dialogue

A few words about the dialogue:

We have reconstructed many conversations through the recollections of those involved, quotes in news coverage, and our own notes. To the best of our knowledge, remarks presented within quotation marks reflect what was said at the time.

In cases where dialogue could not be reconstructed but the essence was available, we did not use quotation marks; we used phrasing to indicate that these words are substantially similar to what was said�or in the case of BTK talking to his victims, the conversations as he recalled them.

The Wichita Eagle
has covered the BTK serial killer since he first struck in January 1974. From 2004 to 2006 alone, the
Eagle
published roughly eight hundred pieces about BTK’s reemergence, the intensive investigation, the resolution, and how the case affected our community. The paper spent thousands of dollars on transcripts of court proceedings, then posted them online for everyone to read. The newspaper’s expansive and in-depth coverage earned us awards and accolades. Some might think that there’d be little new to say�especially considering the 24/7 attention BTK got from cable news shows.

But we’ve got the inside scoop. It’s not only that we know more about the BTK story than anyone else, we’ve lived it�in my case, grown up with it. We have drawn on the
Eagle
’s thirty-two-year archive�including original reporters’ notes, internal memos, and photographs.

Over the course of three decades, BTK, the
Wichita Eagle
, and the Wichita police developed complicated relationships. It was through the
Eagle
that BTK sent his first message in 1974. It was to the
Eagle
a few years later that the Wichita police chief desperately turned for help in trapping the killer. It was in a macabre letter to the
Eagle
�delivered to the police by reporter Hurst Laviana�that the killer announced his reemergence in 2004. And it was through the
Eagle
’s classifieds that the head of the investigation tricked BTK into making a mistake that led to his capture in 2005.

And when BTK�family man and church president Dennis Rader�was finally in his prison cell, it was to us, for this book, that Police Lt. Ken Landwehr and his key investigators told their side of the story in intimate detail.

Landwehr and the detectives were unhappy with the rampant errors in other books about this case; they knew we cared about this chapter of our community’s history just as much as they did, and they trusted us to get the facts right. Laviana has covered crime in Wichita for more than twenty years. Tim Potter has been nicknamed “Columbo” by the cops for his habit of calling back to double-check facts in his notes. Roy Wenzl has two brothers in law enforcement. My father was a Wichita homicide detective.

But this is not a “just the facts, ma’am” recitation of the case. The people who stopped BTK are real cops�and real characters. They’ve lowered their shields to let us take you along with them on stakeouts and shoot-outs and into their homes and hearts. In the past, talking to us for newspaper stories, they’ve been guarded. Landwehr’s public face has always been stoic. He has never sought publicity, never played games, never answered questions about himself. He is witty in person, but not easy to know.

Starting work with him on this book, Wenzl told Landwehr that we wanted to portray him accurately, not as “a plaster saint, all sweetness and success…. I want to know your flaws. I want to ask your wife about your flaws.”

Wenzl, who had covered cops for years, could not imagine any police supervisor saying yes to this. It required daring.

Then Landwehr looked at Wenzl.

“Once you get her started about that, she might not ever stop.”

The portraits of Rader and Landwehr that we have been able to draw for this book are mirror images�both men are native sons of the heartland of America, products of churchgoing middle-class families, Boy Scouts who grew up to marry and have children of their own. Yet one became a sexual deviant who killed for his personal pleasure while the other became a cop who dedicated himself to protecting the lives of others. The choices they made destined Rader and Landwehr to become opponents in a deadly game of cat and mouse.

In writing this book, we had a choice to make as well. Others have focused on portraying the evil; we wanted to give equal time to the people who stopped it.

Her name was Josie Otero. She was eleven years old and wore glasses and wrote poetry and drew pictures and worried about her looks. She had started wearing a bra and growing her hair out; it fell so thick around her head and throat that the man with the gun would soon have a hard time tying the cloth to keep the gag stuffed in her mouth.

As Josie woke up that morning, the man with the gun crept to her back door and saw something that made him sweat: a paw print in the snowy backyard. He had not expected a dog.

He whistled softly; no dog. Still, he pulled a Colt Woodsman. 22 from his waistband and slunk to the garage wall to think.

In the house, Josie had pulled on a blue T-shirt and walked from her room to the kitchen. It was a short walk; it was a small house. Her mom, Julie, was in the kitchen, wearing her blue housecoat. She had set the table, putting out cereal and milk for breakfast and tins of potted meat for school-lunch sandwiches. Joe, Josie’s dad, was eating canned pears.

Morgan's Mercenaries: Heart Of The Warrior by Lindsay McKenna
Travellers in Magic by Lisa Goldstein
Full Circle by Avery Beck
Cash Remington and the Missing Heiress (Sexy Dreadfuls Book 1) by Celia Aaron
Wannabe in My Gang? by Bernard O’Mahoney
Room Upstairs by Monica Dickens
Not Over You (Holland Springs) by Valentine, Marquita
Killers from the Keys by Brett Halliday
The School of Beauty and Charm by Melanie Sumner
The Sinful 7 of Delite, Texas 3: Her Double Delite Warriors by Dixie Lynn Dwyer
Our partner