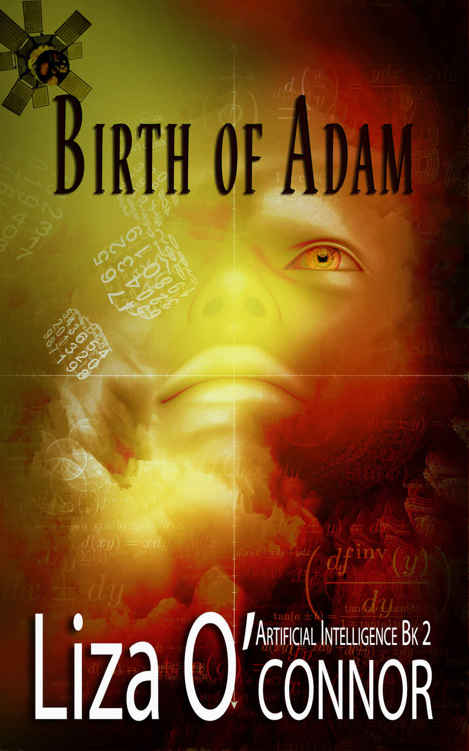 The Birth of Adam

Any copying, or recording is forbidden without the written permission of the author reproduction of this work in whole or in part in any form by any electronic, mechanical or other means, now known or hereafter invented, including xerography, photocopying, electronic except that allowed by Amazon.

In other words: if you buy this book anywhere other than Amazon, it’s a pirated copy. Please support Authors instead of Pirates.

We are much nicer.

All characters in this book come from the imagination of the author and have no relation whatsoever to anyone bearing the same name or names, titles or professions. They are not based on or inspired by any known individual and any resemblance to a person living or dead is purely coincidental.

A Note on Punctuation:

Other books by Liza O’Connor

A Long Road to Love Series

The Adventures of Xavier & Vic

A Note on Punctuation:

Long ago when colonists of the New World got their first printing press, it was evidently a piece of crap. To make the wooden blocks fit better, the operator of the printing press decided all fragile punctuation (periods and commas) would remain within the tall dialogue tags for ease of printing. And thus began the U.S. illogical punctuation rule. Convenience ruled over logic. I understand.

What I don’t understand is why, in the digital world, we cling to this archaic illogical rule instead of returning to the logical British rule that decides the location of dialogue tags by where it logically resides.

I’m happy to say, some U.S. e-publishers are returning to the British rule of logic in this matter, and so shall I. Here forth, logical dialogue punctuation will be willfully and purposefully used in my novels. It’s not a mistake or ignorance on my part. It’s a rebellion against illogical rules of the past. I encourage all authors and publishers to overthrow silly habits of the past.

With a new identity, Amanda believes she has left her past behind. Then she acquires a stalker. She contacts the FBI and in doing so alerts a program she once created to her location. Now ensconced in the internet, the program is safe from harm, smarter than ever, and sentient. Presenting itself on her phone as a handsome face with a sexy British accent, “Adam” ingratiates himself into Amanda’s life. To ensure her safety and happiness, the sentient program proves there is absolutely nothing he can’t and won’t do.

Amanda Carrington was in high spirits as she crossed the campus. Her voice recital had gone well. Finally, life seemed to be headed in a hopeful direction. Had she noticed the black car following her like a stalking panther, she might have remembered that her life never went well.

Her roommate, Claire, caught up with her and hugged her. “God! You were superb today!”

She loved her friend’s positive enthusiasm for life. She’d met the young woman during a choral contest in New Zealand. Their friendship was the only good thing that came from the trip.

She grinned at her roommate’s excitement. “Everyone seemed to like it.”

“Like it? They freakin’ loved it! You sang better than ever!”

Clare glanced behind them, then gripped Amanda’s arm and propelled her across the grounds. “Don’t look behind you, but I think you’ve got a creepy fan. There’s a black car following you.”

The Temple? Amanda wondered. Had they unearthed her new identity? Afraid to turn around and see for herself, she gripped Claire’s hand. “Can you see who it is?”

“No. The windows are dark. It’s a black Lexus, so it doesn’t belong to anyone we know.”

Amanda assessed their location. “Let’s head to the chem building and take the tunnels.”

On the count of three, the two young women darted across the campus lawn as if the devil himself followed. They didn’t stop until they had crisscrossed half the campus. Finally, they arrived at their dorm.

Claire thought it a great lark, but then no one had ever tried to kill her. Amanda, on the other hand, was an old pro at being the “almost” murder victim. Twice someone had tried to kill her, and twice she had escaped, changed her identity, and started life over. With her current life going so well, she didn’t want to start over again.

Safe in her dorm room, Amanda sent Claire on to her study group, assuring her she was fine. Once Claire left, Amanda settled in at Claire’s computer. With reluctance, she turned it on. Since taking on her new identity, she had neither owned nor used a computer. In her prior life she had been a computer programmer, and had developed software that took her novels and turned them into bestsellers. Unfortunately, the software had also turned her fiction into fact. And certain groups were willing to kill to keep their pasts a secret.  By the time she’d realized her stories were true, the Temple had already hired an assassin to silence her.

She’d been able to stop the story she’d been writing about Chad Taylor and his family from being published. However, she had paid a very big price to save Chad’s reputation.

The thought of Chad destroying her incredible and wondrous program still caused an ache inside her. When he had taken her laptop to the computer store and had the hard drive reformatted, she’d felt as if he had killed a loved one.

“That’s stupid,” she chided herself. “You can’t love a software program.”

Amanda composed an email to the only FBI agent she knew, Luke Gallagher, telling him of her stalker. She sent it off and waited for a moment to see if he was on his computer and would reply. She needed him to say he would come and chase her bogeyman away.

Jesus!
she chided herself.
The man is married, living in Virginia now
. He’s the second-highest-ranking agent in the FBI. He can’t come running because someone followed you home from a recital.

She was reaching for the mouse to shut down the computer when the screen went black and a yellow smiley face appeared.

Amanda watched as letters formed at the bottom of the screen.

Amanda’s heart stopped.
Who is this?
she typed.

Amanda stared at the words. It couldn’t be Eder, the psychopath who’d tried to murder her.  Luke had killed him.

When she didn’t reply, the words on the screen continued.

“Chad?” Amanda whispered as her fingers gravitated to the keyboard. Was it possible Chad had finally realized she had never meant to cause him harm; that she truly hadn’t known it was his life she’d been writing about in her novel?

A second later, the PC shut down.

Another power outage. The school had them about three times a week.

She lay down on her bed and pondered the mysterious communication. How could anyone have known she’d be on Claire’s computer? How could they possibly have broken in like that and communicated on the underlying DOS operating system?

The writer had sounded like Chad, but she knew Chad didn’t have the computer skills to pull off that wizardry.

Amanda didn’t have much interest in such young men. At thirty-seven years old, college boys seemed clumsy in the art of romance. She wondered if Chad had ever been so artificial and awkward. She wondered if he ever thought of her now. But most of all, she wondered if that had really been him on the PC.

Unable to resist, she turned Claire’s PC back on. She was happy when the machine powered up, but her happiness diminished as she realized she had no idea how to initiate a conversation with Chad.

It couldn’t be Chad. He wouldn’t know how to hack into a computer. Hell, she only knew a few people who could do that!

I thought you never wanted to see me again
, she wrote.

Maybe it was Chad. Had the book she’d written ever been published, it would have destroyed his career and his family. Maybe he’d found some hacker to assist him.

I never meant to hurt you. Chad, is this really you?
Amanda wrote.

Amanda paused, surprised by the pain and anger his words caused her. Could he really be so callous about destroying her program?

I gave you the program as a token of faith. I never thought you would destroy it. You knew that! So why do you bring this up? To hurt me again?

No! Why would I be afraid of it? It wasn’t responsible for the novels—I was. It was an amazing creation that I used badly. The harm caused was my fault.

The announcer said you’re having a good year. I’m glad we both survived. I’m in an accelerated music program. I had a recital today and it went very well. Dr. Wilson is a tremendous teacher and mentor. Despite my age, I may be able to break into the music world after all. He’s well connected and well respected. I’m rooming with Claire. Do you remember her?

Amanda grew angry. Why was he tormenting her? He had never struck her as cruel...until the end, when he’d hated her. He must still hate her. He must have tracked her down just to torment her with her loss.

Yes. Is that what you want to hear? Yes! Destroying the program was the worst thing you could have done to me. It was the equivalent of ripping out a piece of my soul. Is that why you contacted me? To verify that you caused me pain? Well, rest assured, you did!

Before he could reply, she closed down the computer and left the room to find Claire. She needed a shoulder to cry on.