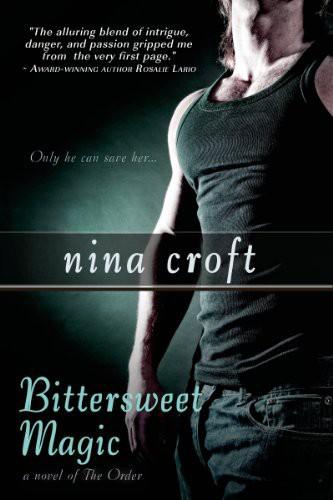 A Novel of the Order

Other books by Nina Croft

Copyright © 2013 by Nina Croft. All rights reserved, including the right to reproduce, distribute, or transmit in any form or by any means. For information regarding subsidiary rights, please contact the Publisher.

For Rob, who doesn’t mind sharing the house
with my imaginary characters

The sharp tang of sulfur burned her nostrils as a portal opened, and Asmodai materialized right in front of her sofa.

Roz gave a squeak and a jump and spilled her drink.

“I really wish you wouldn’t do that.” She licked scotch from her fingers then took a huge gulp while she gave him a quick once-over. After nearly thirty years, he still looked exactly the same.

She peered closer. He was smiling. She wasn’t sure she’d ever seen him smile before.

Tonight, he was in his human guise. Roz had seen him as both human and demon, and while neither was particularly comforting, at least in this form she could allow herself a small measure of self-delusion. Kid herself she wasn’t entertaining a demon from the Abyss in her living room.

He was tall, with midnight dark hair pulled into a ponytail and equally dark eyes, stunningly good-looking if you went for the total alpha male look—which strangely she did. Though this particular alpha male no longer had any effect on her hormones—thank God.

Her brows drew together, and she pursed her lips; he didn’t usually bother with social chit-chat. “What’s with the Mr. Nice Guy act?”

He chuckled. Another first. “Why, Rosamund, don’t you think I’m nice?”

His smile broadened. “Let’s just say I discovered something recently, and it seems things are about to get interesting around here.” He cocked his head to one side and examined her as though she were some sort of specimen of scientific interest. The inspection made her want to squirm, but she wouldn’t give him the satisfaction.

After a minute, he shrugged. “Okay, down to business. I want you to find something for me.”

A wave of excitement washed through her, though she kept her face blank.

Roz was a Seeker. She hadn’t known that when she first met Asmodai five hundred years ago. In fact, she’d known almost nothing. Only that an angry mob of villagers had just burned her mother at the stake and were piling up the wood, ready to do the same to her.

Asmodai had offered her a deal—her life in exchange for thirteen tasks. It had seemed an excellent idea at the time, but she’d never expected it to take so long. She glanced at the sigil that wrapped around her upper arm like an intricate tattoo—the mark of her debt to the demon.

Now, at last, this would be her final task and once completed, she’d be free of the dark contract she’d made all those years ago.

“What and where?” She didn’t ask why—some things were best not known. Besides, he probably wouldn’t tell her anyway.

“A Key. As to the where—if I knew that I wouldn’t require you to find it, would I?”

“I gave it to someone to hide,” he continued. “And they inconveniently died before telling me where.” He reached into his pocket, drew out a small wooden box, and handed it to her. “Here. This once held the Key. It should help you pinpoint the exact location.”

Roz stroked her fingers over the smooth wood, and a pulse of magic ran along her nerves. “You must have some idea.”

“Of course. It’s hidden somewhere within the Convent of the Little Sisters of Mercy.” His lips curved into another smile. “Looks like you’re going undercover.”

For a moment, his words made no sense. Then she frowned. “Let me get this straight. You want me to pretend to be a nun?”

“I think you would make an excellent Sister of Mercy, Rosamund.”

She swallowed the rest of the scotch and slammed the glass on the table. “Yeah, right. Of course I would.”

Roz had been right; she made a crap nun. But a deal was a deal.

Or way more appropriate in her present circumstances—she’d made her bed, and now she had to lie on the bloody uncomfortable thing.

She shifted on the thin mattress. What the fuck was in it? Straw, she was guessing. What was it about these people that had made them decide suffering was good for you?

She’d researched the place before she’d set up the job: the sisters lived by a creed she would never understand, devoting themselves to a life that was poor, chaste, obedient, and wholly dedicated to prayer.

Well, good for them. But not good for her.

She’d better find this Key thing tonight, or she’d go completely insane. There was only one more area left to search—deep under the church in the catacombs.

Excitement rose inside her. The ten o’clock bell had chimed a while back. The sisters would all be in their cells, settling for the night. No doubt they’d be down on their knees, praying to a god who couldn’t be bothered to answer.

Roz glanced around her own cell. Ten feet by ten feet, bare stone walls, a flagged floor, and a small window, too high up to look through, with no glass, just bars. Now, in the height of the summer, it let in warm, lavender scented air. She couldn’t begin to imagine what it would be like in the winter. A shiver ran through her just thinking about it.

Staring up at the ceiling, she forced herself to wait another hour, going over in her mind what she would do when she was free. In more than five hundred years, she’d seen Asmodai maybe a hundred times, but still he controlled her life totally. Told her what to do, where to go, when to disappear and give up her old life. In his own way, he’d kept her safe, taught her how to hide in plain sight, and warned her of the potential dangers.

Apparently, it wasn’t only humans who would hunt her down, but also other things. He hadn’t gone into details, just told her that under the Shadow Accords, the laws that bound the supernatural races, she was considered an abomination that could—and would—be killed.

Yeah, that was her.

She’d do this last task and she’d vanish, make a life for herself somewhere warm and sunny, away from the darkness.

She understood better than anyone what lived in the dark places, but surely, this hallowed ground would keep the night creatures at bay.

After making her way through the convent, she headed toward the church, hesitating before the huge double doors. Placing her palm on the wood, she pushed. The door eased open a mere sliver, and she slipped through. For a minute, she stood just inside, breathing in the scent of beeswax and gazing around her. Candles were always kept alight in the church, and she could see clearly. The steps to the catacombs were at the far side of the nave, past the altar, but again she hesitated.

Something wasn’t right. There was a chill to the summer air. This was her tenth night here, and the atmosphere felt different. She told herself she hated this place, but in fact, the calm ambiance soothed her. Usually. But not tonight.

Swallowing down her unease, she hurried along the aisle between the wooden pews. At the far end, a locked oak door led down into the catacombs—she’d stolen the key from the Mother Superior’s office earlier that evening. The wood creaked as she pushed it open. Raising the candle, she breathed in deeply, filling her nostrils with stale, musty air. At the same time, a sense of excitement gripped her, because far below her, she could sense the presence of the Key. The stairs seemed to go on forever; she’d counted to fifty when a shrill scream cut the silence. Roz tripped and dropped the candle. It rolled down a few steps and sputtered out, leaving her in complete darkness.

Then the night filled with screams, transporting Roz back to that long ago time. Once again, she was in that stinking cell, the stench of smoke and charred flesh heavy in the air. Grief, fear, and rage all mingling in her mind.

She whirled around and ran up the stone steps, hands held out in front of her. Almost falling through the door, she stood for a moment. The screams were louder here, and coming from the living quarters of the convent. What the hell was going on?

She was halfway down the aisle, headed for the double doors, when the sound was cut off. Skidding to a halt, she raised her head, listening. She was about to move when the door swung open from outside. Some instinct made her dive for cover behind one of the broad stone pillars.

The faint stench of rotten eggs wafted in through the open doors. Roz peered around the edge of the pillar as a mass of hunched shapes surged into the church. They lumbered down the aisle, some upright, some shuffling on all fours. Half-hound, half-human, with crimson eyes glowing in the dim light. There must have been ten or fifteen of the beasts, and at their center strode a tall man. The creatures flowed around him like water.

Roz drew back. Hugging the cool stone, she breathed in the hot sulfur smell. A smell she recognized so well.

She held herself very still as she waited for them to pass her hiding place, then edged around the pillar so she could watch. As the seething mass parted for a second, Roz caught a glimpse of one of the sisters clasped in a crooked, claw-like grip—Sister Maria, the youngest of the nuns. She was dressed in her habit, but the headdress was missing so her short hair stuck up in angry spikes. Her pretty face was blank, unseeing, as though she had zoned out of the horror going on all around her.