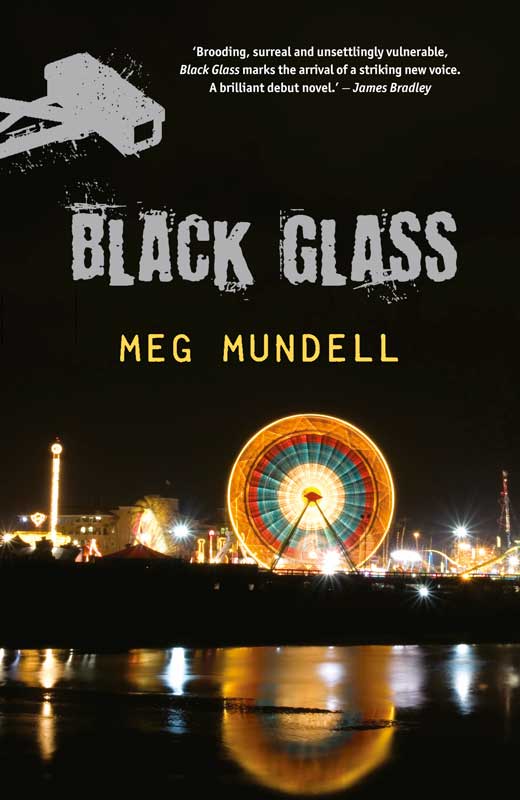 Born in New Zealand and based in Melbourne, Meg Mundell has been published widely in Australian newspapers, journals and magazines, including
The Age
,
The Monthly
,
Meanjin
,
The Best Australian Stories 2010
,
The Sleepers Almanac
,
harvest
and
The Big Issue
.
Black Glass
won the 2007 D.J. (Dinny) O'Hearn Memorial Fellowship and was shortlisted for the 2010 CAL Scribe Fiction Prize. She is now completing a memoir on trucking culture,
Braking Distance
. Meg has worked as a journalist, university lecturer, magazine editor, researcher and government advisor.

For my family, with love and gratitude 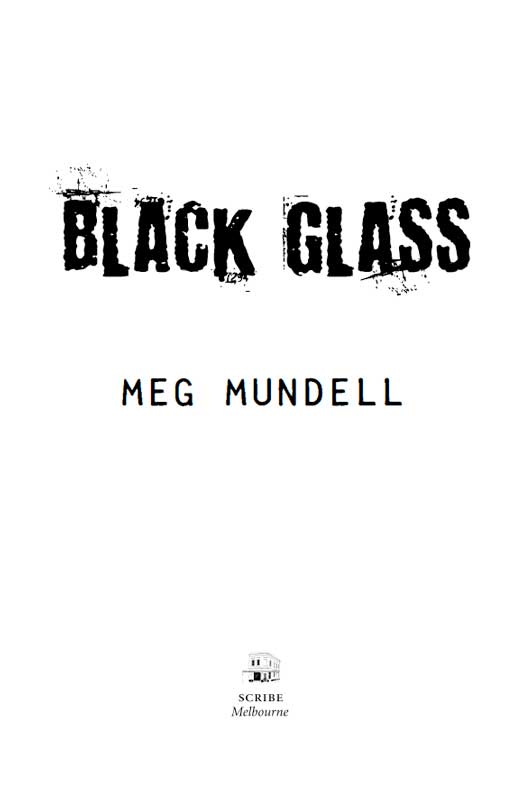 All rights reserved. Without limiting the rights under copyright reserved above, no part of this publication may be reproduced, stored in or introduced into a retrieval system, or transmitted, in any form or by any means (electronic, mechanical, photocopying, recording or otherwise) without the prior written permission of the publisher of this book.

The eyes cannot be guilty of trespass.

I have passed by the watchman on his beat

And dropped my eyes, unwilling to explain.

Article 18(b): There is no legal requirement to submit a full set of personal data to the National Documentation of Identity Database. However, any person whose full data set is not recorded in the Database and updated as stipulated may forfeit certain benefits, privileges and rights outlined in relevant national and international laws.

CHAPTER 1:
DEATH OF A CHEMIST

Right before bad stuff happens, there's always a little warning, you just have to pay attention. I seen them before: one black glove dropped by a river, a playing card lying face down in the street all by itself. One time I saw this black kitty cat with one of its eyes gone carrying a white bird in its mouth. That bird wasn't moving and bang that one-eyed cat looked straight at me â next thing you know there's a funeral to go to. Other things too, like old flowers left in a vase or living in a dead-end street when the street sign's broken and the street name's gone so you don't even know where you are, yeah Grace and me both knew that was a real bad idea, but did Max ever listen, nope. Stuff like that you can't let it run your life but you want to stay away from it, you want to knock on some wood or just walk away real fast and don't look back.

Tally had known something was about to go wrong. There had been clues: for one, their father Max had chosen a black dot in the far right-hand corner of the map, a dot that was the furthest north they'd ever been, barely on the map at all:
Belton
, it said in tiny letters. A railway line veered past it and disappeared off the page.

And the broken glass. Whenever they moved house, there were always certain boxes the girls knew not to touch: Max would mark these by scrawling
workshop
across them in thick black pen. But late that night, when the fat moths were tapping against the windows, and Tally and Grace were mechanically stowing cutlery and wrapping plates in newspaper, their father had walked into the kitchen carrying one of these boxes, which someone â someone other than himself â had already dumped carelessly into the trailer. He set it down on the table with calculated force, so they could all hear that something expensive lay broken inside. Since that tinkling sound, he had barely said a word.

Thirdly, there was the cop â not that cops were anything unusual, but this one just appeared out of nowhere, the way a spider or an omen does.

They'd left quietly before dawn and had been driving all day, the tarpaulin flapping out a hot, random rhythm against the trailer. Every so often, one of them would glance back to check that nothing had worked itself free and spilled across the road.

They crossed long stretches of brown emptiness broken by short flashes of bleached-out colour: a pinkish truck stop, a clump of pastel houses, a lone dog wagging its tail and grinning into the wind. The whole landscape was heat-blasted, and the air carried a thin haze of dust. Now and again they passed a line of blackened stumps, the remnants of another bushfire.

Max and Grace were barely speaking that day. Both were wearing cheap new sunglasses, purchased in silence from the same service-station stand: Grace's were elegant hexagons (
Paparazzi
, said the swing-tag); Max chose fly-like wraparounds that let in no light at the sides.

Their father drove steadily with a can of raspberry vodka tucked between his thighs, ferrying small sips. Grace stretched across the back seat, long red hair flickering at the open window, sometimes humming a harmony against the radio.

Leaning out the passenger window, Tally scooted her arm through the hot air. In her lap was a small silver camera. Now and then she held it up and framed a dead tree against the sky, the low shape of a barn, a woman trotting a horse in small circles.

This had been pure luck. The night before, as she was carrying home a parcel of hot chips for their dinner, the old man who lived near the takeaway shop had hung over his porch and waved urgently. âYoung lady, come here. I got something for you.' A silver shape glinted in his hand. She looked like a clever girl, he'd said. Had she ever used a camera? Hot day. He had some Pepsi in the fridge. He also had a photography book inside. Or maybe she'd like to have a loan of the camera? Just a loan.

Breath like fish bait, eyes pale and empty, he waited. Tally stayed put on the porch steps, but tucked her package under one arm and let him lower the camera into her palm. It was lighter than it looked. She lifted it to her eye, swung it over the school, the soccer oval, the gold-singed grass and steep shadows between buildings.

âDad's hungry, these'll go cold,' she said abruptly. The camera was a perfect fit in her hand; she cupped it, did not offer it back. âCan I have a play with this? I'll bring it back after dinner.'

âYour dad, eh,' said the old man coolly. âAnd what does your dad do with himself?'

Next morning they'd abandoned their rented house and driven out into the semi-dark, car squeaking under the trailer's weight. The town was silent, the old man's porch empty. Neither Max nor Grace bothered to ask Tally where she got the camera. Once it got light enough she turned around in her seat, framed Grace staring out the window, and clicked the button: pale skin, red hair, dark glasses hiding her eyes, a profile blurred by motion and the burned ochre of dead grass stretching to the horizon.

Tally was looking at the camera screen when the third sign appeared. They had stopped at a railway crossing: clamouring bells, a train roaring through her rectangle of light, dust shining in the split-second beams between carriages.

All at once the train was gone, and there, facing them across the barrier, was a police car. The bells died out, the barrier lurched up, and the two vehicles dragged their bodies over the hump of the railway line, passing in unison like two dolphins leaping through aÂ hoop. It was a smooth operation but it seemed to take forever.

They passed close. The cop was wearing mirrored sunglasses and his lenses flashed across them once, blankly. Reflected in their surface Tally saw a sliding image: their old car, the trailer, Max's stiff profile, the red flutter of Grace's hair and a pale shape that might have been her own face. She turned around and watched until the vehicle melted into the vanishing lines of the distance.

Me and Grace just went for a walk. Like I thought, real small place. Air all soupy and most of the shops closed down, windows on the houses jammed shut to keep the heat out. Some old lady on her porch squinting at us, skinny kid spitting globs into a rubbish bin outside the takeaway shop, that's about it for action. Grace was looking up at this plane flying past way overhead, leaving one of those white marks in the sky, and she goes great, just fucking great.

So we checked out the school and boy it looks even worse than the last one, bunch of them prefab buildings same colour as bread mould, bent-up basketball hoop and the court all cracked to bits. Yeah we stood there at the fence for a bit imagining the first day, how you walk in the classroom real tough, try to grab a seat up the back, with everyone looking at you out the side of their eyes, measuring you up. We stared that place down for a while, me and Grace. You can't let it get on top of you.

Found us a good lookout where you can see the whole town, up this overgrown bank near the rail tracks, where the highway cuts across. Railyard down below, big mess of tangled lines, you can watch the freight trains coming through. Can even see our place from up there, house looks like an old face, porch all saggy like a grumpy mouth. Grain silos, main street, petrol station, all them old houses then just dried-out fields with a few skinny cows off in the distance. Nothing to see really. Like Grace says, just another nowhere no-hope town.

The girls left the house in that sliver of time between late afternoon and evening. That afternoon Max had retreated into the back room, lugging a plastic container filled with pale blue liquid. âDon't draw attention to yourselves,' he'd warned over his shoulder, before locking the door of the room behind him. His hair stuck out in clumps, and he was getting kind of bristly: never a good sign.

They'd been in town a week. Belton didn't seem to be paying them any attention, but Tally knew they were strangers, and strangers are always watched from afar. This time their surname was Blackwell, but so far nobody had asked.

The sun was sinking when they cut through a vacant lot and entered the dark huddle of pine trees leading down to the train tracks. They stopped, checked for silence, then crossed the tracks quickly and climbed the steep bank opposite. Tally scrambled up first; Grace, carrying the drinks, followed more carefully.

Morning-glory vines hung from above, their green loops strung with flabby purple bells, and the sparse traffic below threw splashes of sound and light up into the darkening air. All towns have hidden places where private plans are made â gaps under bridges, an overgrown roadside, the sunny fire-escape of an abandoned building. Tally had a knack for discovering these intimate places. She knew the signs: a certain alignment of colours, smells, distances; a certain view.

Up here on the bank, buried in the vines, was a small backpack containing a silver pencil and a notebook with the timetables of passing freight trains recorded in Tally's neat hand, under her sister's strict instructions: when they'd stopped, and for how long. The next page carried a scratchy trail of calculations and crossings-out, which corresponded to a thin wedge of bills in an envelope. It wasn't enough.

After Hours by Cara McKenna
Sedition by Cameron, Alicia
Boxed Set: Rocked by a Billionaire – Vol. 1-3 by Swann, Lisa
Breathing Room by Susan Elizabeth Phillips
PoetsandPromises by Lucy Muir
On Galaxy's Edge: Ascendance by Alex T. Kolter
The World of Kurt Vonnegut: Peace in Amber by Hugh Howey
Inconceivable by Carolyn Savage
Alec the Wanderer: Generations of Eredwynn #4 by Daniel B. Harris
Assassin's Creed: Brotherhood by Bowden, Oliver
Our partner