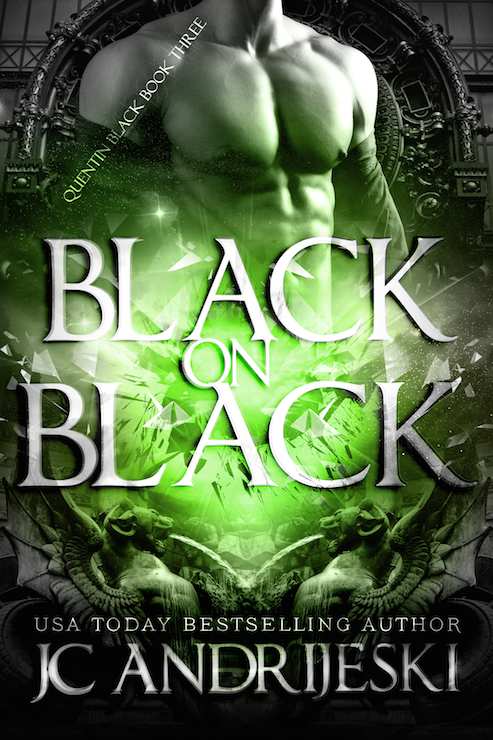 This ebook is licensed for your personal enjoyment only. This ebook may not be re-sold or given away to other people. If you would like to share this book with another person, please purchase an additional copy for each person you share it with. If you're reading this book and did not purchase it, or it was not purchased for your use only, then please visit an official retailer for the work and purchase your own copy. Thank you for respecting the author's work.

Synopsis for
BLACK ON BLACK

“What kind of confession are you looking for, brother…?”

Miri can feel him though, more every day. She feels so much from him, from her dreams and into her waking life, that her world starts to spin out of control, especially when things between Black and his new employer begin to sour. Black's in danger, although he won't admit that to her either. Worse, his new "job" starts to look more like Black being run through the gauntlet, proving his loyalty to his race and to the psychopathic Lucky Lucifer, who controls a mysterious cult of seers out of Europe.

Convinced Black's life is in danger, Miri realizes only she can save him. But to help Black, she has to cross lines she swore she'd never cross, exposing herself in a way that will change her life forever.

As a wise ten-year-old once said to me:

It’s all your fault.

SOMETHING BAD IS COMING

HIS PRESENCE washes over me. It brings a dense flush of heat I feel over every inch of my skin. His pain echoes. It grows louder, softer...

an intensity of longing I can’t think through, can barely stand. Some of that feels like it’s about me.

Both things hurt me.

The emotions hurt me, but it’s not just longing. It’s not just emotion. It’s not all in his head, or even in the parts of him that make him different from other men.

I don’t know how I know that.

I don’t know how I know any of these things.

I know the same way I know it’s daytime where he is, that a fire burns in an old fashioned grate, that the ceilings are high and an ancient light fixture hangs over the leather chairs on the hearth. I know all of this the same way I know this hasn’t happened yet. This is the future, not the present. It is barreling towards both of us too fast to get out of the way.

I don’t understand why they’re hurting him or even how––what they’re doing to him that causes him so much pain. I know it has something to do with what he is.

He’s alone and they’re hurting him and there’s nothing I can do.

The pain worsens. Both kinds.

Images flicker behind my eyes, blanking out my view of the room. Images of war. Images of gunfire, fighting. Hand to hand. Explosives. Jumping out of airplanes and lying in trenches, his feet and ankles sunk in the sucking, cloying, freezing mud. Some of it feels familiar, even recent. Some of it feels old. Some of it feels completely foreign to me, like it might come from that other place, that version of Earth where Black was born.

That place he calls “the Other Earth,” or even, jokingly, “Earth-1,” the version that might still exist in some other dimension.

I still don’t understand what that means, not really. Sometimes I wonder if he understands it himself, or if he just appeared here one day, and learned to adjust.

He says he was young when he got here, practically a teenager.

I glimpse him younger still, maybe even a child.

I see him being hurt there too. Even really young, I see people hurting him.

I feel the connection to that version of him lying sweating in a bed in a high-ceilinged room. They are evoking those memories in him. They are using his memories somehow, using them to break things in him. I see him lying there, near the fireplace and the leather chairs...

lost in his own memories while they try to break him. I can almost hear it––like glass shattering, like bones crunching under metal teeth. The feeling makes me want to cry.

badly enough I hear myself somewhere, gasping in pain. Worse, it reminds me of what Solonik did to me.

Whoever these people are, they want to break Black the way Solonik tried to break me. They want to mold him in some way, to force parts of him inside metal boxes...

to build him anew in their own image. They fight their way inside, using his memories, his feelings, things he cares about, things that broke his heart, things he hates and loves. Even now, they look for ways to reach him. They look for open doors, or doors they can kick their way through.

You’re running out of time...

I don’t know whose voice it is.

When I fall asleep, or even doze, more and more, he is there.

It’s like your war, Miri,
he says.
It’s like Afghanistan, only without the water boarding. Without the loud sounds and the flashing lights and the sleep deprivation and the maggoty food and the beatings...

it’s like that. They’ll keep doing it until they find a way in. No one can withstand it forever. I couldn’t. He won’t either...

even though he’s stronger than me. You know that, Miriam...

you know. The humans trained you in this...

The voice is familiar. Familiar but not to me.

It is from that other place. It belongs to Black.

Now it belongs to me, too.

Something about it makes me want to cry.

I can’t place that voice. I can’t give it a name.

He loves Black. He loves him.

Whoever he is, he is right.

I know he is right. I know something bad is coming.

The thought terrifies me.

The thought scares me out of my mind, but there is nothing I can do.