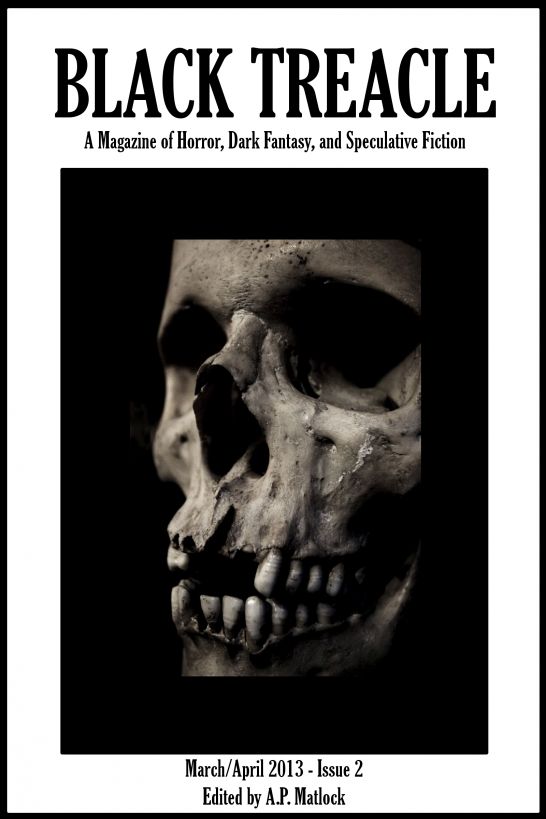 “Night Shift at
the Tim Hornets” Copyright © 2013 by
Mike Rimar

“A Pair of
Ragged Claws” Copyright © 2013 by
Kate Heartfield

Thank you for
downloading this free ebook. You are welcome to share it with your
friends. This book may be reproduced, copied and distributed for
non-commercial purposes, provided the book remains in its complete
original form. If you enjoyed this book, please return to
Smashwords.com to discover other works by this author. Thank you
for your support.

Black Treacle
Magazine is a free monthly Magazine dedicated to original short
fiction in the Horror, Dark Fantasy, and Speculative fiction
Genres. Released on the first or second Tuesday of each month

Night Shift at the
Tim Hornets

A Pair of Ragged
Claws

I am very happy to be finally getting the
second issue out. Submission volume has been improving enough that
I still think it’s feasible to keep this as a monthly magazine.
This issue should hopefully be the only double-month. So Writers,
keep those submissions coming!

In March,
Black Treacle opened to non-fiction submissions. I’m pretty excited
about this and have a few candidates for publication in our May
issue. It was also announced that we would begin distribution on
Amazon to ensure the widest possible audience. We are still are
still committed to delivering Black Treacle Magazine for free but
since free distribution isn’t an option when publishing with
Amazon, it will be available at 0.99, which is Almost Free.

We’ve got some
interesting stories this month: a good mix of humour, horror, and
the bizarre. I hope you enjoying reading them as much as I did.

A.P. Matlock
is a Writer and the
Editor of
Black Treacle
Magazine.

They sped down
the latest back road Jesse had turned onto, gravel and dust kicking
up in the pickup's wake.

"Any signal on
that thing yet?" he asked Elaine.

"Be patient,
dammit. Don't you think I'd tell you if it was working?"

Jesse growled.
"Just let me know when you figure out where the hell we are."

"At least we
haven't seen any cops."

Jesse kept
driving. It was just after two in the afternoon. Five hours after
he and Elaine had robbed the only bank in Haskell Canyon. The plan
was to get out of Texas, be in Oklahoma before dark. Lie low. Well,
that was plan as far as Elaine knew at least. The part she didn't
know about was when Jesse would put a couple of bullets in her.
He'd needed a driver, and she'd been good for that, but he wasn't
planning on splitting the take with her.

The plan--the
official
plan--had gone awry when he'd seen that damned
state trooper car about fifteen miles out of Haskell Canyon. He'd
turned onto one back road, then another. He kept turning, thinking
he was heading north and east each time, figuring eventually they'd
hit I-44. But the parade of back roads just led to greater and
greater desolation.

Elaine reached
across the cab of the truck and turned the volume down on Jesse's
music.

He glanced at
her, turned the music back up. "Don't mess with the music, Elaine.
My car, my rules."

"You've got it
so damn loud I can't even think."

Jesse snorted.
"I bet you didn't mind it loud back when you were my age."

He noticed the
road veering sharply to the right at the last moment and fought to
keep tires on pavement. It was a close thing and the growl of the
tires against gravel at the edge of the road drowned out whatever
reply Elaine had for his retort. He knew she was sensitive about
her age, ever since that time he'd commented that she was old
enough to be his mother. Man, was that a sore subject...

The road kept
curving and twisting. Jesse had no clue what way they were going.
Hell, for all he knew, they could be on a road right back into
Haskell Canyon. And wouldn't that be a kick in the ass?

The road
twisted around a little hill and finally hit a straightaway. A bit
down the road, Jesse saw a cluster of buildings.

"Anything
yet?" He asked Elaine, thinking that they had to be getting some
kind of coverage this close to a town.

"I said I'd
tell you, didn't I? You just pay attention to the road."

Jesse didn't
want to have to stop in Nowheresville. People would remember seeing
them pass through. But if there wasn't signal out here, they'd just
have to chance it. Long enough to get their bearings. He
accelerated on the straight, flat road. The sooner they could get
into and out of this place, the happier he'd be.

The truck
started to sputter. Jesse checked the dashboard. No lights flashed
but something was wrong. He wasn't getting any response to the gas
and the truck was coasting.

A short ways
from town the truck shuddered violently and stopped. Jesse tried
starting it, but the engine wouldn't turn over.

"Yeah, tell me
something I don't know, Elaine." He climbed out of the truck. "I'm
going into town, see if there's a mechanic or something. Stay here.
Don't do nothing stupid. Got me?"

She nodded,
her lips tight.

He started
down the road. The pavement was cracked and bumpy. The town itself
was off on a little spur of road, butted up against the base of a
hill. Jesse turned onto that bit of asphalt and walked by a sign
emblazoned "Welcome to Blackrock. Population 127." An old Buick,
rusty and missing a tire, was parked at the side of the road.

The
late-September air was unseasonably hot. He was sweating as he
entered town. Everything was still; no one was around. Probably
staying inside, keeping out of the heat. He checked his cell phone,
but it was as dead as Elaine's.

Jesse found a
gas station, two fuel pumps in front and a little shop in back.
There were a couple of cars parked, but no one was in the shop.

"Hello?" he
called out, his voice sounding flat. No one replied.

"Goddamn." A
door at the back of the store led to an office, also vacant.

Jesse looked
around the store. It was a pretty pathetic place. He rubbed his
nose and tried to think of what he might find here that would help
get them going again. He browsed the auto aisle--lots more here
than in the food aisles--and grabbed fuel injector cleaner and a
gas can.

Back outside,
he pumped a few gallons of gas into the can and dumped the fuel
injector cleaner in. The heat and the weight of the gasoline wore
him down as he walked out of town. By the time he got to the truck
his shirt was soaked and his head was pounding.

"Run into any
trouble?" Elaine asked. She was sitting on a large rock a short
ways off the road.

Jesse looked
at her, sitting there cool and collected. Shit, he should've had
her go into town. After all, she was the one who bragged about
running marathons in her fourth decade.

"It was weird.
I didn't see anyone around, not at the gas station, not anywhere.
Like everyone just up and left town."

He dumped the
contents of the can into the gas tank and climbed into the stifling
truck cab. "Let's get going. Staying still like this is making me
edgy."

He tried
starting the truck. The engine whirred and groaned, nearly turning
over several times, before falling completely silent.

Jesse slammed
his hands against the wheel. Pain lanced up his arms. "God.
Dammit!" He threw the door open and jumped back out. It almost felt
comfortable out there after being inside the truck. Elaine came
back to his side of the truck.

"There were
cars in town, weren't there?"

"Well, there
you go. We'll just have to take one of those."

Damn. Why
hadn't he thought of that? Even if the truck had been fine with the
gas, he didn't have to sweat his way back here. The heat must have
been making him stupid.

But not stupid
enough to volunteer for a second hike into Blackrock. "Tell you
what, how about this time I watch the truck and you go into
town?"

She rolled her
eyes. "Sure. Why not. You just wait your barely-legal ass here and
I'll go fetch us a car," she said. She took a few steps and turned
around. "Don't do nothin' stupid, Jesse. Got me?" She whirled back
and took off again without waiting for an answer.

She was gone
for hours. From time to time Jesse could just barely see her, down
in town, going from building to building. The sun was getting close
to the horizon before she returned, not with a car, but on
foot.

"Something's
seriously wrong here," she said after she sat down on her rock. "I
didn't have any trouble finding car keys. You were right, it's like
everyone took off. More like they just vanished. But none of the
cars would start. I tried checking the phones, too, and all of them
were dead too. The cell phones wouldn't even turn on."

They were both
silent briefly.

He ran his
hands over his face, thought, came up blank. "I don't know. What do
you think?"

"Yeah, but
you're..." he almost said "older" but caught himself in time to say
"pretty damn smart, too."

"Well, this
isn't exactly my area of expertise."

Down in the
town, a light flickered on. A moment later, another. And then a
third. They both watched quietly as several other lights came to
life.

"Should we
check it out?" Elaine asked.

He cut her
off. "I don't want to walk there just to see no one's around.
Besides, like you said, something's wrong here. Cell phones don't
go dead overnight. Sounds like no one's been there in a while.
Let's rest here tonight, check it out in the morning. If someone's
there to help us then, fine."

Elaine didn't
answer and he figured she'd seen the sense in what he said. The
truck's cab had cooled a bit with the setting of the sun and Jesse
hopped up into it. "How about you take first watch, Elaine? I'll
sleep now, you wake me up in a few hours and we can switch
places."

"Whatever,"
she said from outside. Hell, good enough for him. She was getting a
real attitude, but he was glad he hadn't planned on rubbing her out
too early. Having someone to watch his back during this part of the
getaway was going to be awful handy.

He woke up to
Elaine shaking his shoulder.

"I had an
idea," she told him. "Let's go back into town. Probably no one's
there like you said. But I bet the gas station has maps. We get
one, figure out where we are, and see if we can make it somewhere
on foot. If we do that now, we can walk while it's cool. We get to
another town, there's got to be a working car there, and we bring
it back here and get our stuff."