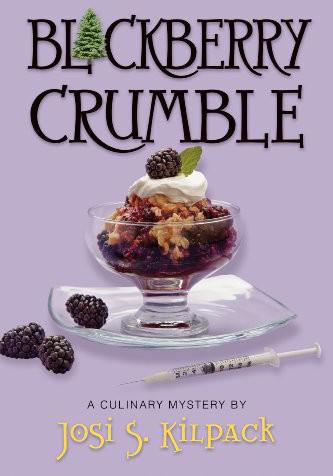 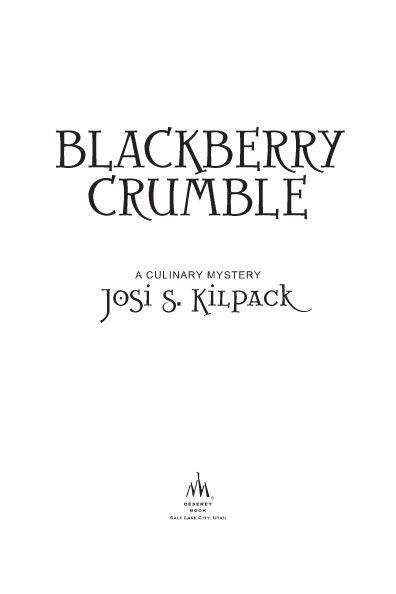 © 2011 Josi S. Kilpack.
All rights reserved. No part of this book may be reproduced in any form or by any means without permission in writing from the publisher, Deseret Book Company, P.O. Box 30178, Salt Lake City Utah 30178. This work is not an official publication of The Church of Jesus Christ of Latter-day Saints. The views expressed herein are the responsibility of the author and do not necessarily represent the position of the Church or of Deseret Book. Deseret Book is a registered trademark of Deseret Book Company.
All characters in this book are fictitious, and any resemblance to actual persons, living or dead, is purely coincidental.

Summary: When Sadie Hoffmiller is hired by May Sanderson to investigate the death of her father, Sadie travels to Oregon and uncovers a complicated plot of greed, shady business dealings, and more than one member of the Sanderson clan with a motive for murder.

“I had a great time following the ever-delightful Sadie as she ate and sleuthed her way through nerve-wracking twists and turns and nail-biting suspense.”

“Sadie Hoffmiller is the perfect heroine. She’s funny, sassy, and always my first choice for crime solving. And where better to solve a mystery than the Florida Keys? Key Lime Pie satisfied with every bite!”

“The title of Key Lime Pie will make you hungry, but the story will keep you too busy to bake. Even when oh-so-busy amateur sleuth Sadie Hoffmiller vows to stay out police business, life comes up with a different plan. A missing girl, a very interesting man with bright blue eyes, and plenty of delicious recipes all create a combination even Sadie can’t resist.”

“There’s no mistaking that Kilpack is one of the best in this field and not just in the LDS market. Lemon Tart was good, English Trifle was better, but with Devil’s Food Cake she delivers a polished novel that can hold its own anywhere.”

“Throughout the book, Kilpack offers fast-paced adventure supplemented with well-plotted bursts of information plus several surprises to keep the reader off-balance but fascinated.”

“Josi Kilpack whips up another tasty mystery where startling twists and delightful humor mix in a confection as delicious as Sadie Hoffmiller’s devil’s food cake.”

—Stephanie Black, two-time winner of the Whitney Award for Mystery/Suspense

“English Trifle is an excellent read and will be enjoyed by teens and adults of either gender. The characters are interesting, the plot is carefully crafted, and the setting has an authentic feel.”

“The novel has a bit of everything. It’s a mystery, a cookbook, a low-key romance and a dead-on depiction of life. . . . That may sound like a hodgepodge. It’s not. It works. Kilpack blends it all together and cooks it up until it has the taste of, well . . . of a tangy lemon tart.”

“Lemon Tart is an enjoyable mystery with a well-hidden culprit and an unlikely heroine in Sadie Hoffmiller. Kilpack endows Sadie with logical hidden talents that come in handy at just the right moment.”

Other Books By Josi S. Kilpack

* Download a free PDF of all the recipes in this book at josiskilpack.com or deseretbook.com

Quiz me,” Sadie said, straightening the row of cherry chocolate chip cookies she’d laid out on the platter. Pete Cunningham, her
absolutely-certain
boyfriend, was also laying out cookies—blueberry muffin tops to be exact. The Fourth of July had been several weeks ago, but she’d chosen the color scheme of red, white, and blue for the annual Latham Club summer picnic, which made the cookies a perfect fit.

“Okay,” Pete said in his rich voice, placing a final cookie in his row—you couldn’t really stack or layer blueberry muffin tops, but he was doing a wonderful job of arranging them as attractively as possible. More points in his favor, though he didn’t need extra credit. Their relationship had moved to a new level the last few months, and Pete had proved himself a hundred times since then. “How many exits?”

“Three,” Sadie said with confidence; that was an easy one. She popped open a plastic clamshell container and tried not to be offended by the store-bought cookies. She’d have made more cookies if she’d known the other people on the food committee weren’t making their own. “Double doors straight ahead, single doors to the close left and far right. The doors behind us don’t count because they lead to the kitchen, which leads to the fenced parking lot.”

“Good,” Pete said. “But always assume you’re in the six position on a clock and specify exit locations by the hours they represent. That would make the double doors eleven o’clock, since they are slightly left of straight ahead. The single doors would then be at eight and two.”

“Got it,” Sadie said, a little thrill of discovery rushing through her. People might say you can’t teach an old dog new tricks—and at the age of fifty-six, Sadie could certainly be considered a mature student—but she was proving the cliché wrong under Pete’s excellent tutelage. “What else?”

“How many chairs are along the walls?” Pete asked. “That will give you an idea of how many people are expected to be here.”

“About seventy,” Sadie said, glancing quickly at the left wall and estimating that there were twenty-something chairs lined up. Two other walls had what looked like equal numbers of chairs, and the fourth wall had the tables for the food. However, since she’d helped plan the event, she already knew how many people were expected. Originally, the annual picnic-style dinner was supposed to be held outside, but Garrison, Colorado, was at the mercy of a hot spell so the event had been moved to the city hall—a former elementary school with a nice-sized gymnasium and an overzealous air conditioning system. It was 5:30 in the evening, ninety degrees outside, and yet Sadie had goose bumps since it was a chilly sixty-five degrees in the gym.

“And where are your keys?”

Sadie’s head snapped to the side, and she looked at Pete in surprise. “My keys?” she asked. In the weeks since she’d started asking him to quiz her about her surroundings—honing her skills of observation—he’d never asked about anything other than the place they were at or the people they were with.

Pete glanced at her as he straightened the row of store-bought M&M’s cookies someone else had brought and then wiped the crumbs off on his apron. Sadie thought he looked very cute in the apron. “If you had to leave in a hurry, you’d need your keys. Where are they?”

Letters From The Ledge by Meyers, Lynda
Eichmann en Jerusalén. Un estudio acerca de la banalidad del mal by Hannah Arendt
A Danger to Himself and Others: Bomb Squad NYC Incident 1 by Fishman, J.E.
The Blonde Theory by Kristin Harmel
Hinekiri by Shelley Munro
Vanity by Jane Feather
The Changelings (War of the Fae: Book 1) by Casey, Elle
Biarritz Passion: A French Summer Novel by Laurette Long
Confessions of a Hostie 3 by Danielle Hugh
Iron Night by M. L. Brennan
Our partner