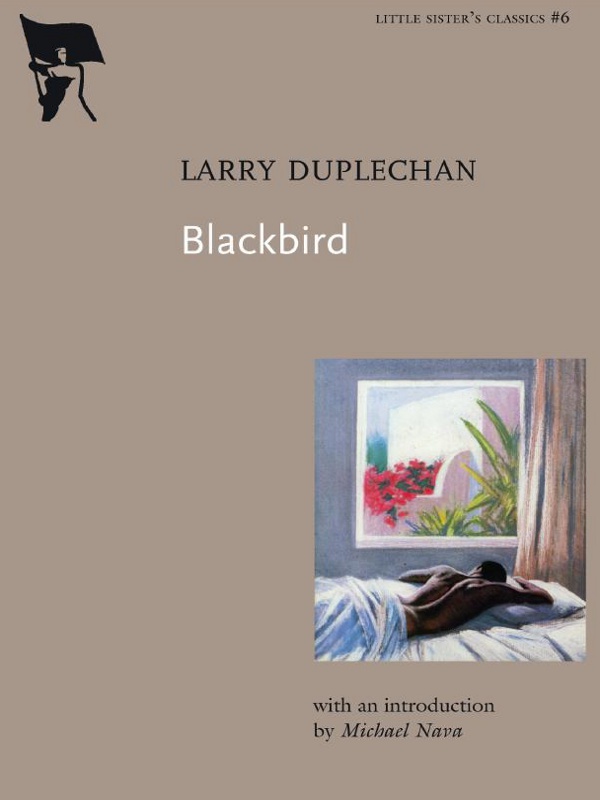 All rights reserved. No part of this book may be reproduced or used in any form by any means — graphic, electronic or mechanical — without the prior written permission of the publisher, except by a reviewer, who may use brief excerpts in a review.

This is a work of fiction. Any resemblance of characters to persons
either living or deceased is purely coincidental.

To the Four of Us:
Chris and Wef, Greg and Larry
Ten more years!

Few examples in the body of gay men’s literature are more upbeat than the Johnnie Ray Rousseau novels by Larry Duplechan. Johnnie Ray jumps off the page with a
joie de vivre
that is very rare in gay male fiction. Even when confronted with self-doubt and sadness, Johnnie Ray’s tough and persistent reflections offer us a view of a soul that is wide open, accessible, and musical. Wherever Johnnie Ray goes, there is music.

Blackbird
, credited as the first black coming out novel, tells the story of Johnnie Ray’s suburban adolescence – his awkwardness, his yearnings, and his sudden discoveries. Duplechan portrays this clumsy period with a candidness that is sometimes shocking, yet always truthful. The urgency of every moment is palpable, and the odd pain of first love and the joy of sexual discovery are brought to the foreground.

Twenty years after its first publication we present Larry Duplechan’s
Blackbird
as a Little Sister’s Classic. We also include an introduction by Michael Nava, a renowned author, friend, and contemporary of Duplechan during the mid-1980s.

We have also mined the author’s personal files to recall the context, and to some degree, the culture that understood this remarkable work.

May Johnnie Ray Rousseau’s music live on for a very long time.

The title of Larry Duplechan’s second novel is a simple one. As one reads the book, however, the implications of the title slowly reveal themselves and in the end, the title is not simple at all. It is, rather, a multi-layered comment on the story, a coming out and coming of age tale; the main character – seventeen-year-old Johnnie Ray Rousseau – and the author, a gay African-American whose chatty, seemingly casual style, like the title itself, eventually yields, as Joni Mitchell (one of Johnnie Ray’s favorite singers) might say, “the deeper meanings.” I’m going to explore the title’s several layers of meaning as a way to discuss the novel as a whole, and then talk about the generation of gay male writers to which the author of
Blackbird
belongs. It is a generation whose books, like this one, are almost all out of print and whose members, virtually to a man, have sunk from public view and literary consciousness.

Now, in ascribing these various meanings to the title, I am not saying that Larry
1
was necessarily aware of all of them – writing a novel is a lot like dreaming, half the time the writer herself barely understands the implications of the words that pen has put to paper – but, as in a dream, I would argue that all these meanings were present in, and generated by, Larry’s consciousness.

The title refers, of course, to the Lennon-McCartney song of the same name that appeared on
The White Album
. The lyrics of the song serve a signal purpose in the novel, but one cannot overlook the title’s general significance. Larry has chosen a song title to be the title of a book that is pervaded by music. I don’t know whether, when he settled on this title, Larry was remembering that one of the antique euphemisms gay men used to describe themselves and each other was the word “musical” – as in, “Is he musical?” – but it has that association. This particular euphemism is also significant because of the link it makes between homosexuality and creativity, albeit in a campy manner. Johnnie Ray fits this description. He is not only gay and named after a momentarily famous (and also allegedly gay) singer, but he is also literally musical, describing himself to the boy who consensually deflowers him as “a singer basically.” Moreover, Johnnie Ray’s musical ability allows him to express what is inside him – the yearning for love – without giving himself away; music also provides a refuge and a consolation from the loneliness and harshness of his daily life. The opening pages take place in the choir room of the suburban high school the teenage characters attend, a room that Johnnie Ray describes as “a combination clubhouse and union hall.” It is, like his bedroom, a safe place, and there is music, too.

Music and singing, then, are at the heart of the book. What is the significance of this? One meaning is obvious – since at least the 1920s, successive generations of American teens have found unity in music, and by the songs they sing thou shalt know them. Larry’s references to “Blackbird,” “Suite: Judy Blue-Eyes,” “Goodbye Yellow Brick Road,” and James Taylor’s “Long Ago and Far Away” serve as shorthand for identifying the time – the mid-1970s – and by extension the generation of teenagers he is writing about. These kids are the younger brothers and sisters of the hippies and activists of the 1960s, and while the scent of pot and patchouli oil still hangs vaguely in the air, these teens are not politically engaged or particularly militant in any way. They are gentler and sweeter than their older siblings, more inwardly focused and deeply adrift (like the pot-smoking, shambling, mumbling ’70s high school kids in Richard Linklater’s great 1993 movie
Dazed and Confused
). But Larry’s choice of songs signals something more than time; it also signals place. The music in the book is folksy and acoustic rather than, say, head-banging electric, and this tells us that we are in a suburb a great distance from the cutting edge cities where punk rock was emerging. These kids are conventional and culturally conservative in a small desert town outside of Los Angeles that, one cannot help notice, is stultifyingly dull.

In addition to orienting the reader to time and place, Larry’s use of song serves another, specific purpose that I think only a gay writer could have conceived: it gives the teenage boys in the novel a way to express a tenderness toward one another they could not say with words alone. Johnnie Ray is not the only singer among the boys in this novel. His classmate crush Skipper and the beautiful, ill-fated Todd, who Johnnie Ray also loves from a helpless distance, are also singers. When Skipper invites Johnnie to sing “Long Ago and Far Away” and when Johnnie tries to bring Todd back into the fold by proposing that they sing a duet of “Blackbird,” they are expressing a kind of love for each other they are otherwise unable to acknowledge (to Johnnie Ray’s frustration). When I talk about the love between these boys, I am not talking about some kind of sublimated sexual longing, because what clearly emerges from the story is that these boys, the Skippers and Todds, are straight. But they are still close enough to the time when girls had not yet been admitted to the treehouse to regard other boys with a faint residuum of tenderness that they will soon enough leave behind with the other toys of childhood. A great source of Johnnie Ray’s suffering through the first part of the book is that, like the Ancient Mariner, when he is with the Skippers and the Todds there’s water, water everywhere, but not a drop to drink. Johnnie Ray is not unaware of the currents of love that flow between these boys – he is, indeed, hyper-aware of it – but he also knows that the ache of sexual longing that these feelings stir in him will not be assuaged by a couple of duets. Johnnie Ray does not merely love the Skippers and Todds, he is in love with them and desperate for reciprocation.

It is Johnnie Ray’s awareness of what he wants and who he is that ultimately makes him a rather heroic figure rather than a pitiable one, because at the moment of truth, when another gay boy, Marshall, appears on the vista, Johnnie Ray not only jumps at the chance to fulfill his sexual longings, he has an epiphany that marks a turning point in his moral development: “And the thought that Marshall MacNeill might be gay made him suddenly more exciting, more desirable to me than Todd or even Skipper, both of whom I knew beyond a shadow of a doubt were straight.” What Johnnie Ray realizes is that his sexual and emotional longings constitute parts of his identity in the deepest sense – deeper, as we shall see, than even the color his skin – and that the life-fulfilling intimacy he seeks with another man will only be possible with one who shares this gay identity. In this single sentence is a summary of the gay revolution, a revolution of consciousness when, perhaps the first time in human history, homosexuality was experienced by gay men and lesbians not as a sickness, sin, crime, or even mere sexual desire, but as a fundamental part of being.

This brings me back to the specific lyrics of “Blackbird” as they bear on the larger themes of the story. In the song, the bird is “singing in the dead of night” and afflicted by “broken wings” and “sunken eyes.” But despite its apparently pathetic state, this small, ordinary creature is not dying but waiting to be reborn. The lyric tells us “All your life / You were only waiting for this moment to be free” and urges the bird “to fly into the light.” The lyrics end with the line “You were only waiting for this moment to arise” emphatically repeated. Clearly, this is not a dirge but an ode to spiritual possibility. Johnnie Ray himself is the blackbird of the title. Like the bird in the lyrics camouflaged by night, Johnnie Ray is also hiding himself and, like the bird, he is a solitary figure. This is not apparent at first because the book is densely populated with characters and events and also because the narrative voice is almost frenetically chatty and compulsively self-disclosing. But beneath the stream of events and the brightness of the style, there is a profound current of mingled loneliness and yearning, and it is upon this fierce current that the story moves. At some points this is explicit in the text, as when Johnnie Ray, watching Skipper make out with his girlfriend Katherine, says: