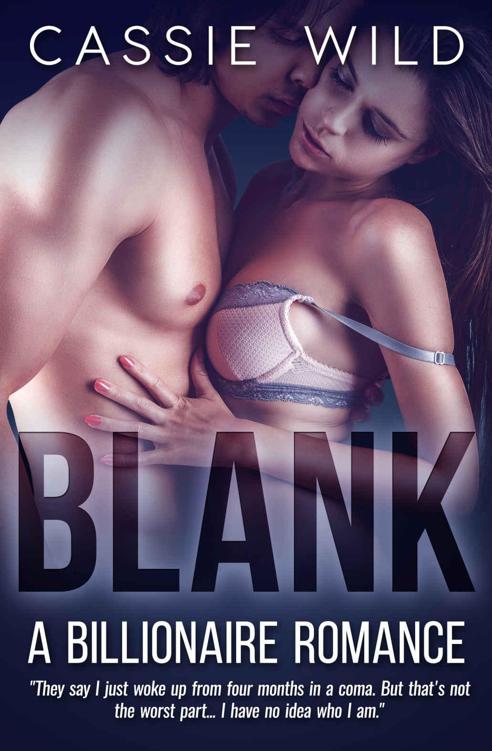 This book is a work of fiction. The names, characters, places and incidents are products of the writer’s imagination or have been used fictitiously and are not to be construed as real. Any resemblance to persons, living or dead, actual events, locales or organizations is entirely coincidental.

"They say I just woke up from four months in a coma but that's not the worst...I have no idea who I am!"

When nineteen year-old college student, Preslee Keats, wakes up after four months in a coma, she has no recollection of what happened, of how she ended up in the hospital. All the police can tell her is that she was in a car accident and the other driver still hasn't been found.

Soon after coming to, Quaid Fields, a high profile defense attorney, comes to visit her. To her surprise, he offers her a hundred thousand dollars to 'help her get back on her feet.' Realizing that this sort of money never comes without a catch, she doesn't want to take the bait.

However, after learning that she lost her job and are now facing mountains of education and medical bills, she may have no choice. And if she does accept, what does that say about the kind of person she really is?

“It’s nine on a Friday night and you’re nineteen years-old, shouldn’t you be out having fun or something?”

I rolled my eyes and grimaced when my best friend answered the phone with her usual lecture.

“A simple ‘Hello’ works wonders too, ya know,” I said, distracted as I searched through my purse to find my car keys. “You know that I have class on Friday nights, so save it.”

Ava’s rich, throaty laugh came through the line, so addictive it forced me to grin. “You know I’m teasing. How was it tonight?”

I finally managed to find my keys and threaded them between my fingers, closing my fist. Voila. My own Freddy Krueger-style weapon, responsible for getting women such as myself through dark parking lots since God knows when. I stepped out into the deserted parking lot, the chilly, early-November air sending a shiver through me. I’d parked under a light, as close as I could get to the entrance of the community college. My last class had gotten out half an hour earlier, but I’d been waylaid by a professor who’d wanted to chat about some of the comments he’d made on my latest research paper.

“Ehh, school is school,” I told her. “Some classes are better than others.”

“They can’t all be CSI-level stuff, Pres,” Ava reminded me dryly.

“I get that,” I said. “But can you tell me why anybody needs to take
Introduction to Computer Science
? I mean, why not have a course about walking? Or breathing?”

I’d been frustrated since the first day of class when my professor had introduced us to this novel thing called a keyboard. I’d seriously started doubting the veracity of my school’s reputation at that point.

Ava laughed again. I knew that she, of all people, understood my frustration with that particular course. She’d been a computer whiz since she’d laid her hands on her first hard drive. The technological complexities that baffled me, she could take apart and piece back together again. Bugs, malware, fried discs, and malfunctioning fans, you name it, she could fix it. “Just a few more weeks and the last of your introductory classes will be over,” she pointed out.

I kept my eyes and ears open as I walked, keys at the ready, and vaguely wondered if men ever felt the need to be so cautious when walking across a dark parking lot. Probably not, I thought as I reached my small, silver sedan. Being barely five foot two didn’t really help either. I’d taken a couple self-defense classes, but I only had so much to work with.

A slight shift in the light drew my attention. The shadows outside of my bubble of light shifted. I fumbled to insert my keys in the lock as a large figure stepped from the recesses of the darkness and drew closer to my cowering form.

Shit. Shit. Shit. A flash of metal had me panting as I finally got the key in the slot, hopped in the car and pressed the automatic lock button. I gripped the wheel until my knuckles turned white and checked my rearview mirror. The man stuck to the shadows, leaving me only with the impression of someone huge.

Granted, it could’ve been my imagination, but I wasn’t going to stick around to find out.

I heaved a sigh of relief as I pulled out of the parking lot, leaving the creepy man – or my imagination – behind.

“So what are you up to tonight?” I asked Ava, switching on the phone’s hands-free function. Safety first. It was a twenty-minute drive down dark back roads, and I appreciated the voice on the other end of the line keeping me company along the way. The maybe-person I’d seen or hadn’t seen had definitely rattled my nerves

And, like always, Ava was there. Ever since I was five years old, Ava had practically been my other half. When her family moved next door, we’d clicked almost immediately. It happened on our first day of kindergarten, when we’d walked to school together, and Ava had taken my hand to cross the street. In that moment, I’d known we’d be friends forever.

It was a friendship that had gotten us both through hard times. More than the average, typical teenage angst stuff – we’d definitely gone through that – but our connection ran much deeper. Ava’s parents had never had what you’d call a happy marriage. Even when we were little, she’d been forced to watch violent fights between her mom and dad almost every day. Stuff no one should ever have to witness. Definitely nothing a kid should see or hear.

During the worst of the fights, Ava had always escaped to my house. If it was late at night and my mom had already passed out, Ava would throw stones at my window until I opened it and helped her climb up. We’d huddle together in my bed and tell stories of the lives we’d lead when we’d grow up and still lived next door to one another. And about our babies who would grow up to be best friends too.

“Another exciting night in the life of Ava McCall,” she said. “One of my customers recommended me to a friend of his who needed a virus removed from his laptop. It amazes me what people search for on the internet and think nobody will ever find out about. Don’t these idiots know how to clear their search history? Especially if they’re going to hand their computer over to another person? That’s like Internet 101, for god’s sake.”

I laughed. “What is it this time?”

“Okay, so the guy comes to me with this old-as-shit machine and tries telling me with a straight face that one day his computer started randomly acting all glitchy. Out of nowhere, of course. He’s totally innocent. He spends all his time playing games and, like, watching videos of puppies and kittens or something. So anyway, I run a basic search of his Internet history and oh, surprise, surprise, there’s some of the most ridiculous porn I’ve ever seen in my life. I mean sites with names like peeonme.com and asianslutsneedaspanking.com, and those are just the two that stick out in my mind; there were at least a dozen others in the cache.”

“Wow – that guy’s been busy,” I said. “I hope you washed your hands after touching the keyboard.”

I’d always loved Ava’s blunt take on everything and everybody. Most things were cut-and-dried to her. She might not have graduated at the top of our high school class or even considered college since she’d always been more street smart than book smart, but she had the sort of innate intelligence that couldn’t be taught. I knew some seemingly smart people who could hardly tie their shoelaces, but Ava could read people in an instant. Her observations were normally spot-on. She could cut to the chase with no problem because she didn’t give a damn about what people thought of her.

“So I was thinking,” I said, changing the subject, “that Thanksgiving’s only three weeks from yesterday. We still on this year?”

“When are we ever not on?” she replied with a smile in her voice.

Every year since we were twelve, Ava and I had practiced a little holiday ritual. Since her parents inevitably wound up tearing the house apart by the end of the night, and my mother would rather take a bottle of wine to bed than sit down and enjoy a nice meal, Ava would come over and we would cook a little feast of our own. I’d been cooking for myself since I was around six, anyway, so it wasn’t much for me to put together Thanksgiving dinner.

“Maybe we should do it at your place,” she said. “My oven’s been acting up lately. Nothing ruins Thanksgiving like an undercooked turkey. We learned that the hard way.”

I snickered, remembering that particular Thanksgiving when we’d ended up with the trimmings since the turkey had needed an extra hour in the oven. “I’ve been so busy with school, my place is a mess. I don’t even have time to shop for groceries.”

“You know my kitchen’s way too small,” she pointed out.

That was true and I’ve spent enough time in my life trying to cook in a tiny kitchen with no counter space. I shuddered at the memory of my mom’s kitchen. You couldn’t even call it a kitchen. It consisted of a cooktop meant for camping and a ten-year-old toaster oven. That made my decision for me. “Yeah, you’re right. Let’s have it at my place.”

I’d only moved in over the summer, right after high school graduation. I’d saved every penny I’d earned from my after-school job, and as soon as I’d walked across that stage and got my diploma, I’d packed up and left. It couldn’t have come a day sooner, as far as I was concerned. This was my first major holiday in my new apartment. A momentous occasion. I’d been waiting forever to truly be on my own, and it was important to make fresh, joy-filled memories without the taint of my past.

“Awesome. Give me a call tomorrow and we’ll talk over the specifics,” Ava replied. “Let me know what I can bring over, what I can buy, that sort of thing. I’d make the whole grocery list by myself, but you know how absentminded I am when it comes to the domestic stuff. I’d probably get all the way home from the store and realize I forgot the turkey.”

The sad thing was, I could actually picture it. Her gunmetal gray eyes widening in horror as she scrambled back into the car and sped to the nearest grocery store. Probably sometime around noon on the day itself.

I planned to go a bit further myself. As a child, I daydreamed of working as a forensic scientist for the FBI. When I’d wanted to escape from my mother’s jibs and criticisms, I’d flip on the TV and get lost in the mysteries that threaded through countless crime shows. It was more than the blissful escape from reality that took over when I watched these shows. It was the concept of justice that I’d always loved. Putting together pieces of a puzzle, reconstructing faces, running DNA samples, solving cold cases.