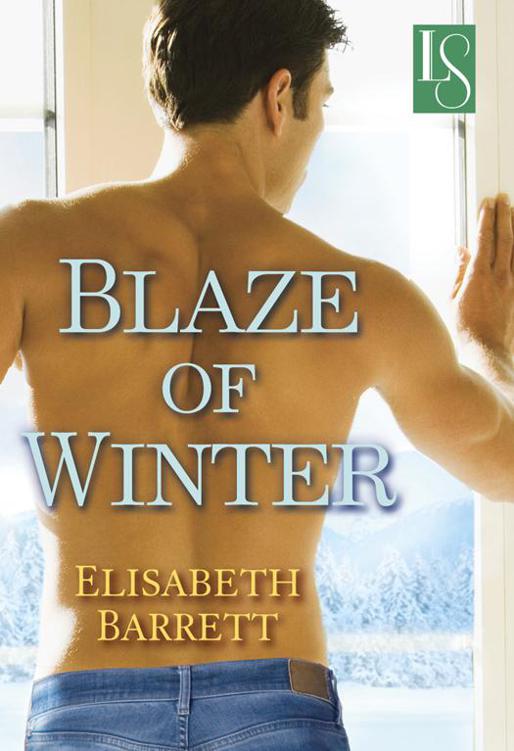 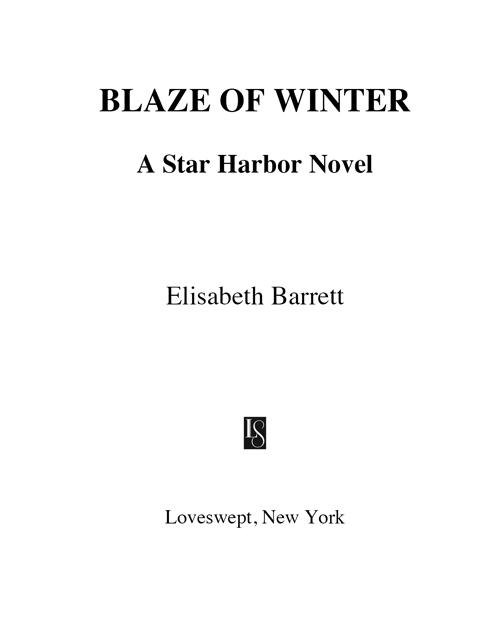 Blaze of Winter
is a work of fiction. Names, places, and incidents either are products of the author’s imagination or are used fictitiously.

LOVESWEPT and colophon are trademarks of Random House, Inc.

My romance doesn’t need a thing but you.

“Men,” Captain Aldous Crowley shouted, his auburn hair whipping in the wind as he paced back and forth on the quarterdeck of the
Valiant
. “We have been betrayed by General Strainhorn. In spite of our privateer status, and our legally issued letters of marque, we have been labeled pirates. Pirates! We all knew such a day could come and now it is here.”

Crowley looked off into the horizon where a ship-of-the-line was fast approaching them. Within minutes, they would be overrun.

“The
Justinia
is upon us. You know as well as I do that they intend to smite us to a man if we resist. And ’twill be the hangman’s noose for any of us unlucky enough to be captured.” On the main deck, trusting faces were upturned as the men hung on his every word. Knowing that they might all be dead within the hour, he stared back, trying to memorize the way they looked at this instant. He’d led them through many a battle, but never one with such inequitable odds.

With a firm hand, he drew his sword from his scabbard and thrust it into the air. “Death comes but once,” he roared.

“But the brave live forever!” his crew, to a man, yelled back.

Of all the possible pranks a person could pull in the Star Harbor Library, putting a dead fish in the heating vent ranked high on the list of ones to try. And Theodore Grayson would know. He’d played that very trick twenty years ago, with his brothers Cole and Seb as his partners-in-crime. Still, the risk—considerable, given that every wall vent in the main room was visible from the circulation desk—had been worth the payout. His large frame tucked into a carrel at the very scene of his youthful misconduct, Theo smiled at the memory.

They had done the deed in the middle of one of Star Harbor’s coldest winters, and with the heat on full blast, it had taken precisely thirty-seven hours for the smell to become overpowering. Even better, he and his brothers had all been present to witness the prank’s outcome—the unholy stench, a furious search for the source, and finally, a full evacuation of the library. And as any good trickster—Theo himself included—would acknowledge, a key component of every good prank was the payout.

The payout. The completion. The end. If only he could achieve the same with this damned book he should be writing. His smile faded fast.

“What the hell am I doing back in Star Harbor?” he groaned, shoving his chair back from the desk and abruptly standing up. An octogenarian seated on a nearby love seat flipped down Wednesday’s edition of the Boston
Globe
and gave him a disapproving look from beneath her tightly curled blue-tinted locks. In return, he gave her a dirty grin, and she let out a small gasp as her head disappeared in a rustle behind the Arts section.

Glancing around the library, he noted that nothing much had changed in twenty years. Same taupe walls, same signs over the reference desk, same green-shaded banker’s lamps on each long table. Only the posters displaying the covers of the latest bestselling books were
different. Wryly, he noted that his own book wasn’t represented. Theodore Grayson, better known as T. R. Grayson—Star Harbor’s native son, bad boy made good.

But perhaps not good enough to warrant a place on the hallowed walls of the library.

No one met his eyes as he glanced around, so he sighed and slouched back down into his seat, pulling it forward until his fingers were once again aligned with the keyboard of his laptop. Then he took off his glasses—the stylish frames had been a gift from his publicist—and rubbed his eyes, willing the thoughts, phrases, and sentences to come.

What the hell was wrong with him? In a few short months he’d gone from literary darling to feeling like a hack. He was in a funk, unable to make the stubborn words emerge from wherever they were hiding in his brain. A change of scenery—more accurately, a change of coast—hadn’t made a whit of difference. Trying to plot and write his latest book was just as slow-going here as it had been in San Francisco.

Worse yet, it wasn’t just the writing. He couldn’t quite put his finger on the problem, but it was obvious he was in some sort of a slump.

Over Labor Day weekend, Cole had mentioned that he might be able to find renewed inspiration in Star Harbor. At the time, he’d thought his brother’s idea was brilliant. Ditch his bohemian, intellectual lifestyle in San Francisco and reconnect with his roots by spending the fall in Star Harbor. It was the most beautiful time of year in his hometown, and he’d been certain it would give him the fuel he needed to write his book. Plenty of stimulation, ideas, and solitude.

But he hadn’t made it to town until just before Thanksgiving. Now it was December, Star Harbor was freezing, he hadn’t written a word, and the quiet was beginning to weigh on him like a millstone around his neck. Plus, he was bunking down with his brothers Val and Cole on Val’s small houseboat, which didn’t help matters at all. He’d known it would be a far cry from his spacious artist’s loft in San Francisco’s Mission district, but he hadn’t realized quite how bad it would be. How was he supposed to think, let alone write, when he couldn’t get a decent night’s
sleep in that tiny berth? The two months he’d planned to stay in town suddenly seemed like a life sentence.

He glanced up, expecting the old lady to cluck at him again. Instead, he found himself face-to-face with Emma Bishop, Star Harbor’s librarian and his friend Jimmy’s new wife. She and Jimmy had gotten married a couple of months before, but Theo had missed the wedding due to a book tour commitment. Emma looked good—shiny russet hair, sparkling blue eyes, and wire-rimmed glasses perched on a pert nose. Dressed in a tweed skirt and silk blouse, her small figure reminded him of an elegant little bird.

Before she could say anything, he raised his hand in apology. “Let me guess,” he said. “I’ve been reported.”

“You could say that,” she confirmed, shooting a quick glance at the love seat. The old lady had her face buried in the paper. Though Emma looked apologetic, there was a little twinkle in her eye. “Could you please keep it down? I’d hate to—”

“Kick me out?” Theo laughed. It wouldn’t be the first time. Except now he was thirty-two, not twelve.

“I don’t think it’ll come to that,” she said. “You’ll behave.” This was said with the hint of a smile. She knew how to handle him, all right. No surprise, given that her husband had been almost as much of a troublemaker as the Grayson boys back in the day.

Theo sighed and rose, stretching his arms up over his head. He knew his size was intimidating, but to her credit, Emma didn’t even blink. Being married to Jimmy, whose nickname was—appropriately—“the Bear,” must have inured her to intimidation by large men. He jerked his head in the direction of the lady. “You can tell my good friend over there that I’m leaving for the day.”

“I think I’ll leave well enough alone,” Emma said without rancor as she tilted her head at him. “But I hope you don’t mind my saying that you look tired, Theo.”

He began to pack up his laptop. “Let’s just say I haven’t gotten a full night’s sleep in over a week.”

“Out on Val’s boat? I’d imagine not. Are you sharing a cabin with Cole?”

Theo nodded. “Yep. As if the tiny berth wasn’t uncomfortable enough, I have my big brother in there to keep me company.”

Emma touched her forefinger to her chin and looked thoughtful. “There are some nice places in town where you could stay. Why don’t you look into it?”

La familia de Pascual Duarte by Camilo José Cela
Journey Across the Four Seas by Veronica Li
Pasadena by David Ebershoff
Small Wonder by Barbara Kingsolver
Remains of the Dead by Iain McKinnon
For Everything by Rae Spencer
Anais and the Broken War (The Blood Mage Chronicles Book 5) by Wilson, Jamie
Thirteen Hours by Deon Meyer
New and Selected Poems by Charles Simic
Crime in the Cards by Franklin W. Dixon
Our partner