Read Blessed are the Meek Online

Blessed are the Meek 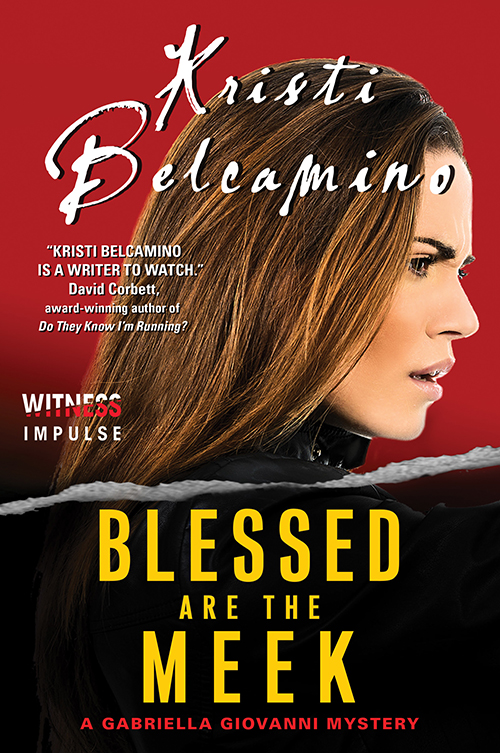 Blessed are the Meek

For my husband and two fierce daughters,

who are my everything.

H
EADLIGHTS ILLUMINATE A
small group huddled around a figure on the ground.

Waves slap against concrete, and seagulls silently glide on the wind, white specters in the night. Fog hovers low in stringy fingers billowing across the deserted parking lot.

Heads swivel at tires crunching on loose gravel. A car stops about a hundred yards away. A man in the middle of the group whips his body toward the light and sound. A flash of metal in his hand glints in the headlights before they shut off.

Another man grabs him from behind.

A larger man storms over, sticks his gun to the man's forehead, and in a low voice growls, “If you don't calm down .Â .Â . I'll take you out myself. Here's what we're going to do. Listen carefully, or you'll get the first bullet.”

Nobody moves. The larger man prods the smaller man along, holding the gun to his temple. “Now, take your gun, aim it, and fire.” The two men are now standing above the dark mound on the ground. The bigger man pushes his gun harder into the smaller man's temple. “What the fuck are you waiting for, man. Do it. Either you pull the trigger, or I do.”

The larger man shoves his gun into the guy's mouth.

“I can't,” the man says around the muzzle of the gun. Snot drips down his nose.

“Don't get your fucking boogers all over my piece. Fire your goddamn gun now.”

The man shakes. He closes his eyes, as if anticipating the explosion in his mouth.

The roar of a gun exploding behind them breaks the silence. All heads turn toward the sound. A dark figure steps back into the circle and looks around. “Okay. Who's next?”

The other two men step forward, taking turns firing into the mound at their feet.

“Okay, dickwad,” says the big man after he pulls his gun out of the smaller man's mouth and fires his own weapon into the mound. “You're the last one. Your turn. I'm tired of waiting. You either pull the motherfucking trigger, or I pull mine. I'm not going to tell you again.” The click of the safety coming off echoes in the silence.

The man trembles as he leans forward. He turns his head away as he squeezes metal to metal. The shot echoes in the darkness. He drops the gun as if it were a lit match and collapses onto his knees, keening and weeping. “It wasn't supposed to be like this. This was never supposed to happen. This is a fucking nightmare. Oh God, forgive us, please. Forgive me.”

The man leans over, retching and vomiting. A dim streetlight illuminates the contents of his stomach splashing up from the ground.

“Yeah,” another guy mutters. “We're all in it togetherâÂ­up to our motherfucking eyeballs.”

Twenty feet away, the driver of the car clenches his gun but is frozen.

A look of horror blankets his face.

E
VERY ONCE IN
a while, a breeze lifts the white plastic sheet off the naked body lying in the dirt at my feet. When the wind blows, I catch snapshots of a man's very fit, very naked, and very dead body. I try not to stare. But I can't keep my eyes off it.

Besides, it's my job to look.

I don't want to bring attention to myself by whipping out my reporter's notebook and taking furious notes, but inside I am mentally recording everything I see and hear.

The body lies in a patch of weeds on the side of the rural California highway and is circled by half a dozen pairs of shoes, including the round toes of my black patent leather pumps. A mix of California Highway Patrol officers and local street cops gather in a ring around the dead man. They chat about the sheriff's race and wait for the tow truck to haul the man's car out of the creek bed at the bottom of a steep ravine.

I see the body in flashes as the sheet rises and falls in the wind: A lock of blond hair. Long dark lashes. Full sensuous lips. Smooth, tan chest. Defined abs. Narrow hips. Brief glimpses of flesh are revealed as one officer repeatedly reaches down and pulls the sheet back over the body without pausing in his conversation or taking his eyes off his colleagues. Cars whizz by the wide, dirt shoulder where we stand. I seem to be the only one flustered by the corpse in our midst, but I try to play it cool. If I act like one of the guys, they'll forget I'm a reporter.

I keep waiting for the cops to shoo me away, but they don't. It's a car crash, not a crime scene. Guess that's why the cops are letting me in for the close-Â­up while I wait for the public-Â­information officer to arrive. That, and the fact that the sergeant in charge knows meâÂ­he lets me buy him lunch every once in a while on the newspaper's credit card.

The wind flutters the sheet again. The breeze brings with it the heavy scent of wildflowers from a nearby hill. It seems incongruous with the dead body at my feet. I slit my eyes and look down again. A strong gust of wind takes the sheet completely off, so it puddles at one officer's feet. This time when he crouches, he anchors the sheet with a few rocks.

“I think it's more strange he's bare-Â­ass naked, but who am I to judge? Different strokes for different folks,” Sgt. Craig Markson says. “Besides, there's blood all rightâÂ­on the back of his head.”

He puffs out his chest a bit. I get the feeling he's showing off a little by “instructing” the girl reporter on the intricacies of death. “Most die from what you don't see. It looks like they are napping, but inside, the aorta is severed from the heart. That's the way most of 'em go.”

Markson is a suffer-Â­no-Â­fools city cop who has probably investigated hundreds, if not thousands, of fatal car crashes during his twenty years on the force. His days at the gym were long ago replaced by visits to the all-Â­you-Â­can-Â­eat buffet, but his eyes are usually crinkled in a smile. He's always done right by me, so I don't take his words as patronizing.

“Sometimes there is. Sometimes it's a freakin' horror show when we show up.”

I nod. I once watched blood seep in rivulets out of a smashed passenger door as a tow truck hoisted it into the air.

“Sarge, you got the name?” I say it casually, but in my head, I'm crossing my fingers.

I want to get a jump start on my story. Usually, a traffic fatality is a short story in the paper with the victim's name. That is, unless it is someone famous. The San Francisco Bay Area has its fair share of celebrity faces. Music Promoter Bill Graham died only a few miles from here when his helicopter went down in a storm. It's always worth checking. You wouldn't want to be the newspaper reporter caught writing a two-Â­inch brief about a car crash victim who was the latest
American Idol
star or something. This one might be worth more than a paragraph simply because the guy was driving around naked. Although it's not the first time I've written about nude drivers. The last naked guy I wrote about was drunk and masturbating when he caused a four-Â­car crash.

Markson flips through his own tiny notebook. “You know, Gabriella, I trust you, so don't burn meâÂ­don't go with this until it's confirmed. If he was driving his own vehicle, then it shows it was registered to Sebastian Laurent, thirty-Â­four, San Francisco.” Then he winks at me, and says, “Plus, that's what his license says, too.”

I lean over his shoulder and make sure I get the spelling of the name right. “Thanks, Sarge.”

A few minutes later, the coroner's rigâÂ­an extra long, unmarked, windowless vanâÂ­pulls up. Two deputies, dressed in navy jumpsuits with the word
CORONER
on the back, open the van's doors and unfold the gurney's wheels. The tow-Â­truck operator, cranking a wench, finishes pulling the car out of the ravine. It's a fancy black car. I hear a low whistle from one of the cops. Everyone turns to look.

“Fucking nice ride,” someone says under his breath.

“Lamborghini?” another cop says, squinting as he looks at the car, which has mud adhering to all four tires.

“Nope,” another cop says. “That beauty is a McLaren F1. Fastest and most expensive car in the world.”

A highway patrol officer is crouched down looking into the open door of the carâÂ­which is pointed up in the sky like a wingâÂ­when he yells, “Hey, Markson, come take a look at this.”

With a frown, Markson hitches up his gun belt and walks over. I follow him, trying to be unobtrusive. The officer is pointing to a small shiny thing on the sleek black leather seat. It looks like a bullet casing. Markson's forehead crinkles as he looks at it. He turns to where the coroner's deputies are transferring the body onto a gurney.

“Hold up, guys.” When he gets to the body, he looks at a coroner's deputy. “Do me a favor, buddy, turn him over. On his stomach.”

The deputies flip the body facedown onto the gurney.

Markson pulls on some latex gloves and leans over. He pushes aside a patch of bloody, matted blond hair. Even from a few feet away, I see it. A bullet hole.

“I'll be goddamned.” He is shaking his head. He picks up the man's floppy hands and examines both sides, one by one. I didn't notice before, but now I see that fingernails on both hands are bruised a purple-Â­black, and the knuckles are scabbed over.

“What the hey?” Markson says. He probes the fingers and palms of the hand. “Huh. He must have got in a fistfight with a brick wall or something recently, but I don't see no residue,” he mutters to himself. He looks over at one of the detectives walking back from the car. “Any gun?”

“No, Sarge. Car's clean. Nothing but his clothes and these.” He dangles a pair of lacy red panties from one finger. A few Â­people snicker.

Markson hitches up his pants again and turns to another officer. “Call homicide.”

I'm trying not to be obvious as I pull my notebook out and fire off some scribbles. But I'm not sneaky enough. Beneath a furrowed brow, Markson's eyes meet mine.

“Gabriella, get the hell out of here,” he says, and turns to the cop beside him. “Get out the tape, string it up, and mark it off. We got ourselves a crime scene here, folks.”

Tale of Johnny Town-Mouse by Potter, Beatrix
Justice for Boone: Badge of Honor: Texas Heroes, Book 6 by Susan Stoker
The Ghost Walker by Margaret Coel
This Body by Laurel Doud
La decadencia del ingenio by Jaime Rubio
Why Should White Guys Have All the Fun? by Lewis, Reginald
All the Land to Hold Us by Rick Bass
How Evan Broke His Head and Other Secrets by Garth Stein
Wild Honey by Suzanne Forster
Love On The Line by Kimberly Kincaid
Our partner