Read Blessed Are Those Who Thirst: A Hanne Wilhelmsen Novel Online

Blessed Are Those Who Thirst: A Hanne Wilhelmsen Novel 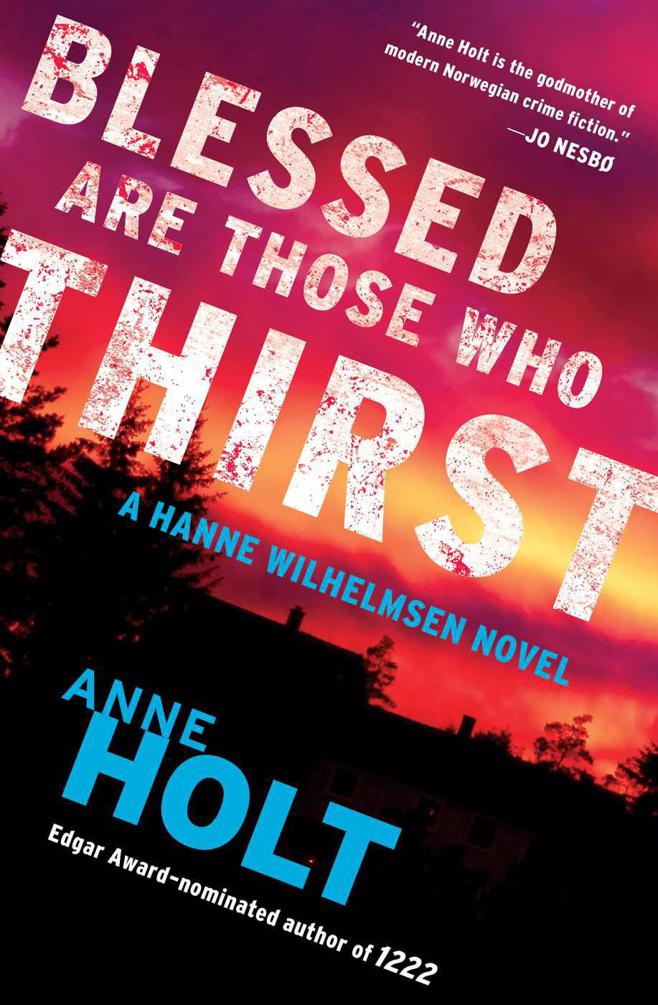 “Step aside, Stieg Larsson. Holt is the queen of Scandinavian crime thrillers.”

“A good old-fashioned murder mystery. Wherever Hanne shows up next, my advice is to follow that wheelchair.”

“Anne Holt is the godmother of modern Norwegian crime fiction.”

—Jo Nesbø, author of
The Snowman

“Holt proves a masterful plotter. Unexpected twists hold up to scrutiny, loose ends are tied up, and the finale leaves readers wanting more.”

“In the hard-boiled vein of Dashiell Hammett. It’s a good old-fashioned mystery.”

Thank you for purchasing this Scribner eBook.

Death of the Demon
Excerpt

To Even, my friend and brother

Blessed are those who hunger and thirst after righteousness, for they will be filled.

I
t was so early not even the devil had managed to put on his shoes. In the west, the heavens showed that intense hue only a Scandinavian sky in springtime is blessed with—royal blue on the horizon and lighter toward the meridian, before dissolving into a pink eiderdown where the sun was still lying lazily in the east. The air was invigorating, undisturbed by the dawn, with that amazing transparency possessed by radiant spring mornings at almost sixty degrees north. Although the temperature remained in single figures, everything indicated it would be another warm May day in Oslo.

Detective Inspector Hanne Wilhelmsen wasn’t thinking about the weather. She was standing completely motionless, wondering what she should do. There was blood everywhere. On the floor. Across the walls. Even on the ceiling, dark spatters resembled the abstract pictures in some kind of psychological test. She tilted her head and stared at a splodge directly above her. It looked like a purple bull with three horns and deformed hindquarters. She stood motionless—a sign of indecision, but also an indication of her fear of sliding on the slippery floor.

“Don’t touch,” she warned brusquely, when a younger colleague, who had hair color to match the blood, made a move to lay his finger on one of the walls. A narrow crack in the ramshackle roof cast a dusty beam of light on the rear wall, where the blood was spread so generously it looked less like a drawing than a horrendously bad paint job.

“Go outside,” she ordered. Hanne sighed but refrained from
commenting on the footprints the inexperienced police constable had scattered around large areas of the floor. “And try to walk in your own footprints on your way out.”

A couple of minutes later, she did the same herself, backward and hesitant. She continued to stand in the doorway, having sent the officer for a flashlight.

“I was just going for a piss,” wheezed the man who had called in the report. Obediently, he had remained standing outside the shed. Now he was hopping so agitatedly Hanne Wilhelmsen suspected he hadn’t been able to complete his mission an hour earlier.

“The lavatory is there,” he said, quite unnecessarily. The strong smell from one of Oslo’s all too many remaining outside toilets took the edge off the sickeningly sweet stench of blood. The door marked with a heart was right beside it.

“Well, off you go to the toilet,” she encouraged him in a friendly tone, but he didn’t hear her.

“I was going for a piss, you see, but then I saw the door in there was open.”

Now he pointed at the woodshed, taking a step backward, as though a hideous animal might thrust out its jaws at any moment and gobble up his whole arm.

“It’s usually closed. Not actually locked, but closed. The door is so heavy it stays open by itself. We don’t want stray dogs and cats making themselves at home in there. So we’re quite careful about that.”

A strange little smile spread across his coarse face. It occurred to Hanne that they looked after things even in this neighborhood; they had rules and kept order, even though the battle against decay was being lost.

“I’ve lived here in this block all my life,” he continued, with a touch of pride. “I notice when things aren’t as they should be.”

He glanced at the pretty young lady who didn’t look like any cop he had seen before, waiting for a scrap of recognition.

“Good stuff,” she praised him. “It was great you phoned to let us know.”

When he smiled, with his mouth open, Hanne was struck by how few teeth he possessed. He couldn’t be very old, perhaps fifty.

“I was absolutely terrified, you understand. All that blood . . .”

His head moved from side to side. It had been awful, being faced with such a diabolical sight.

Hanne could well appreciate that. Her red-haired colleague had returned with a flashlight. Gripping it with both hands, Hanne Wilhelmsen shone the beam of light systematically from side to side down over the walls. She scrutinized the ceiling as thoroughly as was possible from the doorway, and then zigzagged the ray of light across the floor.

The room was entirely empty. Not so much as a stick of firewood, only some odds and ends attesting that the shed had once been used for its original purpose, probably a long time ago. Once the flashlight had made contact with every single square meter, she ventured into the shed once more, carefully stepping on her own old footprints. She gave a hand signal that told her colleague not to follow. Right in the middle of the room, approximately fifteen square meters, she hunkered down. The beam of light stirred on the wall opposite, about a meter above the floor. From the doorway she had noticed something, perhaps letters, written in smeared blood, making the symbols difficult to decipher.

They weren’t letters. They were numbers. Eight digits, as far as she could make out: 92043576. The figure 9 was unclear and might perhaps be 4. The final digit looked like a 6, but she was not sure. Maybe it was an 8 instead. She straightened up and stepped back again into the daylight, now abundant. She heard a baby crying from an open window on the second floor and shuddered at the thought of children having to live in such a district. A Pakistani in a tram driver’s uniform emerged from the brick building, peering nosily at them for a moment before scurrying
away from the entrance. She could see in the reflections on the highest windows that the sun had hauled itself up at last. Birds, the small gray ones that still managed to eke out a meager existence in the innermost center of the city, were chirping tentatively from a half-dead birch tree that was making a futile attempt to reach out toward the streaks of morning light.

“Bloody hell, what a terrible crime this must be,” the young constable commented as he spat, in a vain effort at ridding himself of the taste of sewage. “Something terrible must have happened here!”

He seemed happy at the thought.

“Yes indeed,” Hanne Wilhelmsen said softly. “Something serious may well have happened here. But in the meantime . . .”

She broke off and turned to face her colleague.

“At the moment, this isn’t a crime. For that, we need a victim. We haven’t seen a single trace of that. At the most, this is willful vandalism. But . . .”

She peered through the door again.

She shivered slightly. It was due more to her speculation about what she had just witnessed rather than the fresh morning air. Pulling her jacket snugly around her, she thanked the toothless man one more time for alerting them before strolling on her own back the three hundred meters to Oslo police headquarters. When she crossed over to the other side of the street, into range of the morning sunlight, it grew warmer. A tumult of international women’s voices, morning shouts in Urdu, Punjabi, and Arabic, reverberated around the corners of the houses. A kiosk owner was going about his business, readying his sidewalk stand for another long working day, opening out the whole shebang with no consideration for either churchgoing or regulations about opening hours. He flashed a friendly white smile at her,
holding out an orange and raising his eyebrows questioningly. Hanne Wilhelmsen shook her head and smiled in return. A gang of fourteen-year-old boys was clattering over the sidewalk with their blue
Aftenposten
newspaper delivery buggies in tow. Two veiled women hurried to some destination or other, eyes downcast. They walked in a large arc around the detective inspector, unused to seeing white women so early in the day. Otherwise, it was fairly deserted. In this weather, even Tøyen took on a conciliatory, almost charming character.

It certainly promised to be yet another beautiful day.

W
hat on earth were you working on over the weekend? Don’t you think we have enough of a slog every day of the week?”

Police Attorney Håkon Sand was standing in the doorway. His jeans were new, and for once he was wearing a jacket and tie. His jacket was slightly too large and his tie was a touch too broad, but nevertheless he looked reasonably put together. Apart from the hemline on his jeans. Hanne Wilhelmsen couldn’t resist leaning in front of him, speedily tucking the superfluous centimeters inside so they couldn’t be seen.

“You shouldn’t walk about with the turn-up on the outside.” She gave a friendly smile and stood up. She smoothed her hand down his arm with a light, almost tender, movement.

“There. Now you’re fantastic. Are you going to court?”

“No,” replied the prosecution attorney, who, despite the well-meaning gesture, felt embarrassed. Why did the detective inspector have to draw attention to his lack of fashion sense? She could have saved herself the trouble of doing that, he thought, though he said something different.

“I’ve a dinner date right after work. But what about you, why were you here?”

A pale green folder hung poised in the air before landing precisely on Hanne Wilhelmsen’s blotter.

“I just received this,” he went on. “Strange case. There have been no reports of either dismembered people or animals in our area.”